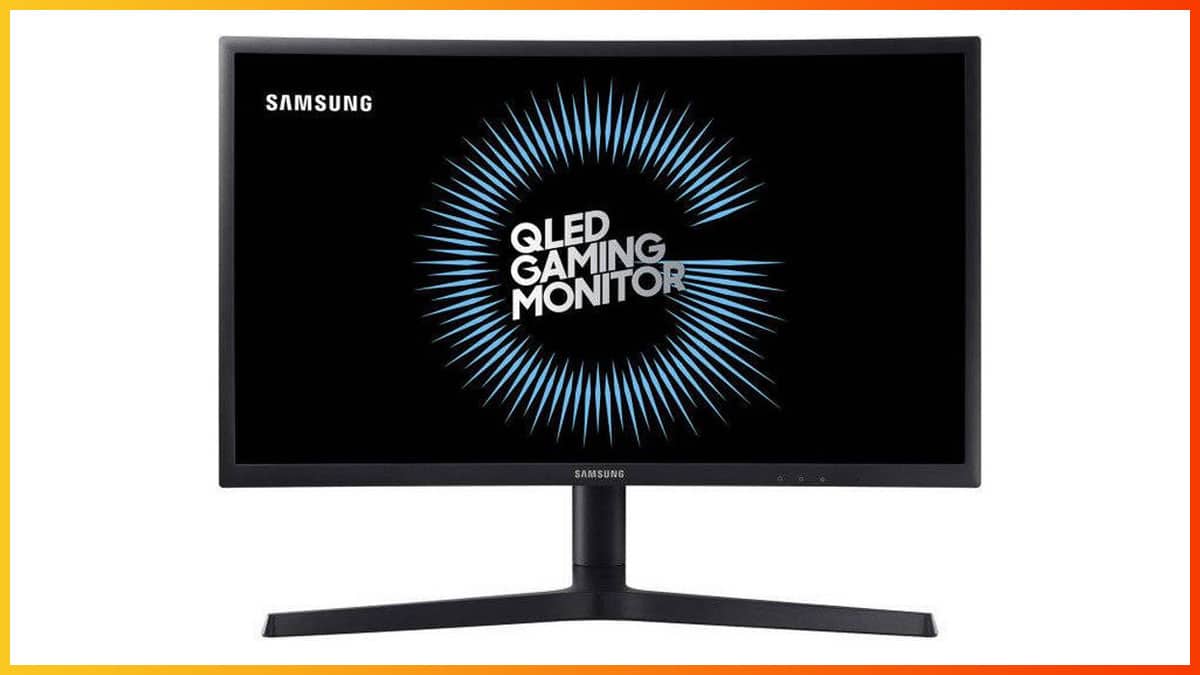 The Samsung C24FG73 is a 24″ 1080p 144Hz gaming monitor with vibrant colors, a high contrast ratio and a decent response time performance for a VA panel.

In essence, these are almost identical gaming monitors; the CFG73 series have fixed (some) issues with flickering and purple artifacts associated with the CFG70 models.

Moreover, the CFG73 monitors have an upgraded stand, but no RGB lighting technology.

The Samsung C24FG73 monitor is based on a VA panel with a QDEF (Quantum Dot Enhanced Film) layer, which allows for an extended color gamut with a 125% sRGB gamut size.

In addition to the superior 3,000:1 static contrast ratio and strong 350-nit peak brightness, the monitor offers an immersive image quality with vibrant and bright colors as well as deep and vivid blacks.

While 1080p screen resolution may be too low for some users, it does provide a decent amount of pixel density on the 23.5″ screen of the monitor.

So, there’s a reasonable amount of screen space available, details are sharp, and more importantly, it is not very demanding on your PC system.

There’s minimal backlight bleeding and no dead pixels, while the 178-degree wide viewing angles cause only minor changes in contrast when the screen is looked at strange angles (far from the sides or far from below/above).

The C24FG73 Samsung quantum-dot monitor has an impressively low input lag performance of around 4ms, which makes for imperceptible delay between your actions and the result on the screen.

Furthermore, once you set the Response Time setting in the OSD (On-Screen Display) menu to ‘Faster’ or ‘Fastest’, the monitor enables the 1ms MPRT technology which via backlight strobing further decreases motion blur and ghosting in fast-paced games.

Alas, in darker scenes where there are a lot of dark pixels involved, some smearing will be noticeable, but to a tolerable degree.

So, if you’re looking for a 144Hz monitor for competitive gaming, you’d still be better off with an IPS panel display with a 1ms (GtG) response time speed at this price range, though then you wouldn’t have as high contrast ratio.

Keep in mind that, while the motion blur reduction technology is enabled, it reduces the monitor’s maximum brightness to around ~230-nits, which is still quite bright.

If you haven’t yet experienced 144Hz, you’ll be amazed by the extra fluidity and responsiveness it brings to fast-paced gameplay – or any game where you can get over 100FPS (assuming the game isn’t locked to 60FPS).

Note that many CFG73 models still suffer from the flickering issue of the CFG70 series.

While AMD FreeSync is active, some CFG73 units will have horizontal lines/flicker at the bottom of the screen. In video games, it’s not that noticeable, but for desktop use, it is rather bothersome, forcing you to disable FreeSync when not gaming.

The CFG73 also supports AMD FreeSync but with a rather limited dynamic range of 70-144Hz.

As long as your FPS (Frames Per Second) stays within that range, there will be no screen tearing or stuttering.

In case your FPS drops below 70, the AMD LFC (Low Framerate Compensation) technology kicks in and makes the display’s refresh rate double or triple the frame rate for smoother performance, but it won’t be as smooth as between 70-144FPS.

Note that you cannot use AMD FreeSync and the 1ms MPRT technology at the same time.

For FreeSync to work, you will need a compatible AMD graphics card or an Xbox One/S/X console. You can use the monitor with PS4/Pro as well, but you won’t benefit from the dynamic refresh rate.

However, some units are affected by the VRR brightness flickering issue, which is common for all monitors based on Samsung’s VA panels.

The Samsung C24FG73 is equipped with plenty of gaming features in addition to FreeSync and 1ms MPRT.

In the OSD menu, you will find pre-calibrated picture presets for FPS, RTS, RPG, and AOS gaming genres and Black Equalizer, which improves visibility of objects in the dark. You can also save your settings in three Game Setting profiles.

The monitor is factory-calibrated, it has an integrated harmful-blue light filter, and it’s flicker-free when not using the backlight strobing technology.

The Arena Lighting RGB technology is not available on the CFG73 models, but the new stand is much better.

In fact, at that price range, you can get a 1080p 240Hz display instead for competitive gaming – or a 1440p 144Hz curved monitor for a lot better image quality.

Under $200, you can also get a 1080p 144Hz IPS display, such as the AOC 24G2 or the LG 24GN650. These IPS models may not have as high contrast as the VA variants, but they offer more vibrant colors and faster response time for less smearing.

Although the Samsung C24FG73 offers a gorgeous image quality and fluid performance, it’s not without its issues, including a rather high price tag.

Consider it only if you find it on a big sale, and if the retailer has a good return policy in case you get a defective unit.