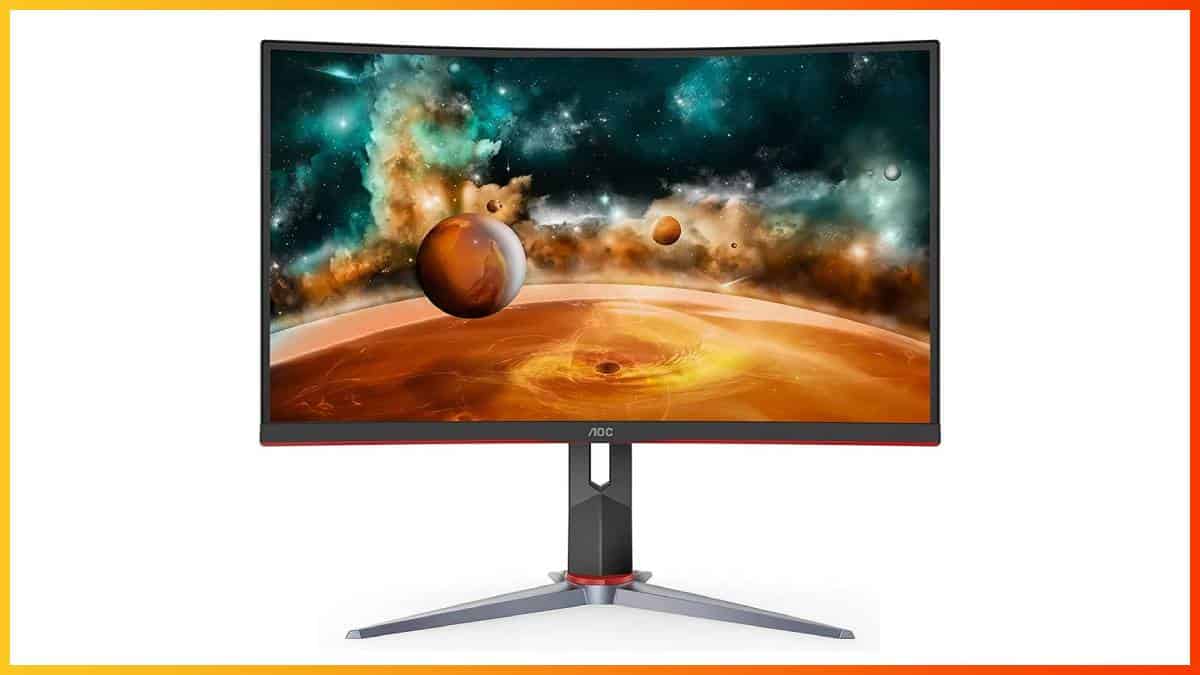 The AOC CQ27G2 is an affordable 1440p 144Hz gaming monitor yet it offers a high contrast ratio, a wide color gamut, and plenty of features including FreeSync, 1ms MPRT, and an ergonomic design! Sadly, it has a slow response time speed and VRR brightness flickering issues.

The AOC CQ27G2 is the updated model of the popular AOC CQ27G1 budget 1440p 144Hz curved gaming monitor, with the main difference between the two being in the design.

Based on a VA (Vertical Alignment) panel by Samsung, the AOC CQ27G2 monitor has a high static contrast ratio of 3,000:1, a peak brightness of 250-nits, 8-bit color depth support, and 178° wide viewing angles.

Such high contrast ratio makes for inky blacks and bright whites; it is the main asset of this panel technology, and it makes the blacks of other panels (IPS and TN) appear grayish in comparison.

The peak brightness of 250-nits may seem low on paper, but the monitor will be more than bright enough under normal viewing conditions. In fact, you’ll want to reduce the brightness a bit out of the box.

Regardless, you can use the sRGB mode in the monitor’s color temperature settings to restrict the color output to ~100% sRGB for a more accurate color representation.

Sadly, you cannot adjust the brightness in this mode; it might be too bright for some users, particularly in dark rooms.

Moving on, the AOC CQ27G2 sports the 2560×1440 Quad HD resolution, which looks great on its 27″ sized screen. You get the ideal 108 pixels per inch ratio, which results in plenty of screen space and sharp details!

Thanks to its high resolution, good color accuracy, and excellent contrast ratio, this gaming monitor is also great for watching movies, work, content creation, and everything in-between!

Of course, if you’re a professional photo editor, an IPS panel monitor will suit you better due to better color consistency.

AOC specifies a response time speed of 1ms for the CQ27G2, but this refers to its MPRT (Moving Picture Response Time) measure, not the usual GtG (gray to gray) pixel transition speed, which is not specified.

As expected from a VA panel display, some pixels won’t be able to change from dark into brighter pixels in time with the refresh rate, thus causing visible black smearing in fast-paced games.

The amount of smearing, however, is negligible unless you’re a hardcore competitive gamer or particularly sensitive to it. In more graphically-oriented games, you’ll hardly notice any smearing, and it’s mainly visible in dark scenes.

You can enable MBR (Motion Blur Reduction) in the monitor’s OSD (On-Screen Display) menu, which strobes the backlight to reduce perceived motion blur.

MBR can’t be used at the same time as FreeSync, though, and it reduces the monitor’s maximum brightness.

Luckily, AOC allows you to manually adjust the strobing frequency between 1 to 20 in increments of 1.

At ’20’, the picture becomes very dim, but the motion gets much clearer while at ‘1’, the image is only slightly darker, but the motion is barely any smoother. So, it’s best to set it to ’10’, and fine-tune it a bit to your liking from there.

For the best pixel response time performance, make sure to change the monitor’s Overdrive setting to ‘Strong.’

Other overdrive modes (Off, Weak, and Medium) are slower, and since the Strong mode doesn’t add any inverse ghosting, it’s definitely the best option.

Finally, the AOC CQ27G2 input lag is imperceptible at just ~5ms of delay between your actions and the result on the screen.

As an alternative to MBR, you can use FreeSync for a variable refresh rate, which eliminates all screen tearing and stuttering within the monitor’s dynamic 48-144Hz range.

FreeSync also works below 48Hz/FPS by triggering the LFC (Low Framerate Compensation) technology, which changes the monitor’s refresh rate to multiples of the FPS (47Hz -> 94FPS) for smoother performance.

Note that the monitor is not certified as G-SYNC compatible by NVIDIA. It’s often mistaken as such because of a similarly named certified model, the AOC 27G2. However, that’s a 1080p 144Hz IPS gaming monitor.

Using FreeSync with compatible NVIDIA cards will have varying results depending on your particular unit of the monitor, your GPU, and your GPU drivers.

Just like with most gaming monitors based on Samsung’s VA panels, FreeSync brightness flickering may occur when your FPS drops below 48FPS and triggers LFC, or when your frame rate fluctuates a lot.

Moving on, the OSD menu of the AOC CQ27G2 display is pretty straightforward with all the standard image adjustment tools, as well as some additional useful features available.

Navigation through the menu, however, is not as good as there are four hotkeys and a power button, but no joystick.

Pressing the hotkey with an arrow facing right will place a cheat crosshair on your screen.

Lastly, the monitor has a built-in low-blue light filter, which, along with its flicker-free backlight, ensures a comfortable viewing experience that’s easy on your eyes even after prolonged use.

The design of the monitor is excellent, considering its budget-friendly price. The stand is sturdy and even offers height adjustment up to 130mm as well as -5°/20° tilt and +/- 30° swivel. You can also mount the screen (100x100mm VESA).

Unlike the previous-generation monitors with 1800R curved VA panels, the CQ27G2 has a more aggressive 1500R curvature for added immersion.

Still, since it’s only a 27″ sized display, the curvature is not particularly noticeable, but it’s a nice touch.

The monitor has a matte anti-glare screen coating, which eliminates reflections, but doesn’t make the picture appear grainy; the chassis is 3-side borderless, and there’s a cable management hole.

Connectivity options include two HDMI 2.0 ports, DisplayPort 1.2 and a headphone jack. All display connectors support 2560×1440 up to 144Hz as well as AMD FreeSync.

There are also the AOC CQ27G2U (curved) and the AOC Q27G2U (flat-screen) models with the same specs – plus integrated 2W speakers and a quad-USB 3.0 hub. Sadly, these models are not available in the US at the time of this writing.

The AOC CQ27G2 goes for ~$280, which is a decent price considering its specifications and features.

Now, the main concern with this monitor is the slow response time and FreeSync brightness flickering issue, but you’re running this risk with pretty much any high refresh rate gaming monitor (excluding the more expensive Odyssey G7 and G9 models).

If you’re not sensitive to screen tearing, you can just disable FreeSync in games where brightness flickering occurs. A lot of gamers also won’t be bothered by the amount of dark level smearing.

These IPS models offer flawless VRR performance and a fast response time speed for no ghosting, but the contrast ratio is not as high at around 1,000:1.

All in all, if you’re not too sensitive to screen tearing and smearing of fast-moving objects in dark scenes and you’d rather have a high contrast ratio for deep blacks and an immersive viewing experience in a dark room, the AOC CQ27G2 is a great gaming monitor. Otherwise, there are better alternatives at this price range.