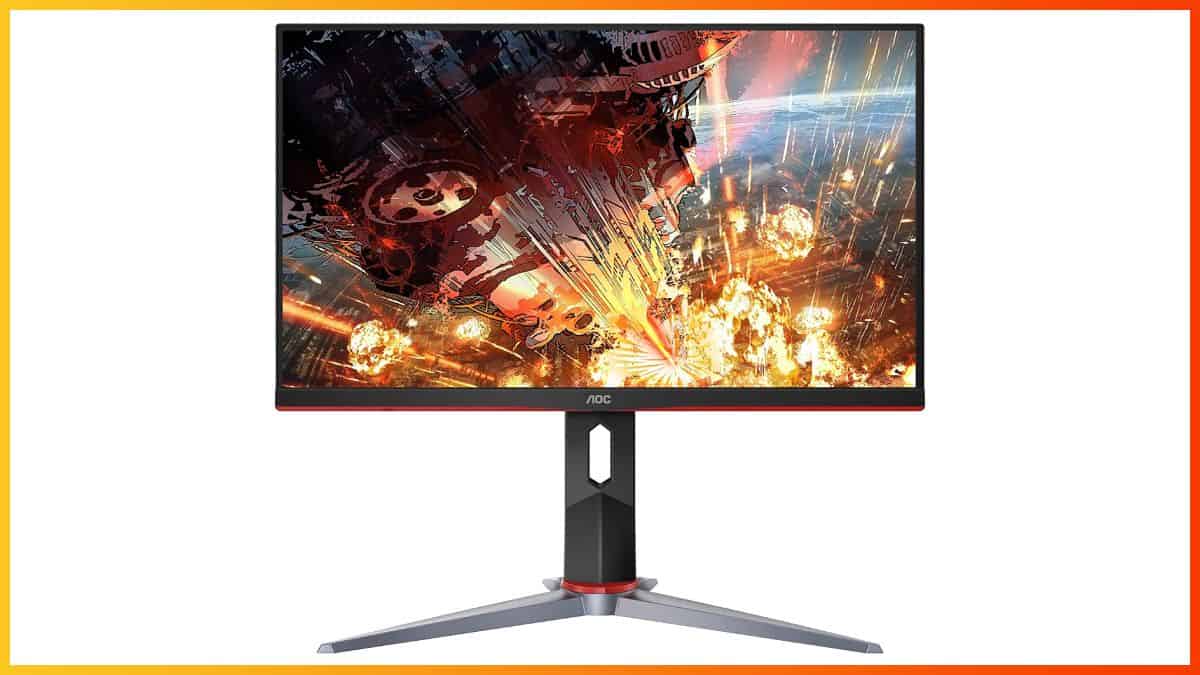 The AOC 24G2 is the best budget gaming monitor available. It offers smooth performance, a great image quality, plenty of useful features, and excellent design quality. All that for a very appealing price.

Update: AOC replaced the panel they’re using for the AOC 24G2/U. Basically, there are two versions of the AOC 24G2 being sold, you can learn more about the differences here.

For gamers on a tight budget, it’s the ideal gaming display that many have been waiting for.

The AOC 24G2 monitor is based on an IPS panel by PANDA with wide 178° viewing angles, a 250-nit specified peak brightness (which even gets a bit above 300-nits), a ~1,000:1 static contrast ratio and dithered 8-bit color depth (6-bit + 2-bit FRC), which is indistinguishable from true 8-bit depth in real use.

Now, this is an entry-level high refresh rate IPS panel display that serves as an alternative to the popular TN and VA models.

Besides offering the most accurate color reproduction and the widest viewing angles, IPS panels also offer a good balance between TN and VA variants when it comes to the overall performance and image quality.

It gets better: VA panels offer the best contrast ratio (~3,000:1), which results in deeper blacks as opposed to TN and IPS displays with a ~1,000:1 contrast ratio.

However, IPS panels still offer punchier colors, and they don’t have black smearing issues associated with most VA panels, which is why most users prefer the IPS technology.

Moreover, the monitor covers 126% of the sRGB color space for more saturated and lifelike colors. Not all users prefer this saturated look as it makes colors appear neon-like: reds can appear pinkish, yellow is a kind of orange, etc.

Luckily, the AOC 24G2 has an sRGB mode, which limits the color gamut to the standard sRGB space for more accurate color reproduction.

Alas, in this sRGB mode, the brightness is locked to 90/100, and there’s no way to decrease it. Some users might find this mode to be too bright, especially in a dark room.

Since this is a 24″ display, 1080p resolution provides a decent pixel density of 92.56 PPI (pixels per inch), which results in plenty of available screen space and sharp non-pixelated details.

But here’s the kicker:1080p is not very demanding on your GPU/CPU, allowing you to take full advantage of the monitor’s 144Hz refresh rate even with budget/mid-range PC builds.

Moving on, IPS monitors usually have a faster pixel response speed than VA panels, meaning that you won’t get noticeable smearing of dark pixels in fast-moving games.

While their response time isn’t as fast as that of some TN panels, it’s quick enough to eliminate most of the motion blur and trailing of fast-moving objects.

Although AOC doesn’t specify the gray to gray (GtG) response time speed of the 24G2 display, PANDA states a 7.5ms speed in which AOC managed to get down to ~5ms with the use of overdrive.

Simply put, some minor motion blur is noticeable in fast-paced games but significantly less than what you might see on VA panels.

And the good news? Gamers on a budget will finally be able to enjoy competitive FPS titles with excellent image quality, but without any prominent motion blur.

Moreover, the AOC 24G2 has four response time overdrive modes (Off, Weak, Medium, and Strong). For the best results, you can use the Strong preset, but note that at lower frame rates, it can introduce pixel overshoot or inverse ghosting, in which case you should stick with the Medium preset.

Another crucial thing to note regarding IPS panel displays is IPS glow, which is an expected downside of this panel technology.

Here’s the deal: when excess light passes through the panel, there is noticeable glowing around the corners of the screen.

The intensity of IPS glow varies between different units of the monitor. Generally, it’s only noticeable when you have a pitch-black background on your screen with a high brightness setting and no ambient lighting whatsoever in your room. It’s completely manageable except for the most extreme cases, i.e. defective panels.

Setting the Overdrive to ‘Boost’ activates the MBR (Motion Blur Reduction) technology, which via backlight strobing further reduces the perceived motion blur. However, MBR introduces screen flicker, which is invisible to the human eye but can cause headaches to those sensitive to flickering after prolonged use.

Further, MBR reduces the maximum brightness of the screen, but you can adjust the frequency of the backlight strobing in the OSD (On-Screen Display) menu of the monitor, and find the perfect ratio of motion-clarity and brightness for you.

Alternatively, you can use AMD FreeSync, which provides a variable refresh rate for compatible graphics cards to eliminate screen tearing and stuttering completely. The AOC 24G2 FreeSync range is 48-144Hz, and it works with compatible NVIDIA GPUs without issues.

Note that you cannot use FreeSync and MBR simultaneously.

When MBR is not active, the backlight of the AOC 24G2 144Hz monitor is flicker-free as it doesn’t use PWM (Pulse-Width Modulation) to regulate brightness.

The OSD menu of the monitor is well organized and has all the features and tools you might need, but navigation through it via the four hotkeys, which are located beneath the bottom bezels, isn’t ideal as we’ve grown accustomed to joysticks.

You can also download the AOC G-Menu desktop application and manage all your settings there instead.

The AOC 24G2 has all the standard gaming features found on their G1 and G2 series of displays, including AOC Shadow Control and AOC Game Color for quick gamma curvature/color saturation adjustments.

Additionally, there’s the HDR Effect feature, which simulates HDR (High Dynamic Range), but it’s more of a gimmick than an actual feature you’d want to use.

What’s more, the stand is sturdy and has a cable management system while the screen is covered with a matte anti-glare coating. The bezels are matte-black and ultra-thin.

Connectivity options include two HDMI 1.4 ports, a single DisplayPort 1.2 input, VGA and a headphone jack. FreeSync is supported over HDMI and DisplayPort with a 48-144Hz VRR range.

Best of all, the AOC 24G2 price amounts to ~$180, which is an exceptionally good value for the price.

There are two additional models with the ‘U’ suffix: the AOC 24G2U and the AOC 27G2U which feature a quad-USB 3.0 hub and integrated 2W speakers. These are not currently available in the US. You can also find the AOC 24G2E with a tilt-only stand.

In case you can’t get the AOC 24G2, we recommend the ViewSonic XG2405. It’s based on the same panel and has an ergonomic stand, but no wide color gamut support.

Another good thing about these new 24″ 1080p 144Hz IPS models in general, is that the prices of the old VA models will go down. Therefore, the AOC C24G1A can now be found for as low as $144. So, if you have a lower budget and/or prefer deeper blacks over faster response time, the C24G1A offers great bang for the buck as well.

Finally, there is the BenQ EX2510, which features a 24.5″ 1080p 144Hz IPS panel by AU Optronics. This panel offers a faster response time, so there will be even less ghosting. However, it’s more expensive and doesn’t have as wide color gamut as the 24G2.

Of course, these specifications vary across different units anyway due to panel variance.

Now, some of the AOC 24G2 monitors have a newer BOE MV238FHB-NG0 panel. Its measured peak brightness and contrast ratio are closer to the specified 250-nits and 1,000:1, but it also has a slightly better response time speed and overdrive implementation.

With the newer panel, you don’t have to change the overdrive from Strong to Medium at lower frame rates, and the ‘Strong’ preset is also slightly faster.

So, essentially, you’re trading a bit of brightness and contrast ratio for better pixel responsiveness. Sadly, there’s no way to tell which one you’ll buy/get until you look at the sticker label on the back of the monitor.

A helpful tip: The older version has a serial number starting with ATN, whereas the newer ones starts with AWB.

Update: It seems that AOC went with the BOE panel due to panel shortages. Now, they’ll be discontinuing the models using the BOE panel, and start using the old PANDA panel again.

So, what’s the bottom line?

Considering its price, you really can’t go wrong with the AOC 24G2. It offers a smooth gaming experience with gorgeous colors and plenty of useful features.