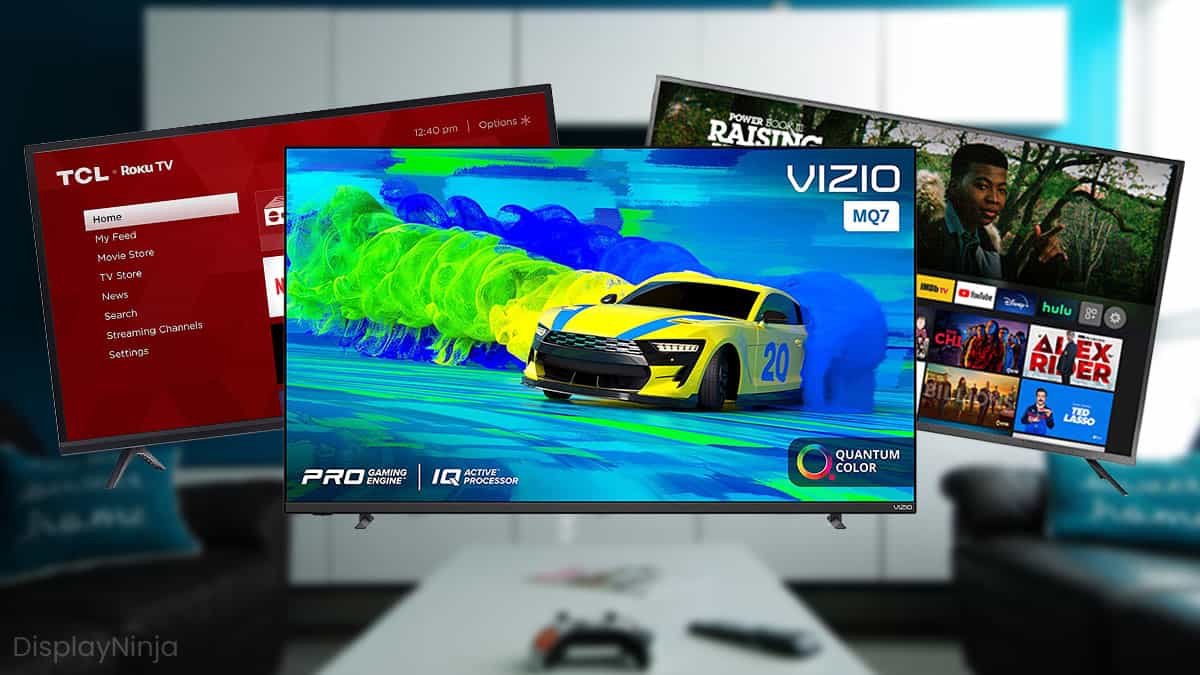 We’ve compiled a list of only the best TVs for gaming, which will ensure low input lag and quick response time for a smooth gaming experience no matter whether you just need a cheap 720p TV or a more expensive 4K HDR model.

Although these consoles don’t support 4K UHD resolution natively, they (or the TV) can upscale the image to 4K, thus providing you with crisp and vibrant image quality for gaming as well as other multimedia use.

Since the prices of 4K TVs have dropped drastically in recent years, we highly recommend future-proofing your setup with a 4K TV – unless you’re on a really limited budget or just want a secondary TV. 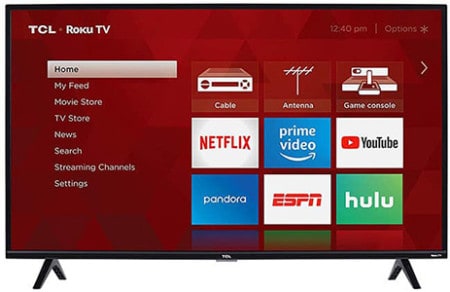 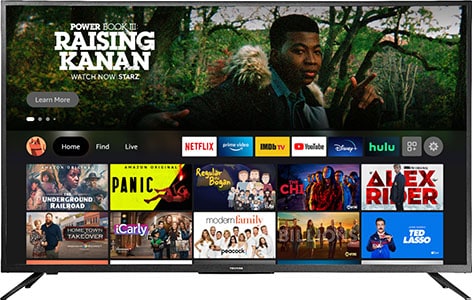 As you can see, TCL dominates the budget range of LED TVs for gaming. In most budget price ranges, they simply deliver the best bang for the buck.

There are many things to consider when buying a TV besides its screen size and resolution. The most essential TV specs for gaming are response time and input lag.

Given that the manufacturer doesn’t reveal these specs, we’ve tested and researched the performance of each TV in this list, so you can rely on our information to pick the best TV for gaming on PS4 and Xbox One.

Note that this list consists of entry-level and mid-range TVs costing up to $500.

For the most responsive console gaming experience, many gamers opt for monitors instead of TVs. However, monitors are usually more expensive and don’t offer as an immersive viewing experience as equally priced TVs.

Want the best cheap gaming TV? The TC S325 series offers the most affordable TVs that have proven fantastic performance for their price in both gaming and other multimedia activities.

We don’t recommend getting a cheaper TV than the TCL 32S325; many more expensive TVs aren’t nearly as good when it comes to gaming performance, which is why the S325 series is the best choice for around $200 (32″ – 43″ models, we don’t recommend the 49″ model since it’s notably more expensive, at that price point you can buy a better 4K TV).

The TCL S325 is based on a VA (Vertical Alignment) panel with a static contrast ratio of 3,500:1, which ensures deep black colors. However, it has a somewhat limited peak brightness of ~200-nits.

This means that the picture will be optimal in darker rooms rather than in bright rooms. There aren’t any advanced color adjustments available in the OSD (On-Screen Display), but the colors are accurate and vibrant straight out of the box.

For its size, the 1366×768 resolution provides a solid picture quality with crisp details – given that you’re looking at the screen from a reasonable viewing distance.

The screen has a pixel density of roughly 50 PPI (pixels per inch), meaning that your eyes won’t be able to distinguish individual pixels on the screen as long as you’re sitting at least 5.5 ft away from the screen.

If you plan on sitting a bit closer to the screen, get the 1080p model since it’s only ~$10 more expensive.

When it comes to performance, the TCL S325 input lag amounts to only ~15ms (Game Mode needs to be enabled), which makes for imperceptible delay between your actions and the result on the screen.

Many much more expensive TVs don’t have as low input lag as the S325. In fact, there are even some older PC monitor models that have higher input lag!

The pixel response time speed also amounts to ~15ms, which is not bad either. However, in fast-paced games, there will be some motion blur and noticeable trailing behind fast-moving objects, particularly when dark pixels are predominant in the picture.

Overall, the amount of trailing is tolerable and won’t bother most gamers, especially after considering the price of the TV.

When you set the TV at 31/100 brightness, it starts using PWM (Pulse Width Modulation) to regulate luminance.

This introduces screen flickering (180Hz), which is invisible to the human eye but may cause headaches to those sensitive to it after prolonged use.

The flickering also helps clear up the motion blur. So, if you’re a fan of fast-paced FPS games, reducing the screen’s brightness to 31 or less will provide you with clearer motion.

Moving on, the TCL S325 supports 24p format for judder-free playback, but only of native 24p content from DVDs and Blu-rays.

The remote is easy to use, but the provided Roku application for smartphones and tablets is a lot better.

Just like all TVs included in this guide, the S325 supports 4:4:4 chroma, so you won’t get text fringing when you connect the TV to a PC.

The TCL S325 TVs have a simplistic design with reasonably thick bezels and decent build quality. They can also be mounted on a wall or a third-party stand.

Connectivity includes three HDMI ports (one with ARC, all three with HDCP 2.2), a USB port, optical audio-out and analog audio-out ports, composite-in, a tuner, and two 4W integrated Dolby D+ speakers with a decent, but not great audio quality.

Note that the TV has no Ethernet port, so you will have to use WiFi for the Internet.

If you’re looking for the cheapest 4K TV for gaming that’s actually good and well worth the money, the best-selling Toshiba Fire 2020 is definitely for you.

Its peak brightness is not really high enough for the true HDR viewing experience, as expected at this price range, but it’s decent at ~350-nits for HDR content and ~250-nits for SDR.

With such peak brightness and no local dimming, the HDR content won’t look nearly as good as it does on mid-range or high-end HDR TVs, but for its price, it is a nice addition as some HDR games will look a bit better.

The Toshiba Fire 2020 TV input lag is impressive. In Game Mode, it amounts to only ~11ms which is on par with some monitors and fit for competitive gameplay.

When using HDR, input lag is increased significantly, but since HDR is mostly meaningless on this TV, we recommend disabling it for games.

Additionally, the response time speed is a bit faster than that of the S325 series with a 12ms pixel transition speed. So, there will be less motion blur in fast-paced games.

For 4K Ultra HD resolution, remember to enable the HDMI 2.0 option in the TV’s settings by selecting ‘Mode 2’ under HDMI Input Mode.

Sadly, the full 4:4:4 RGB signal is not supported, so this is not a good TV to be used as a PC monitor.

The TV is based on Fire TV OS, which is fairly smooth and easy to use.

Unlike the S325 series, the 24Hz judder cannot be removed from any source.

Lowering the TV’s brightness introduces PWM flicker at 220Hz, but this shouldn’t bother most users.

The colors are accurate out of the box but can be further enhanced by calibrating the screen using the TV’s settings.

Unlike the S325 series, the Toshiba Fire TVs have an Ethernet port – plus WiFi, three HDMI ports (one with eARC, all three with HDCP 2.2), a USB port, analog 3.5mm audio-out, digital audio-out, composite-in and a tuner.

Supported eARC/ARC audio formats include Dolby Atmos/Digital and DTS/DTS: X. There are two 10W integrated speakers, while the TV design is fairly slim.

The TCL S435 2020 series is not nearly as good for gaming due to high input lag at 1080p and a bit slower response time speed.

If you can afford something a bit pricier than the Toshiba Fire 2020 series, we highly recommend getting the Vizio M7 Series Quantum 2021. For its price, it offers quite a lot!

While it has a peak brightness of 500-nits, which is almost double that of the previously mentioned displays, you’re still not getting the true HDR viewing experience which requires at least 1000-nits.

Regardless, the picture is considerably brighter in comparison to the TVs mentioned above; you get more vivid details in the highlights of the picture and you can watch the TV in reasonably bright rooms without worrying about glare and reflections.

The TV has a decent contrast ratio of ~6,500:1, and it supports local dimming, but as there are only 30 zones, the HDR viewing experience is, again, not on par with the more expensive TVs – as expected.

In other words, you’re not getting the ‘true’ HDR viewing experience, but rather a glimpse of it, which is understandable at this price range.

Another exceptional thing about this TV is that it has an excellent DCI-P3 gamut coverage of ~96%, so colors will be vibrant and rich. In comparison, the previously mentioned TVs have ~80% DCI-P3 gamut.

Next, it has a decent pixel response time speed of ~13ms, so some ghosting will be noticeable in fast-paced games, but to a tolerable degree. Input lag is only ~11ms meaning that you won’t be able to feel any delays.

Note that the TV uses PWM dimming below the maximum brightness, but due to its high 480Hz frequency, it shouldn’t bother most users sensitive to flickering.

The Vizio MQ7 TV supports AMD FreeSync, which provides a variable refresh rate for the Xbox consoles with a 40-60Hz range.

So, if you have 45FPS (Frames Per Second) in a game, the TV will dynamically change its refresh rate to 45Hz, thus completely eliminating screen tearing and stuttering without adding input lag! Sadly, it doesn’t work below 40FPS.

This technology ‘inserts’ black frames between the regular frames and by doing so reduces perceived motion blur, but sacrifices some brightness in the process. It’s particularly useful if you’re playing fast-paced games in a dark room where the lower brightness won’t bother you.

In the Film Mode, you can prevent judder from 24p DVDs, Blu-rays, and streaming apps, but not from a 60Hz PC signal – however, 4:4:4 chroma is supported.

The TV is based on SmartCast OS, which is fairly responsive and easy to use.

The Vizio MQ7 has a nice design with thin bezels and VESA mount compatibility.

In terms of input lag and pixel responsiveness, all three TVs are similar.

Did you find the best TV for your PS4 or Xbox One console? Let us know in the comments if you need any help!

Overall, the TCL S325 and the Toshiba Fire TV 2020 TVs are great for gamers on a budget, whereas the Vizio MQ7, or one of its alternatives, is perfect for those who want a bit better image quality, smoother performance, and additional features – but don’t want to overpay for features their console won’t be able to utilize.

In case you’re looking for a better and more future-proof TV with features such as HDMI 2.1, 120Hz, and great HDR image quality, be sure to visit our best PS4 Pro/X1X TVs and best PS5/XSX TV buyer’s guides.