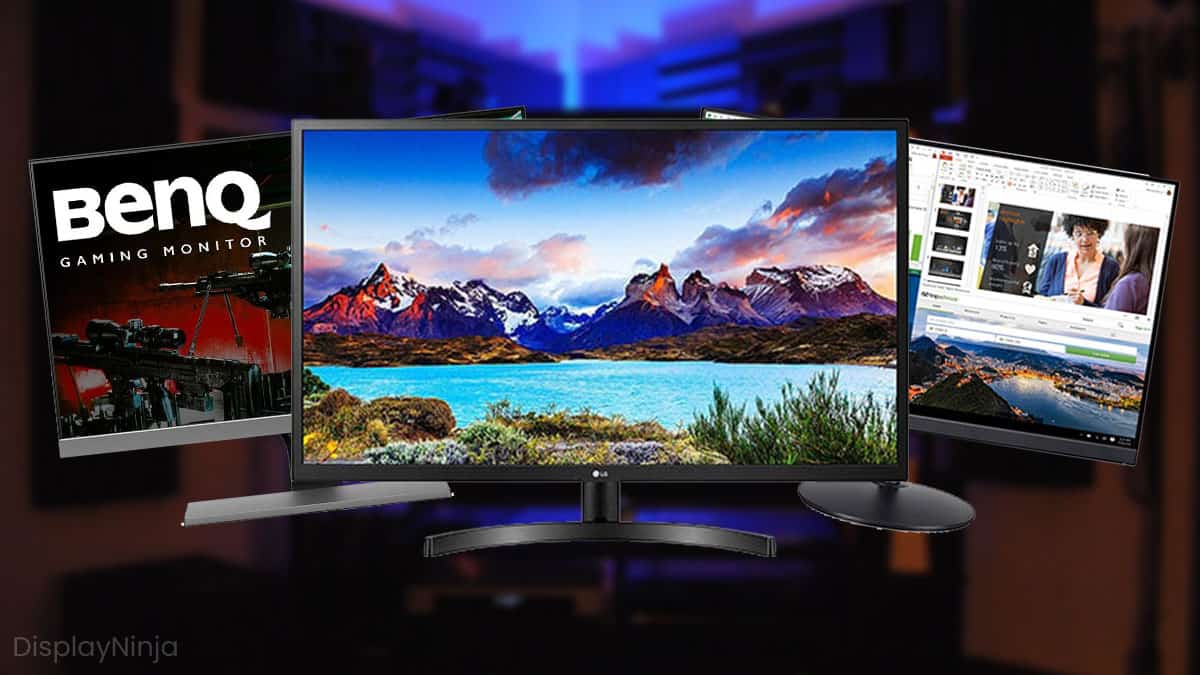 While using a TV as the display for your console is convenient and may seem like a good option because of its big screen, you will have to cope with its slow response time and high input lag.

That’s why if you want a responsive and enjoyable gaming experience, but have a limited budget, buying a new monitor is the way to go.

In this buying guide, you will find the best gaming monitors for PS4 and Xbox One as well as everything you need to know in order to decide which one is the best pick for you! 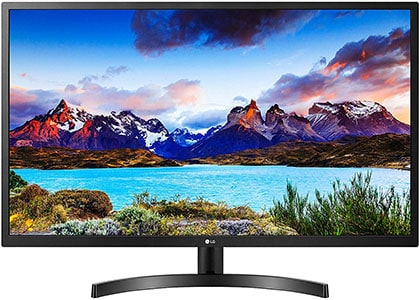 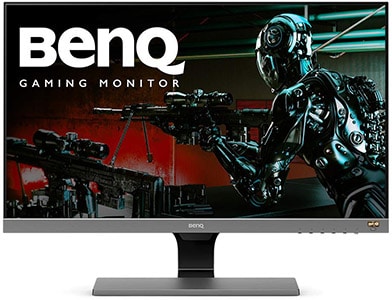 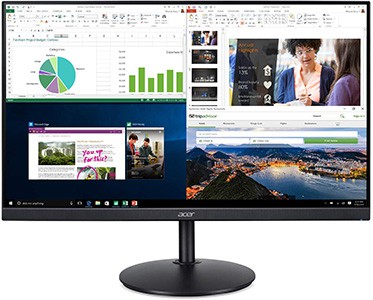 All four console gaming monitors will provide you with an input lag performance and a response time speed that are unmatched by any TV that’s available at this price range.

However, as these monitors differ from each other in screen size, panel type, and specific features, make sure to follow our guidelines and tips to pick the ideal display for you.

Since this guide is primarily intended for the standard Xbox One and PS4 consoles, all monitors feature Full HD 1920×1080 resolution and a native 60Hz refresh rate.

Do you have the PS4 Pro or Xbox One S/X? Visit our best gaming monitors for Xbox One X and PS4 Pro guide.

If you are looking for a smart TV that can handle PC and console games, check out our best TVs for gaming on PS4/Xbox One buyer’s guide.

Finally, if you’re looking for a monitor mainly for PC gaming and secondly for console gaming, visit our comprehensive gaming monitors guide.

If you are looking for the biggest PC monitor for PS4 and Xbox One gaming, we don’t recommend going over 32″.

Because you are limited to 1080p, a larger screen than 32″ would provide you with a really low pixel-per-inch ratio which results in a pixel-y image, and smudgy details.

The LG 32ML600M is the best 32″ 1080p monitor with an IPS panel, and it’s also the only display with these specs that offers HDR (High Dynamic Range) support.

Out of all three-panel technologies, which include IPS (In-Plane Switching), TN (Twisted Nematic), and VA (Vertical Alignment), IPS monitors offer the widest viewing angles and the most accurate, consistent, and vibrant colors.

The wide 178-degree viewing angles ensure the picture won’t shift in color, contrast, or brightness when you watch the screen at skewed angles.

Note that on a 32″ screen, 1080p resolution has a pixel density of 70 pixels per inch (PPI), meaning that it’s not ideal for regular PC use as individual pixels will be noticeable from up close.

32″ 1080p displays are more suited for gaming at a distance. In fact, at around 4 ft (~120cm), you won’t be able to notice the individual pixels. Think of the LG 32ML600M as a small TV with the responsiveness of a gaming monitor.

Naturally, you cannot expect the same HDR viewing experience as you’d get from a 4K HDR TV since the LG 32ML600M has only 1080p resolution, a 300-nit peak brightness, and a 1,200:1 contrast ratio, but the colors will be just as vivid as that of some more expensive TVs.

Add to that the fact that the LG 32ML600M is also considerably cheaper and faster than any HDR TV even near this price range, you get a pretty well-balanced image quality and performance for the money.

Just like all monitors included in this guide, the LG 32ML600M doesn’t use PWM (Pulse-Width Modulation) to regulate brightness, so it is flicker-free. It also has a built-in low-blue light filter, so you can game for hours without straining your eyes.

Note that many users have reported that their monitor’s stand had broken. We recommend getting a third-party stand and mounting it via the VESA pattern.

When it comes to connectivity, you will find two HDMI ports, a single VGA input, and a headphone jack. 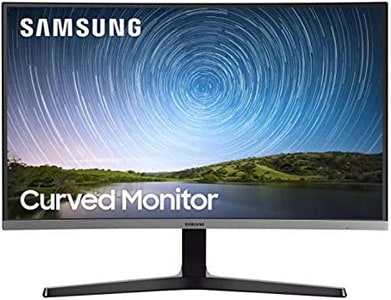 The Samsung CR502 is one of the best non-high refresh rate 32″ 1080p monitors with a VA panel. It doesn’t support HDR, but it has a higher contrast ratio, a curved screen, and AMD FreeSync.

The VA panel of the Samsung C32R502 monitor provides a superior contrast ratio of 3,000:1, which makes for deeper blacks and a more vivid relation between the darkest and the brightest tones.

However, the colors are not as accurate and punchy as they are on IPS models. There is no obviously better option here, some prefer higher contrast (VA), and some prefer better colors (IPS).

The Samsung C32R502 covers the basic sRGB color space, so there’s no over-saturation.

The viewing angles are almost as good as they are on IPS panels. Some minor shifts in contrast are expected, but only if you’re looking at the screen from skewed angles.

Another thing where IPS panels are better than VA is pixel response time, particularly when it comes to transitioning of dark pixels. So, in really dark games, you may notice some smearing of fast-moving objects, but nothing game-breaking.

Turning to the features, the Samsung C32R502 supports AMD FreeSync over HDMI.

If you have a compatible graphics card or an Xbox One console, FreeSync will allow the monitor to change its refresh rate dynamically according to the frame rate.

This way, all screen tearing, and stuttering is removed without any noticeable (~1ms) input lag penalty.

However, since FreeSync is based on VESA’s Adaptive-Sync standard, which is free, it doesn’t increase the monitor’s price.

So, even if most of your games are limited to 30FPS, it’s nice to have this feature for other games or if you have a PC with an AMD FreeSync-compatible graphics card.

The Samsung C32R502 has a subtle screen curvature of 1800R, ultra-thin bezels, 100x100mm VESA mount compatibility, and a low-haze anti-glare screen coating, while its stand is tilt-only.

Connectivity options include HDMI 1.4, VGA and a headphone jack.

Of course, you can utilize either 1440p or 144Hz on the PS4 or Xbox One, but if you plan on getting a newer console or a gaming PC, you should definitely invest in something like the Gigabyte G32QC.

In case you want something that’s more practical for PC use and has a VA panel, the BenQ EW277HDR is for you. It’s not curved nor does it support AMD FreeSync, but it has HDR and pretty high peak brightness.

Plus, you get a higher peak brightness, which boosts from regular 300-nits to 400-nits when HDR content is detected for more vivid details in the shadows and highlights of the picture.

The higher pixel density also makes for more screen real estate and sharper details. While 81 pixels per inch is still not ideal for PC use, it’s much better than 70 PPI of the 32″ 1080p models.

Just like with the Samsung CR502, there is a bit of visible motion blur in fast-paced games, particularly in darker scenes. For slower and more graphically-oriented games, this isn’t an issue at all. If you mostly play FPS games, though, consider the 27″ IPS gaming monitor we’ll get into next.

The BenQ EW277HDR also offers the unique Brightness Intelligence Plus technology, which consists of built-in sensors that automatically adjust the screen’s brightness and color temperature according to ambient lighting.

This will ensure optimal picture quality as well as a comfortable and healthy viewing experience for your eyes.

Unfortunately, the gorgeous thin-bezel design of the monitor is tilt-only and not VESA mount compatible while connectivity options include two HDMI ports, VGA, a headphone jack, and two 2W integrated speakers.

Want an affordable IPS monitor with gorgeous colors as well as AMD FreeSync for your Xbox One? The Acer CB272 is an excellent display for the price with a bunch of extra features and it even includes a versatile stand!

What’s more, it has a quick response time speed for virtually no ghosting in fast-paced video games.

As we said earlier, 1080p on 27″ monitor isn’t perfect for office-related use involving productivity work and spreadsheets, but it’s okay for gaming, especially if you sit a bit further from the screen.

The Acer CB272 supports AMD FreeSync over both HDMI and DisplayPort with a 48-75Hz range.

Alas, this feature can only be used if the refresh rate is set at 75Hz, so you won’t be able to take advantage of it on consoles, only on PC.

Other available features include Black Boost (for better visibility in darker games), customizable and pre-optimized picture presets including sRGB Mode, and advanced picture adjustment tools such as gamma, grayscale, and 6-axis hue/saturation.

The design of the monitor is another exceptionally good feature of the Acer CB272 for its price. You get a gorgeous slim design with ultra-thin bezels as well as full ergonomic support with up to 120mm height adjustment, 360° swivel, 90° pivot, -5°/20° tilt, and 100x100mm VESA mount compatibility.

Connectivity options include DisplayPort 1.2, HDMI 1.4, VGA, a headphone jack, and two 2W built-in speakers. Unfortunately, only VGA and audio cables are provided with the monitor.

If you want a smaller version of this monitor, there’s the Acer CB242Y. It’s a 24″ screen which offers great pixel density for PC use. It has all the same specs as the CB272 except that it has no DisplayPort input.

Whichever monitor you decide on, it will deliver a more responsive and intense gameplay experience compared to an equally priced TV.

If you are a mostly casual gamer, we recommend either the LG 32ML600M or the Samsung CR502 for a comfortable gaming experience from your favorite armchair, office chair, or couch.

For mixed use of console and PC gaming/multimedia use, the 27″ BenQ EW277HDR and the Acer CB272 offer a well-balanced performance and great image quality.