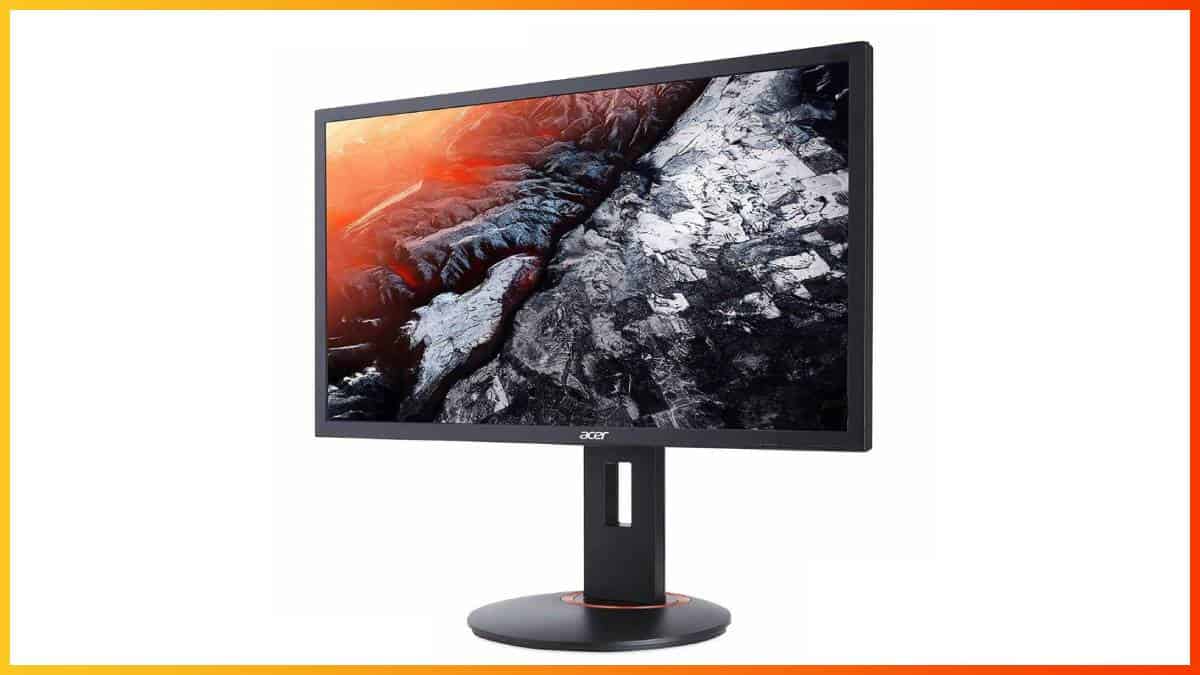 The Acer XFA240 is an affordable 24″ 1080p 144Hz 1ms gaming monitor with a fully ergonomic design and plenty of gaming features including AMD FreeSync and G-SYNC compatibility.

The Acer XFA240 is one of the many 24″ 1080p 144Hz 1ms gaming models available. However, the XFA240 was the first monitor of this type to be certified by NVIDIA as G-SYNC compatible.

Other specifications include 1080p resolution, which on the 24″ screen of the Acer XFA240 monitor results in sharp and clear picture quality.

Naturally, 1440p or 4K would provide you with significantly more details and screen space, but it would also be more demanding to drive at 144Hz, whereas 1080p isn’t too taxing on your CPU/GPU allowing you to reach higher frame rates.

While TN panel monitors don’t have as vibrant colors nor as high contrast ratio as IPS and VA panels, respectively, they do offer the best response time speed of only 1ms.

Such quick response time allows the pixels to change from one color into another almost instantaneously, which, in turn, removes ghosting and motion blur in fast-paced games.

When you add the 144Hz refresh rate to that, you get an incredibly responsive and engaging fast-paced gaming experience.

The Acer XFA240 input lag amounts to ~6ms, which is fit for professional gameplay as there’s no perceptible delay between your commands and the result on the display.

Note that the backlight of the monitor is flicker-free as it doesn’t use PWM (Pulse-Width Modulation) to regulate brightness, so you don’t have to worry about headaches if you’re sensitive to flickering.

If you have an Adaptive-Sync (FreeSync) compatible graphics card, you’ll be able to use the full potential of the Acer XFA240 144Hz gaming monitor.

The FreeSync technology removes screen tearing and stuttering by allowing the monitor to change its refresh rate according to the GPU’s frame rates, thus providing you with a variable refresh rate (VRR).

Note that VRR works with most of AMD and certain NVIDIA (GTX 10-series, RTX 20-series, or newer) graphics cards.

For NVIDIA cards, VRR is supported only via DisplayPort with a 48-144Hz range.

AMD LFC (Low Framerate Compensation) is also supported, which means that even when your FPS drops below 48, FreeSync won’t stop working; the display’s refresh rate will be double or triple the frame rate for a smoother performance.

There are six monitor hotkeys at the bottom bezel which can be used as shortcuts for the following functions: swapping between the Game modes, adjusting the Overdrive setting, opening the OSD (On-Screen Display) menu, changing the input source, adjusting the volume, and turning the monitor on/off.

The Game modes include three customizable profiles where you can save and edit your settings. The Acer XFA240 also offers advanced picture adjustments such as gamma presets and 6-axis hue/saturation.

Other gaming features include ‘Black Level’ for better visibility in darker games and ‘Aim Point,’ which consists of customizable crosshair overlays.

Connectivity options include DisplayPort 1.2, HDMI 1.4 with MHL, and Dual-Link DVI-D. There are also two 2W built-in speakers and a headphone jack.

Alongside the Acer XFA240, there’s also the Acer XF240H model, which is essentially the same monitor (also G-SYNC compatible), but it only supports FreeSync over DisplayPort, not over HDMI.

It’s also available as a 27″ model, the Acer XF270H Bbmiiprx, which is also G-SYNC compatible.

We recommend the LG 24GN650 instead. It’s just as fast, but also has an IPS panel with wider viewing angles and better image quality for the same price.

While the Acer XFA240 does offer smooth performance and a decent image quality, there are newer and better monitors available around this price range.