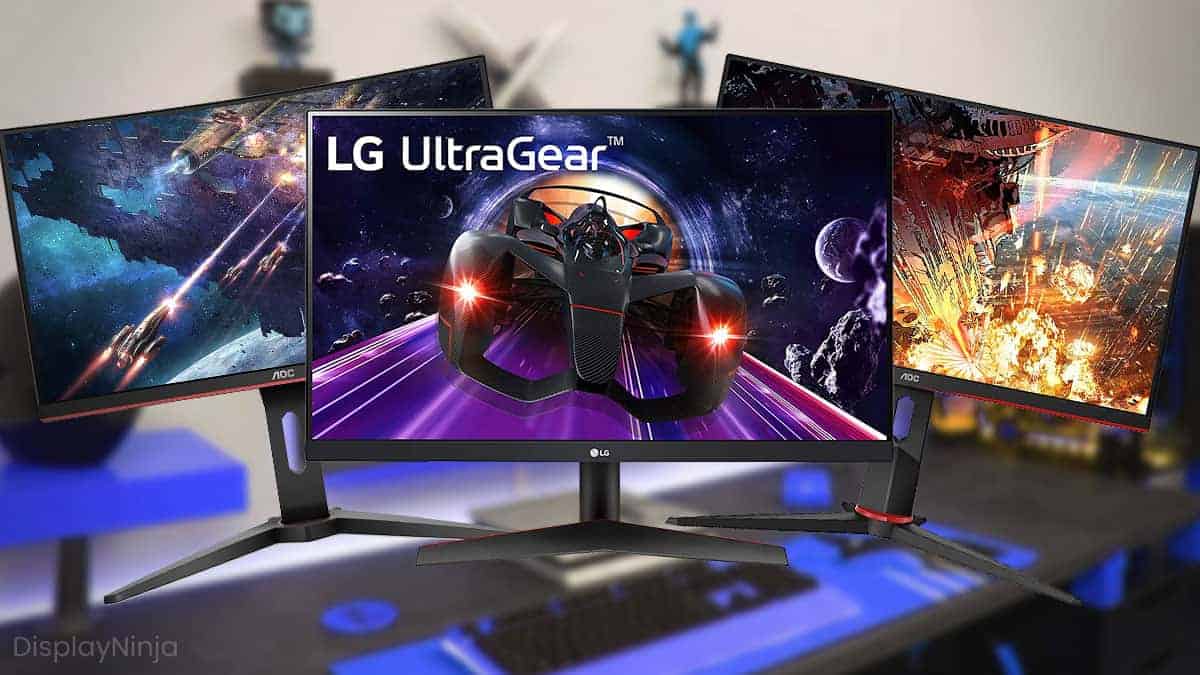 If $200 is all you can give away for your new display, do not despair — you won’t need a $500+ monitor to enjoy a crisp image quality and a smooth gaming performance.

In this guide, you’ll find the best monitors for gaming under 200 USD.

All monitors are different from each other, and there’s no doubt that at least one is perfect for you, depending on what type of games you play. 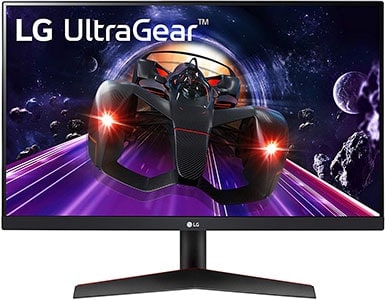 Even with less than 200 USD, you can nowadays get a great monitor with either a 144Hz refresh rate, a curved display, or an ultrawide resolution.

Check out the reviews below to find the best gaming monitor under 200 USD for you!

Based on an IPS panel, the LG 24GN600 boasts 178° wide viewing angles meaning that the image will remain perfect regardless of the angle you’re looking at the screen.

Thanks to its rich and consistent colors that cover the entire sRGB color space, you can enjoy vivid image quality and even do professional color-critical work if you have a colorimeter to profile the display. For basic content creation though, the LG 24GN600 is more than good enough right out of the box.

As it’s the case with all IPS monitors, there’s some IPS glow and the native contrast ratio is mediocre at ~1,000:1, so you won’t get as deep blacks as that of VA panel monitors with a contrast ratio of around 3,000:1. However, VA technology has other disadvantages, which we’ll get into later.

Moving on, the LG 24GN600 monitor has a decent peak brightness of 300-nits and most importantly, a rapid 1ms GtG pixel response time speed for no visible ghosting behind fast-moving objects.

In addition to its rapid response time speed and low input lag, the LG 24GN600 supports variable refresh rate (VRR) for tear-free gameplay up to 144Hz.

VRR synchronizes the refresh rate with GPU’s frame rate. So, if your frame rate is 70 FPS (Frames Per Second), the refresh rate dynamically changes to 70Hz in order to display 70 whole frames without tearing; what’s more, no perceptible latency is added like it’s the case with V-Sync.

You can use VRR as long as you have an AMD FreeSync compatible GPU. While not officially certified as ‘G-SYNC Compatible’ by NVIDIA, VRR also works with compatible GeForce GPUs (10-series or newer) over DisplayPort without any issues.

The LG 24GN600 also supports MBR (Motion Blur Reduction), which uses backlight strobing to reduce perceived motion blur at a cost of picture brightness. However, VRR and MBR cannot be active at the same time.

The stand of the monitor is tilt-only, but the screen has ultra-thin bezels and it’s VESA mount compatible via the 100x100mm pattern. So, you can easily pair it with a decent $30 desk stand for full ergonomic support and more desk space.

Alternatively, there’s the LG 24GN650 model, which is the same monitor but with a more ergonomic stand. 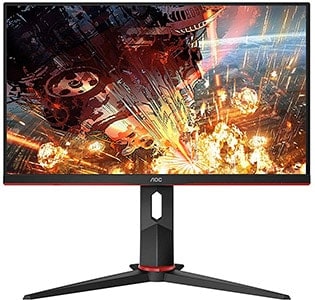 Although both monitors use IPS panels, the AOC 24G2 has one developed by PANDA, while the one in the LG 24GN600 is made by BOE.

Firstly, the AOC 24G2 doesn’t have quite as fast pixel response time speed as the LG 24GN600. So, there’s some minor ghosting noticeable in certain fast-paced scenes, but it’s rather subtle and not nearly as obtrusive as it is on most VA monitors.

Having said that, if you mostly play fast-paced games competitively and are sensitive to ghosting, the LG 24GN600 will suit you better.

So, if you’re not that picky when it comes to pixel response time, the AOC 24G2 will provide you with a bit more immersive image quality.

It even has an sRGB mode that can restrict the color gamut down to ~100% sRGB in case you need accurate colors, but you cannot adjust brightness in this mode; it’s locked to 90/100, which might be too bright for some users.

Still, since the over-saturation is fairly mild, most users will prefer using the native gamut for the extra vibrancy.

The AOC 24G2 has certified G-SYNC compatibility for smooth VRR performance with both AMD and NVIDIA graphics cards.

The design of the monitor is exceptionally good for the price. You get full ergonomic support including up to 130mm of height adjustment, 90° rotate, +/- 30° swivel, -5°/22° tilt and 100x100mm VESA mount compatibility. 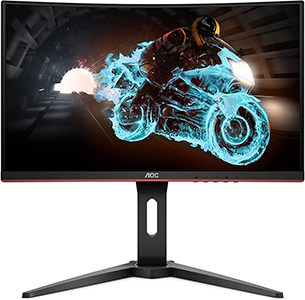 Under $200, you can also get a great 144Hz gaming monitor with a curved VA panel, the AOC C24G1A. It’s even factory-overclocked to 165Hz for a small boost in motion clarity in comparison to 144Hz (though it’s not noticeable).

Now, such high contrast ratio provides you with deeper blacks and better relation between the darkest and the brightest tones, which is the main asset of VA panels.

The colors aren’t as consistent as that of IPS displays, but they are vibrant and vivid regardless thanks to the 89% DCI-P3 (~120% sRGB) wide color gamut support of the C24G1A. So, you get more saturated colors with the ability to restrict the gamut to the standard 100% sRGB using the sRGB color temperature mode.

For entry-level color-critical work, IPS is still the better technology due to its wider viewing angles and no gamma shift.

In comparison to the previously mentioned 144Hz monitors, the VA panel of the AOC C24G1A has a slower response time speed, resulting in noticeable trailing behind fast-moving objects, especially in dark scenes.

Still, the C24G1A is one of the faster VA monitors, so the amount of ghosting might not bother a lot of gamers.

On balance, if you mostly play competitive FPS games, the IPS models will provide you with better results and performance. The AOC C24G1A is more suited for those who play FPS games more casually and prefer immersion provided by the higher contrast ratio and wide color gamut.

It supports AMD FreeSync over both HDMI and DP with a 48-144Hz VRR range, and although it’s not certified as G-SYNC Compatible by NVIDIA, FreeSync works with compatible NVIDIA cards.

Unfortunately, some units of the AOC C24G1A (and most other monitors based on VA panels) are affected by the brightness flickering issue when VRR is enabled.

This brightness flickering is mostly visible when your FPS fluctuates a lot or when it gets below 48FPS and triggers LFC. It doesn’t affect all units of the monitor, and it’s not visible in all video games.

The AOC C24G1A boasts a sturdy design with decent ergonomics, including up to 130mm of height adjustment, +/- 30° swivel, tilt and 100×100 VESA mount compatibility.

It has an aggressive screen curvature of 1500R, which nicely complements the monitor and adds a bit of extra depth and immersion. Connectivity options include two HDMI 2.0 ports, DisplayPort 1.2, VGA and a headphone jack. Both HDMI and DP support 144Hz.

Alternatively, you might want to check out the older AOC C24G1 model with a standard 144Hz refresh rate and no wide color gamut support. 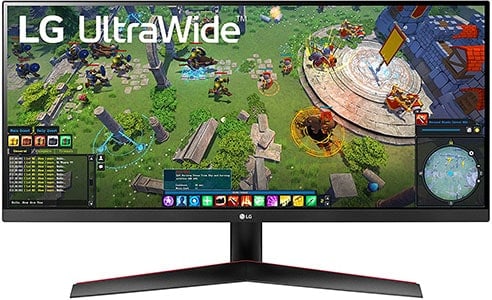 Nowadays, you can even get an ultrawide monitor for under 200 USD. This type of monitor offers a 21:9 aspect ratio as opposed to the standard 16:9 giving you extra horizontal space for a more cinematic viewing experience.

Ultrawide monitors are great for PC gaming, watching movies and multi-tasking as well.

The LG 29WP60G is the only 21:9 monitor available for under $200. Note that the monitor is 29-inch in diagonal but longer in width than a standard display. So, the monitor is as tall as a regular 23-inch 16:9 monitor, but wider — which may take some time getting used to.

The LG 29WP60G offers 2560×1080 Full HD Ultra-Wide resolution and since it is a fairly small monitor in size, it will provide you with a decent pixel density of 96 PPI (Pixels Per Inch).

This means that the image will have very sharp details and plenty of screen real estate for you to work with.

As if that’s not enough, the monitor is based on an IPS panel with true 8-bit color depth and over 99% sRGB color gamut, so the colors will be accurate and consistent, which may interest aspiring designers as well.

The LG 29WP60G supports AMD FreeSync with a 40-75Hz VRR range, and it works well with compatible NVIDIA GPUs.

If your favorite games support 21:9, you will be able to enjoy them on a whole new level!

Keep in mind that video games that don’t support ultrawide resolutions will just have black borders at the sides or stretch the image. You can check which games support the 21:9 aspect ratio here.

The design consists of thin bezels at the top and at the sides which make it a great choice for a multi-monitor setup as well. 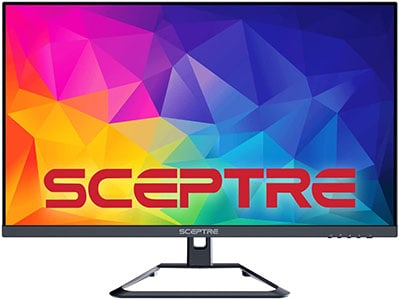 You can even find a 4K monitor below $200, though without some nifty features such as AMD FreeSync.

Even though it’s $50 – $100 cheaper than most budget 4K monitors, the Sceptre U275W-UPT features an IPS panel with wide viewing angles, 99% sRGB color gamut and a strong peak brightness of 350-nits!

4K UHD resolution results in a high pixel density of 163 PPI on 27″ monitors, which translates to plenty of screen real estate with crystal-clear details and text!

Keep in mind that you’ll need a powerful PC system to run the latest games at 4K with decent frame rates and picture settings. For office and everyday use, this won’t be an issue.

Just like most IPS monitors, the Sceptre U275W has a contrast ratio of 1,000:1, so don’t expect particularly deep blacks as that of VA panels.

However, it has a fast response time speed, so there won’t be any prominent trailing behind fast-moving objects. The monitor even supports 70Hz over DisplayPort for a very subtle boost in motion clarity as opposed to 60Hz.

The stand of the monitor is fairly sturdy and offers tilt adjustment by -5°/15° as well as VESA mount compatibility via the 100x100mm pattern.

This brings us to the end of our best gaming monitor under 200 USD buyer’s guide. As you can see, for just $200, you can get a pretty neat monitor.

Each monitor on the list has its advantages and disadvantages, so only you can know which one is the best for you.

If you mainly play competitive FPS games, then you should definitely get the LG 24GN600.

In case you’re more of a single-player kind of gamer and don’t care about scoreboards, the AOC C24G1A will provide you with a more immersive gaming experience thanks to its high contrast ratio while the AOC 24G2 is the best option if you want a little bit of both.

Finally, in case you don’t care much for high frame rates and fast-paced gaming, the LG 29WP60G offers decent performance, but a more immersive image quality as well as accurate and consistent colors.