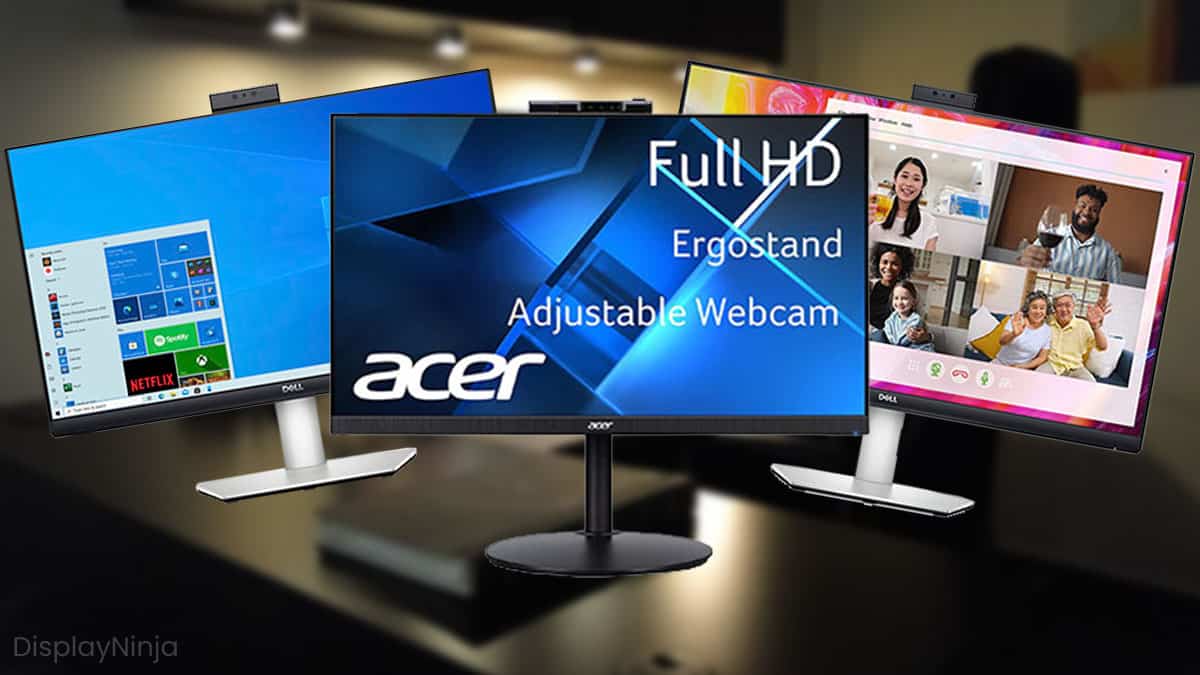 In the market for both a monitor and a webcam? Why not go the 2-in-1 route?

In this guide, we’ll go over the best monitors with built-in cameras available and everything you need to know before buying one! 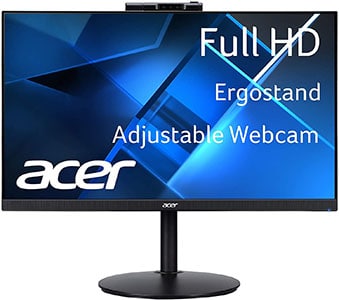 In truth, there aren’t that many monitors with built-in webcams worth considering as most high-end models are overpriced.

Therefore, we’ve narrowed down your selection to only a few models that are actually worth the money, and we’ll cover which models are overpriced and why.

Additionally, we’ll mention similar monitors without built-in cameras as alternatives in case purchasing a display with the same specs and a webcam separately is a more cost-effective solution.

When it comes to value for money, buying a budget 24″ 1080p IPS monitor with a built-in webcam makes the most sense.

The regular budget 22″ – 24″ 1080p monitors are currently overpriced due to the increased demand and component supply shortage, so you can often find that models with and without built-in cameras cost roughly the same.

The Acer CB242YD is both cost-effective at ~$200 and has the convenience of having a built-in camera.

Thanks to its IPS panel, the Acer CB242Y Dbmiprcx offers accurate and vivid colors as well as 178° wide viewing angles, ensuring that the image remains perfect regardless of the angle you’re looking at the screen.

Further, the 1920×1080 resolution results in a decent pixel density on the 23.8″ viewable screen. With 92.56 PPI (pixels per inch), you get a fair amount of screen real estate and detail clarity.

In comparison, a 27″ monitor with 1920×1080 resolution has 81.59 PPI, which results in less screen space and smudgier details due to larger pixels.

All IPS monitors have some IPS glow, which is characterized as visible glowing around the corners of the screen, but it’s mostly noticeable in dark scenes with high brightness settings. Its intensity also varies between units, but in most cases, it’s completely negligible or tolerable.

The monitor has a static contrast ratio of 1,000:1, as expected from IPS technology, so you won’t get as deep blacks as that of VA panels with ~3,000:1 contrast ratio. However, there are no budget VA monitors with built-in cameras, and VA technology has other disadvantages, such as narrower viewing angles, not as consistent colors and slower response time speed.

Finally, the Acer CB242YD has a peak brightness of 250-nits, which is standard for budget monitors. Unless you’re in a particularly bright room without any blinds/curtains, the screen can get more than bright enough.

Moving on, the Acer CB242YD even supports AMD FreeSync for tear-free gameplay between the supported variable refresh rate range of 48-75Hz. The 75Hz maximum refresh rate also provides you with a small but rather noticeable boost in motion clarity (as long as you can get ~75FPS) in video games.

Since the monitor has a DisplayPort input, you can also use FreeSync with compatible NVIDIA cards (GTX 10-series or newer) as well as AMD. For the best performance, you might want to try extending the VRR range a bit.

It’s also adjustable, allowing you to tilt it for a few degrees, and it has Windows Hello certification.

Connectivity options include DisplayPort 1.2, HDMI 1.4, VGA, a headphone jack, an audio line-in for the 2x2W integrated speakers and a USB 2.0 port for the webcam.

In case you want a model with a USB hub, check out the Acer B247Y D variant with an ergonomic stand and four downstream USB 3.0 ports.

Another good option is the ASUS BE24EQK with a webcam that can swivel to the left/right, but it’s usually more expensive and has a tilt-only stand. 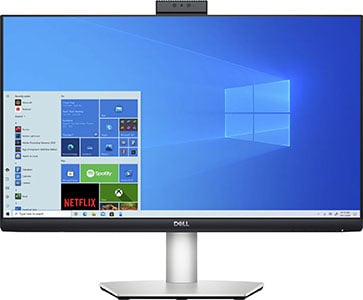 Looking for something a bit better? The Dell S2422HZ offers some premium features that might appeal to you. However, in terms of image quality and performance, there are better and cheaper monitors that you can pair with a separate webcam.

For instance, you could get a 27″ 1440p IPS monitor with a wide color gamut and 144Hz, such as the Acer XV272UV and a basic 5MP 1080p webcam. You’d get a much better image quality and gaming performance with the same webcam quality around the same price, but here’s what might make the Dell S2422HZ worth considering.

It also supports AMD FreeSync up to 75Hz and has a DisplayPort input.

The main reason the Dell S2422HZ is more expensive than the Acer CB242YD is that it has a USB type C port with DP Alt Mode and 65W PD.

So, if you have a laptop that supports DP Alt Mode and PD, you can simultaneously charge it and transfer audio, video and data with just one cable.

Further, it has a 5MP camera that can take higher-resolution photos (2560×1920), but videos are still limited to 1920×1080 30FPS. The webcam pops up from the top of the screen, so you can hide it when not in use. Windows Hello is supported too. 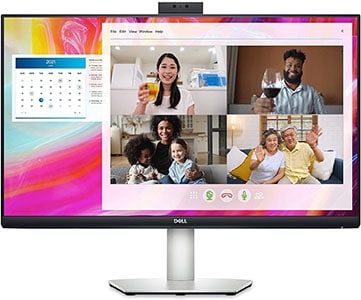 Interested in a monitor with a high resolution? At around $430, The Dell S2722DZ is the most expensive display with a built-in webcam that we’d recommend.

So, you get a bigger screen with a higher resolution, resulting in a pixel density of 108 PPI, which most users find to be the sweet spot. You get plenty of screen space and sharp details without having to use any scaling.

The 27″ variant can also get a bit brighter with a 350-nit peak brightness, while the other panel-related specifications are the same, including the 178° viewing angles, 1,000:1 contrast ratio and sRGB gamut coverage.

The design and connectivity options are the same as that of the 24″ variant (full ergonomic support with USB-C DP Alt Mode and 65W PD, DP 1.2, HDMI 1.4, built-in speakers, headphone jack and two downstream USB 3.0 ports).

In case you want a model with USB-C, we recommend checking out our dedicated best USB-C monitors buyer’s guide.

When it comes to better and more expensive monitors with built-in cameras, they’re usually very overpriced. For instance, the Dell C3422WE is a 34″ 3440×1440 IPS ultrawide model that goes for $1000 yet you can find a very similar monitor for $500, such as the LG 34WN80C, pair it with a basic webcam and get the same results.

So, depending on your use case, we recommend checking out our best gaming, photo/video editing or office use guides and picking the best model for you there.

As you can see, monitors with built-in cameras make the most sense if you’re looking for a budget model, such as the Acer CB242YD or one of its alternatives.

The Dell S2422HZ and S2722DZ models are also worth considering if you’ll benefit from their premium features, but the other more expensive monitors with integrated cameras are usually not worth considering.