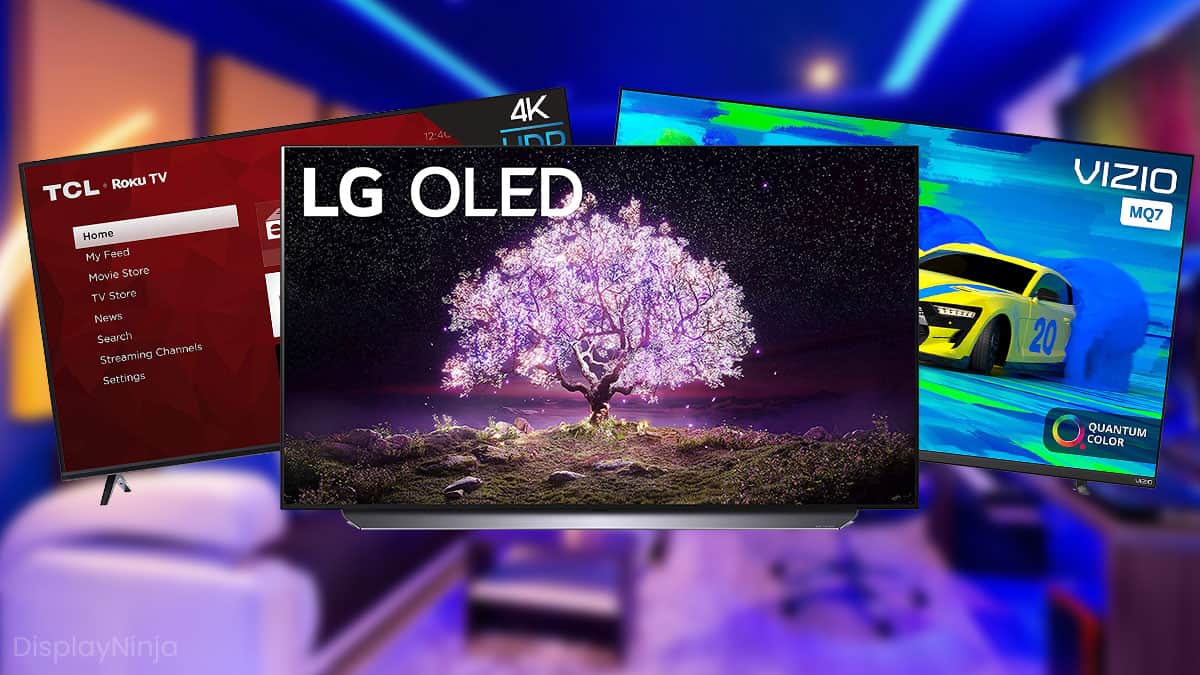 Whether you’ve got limited space in your room or simply don’t want a TV larger than 50″ – you’ll find the best 48″, 49″, and 50″ TVs right here, as well as everything you need to know about them! 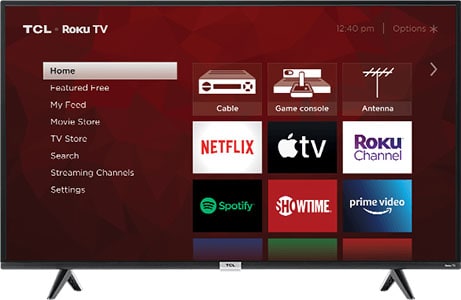 As you can see, you have quite a selection when it comes to ~50″ sized TVs, so be sure to check out the reviews below in order to ensure you’re getting the best one for you!

The models we selected offer the best value for the money in their categories, so it’s worth checking out the ‘Alternatives’ sections as well, depending on availability and region. We’ll also mention if there are any upcoming TVs worth keeping an eye on.

It seems impossible for us to write a TV buyer’s guide and not include TCL’s S435 series TVs, but that’s only because they offer such excellent image quality and smooth gaming performance at an affordable price!

The TCL 50S435 offers a high static contrast ratio of 6,000:1, which makes for deep and inky blacks resulting in vivid details in the shadows of the picture.

Peak brightness, on the other hand, is not as impressive at a measly 200-nits, but the TV can still get decently bright under normal lighting conditions.

It’s also hard to find a notably brighter TV at this price range, so if you plan on watching the TV in a particularly bright room with plenty of windows and sunlight, you should consider investing in a more expensive TV.

As expected from a budget TV, it covers ~80% of the DCI-P3 color space. So, colors will still be rich and vivid, but not quite as vibrant as that of the more expensive models with 90% or close to 100% DCI-P3 gamut coverage.

The TCL S435 supports HDR10 (High Dynamic Range), but due to its low peak brightness and lack of local dimming, among other things, HDR content won’t look particularly great – again, as is expected from a budget TV.

Besides the exceptional contrast ratio for the price, the TV also offers impressive input lag and response time performance.

Input lag is the measured delay between your actions and the result on the TV; at just ~13ms of lag, you won’t be able to feel or notice any delays while gaming!

At 1080p, input lag is noticeably higher (~30ms), so we don’t recommend this TV for gaming consoles that run natively at that resolution (PS4, Xbox One, etc.).

Further, the pixel response time speed of around 18ms is sufficient to eliminate most trailing behind fast-moving objects, but since pixels take a bit longer to change from really dark into bright pixels, some smearing in dark scenes will be noticeable, but to a tolerable or even negligible degree, depending on how sensitive you are to it.

Just like most TVs, the TCL 50S435 uses PWM (Pulse Width Modulation) to regulate brightness below the maximum. At lower brightness settings, it introduces a 120Hz dimming frequency, which might bother some users sensitive to flickering after prolonged use.

The TV is based on Roku TV OS for smooth and simple navigation through the apps, it can remove 24p judder from DVDs and Blurays, and it supports 4:4:4 chroma for sharp text when connected to a PC.

The design of the TV is fairly slim, has thin bezels and 200x200mm VESA mount compatibility.

The TCL S425 line-up from 2019 has a bit faster response time speed (12ms) and low input lag at 1080p, but it’s hard to find it at a reasonable price. It also cannot remove 24p judder from native streaming apps.

The contrast ratio is also higher at 6500:1 and the TV has local dimming with 30 zones. These zones can dim parts of the image that need to be dark, without greatly affecting the parts of the screen that should remain bright.

Since there are only 30 zones, it’s not particularly effective, but some scenes where dark and bright objects are far apart can look notably better. Other scenes can look worse, so you’ll have to choose whether to turn local dimming on or off, depending on the content.

Gaming performance is also better than that of the TCL S435. You get imperceptibly low input lag of ~11ms, while the pixel response time speed is very good at ~12ms.

On top of that, the Vizio MQ7 TVs support AMD FreeSync, allowing you to synchronize refresh rate with frame rate for tear-free gameplay between 40 and 60FPS if you have a compatible Radeon graphics card or an Xbox console.

The TV uses PWM to regulate brightness, but at a high 480Hz frequency, which shouldn’t bother even those sensitive to flickering.

This technology inserts black frames between regular ones in order to reduce perceived motion blur, but sacrifices picture brightness in the process.

If the Vizio M7Q is not available, check out the following models. 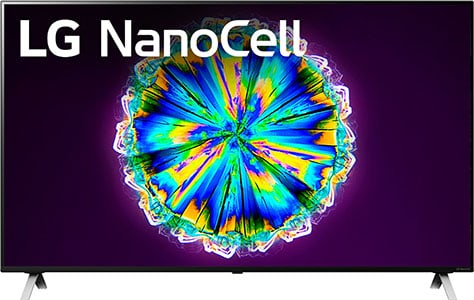 If you want a TV with a native 120Hz refresh rate for a responsive gaming experience, the LG NANO85 is the only ~50″ model available around the $600 price point, with other models going for ~$1000.

The LG 49NANO85 has an IPS-type panel, so it offers superior viewing angles to the VA counterparts, allowing you to watch the TV from basically any angle without the image degrading in quality.

For most people, viewing angles on VA panel displays aren’t an issue unless you have a lot of people in the room watching the TV at various angles.

The main downside of IPS technology is the lower contrast ratio.

The NANO85 has a contrast ratio of around 1500:1, so blacks will appear somewhat grayish in dark or dim-lit rooms. Local dimming is supported, but as there are only several dimming zones, it’s not very effective.

The lack of contrast won’t be as evident in brighter rooms, which is where this TV excels, thanks to its high 550-nit peak brightness.

The TV also has a decent ~90% DCI-P3 gamut coverage; moreover, the colors are consistent and won’t shift in saturation when viewed at an angle.

With a pixel response time speed of ~16ms, some trailing will be visible in fast-paced games, but to a tolerable degree.

120Hz is also natively supported at both 1080p and 1440p, which is good news since most games are too demanding for a high frame rate at 4K, even with high-end hardware.

What’s more, the TV supports FreeSync and even though it’s not officially certified as ‘G-SYNC Compatible’ by NVIDIA, you can use it with HDMI 2.1 compatible graphics cards with a 48-120Hz VRR range.

In some cases, however, brightness flickering is noticeable when your frame rate fluctuates around 48FPS as LFC (Low Framerate Compensation) is triggered. The intensity of flickering varies across different units of the TV, and depends on the game.

The TV uses PWM dimming at 240Hz, which shouldn’t bother most users. It’s based on WebOS, supports 4:4:4 chroma, and can remove 24p judder from any source.

Both 30FPS and 60FPS framerate interpolation is supported for the soap opera effect, and there’s a BFI feature called TruMotion for less motion blur.

So, if you don’t like the LG 49NANO85 because of its IPS panel, you’ll have to either get a larger 120Hz TV or invest in one of the two TVs we’ll get into next.

The Samsung QN90A is by far the brightest TV in this list with a stellar 1800-nit peak brightness for incredibly vivid highlights of the HDR picture.

The contrast ratio is also impressive for a LED-backlit display at around 26,500:1 thanks to its Mini LED backlight and great local dimming algorithm, while the ~95% DCI-P3 gamut coverage ensures rich colors.

OLEDs still offer noticeably deeper blacks with no backlight bleeding or haloing, but they don’t get nearly as bright and suffer from the risk of burn-in.

The Samsung QN90A TV also has a fast ~9ms pixel response time speed, which results in only minor and mostly negligible visible trailing behind fast-moving objects.

The TV supports 120Hz at 1080p, 1440p and 4K UHD, allowing you to take advantage of its high refresh rate on any compatible device.

Variable refresh rate (FreeSync and G-SYNC Compatible) is supported, as well as BFI (at both 60Hz and 120Hz) and framerate interpolation. It can also remove 24p judder from any source, supports 4:4:4 chroma and it’s based on Tizen OS.

The Samsung QN50QN90A uses PWM dimming at a very high 960Hz dimming frequency, so it won’t bother most people sensitive to flickering.

The TV has a slim and modern design with thin bezels and 200x200mm VESA mount compatibility.

While the LG C1 has a notably lower 800-nit peak brightness than the Samsung QN90A, the main advantage of the OLED technology is basically infinite contrast ratio as there’s no backlight and each pixel is self-emissive.

This results in true blacks, amazing HDR image quality, and no backlight bleeding.

Additionally, the colors are exceptional thanks to the wide ~97% DCI-P3 gamut coverage and OLEDs also have the best viewing angles making the image flawless at basically an angle.

The main disadvantage, however, is the risk of permanent burn-in and temporary image retention.

If you leave your TV on for a long time with an image that has static elements (like TV channel logo), there’s a risk that it will permanently ‘burn in.’

As long as you’re careful though, this won’t be an issue and there are plenty of built-in features (screen savers, pixel refreshers, etc.) that help prevent burn-in and image retention.

For a more detailed explanation of OLED screen burn-in, you can check out our dedicated article. You can also read our full LG OLED48C1 review for additional information.

Yet another big advantage of OLEDs is the instantaneous <1ms pixel response time speed, which prevents overshoot and trailing behind fast-moving objects.

Input lag is excellent as well, amounting to ~14ms at 60Hz or ~7ms at 120Hz for no perceptible delay while gaming.

Both FreeSync and NVIDIA G-SYNC Compatible VRR technologies are supported up to 120Hz at 1080p, 1440p, and 4K for tear-free gameplay.

Using the OLED Motion Pro feature, you can insert black frames in order to reduce perceived motion blur at both 60Hz or 120Hz.

The TV is based on WebOS, it can remove 24p judder from any source, supports 4:4:4 chroma, and there’s a framerate interpolation feature for the soap opera effect.

PWM is not used to regulate brightness, but there’s a very slight and essentially unnoticeable shift in brightness every ~8ms.

The OLED panel allows the TV to be exceptionally slim, as you can see in the image above. It also has a 300x200mm VESA mount compatibility.

If the C1 is out of your price range, you might find the 2020 CX model for a lower price. It has the same key specifications and features.

Overall, you can’t go wrong with the LG OLED48C1 or the Samsung QN50QN90A, depending on your preference.

In case you’re on a tight budget, the TCL 50S435 offers excellent image quality and performance for the price, but we recommend saving up for the Vizio M50Q7-J01 to get the best value for your money.