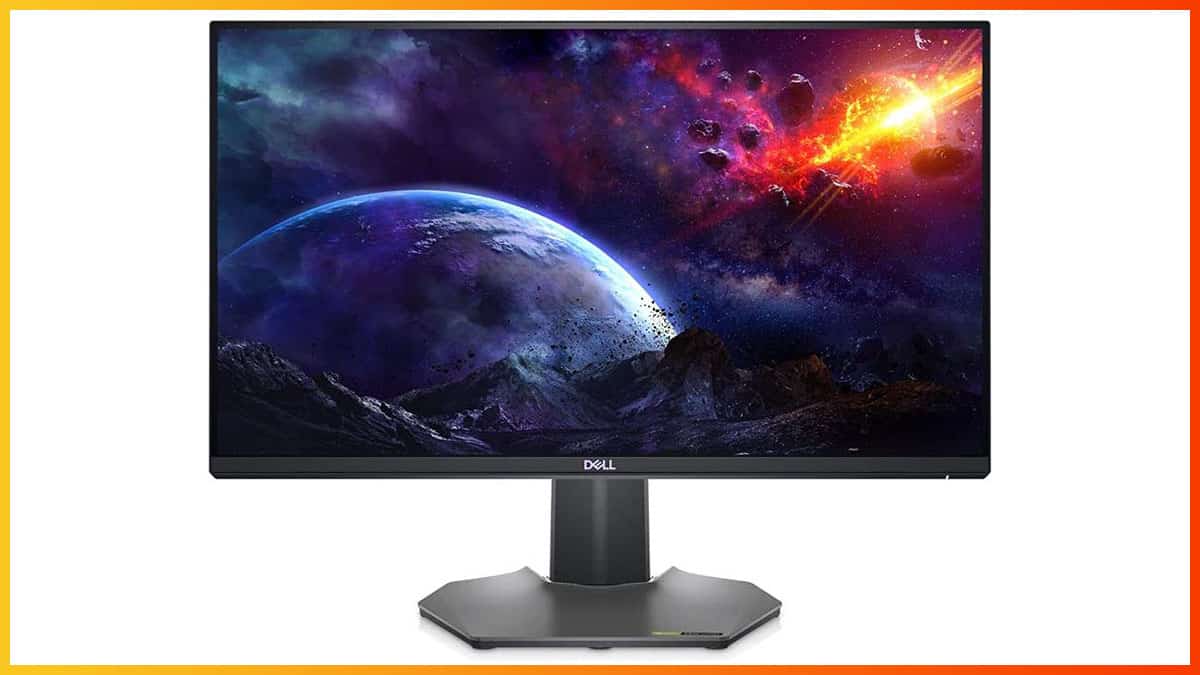 The Dell S2522HG is one of the best budget 240Hz gaming monitors thanks to its affordable price, quick response time speed, AMD FreeSync (G-SYNC Compatible) support and IPS panel with accurate colors and wide viewing angles. Moreover, it has a fully ergonomic design and rich connectivity options!

There are quite a lot of 1080p 240Hz IPS gaming monitors to choose from. The Dell S2522HG is one most affordable models yet it doesn’t seem to skimp on anything, such as design or connectivity options – so, what’s the catch?

Unlike most 240Hz models, the Dell S2522HG doesn’t offer MBR (Motion Blur Reduction) and HDR (High Dynamic Range) support. Is this something you wouldn’t be using anyway or a big omission on Dell’s part? Let’s find out!

The monitor uses the same IPS panel found in the other 24.5″ 1080p 240Hz displays. So, you get the flawless 178° wide viewing angles, ensuring that the picture remains perfect regardless of the angle you’re looking at the screen.

Further, the Dell S2522HG can get more than bright enough even in well-lit rooms thanks to its peak brightness of 400-nits, while the static contrast ratio amounts to around 1,000:1, which is standard for IPS monitors.

So, you won’t get as deep blacks as that of VA monitors with a contrast ratio of around 3,000:1, but if you want to combine inky blacks with a high refresh rate and fast response time speed, you’ll need to invest a bit more in something like the Samsung C27G75T (~$550).

Using an IPS panel display also means some IPS glow will be noticeable, but this is the expected drawback of this technology and its intensity varies between different units of monitors. In most cases though, it’s completely tolerable or negligible.

Moving on, the Dell S2522HG monitor covers the entire sRGB color space and supports 8-bit color depth natively for 16.7 million colors. So, you can even do some basic color-critical work on this display.

While the other 1080p 240Hz IPS models support HDR and have VESA’s DisplayHDR 400 certification, the Dell S2522HG does not.

However, this isn’t a big deal because the HDR support on those monitors is meaningless anyway as they don’t support a wide color gamut, local dimming or high enough brightness/contrast for a noteworthy HDR viewing experience.

So, you’re not losing anything by not having HDR on the Dell S2522HG.

Lastly, the 1080p resolution results in a decent pixel density of 90 PPI (pixels per inch) on the 24.5″ viewable screen of the monitor. You get a decent amount of screen space and fairly sharp details and text. More importantly, 1080p is not very demanding on your GPU/CPU, allowing you to maintain a high frame rate in games.

Of course, the main selling point of the monitor is the rapid 240Hz refresh rate.

While the difference between 240Hz and 144Hz is not as noticeable as it is between 60Hz and 144Hz, it’s definitely there, and if you want the smoothest gaming experience with minimal input lag, it’s worth the extra cost.

It goes without saying that the Dell S2522HG is intended for those who play fast-paced low-demanding eSports titles in which reaching those high frame rates shouldn’t be an issue for most PC builds.

However, even if you can only get around 144FPS at the moment, you should take future-proofing into account. A good monitor should last you at least one or two (or more) CPU/GPU upgrades and since a 240Hz monitor is nowadays not that much more expensive than a 144Hz model, it’s worth the investment for competitive gaming.

If you’re also using your monitor for work or other types of games as well, then a 1440p 144Hz display is worth considering too.

The Dell S2522HG supports variable refresh rate (VRR) with both AMD’s FreeSync Premium and NVIDIA’s G-SYNC Compatible certifications. This allows you to synchronize the display’s refresh rate to GPU’s frame rate and completely eliminate screen tearing up to 240FPS at no perceptible input lag penalty.

For instance, at 144FPS, the monitor changes its refresh rate to 144Hz, so you get 144 whole frames per second without any tearing or stuttering. Input lag would still be slightly lower at 240Hz, but then you would get tearing.

The difference in input lag is subtle, but screen tearing is also hardly noticeable at such high frame/refresh rates, so whether you should enable or disable VRR will depend on your personal preference and can vary from game to game.

We recommend sticking with the Super Fast mode because Extreme is too aggressive and adds pixel overshoot, that is, inverse ghosting.

With the Super Fast mode, there’s no noticeable ghosting or overshoot, allowing you to enjoy fast-paced content without any visual artifacts.

Input lag is imperceptible at around 4ms, so you won’t be able to notice any delay between your actions and the result on the screen.

At the rear of the monitor, there’s a directional joystick for easy navigation through the OSD (On-Screen Display) menu.

Below the joystick, there are four additional hotkeys (three of which can be assigned to different shortcuts), while the power button is on the right-hand side of the monitor.

Besides the standard image adjustment tools, such as brightness, contrast, color temperature and aspect ratio, you’ll also find the sharpness and hue/saturation settings, but there are no gamma options.

The backlight of the monitor is completely flicker-free and there’s an integrated low-blue light filter (the ComfortView picture preset).

One feature the Dell S2522HG is missing in comparison to its alternatives is Motion Blur Reduction technology.

While the monitor is just as fast as the other 24.5″ 1080p 240Hz IPS models, it cannot reduce perceived motion blur via backlight strobing.

Now, note that backlight strobing introduces screen flickering that’s invisible to the human eye, but those sensitive to flicker can get headaches or eye strain after prolonged use.

Further, while MBR is active, it reduces picture brightness and most MBR implementations cannot be enabled at the same time as VRR.

In other words, MBR is not for everyone and a lot of casual players wouldn’t be able to tell the difference or would consider it too minor to care. There’s no way of telling whether it’s something you would like to use without actually trying it first though.

In addition, for optimal performance, MBR needs to run at a lower than maximum refresh rate, which results in a bit higher input lag.

Most gamers will just run games at 240Hz with uncapped frame rates and without MBR or VRR, which is what the Dell S2522HG is perfect for.

Either way, if you want excellent MBR performance, we recommend the ViewSonic XG2431, which has its MBR implementation tuned by Blur Busters, who helped develop and popularize backlight strobing in the first place.

If you’re looking for something similar with MBR, we recommend the ViewSonic XG2431 with Blur Busters approved backlight strobing implementation.

At its discounted price, the Dell S2522HG is the best budget 240Hz gaming monitor for competitive players.