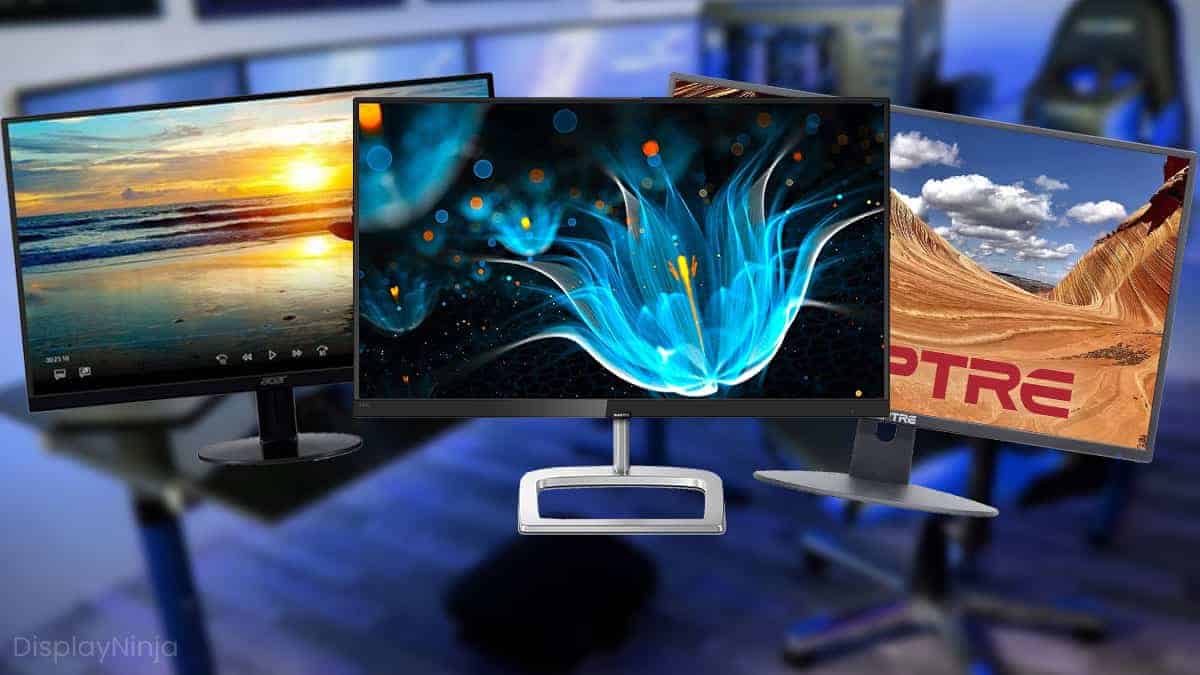 Want a new monitor for gaming and everyday use that’s cheap but also good and reliable? Afraid you won’t pick the best option due to the tons of research that has to be done that you simply can’t find the time to do?

We’ve done the research for you!

In this guide, you’ll find all the best displays available for under $150  — and we’ll help you pick the perfect one for you. 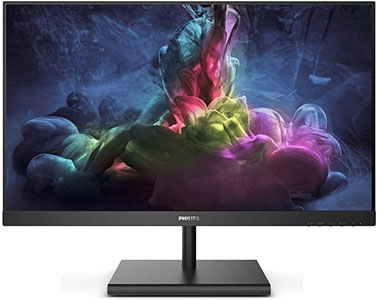 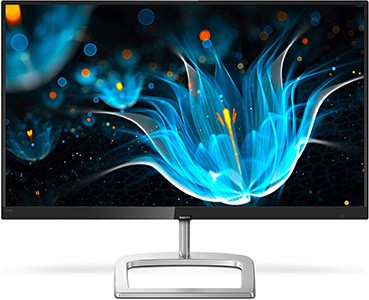 Due to the high demand of budget ~24″ 1080p 60Hz/75Hz monitors and component shortages, prices are often fluctuating. So, if any of the included monitors go for over $150, be sure to check out the alternatives we mention in the reviews below.

Further, feel free to leave us a comment if you need help picking the best monitor for you and we’ll gladly help you out!

You can view our changelogs for this buying guide at the end of this article. 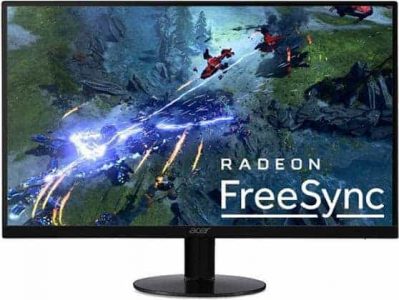 While the Acer SB220Q used to go for around $90 before the whole component shortage situation and was our top-recommended model for under $100, it usually goes for ~$125 nowadays.

It’s still the cheapest good monitor we can recommend at that price if you’ve got a limited budget.

The Acer SB220Q uses an IPS panel, which provides you with consistent and vivid colors, while the 178° wide viewing angles ensure that the image will remain basically flawless regardless of the angle you’re looking at the screen.

Further, it has a peak brightness of 250-nits meaning that the monitor will be able to get more than bright enough under normal lighting conditions.

In particularly bright rooms with big windows and no blinders/curtains, it might not be able to get bright enough to mitigate glare, but there aren’t any brighter monitors at this price range.

As expected from IPS monitors, there’s some IPS glow, characterized as visible glowing around the corners of the screen. Its intensity varies from the viewing angle and from unit to unit, but it’s completely manageable in most cases.

Another weakness of IPS monitors is the mediocre contrast ratio of 1,000:1, so you won’t get quite as deep blacks as that of VA monitors with around 3,000:1 contrast ratio, however, VA technology has its own flaws, such as slower response time and not as consistent colors, which we’ll get more into when we get to our VA monitor picks.

Since the SB220Q has a 21.5″ viewable screen, the Full HD resolution results in a generous pixel density of 102 PPI (pixels per inch). So, you get a tad more screen space and detail clarity in comparison to the standard 24″ 1080p monitors.

The FreeSync range is 48-75Hz on this display, so as long as your FPS (Frames Per Second) is within that, there’ll be no tearing or stuttering. Using CRU, you might be able to extend that range a bit to ~40-75Hz.

Since the SB220Q doesn’t have a DisplayPort input, FreeSync can only be used over HDMI with supported AMD cards.

The 75Hz provides you with a small but noticeable boost in motion clarity in comparison to the standard 60Hz displays. Further, thanks to the monitor’s quick response time and low input lag, you get an enjoyable and responsive gaming experience.

Check out our full Acer SB220Q review for more information.

The design of the monitor is slim with ultra-thin bezels, but the stand is tilt-only and not VESA mount compatible. Connectivity options include HDMI 1.4 and VGA. There are no audio jacks.

A 24″ sized monitor with the Full HD resolution has a pixel density of around 93 PPI, which is a downgrade in comparison to the SB220Q. However, the difference is not that noticeable in real use and most users will prefer the bigger size of a 24″ screen.

Just like the SB220Q, the Philips 246E9 has an IPS panel with wide viewing angles and consistent colors, but it also has a wider 129% sRGB color gamut size, resulting in richer and more lifelike colors.

The peak brightness and contrast ratio are standard at 250-nits and 1,000:1, respectively and AMD FreeSync is supported with a 48-75Hz range over HDMI.

Check out our full Philips 246E9QDSB review for more details.

The monitor has diverse connectivity options with DVI-D, HDMI 1.4, VGA and a headphone jack available.

The stand of the monitor is tilt-only, but it’s VESA mount compatible via the 75x75mm pattern. If you’re using a 100x100mm mounting plate, it might cover the display’s inputs, so you might need to cut off that part or get a 75x75mm-only plate.

The following monitors offer additional features, but they’re usually over $150. It still might be worth checking them out: 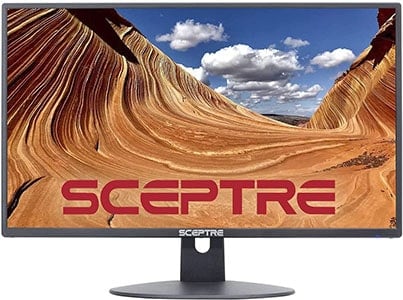 Since it’s based on a VA panel, the Sceptre E248W offers a high 3,000:1 static contrast ratio, resulting in significantly deeper blacks in comparison to IPS monitors.

On top of that, there’s no IPS glow, which makes this monitor especially great for playing games and watching videos in a dark room.

However, the colors and viewing angles aren’t as consistent as they are on IPS monitors, but unless you’re doing color-critical work, it won’t be an issue.

VA monitors at this price range also have a slower response time speed, so you might notice some smearing behind fast-moving objects in dark scenes. For everyday use and casual gaming, the amount of ghosting is tolerable or even negligible, but if you play FPS games competitively, you should be getting get a faster monitor anyway.

The peak brightness is the same as that of all budget monitors at 250-nits.

Check out our Sceptre E248W review for more information.

The stand of the monitor is tilt-only, but the screen is VESA mount compatible via the 100x100mm pattern. The bezels are reasonably thin, but not ‘ultra-thin.’

The cheapest 144Hz gaming monitor at the time of this writing is the LG 24GL600F, on sale for $155. However, it uses a TN panel with inferior color quality and viewing angles. Still, it has a fast 1ms GtG response time speed, making it a viable option for those who mainly play competitive FPS games. 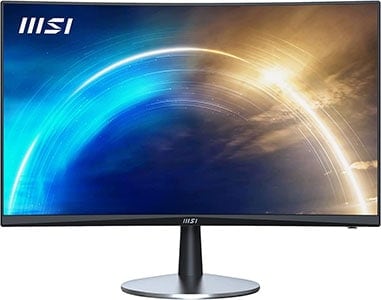 Want a curved monitor? The MSI Pro MP242C is the best model available for under $150!

In truth, such curvature is very subtle on a 24″ monitor, so the added immersion is minimal. The monitor is still a good option as you’re not paying more for the curved screen.

In fact, the MSI MP242C has plenty of useful features, including FreeSync up to 75Hz, 1ms MPRT backlight strobing technology and MSI’s Display Kit desktop application for quick and easy OSD-related settings adjustments.

The stand of the monitor is tilt-only, but the screen is VESA mount compatible via the 100x100mm pattern.

Connectivity options include one HDMI 1.4 port, one VGA port, a headphone jack and 2x2W integrated speakers.

If you can find them on sale, they are the best options under $150 for casual gaming, watching videos and everyday use. However, due to their VA panels with slow response times, they’re far from ideal when it comes to competitive fast-paced games.

In case you play FPS games competitively, you should invest a bit more in a 1080p 144Hz gaming monitor with an IPS panel for faster response times, which can sometimes be found on sale for as low as ~$160. Here’s a list of all such monitors available, clicking on the ones not in bold will take you to a review.

Did you find the best monitor under $150 for you?

Feel free to leave us a comment below if you need help picking the model that’s most suited for you!

Overall, the Sceptre E248W-19203R, the MSI MP242C and the Philips 246E9QDSB offer good value for money; you can pick between them depending on your personal preference.

For gaming, you should consider investing a bit more money in a 144Hz model with an IPS panel, but if you can’t afford it (or can’t find one on sale), the Philips 242E1GSJ will do just fine as long as you’re not too sensitive to smearing.