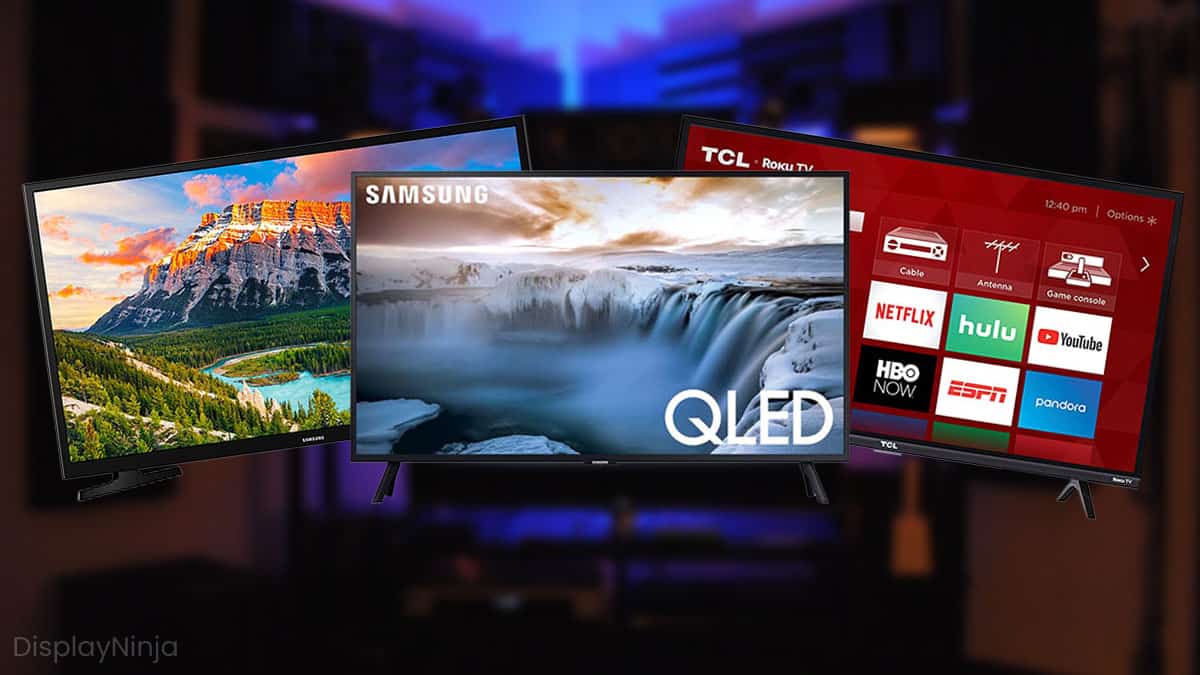 If you’re looking for a new 32-inch TV, you’ve come to the right place!

We’ll narrow down your selection to the best and most cost-effective 32″ TVs available, and fill you in on everything you need to know in order to choose the best one for you! 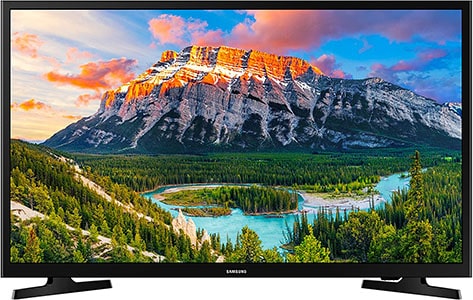 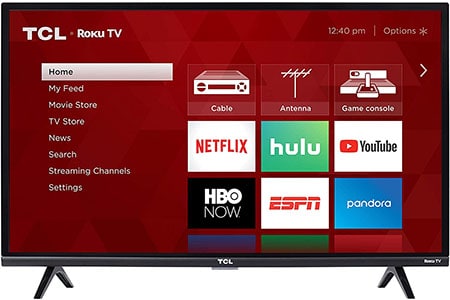 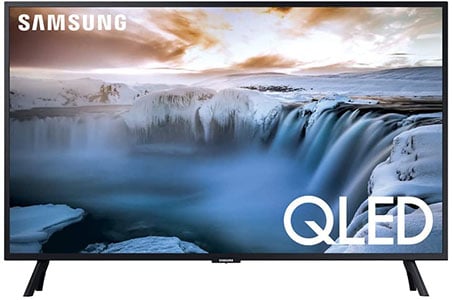 The choice between which of these TVs is the best one for you comes down to your budget and what you’ll be using the TV for.

In the reviews below, we’ll cover what each TV’s strengths and weaknesses are, so that you can pick the best one for your use case with peace of mind.

We’ll also mention if there are any alternatives worth considering, including PC monitors with similar specifications and prices.

TCL’s S325 and S327 series are our top-recommended budget TV series for console gaming due to their low input lag and decent pixel response time speed.

However, these TVs have other advantages too, such as a high contrast ratio and the responsive Roku TV OS, which make it a great budget TV overall!

Now, the peak brightness of the S327 barely reaches 200-nits, so the TV can’t get particularly bright. This means that if you plan on using the TV in a room that has plenty of light, its brightness won’t be very effective at mitigating glare.

In a dark room, on the other hand, the TV’s high contrast ratio takes the spotlight by providing you with deep blacks and vivid details in the shadows of the picture. In this case, the low brightness won’t be as much of an issue.

Whether the difference in image quality between these two resolutions on a 32″ TV will be noticeable mainly depends on the distance you’ll be watching the screen from.

Moving on, the TV has a DCI-P3 gamut coverage of around 80%, which makes for standard color quality, nothing spectacular, as expected at this price range.

One disadvantage of VA panel TVs are the viewing angles. Some minor shifts in color, contrast and brightness can be noticed when watching the TV at an angle, but nothing too extreme.

What makes the TCL 32S327 great for gaming is its low input lag of ~12ms, which makes for imperceptible delay between your actions and the result on the screen.

Note that you will need to enable ‘Game Mode’ to reduce input lag.

Pixel response time speed is decent as well, at around ~15ms. There is no prominent trailing behind fast-moving objects, apart from some dark smearing in darker scenes as pixels take longer to change from dark into bright pixels.

In fact, this TV has better input lag and response time performance than many significantly pricier models.

As with most TVs, the TCL 32S327 uses PWM (Pulse With Modulation) to regulate brightness below the maximum level. When setting the brightness to 31/100 or below, there’s a 180Hz dimming frequency that might cause issues to people sensitive to flickering after watching the TV for extended periods of time.

This flicker can also function as a BFI (black frame insertion) feature as it reduces the perceived motion blur of fast-moving objects.

The TV is based on Roku TV OS, which is quite responsive and easy to use. It’s possible to remove 24p judder from DVDs and Blu-rays, but not from streaming apps, PC, or cable/satellite. Framerate interpolation (soap opera effect) is not available either.

Finally, the TCL 32S327 supports 4:4:4 chroma in PC mode, so if you hook it up to your PC, text won’t look smudgy on colored backgrounds.

The TV is reasonably thick, has thin bezels and 100x100mm VESA mount compatibility.

ARC (Audio Return Channel) is supported over HDMI3, while the supported audio passthrough formats include DTS and Dolby Digital.

There’s no Ethernet port, but WiFi is supported (2.4GHz and 5GHz).

The TCL S325/S327 is pretty much the best budget TV with a VA panel you can get.

The N5300 is based on an IPS panel, so you won’t get as deep blacks. In fact, with a static contrast ratio of around 1000:1, blacks will appear somewhat grayish in comparison to the S327.

However, if you’re watching the TV in a particularly bright room, then black depth and shadow detail clarity are mostly lost anyway.

IPS panel displays also offer superior viewing angles to the VA technology. You can watch the screen at basically any angle without the image degrading in quality.

Although the TV supports HDR10, the content won’t look much better due to the limited contrast ratio, brightness and color gamut. In other words, you aren’t getting the true HDR viewing experience – which is, naturally, expected at this price range.

You just get a small boost in peak brightness for HDR content.

Sadly, the TV has a rather high input lag of ~50ms. You would be able to notice delays while playing video games, but this won’t be an issue for other use.

Response time is a bit better at ~18ms, but ghosting will be noticeable, especially in darker scenes of fast-paced games.

To regulate the brightness below the maximum, the TV use PWM at a frequency of 120Hz, which helps clear up motion blur, but might bother those sensitive to flickering.

The TV doesn’t support framerate interpolation and it can’t remove 24p judder from any source, but 4:4:4 chroma is supported in the PC mode.

Based on Tizen 2018 OS, the TV’s interface is not quite as smooth as Roku TV, but it’s still decent and offers plenty of applications.

The TV is not quite slim as the S327 and it has a bit thicker bezels, but it’s not too bulky. It’s also 100x100mm VESA mount compatible.

So, what makes this TV so great?

To start with, it features 4K UHD resolution, which on the 32″ screen of the TV results in a very high pixel density of roughly 140 PPI (pixels per inch).

Details are crisp and sharp, but to actually notice these extra details, you’d need to be about 2ft (60cm) away from the TV. The further away you are from it, the less you will see the benefits of higher resolution.

For instance, at 5ft away, the difference between 1080p and 4K resolution on a 4K TV is basically not noticeable.

However, the resolution is not the only thing that makes the image quality on the Samsung Q50R so good. It has a high 5500:1 contrast ratio for deep and inky blacks, solid 300-nit peak brightness and ~90% DCI-P3 gamut coverage for more saturated and vibrant colors!

Unlike the other TVs mentioned in this article, the Samsung 32Q50R also supports 10-bit color depth for 1.07 billion colors (as opposed to 16.7 million colors with 8-bit depth), which makes for less banding and smoother gradients.

In addition to the standard HDR10 support, it also supports the HLG (Hybrid Log Gamma) and HDR10+ HDR formats.

Input lag is low at ~11ms, while the pixel response time speed is decent at ~15ms, which makes the TV great for gaming.

PWM dimming is used for luminance regulation below the maximum, but it uses a 240Hz frequency, which shouldn’t bother most people sensitive to flickering.

The TV supports 4:4:4 chroma, 30FPS motion interpolation and BFI, but it can’t remove judder from 24p sources. Most people prefer not to use motion interpolation though, as it creates the soap opera effect, whereas the BFI feature is usually useless at 60Hz since it causes double images.

Did you find the best 32-inch TV for you? Leave us a comment if you need any help picking a new TV!

In short, if you want a cheap but good 32-inch TV for gaming and watching movies in a dark room, the TCL S327 is for you!

If you don’t care about gaming and want a TV that’s better suited for bright rooms, get the Samsung 32N5300.

Finally, if you want a premium 32-inch TV, you won’t find anything better than the Samsung 32Q50R.