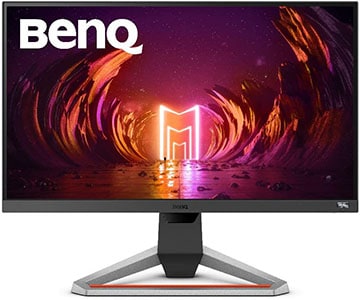 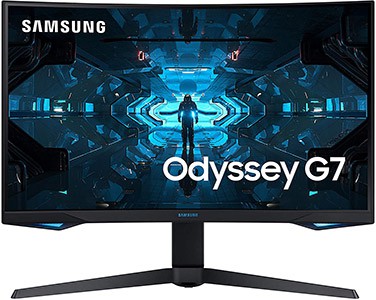 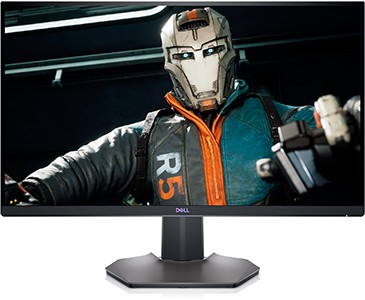 Need a new monitor for the PS5 or the Xbox Series X that will take advantage of your console’s mighty hardware?

To unleash the full power of these gaming consoles, you’ll ideally need a monitor with an HDMI 2.1 port for 4K 120Hz support.

At the moment, there aren’t any HDMI 2.1 gaming monitors available, but we will list all of the upcoming such displays here, so that you can keep an eye on them.

Note that these 4K 120Hz gaming monitors will be quite expensive and that the PS5 and the Xbox Series X won’t be able to sustain 120FPS at 4K in many games.

These displays are a lot more affordable and you still get that significant kick in motion clarity from 60Hz as getting 120FPS is a lot easier at 1080p and 1440p in comparison to 4K.

Keep in mind that not all 1080p 144Hz gaming monitors necessarily support the 1080p 120Hz mode on consoles.

Luckily, both of BenQ’s monitors are excellent! They offer vibrant colors and fast response time speed for an immersive and responsive gaming experience.

The main difference between the BenQ EX2510 and the BenQ EX2710 is in their screen size, and therefore, pixel density (pixel-per-inch ratio).

Because the BenQ EX2510 has a smaller 24.5″ viewable screen, the pixels will be denser, which results in more screen real estate as well as sharper details and text.

On the BenQ EX2710, the picture quality will be somewhat pixelated in comparison. So, if you want a generally better image quality, we recommend going with the EX2510 model.

It’s based on a 24.5″ IPS (In-Plane Switching) panel. This technology offers 178° wide viewing angles, so the picture won’t shift in brightness, contrast, or color if you look at the screen at skewed angles.

Further, the BenQ EX2510 features accurate and consistent colors with 100% of the sRGB color space coverage.

Its static contrast ratio amount to 1,000:1, which is standard for IPS panel monitors.

You won’t get as deep blacks as that of VA panels with a ~3,000:1 contrast ratio, but this panel technology has advantages of its own at this price range, such as slower response time and not as consistent colors.

Further, the BenQ EX2510 monitor has a strong 400-nit peak brightness, so the picture will be more than bright enough even in well-lit rooms.

Next, it has a quick 2ms GtG pixel response time speed for minimal trailing visible behind fast-moving objects and low input lag of ~4ms, which makes for imperceptible delay.

It also supports HDR (High Dynamic Range), but due to its lack of wide color gamut and local dimming, HDR picture quality is underwhelming. Naturally, this is expected from a 1080p display at this price range.

This technology allows the monitor to change its refresh rate dynamically, according to the frame rate generated by the GPU.

As a result, all screen tearing and stuttering is gone with no perceptible input lag introduced, like it’s the case with V-Sync.

Even when your FPS (Frames Per Second) drops below 48, AMD LFC (Low Framerate Compensation) kicks in with framerate multiplication (47FPS -> 94Hz) to keep tearing at bay.

There’s also a feature called Blur Reduction, which can reduce the amount of perceived motion blur by backlight strobing at a cost of image brightness.

However, Blur Reduction cannot be active at the same time as FreeSync.

How To Change The Refresh Rate To 120Hz

If you are having trouble selecting 120Hz at 1920×1080 on your console, try adjusting the following settings:

As other monitor manufacturers haven’t disclosed if their 144Hz displays will support the 120Hz mode on the PS5 and the Xbox Series X/S, and since a lot of monitors haven’t yet been tested, we recommend sticking with the BenQ EX2510 and EX2710 models.

Should a better alternative appear, we’ll update the article. However, the BenQ EX2510 is our top-recommended 1080p 144Hz gaming monitor for PC gaming under $250 too, so you can’t go wrong with it.

Other confirmed 1080p 144Hz gaming monitors that support the 1080p 120Hz mode on the PS5 are the AOC C27G2 and the BenQ XL2411K. However, we still recommend getting the BenQ EX2510 as it offers better value for the money and the best balance between image quality and performance.

The BenQ XL2411K is a good alternative for competitive gaming as it has a TN panel with a slightly faster response time speed and the DyAc (Dynamic Accuracy) backlight strobing technology with lower brightness penalty and less strobe crosstalk.

However, it has inferior image quality and narrow viewing angles. It’s designed for professional gamers, so consider it only if you’re willing to sacrifice image quality for the slightest advantage.

PS5 doesn’t support the 1440p resolution natively. Sony said that they may add support for it via a firmware update if there’s enough demand for it.

Now, some 1440p monitors can accept the 4K UHD signal from the PS5 and downscale it to 1440p, so that the picture won’t look blurry but rather very close to native 4K.

So, for PS5, you’re stuck with 1080p 120Hz or 4K 60Hz until HDMI 2.1 monitors become available. You can check out the best 4K 60Hz console gaming monitors in our dedicated PS4 Pro and Xbox One X monitor guide.

Further, not all monitors that support 1440p 120Hz can also simultaneously run FreeSync, so we’ve selected only the best options for you below.

The Dell S2721DGF is one of the rare 1440p 144Hz+ gaming monitors that supports the 1440p 120Hz mode on the Xbox Series X and Series S – and that can simultaneously run FreeSync for tear-free gameplay.

This is a popular PC gaming monitor thanks to its fast Nano IPS panel with a 1ms GtG pixel response time speed for zero ghosting in fast-paced games.

The Nano IPS panel also provides you with a wide 98% DCI-P3 color gamut for vibrant and saturated colors. Other specifications include a 1,000:1 static contrast ratio and a 400-nit peak brightness, which is standard for IPS monitors at this price range.

Note that the monitor supports HDR, but you cannot activate it on the Xbox Series consoles as it cannot send a 4K signal.

You’re not exactly missing anything great here as the Dell S2721DGF would need a much higher contrast ratio and brightness for a noteworthy HDR viewing experience.

Other interesting features of the monitor include Dark Stabilizer (for better visibility in dark areas of games), various pre-calibrated picture modes for different genres, an on-screen timer, and a refresh rate tracker.

For PC, the monitor supports up to 165Hz at 2560×1440, and it has both NVIDIA’s G-SYNC Compatible and AMD’s FreeSync Premium Pro certifications.

Unlike the Dell S2721DGF, the Samsung Odyssey G7 uses a curved VA panel with a higher contrast ratio for much deeper blacks. It’s available as both 27″ and 32″ sized variants with identical specifications except for the screen size, and therefore, pixel-per-inch ratio.

Granted, you won’t be able to use the monitor’s full 240Hz refresh rate, but if you want a 1440p 120Hz gaming monitor with a VA panel and a fast response time speed, you don’t have any other options.

Samsung’s G7 displays are the only widescreen VA panel monitors with a 1ms GtG response time speed currently available, which allows them to provide inky and vivid blacks without any smearing in fast-paced games.

You can also use 1440p 120Hz and FreeSync at the same time with the Xbox Series X and Series S consoles.

The Samsung G7 can also accept a 4K UHD signal from the console as well as HDR, but in this case, you are limited to 60Hz without FreeSync.

In comparison to the Dell S2721DGF, the G7 monitors have a higher 600-nit peak brightness, a higher 2,500:1 contrast ratio, 90% DCI-P3 color gamut, and 8 dimming zones, so there’s a meaningful improvement in HDR image quality.

So, you can choose between 1440p 120Hz + FreeSync in games where frame rate is more important to you for smoother performance, such as competitive FPS titles, and “4K” + HDR for the more graphically-oriented games for better image quality.

Note that the Samsung G7 monitors have a very steep 1000R screen curvature. Some users might not like it, some might love it, and some won’t give it much thought. Overall, the curvature is more pronounced on the 32″ model, but you get used to it.

Connectivity options include two DisplayPort 1.4 inputs, one HDMI 2.0 port, a headphones jack, and a dual-USB 3.0 hub. 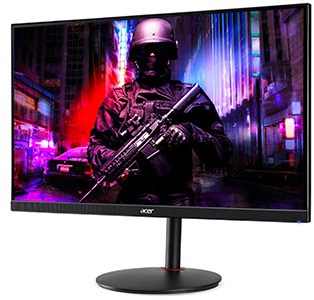 It will feature a wide 98% DCI-P3 color gamut for vibrant colors, a rapid 1ms GtG pixel response time speed for minimal ghosting, and DisplayHDR 600 certification for a meaningful HDR viewing experience via a 600-nit peak brightness and some sort of local dimming.

Other panel-related specifications are standard for an IPS panel display, such as a static contrast ratio of 1,000:1, 178° wide viewing angles, and dithered 10-bit color depth support.

The design of the monitor consists of ultra-thin bezels at the top and at the sides of the screen, while the stand offers tilt and height adjustment up to 100mm.

The Acer XV282K KV is also VESA mount compatible (100x100mm) and has an abundance of connectivity options including two HDMI 2.1 ports, DisplayPort 1.4 (with DSC support), a quad-USB 3.0 hub, a headphones jack, and dual 2W integrated speakers. 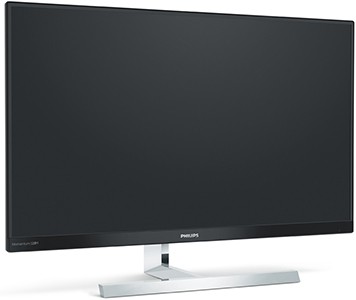 It will feature a VA panel, so you get a higher static contrast ratio for deeper blacks, but its pixel response time speed will most likely be a bit slower, so it probably won’t be ideal for competitive fast-paced gamers.

What’s interesting about the monitor’s design is that it will feature a glossy screen surface with a light matte anti-glare finish. So, the picture will be more vivid, but also a bit reflective, so you’ll have to mind the lighting.

Another cool feature is the Ambilight technology which consists of LEDs placed at the top and at the sides of the monitor (at the rear). These LEDs can be synchronized with on-screen video and audio content for atmospheric ambient lighting.

The stand offers height, tilt, and swivel adjustments as well as VESA mount compatibility, while connectivity options include three HDMI 2.1 ports, DisplayPort 1.4, a quad-USB 3.0 hub, a headphones jack, and dual 5W speakers plus a subwoofer.

The release date should be sometime in Q1 2021, whereas the price is speculated to be around 600 euros. 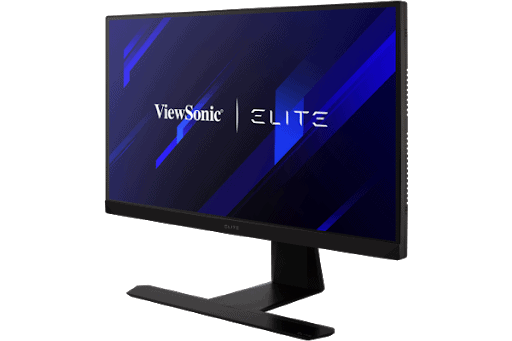 It’s unknown what panel type the monitor will have, but based on its wide 99% Adobe RGB gamut, it will most likely be IPS.

Other features include the PureXP backlight strobing technology and a gamer-inspired design with a mouse bungee, a headphones jack, and RGB lighting.

The release date is expected to be in Q1 2021, but the pricing is unknown.

If you’re after a good HDMI 2.1 gaming display, we also recommend considering LG’s OLED CX TV with a superior image quality and performance than any LED-backlit panel.

You can find the best 4K 60Hz gaming monitors in our best PS4 Pro/Xbox One X monitor buyer’s guide.

These are the best monitors for PS5 and the Xbox Series X/Series S we can recommend right now.

When it comes to 1440p 120Hz for the Xbox Series consoles, we recommend either the Dell S2721DGF, the BenQ EX2780Q, or the Samsung G7 depending on your budget and preference.