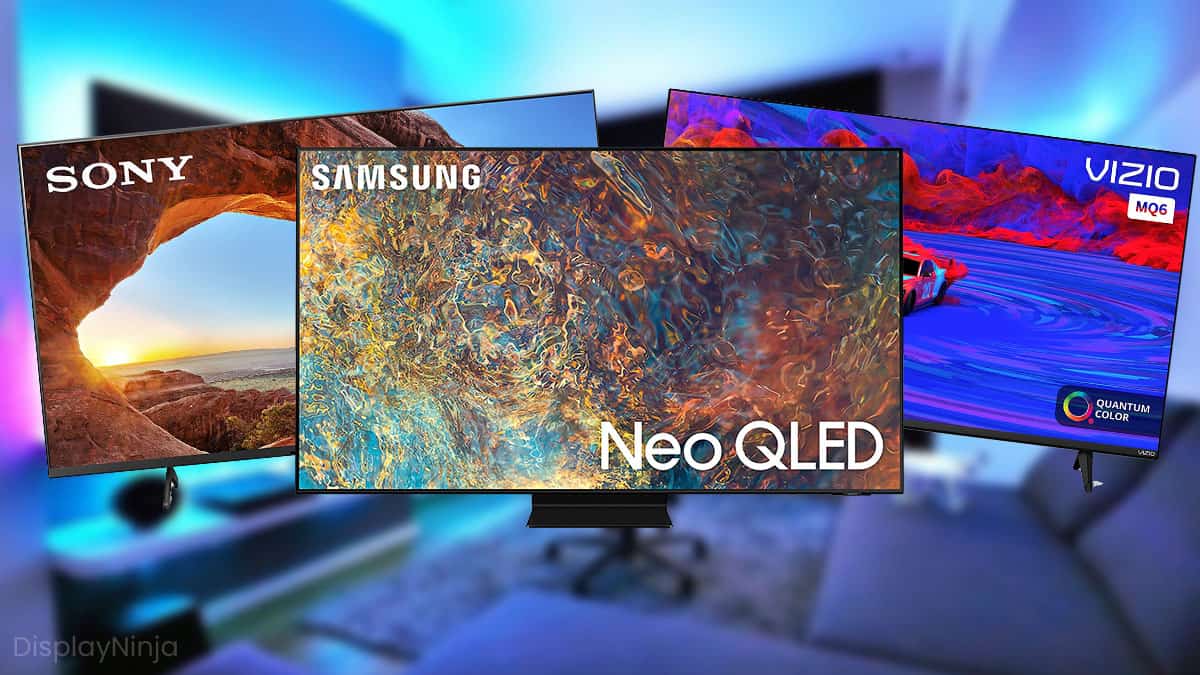 For a lot of people, a 43-inch TV is a perfect size; it’s neither too big nor too small.

Sadly, most 32″ – 50″ TV models have stripped-down features as opposed to their bigger counterparts from the same series. This can make finding the best 43-inch TV a bit confusing, which is why we’ve made this buyer’s guide!

*Recommended TV - a review section will be added soon 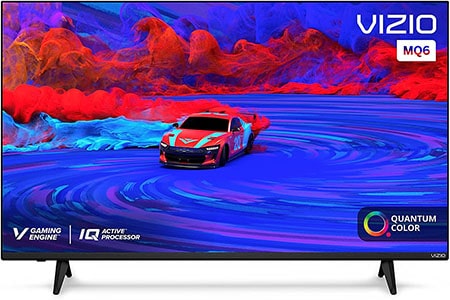 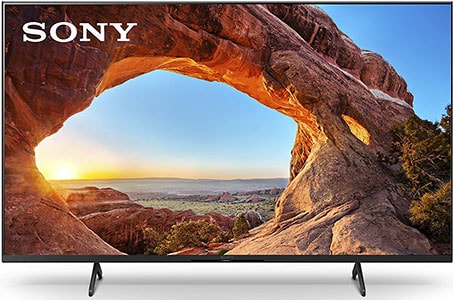 Whether you just want the cheapest 43-inch TV that’s actually good (either for gaming or watching movies) – or you want the absolute best 43-inch TV there is, you’ll find them both and everything in-between right here!

The TVs we’ve picked offer the best value for the money in their budget categories, so be sure to also check the alternative sections in the reviews below for more options.

We don’t recommend getting a 43-inch 1080p TV as the price difference is not that big, and with more and more content being available in 4K UHD, you’ll want to future-proof your display as much as possible with the 3840×2160 resolution.

4K resolution looks incredibly sharp and vivid on 43″ sized displays. In fact, many people use 43″ 4K monitors at arm’s length and don’t have any issues with image clarity.

When watching a 43″ 1080p display at a distance of ~5½ ft (168cm) or closer, individual pixels become distinguishable. On a 4K model, you can get closer to the screen (~2¾ ft or 84cm) and not notice any individual pixels.

For instance, you can get a decent 43″ 1080p TV, such as the TCL 43S325, for ~$230, but for just around $30 – $50 extra, you can get a better 4K model, which not only offers a higher resolution, but also a higher contrast ratio, a stronger peak brightness, and wider color gamut for an overall much better image quality.

You won’t find a particularly good 43″ 1080p TV with comparable specifications to that of a similarly priced 4K model, which is why we recommend going with 4K UHD, even on 43″ TVs and regardless of the viewing distance.

So, with that out of the way, let’s check out the best 43-inch TVs available! We’ll also mention similarly sized 40″ – 42″ TVs if they’re worth considering. 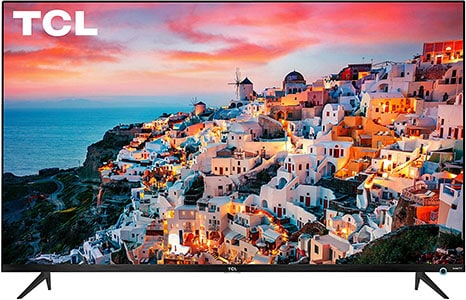 The TV is based on a VA panel with a high 6,000:1 static contrast ratio, which results in deep and inky blacks. You get vivid details in the shadow of the picture, especially if you’re watching the TV in a dim-lit or dark room.

Peak brightness is decent at around 300-nits. Highlights in HDR content won’t be as striking as that of a 1000-nit display, but this is expected at this price range.

You will be able to comfortably watch the TV in reasonably bright rooms as well, since the display’s strong brightness can overcome glare.

So, the picture of the TCL 43S525 will degrade at an angle as some minor shifts in brightness, contrast, and color can be detected, but it only becomes bothersome at extreme angles, so this won’t be an issue for most users.

Moving on, the TCL S525 also has an excellent ~90% DCI-P3 gamut coverage for rich and saturated colors, as well as 10-bit depth support for smooth gradients and less banding.

A lot of TCL’s TVs are our top-recommended budget models for console gaming due to their low input lag and decent pixel response time speed.

With just 10ms of input latency, you won’t be able to notice or feel any delays while gaming, whereas the response time speed of ~14ms efficiently eliminates most of trailing behind fast-moving objects.

Like most TVs, the TCL S525 uses PWM (Pulse-Width Modulation) to regulate brightness at levels below the maximum. Setting the brightness to 25/100 triggers a 180Hz dimming frequency, which might bother those sensitive to flickering after prolonged use.

While the S525 series supports 30FPS motion interpolation and can remove judder from 24p content, these features are only available on the 55″ and larger variants. The 43″ model does support 4:4:4 chroma, so if you connect it to your PC, you will have sharp and crisp text.

The S525 TVs are based on Roku TV OS, which is quite responsive and easy to use.

The design of the TV is slim and consists of very thin bezels and 100x100mm VESA mount compatibility.

TCL’s 5 Series from 2020, the S535, sadly does not offer a 43-inch variant, so if you’re looking for something similar, you can check out the cheaper TCL S425, though it doesn’t have as high brightness (200-nits) or as wide color gamut.

Depending on the availability and your region, you might also be interested in the following models, though we highly recommend the TCL 43S525. 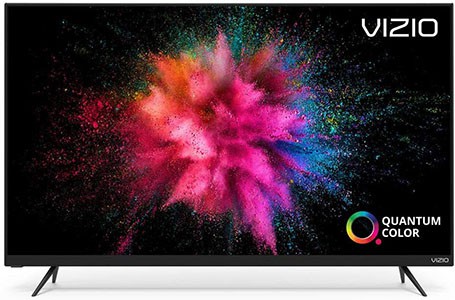 There are several things that make the Vizio M437-G0 worth the extra price over the TCL 43S525.

To start with, it’s one of the rare 43-inch TVs with local dimming.

Although there are only 12 dimming zones, they can push the display’s native 6,000:1 contrast ratio up to around 7,000:1 by dimming parts of the image that need to be dark without affecting the bright areas.

This can notably improve the viewing experience, especially when dark and bright objects in the scene are far apart.

Next, the TV has a strong peak brightness of 500-nits, which helps bring out the details in highlights of the picture, while the impressive ~97% DCI-P3 gamut coverage provides vibrant and vivid colors.

At ~20ms, the input lag of the Vizio M437-G0 TV is a bit higher than the preferred 16ms or less, though it should still be fine for casual gaming. For the competitive players out there, we don’t recommend it.

Response time, on the other hand, is decent at 16ms, so only some minor ghosting will be noticeable, mostly in darker scenes.

The TV uses the PWM method to regulate brightness at a high 480Hz frequency, which shouldn’t bother most people.

It doesn’t support framerate interpolation for the soap opera effect, but BFI (black frame insertion) is supported via the Clear Action feature, which reduces perceived motion blur at a cost of picture brightness by adding black frames between the regular ones.

4:4:4 chroma is supported as well, and it’s possible to prevent 24p judder from DVDs, Blu-rays, and streaming applications.

The TV is based on SmartCast OS, which isn’t as smooth as Roku TV of the previously-mentioned model, but it’s fairly simple to use and has plenty of apps and no ads.

The Vizio M437-G0 has a slim design with thin bezels and 200x200mm VESA mount compatibility.

Other, similarly priced alternatives include:

While the TCL S525 and Vizio M437-G0 are both great TVs, they’re from 2019, meaning that it won’t be easy to find them in stock and/or at a reasonable price.

The Vizio MQ6 2021 series is a great alternative to those TVs. It has some advantages and disadvantages, but it’s fairly priced and better than the alternatives.

The static contrast ratio is very good at 6,500:1, resulting in deep blacks, but there’s no local dimming like it’s the case with the MQ7 series. Peak brightness is also a bit lower, but decent at ~300-nits.

Further, the MQ6 2021 TVs have an excellent color gamut with ~95% DCI-P3 coverage, input lag is imperceptible at ~12ms, while the response time speed is decent with 18ms pixel transition speed.

There’s no BFI feature, but the TV supports AMD FreeSync with a 40-60Hz VRR range.

It’s based on SmartCast OS, it supports all major HDR formats, and can remove 24p judder from native streaming apps, DVDs and Blurays. 4:4:4 chroma is supported as well. 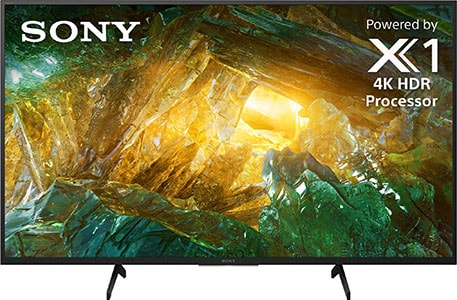 If you usually have many people in the room watching the screen at different angles and want everyone to see the picture without any degradation, you should get an IPS panel TV for its wide viewing angles, and the Sony X800H series offers the best 43-inch variant.

The Sony XBR43X800H is one of the brightest 43-inch TVs as it can reach up to 550-nits, so it shouldn’t have any problems mitigating glare even in well-lit rooms.

However, it has an inferior contrast ratio of around 1,000:1, meaning that blacks will appear grayish in comparison to blacks on VA panel TVs.

If you’re mostly watching the TV in a particularly bright room, then most of black depth and shadow details are lost anyway, and you’d benefit more from a TV with a higher peak brightness.

Colors are vivid and rich with around 90% DCI-P3 gamut coverage, so the TV is not quite as vibrant as the Vizio M7Q.

Supported HDR formats include HDR10, Dolby Vision, and HLG, but not HDR10+.

The Sony X800H input lag performance is impressive at around 10ms of delay, which is imperceptible. Pixel response time is a bit slower though at ~15ms, so some ghosting will be noticeable behind fast-moving objects in fast-paced games.

The TV is essentially flicker-free since it uses a very high flickering frequency, and only at very low brightness. It won’t bother those sensitive to flickering.

Moving on, framerate interpolation is supported for motion smoothing (also referred to as the soap opera effect) and there’s a BFI feature called ‘Clearness’ which introduces 120Hz flicker for less motion blur. It’s also possible to prevent 24p judder from DVDs and Blurays, and the TV supports 4:4:4 chroma. It’s based on Android TV 9.0 OS.

The TV supports BFI and framerate interpolation, but there’s no variable refresh rate technology available. It can remove 24p judder from any source and it’s based on Google TV OS.

Thanks to its mini LED backlight and excellent local dimming solution, the Samsung QN43QN90A is capable of reaching a peak brightness of 1800-nits and a contrast ratio of up to 26,500:1.

The color gamut is also excellent with ~95% DCI-P3 coverage, but it’s missing Dolby Vision support. Only HDR10, HDR10+ and HLG are supported.

The TV supports BFI and motion interpolation but lacks variable refresh rate support. Input lag is imperceptible at around 10ms, while pixel response time speed is great at 9ms.

It’s based on Samsung’s Tizen OS and it can remove 24p judder from any source.

Did you find the best 43-inch TV for you?

All in all, if you’ve got a limited budget, we recommend going with the Vizio MQ6, though the 2019’s MQ7 and TCL S525 are worth considering as well if you can find them.

The Sony KD-43X85J is definitely the best 43″ TV for gaming thanks to its 120Hz support, while the Samsung QN43QN90 offers the best image quality overall, but it’s quite expensive.