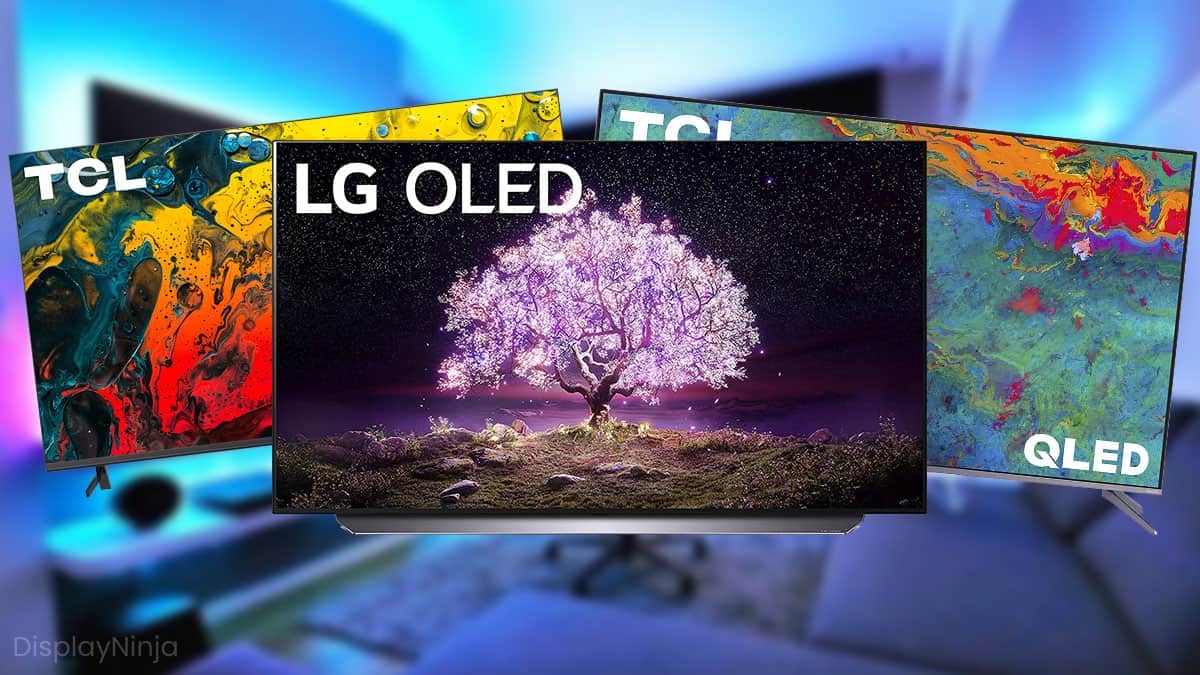 It would be a shame to hook up your brand new PS5 or Xbox Series X/S console to an old TV with washed out colors, grayish blacks, smearing, and other unwelcome visual artifacts.

Luckily, you don’t need a particularly expensive TV to put your console’s powerful hardware to good use.

Whether you need a budget 4K TV that’s good for gaming or a high-end TV that’s every gamer’s dream – we’ve got you covered! 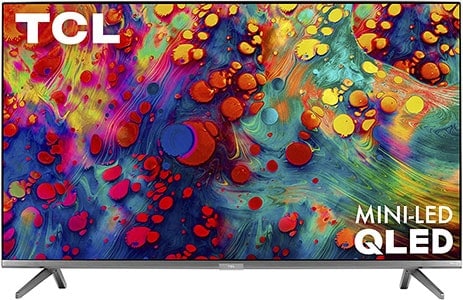 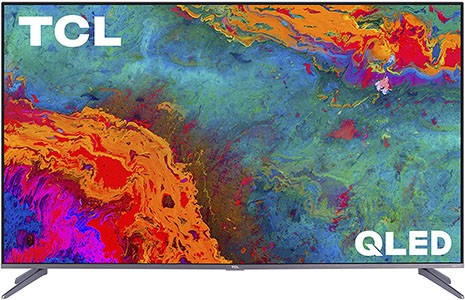 We’ll start with the most affordable TVs you should consider for gaming, and gradually move up to the more expensive models with better image quality, smoother performance, and additional features.

So, what exactly makes a TV good for gaming?

First of all, you need low input lag in order not to feel any delay between your commands and the result on the TV. For 60Hz TVs, input lag under 16ms is great, whereas for 120Hz TVs, it should be 8ms or lower.

Secondly, you’ll want a fast response time speed, which is the speed at which pixels change from one color to another. If they take too long, you will be able to notice trailing artifacts behind fast-moving objects. The faster the response time, the better.

The S535 TVs from TCL’s 2020 5-series are the most affordable 4K gaming TVs that offer low input lag and fast response time, which is why we highly recommend saving up for it.

Another reason why we recommend the TCL S535 is that it also offers an excellent picture quality for the price!

It uses a VA (Vertical Alignment) panel with a high static contrast ratio of ~7000:1, which is even higher than that of many more expensive TVs.

Local dimming is supported as well, but since there are too few dimming zones (for instance, only 48 zones on the 55″ model), it’s not particularly effective.

Sadly, it has a peak brightness of only ~450-nits, so highlights (such as explosions) fall short when watching HDR content.

Of course, if you want a really good HDR TV, you would need to invest more money as well.

Of course, if you want a really good HDR TV, you’ll need to invest more money in a TV with a peak brightness of over 1000-nits and more dimming zones.

The TV also has a wide ~95% DCI-P3 color gamut for vibrant and lifelike colors. Supported HDR formats include HDR10, HLG and Dolby Vision.

Unfortunately, the TV doesn’t support 120Hz at any resolution and it doesn’t support a variable refresh rate. The lack of these two features is expected at this price range, though.

It does support BFI (Black Frame Insertion) at 60Hz, which, as the name suggests, inserts black frames between the regular ones and thus removes perceived motion blur.

To enable it, turn on the LED Motion Clarity option in the TV’s settings menu.

You can also use motion interpolation up to 60FPS for the so-called Soap Opera Effect, though we highly recommend not using this.

There’s a 960Hz PWM flicker for brightness regulation, but such a high frequency shouldn’t cause any problems to those sensitive to flickering.

Another useful feature of the TV is the Natural Cinema mode, which can remove 24Hz judder from 24p Blu-ray/DVD content and from 60p and 60i signals, including streaming devices, cable and satellite TV, as well as streaming applications such as Netflix.

Chroma 4:4:4 is supported as well, so text won’t be fringy when using the TV as a PC monitor.

The stand of the TV is fairly sturdy and has thin bezels.

HDCP 2.2, CEC, ARC, and eARC are supported over HDMI, while other supported audio formats include DTS, DTS:X, Dolby Digital, and Dolby Atmos. 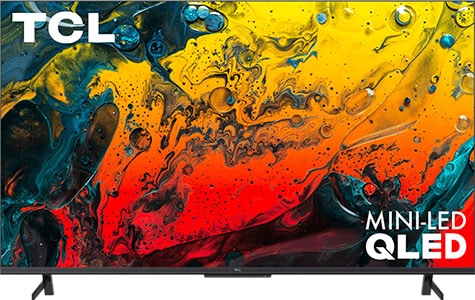 If you want to take advantage of 120Hz, TCL’s 2020 6-series TVs are the cheapest models with this feature; luckily, they are exceptionally good!

The TCL R646 has only a slightly faster pixel response time speed than the S535, so some smearing will still be noticeable in fast-paced games.

The TV refreshes the image twice as fast, essentially cutting input lag in half, thus providing you with a slight advantage over your opponents with regular 60Hz displays.

But that’s not all!

The R646 series also offers a considerably better image quality. It has a stellar peak brightness of 1200-nits and a static contrast ratio of ~8,500:1.

Further, its mini LED backlight has an excellent local dimming implementation, which can push the contrast ratio up to ~20,000:1 for even deeper blacks and punchier highlights.

Alas, there aren’t that many dimming zones (128 on the 55″ variant), so some blooming and haloing will be visible in certain scenarios.

In addition to its ~93% DCI-P3 color gamut, it delivers an eye-catching HDR viewing experience for the price. Supported HDR formats include HDR10, HDR10+, HLG, and Dolby Vision.

Additionally, AMD FreeSync is supported up to 120Hz, which allows the TV to change its refresh rate dynamically. So, at 100FPS, the TV changes its refresh rate to 100Hz and thus eliminates screen tearing and stuttering completely, without noticeably (~1ms) affecting input lag.

It also supports BFI at 120Hz via its LED Motion Clarity technology and it can interpolate frames up to 120FPS (Soap Opera Effect).

Just like the S535 series, it can remove judder from all content, it supports 4:4:4 chroma, and it has a 960Hz flicker backlight.

The TV features excellent build quality with a slim design and thin bezels.

HDCP 2.2, CEC, ARC (HDMI1 only), and eARC are supported over HDMI, while other supported audio formats include DTS, DTS:X, Dolby Digital, and Dolby Atmos. 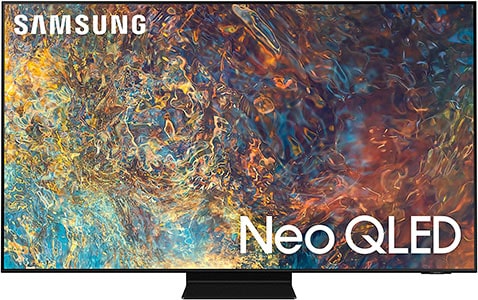 If you want something a bit better than the TCL R646, we recommend the Samsung QN90A series, however, keep in mind that the 43″ variant has a 60Hz refresh rate and no VRR support.

In comparison to TCL’s R646, you get a notably higher peak brightness of up to 1800-nits, so highlights will be even more vivid and punchy!

Further, while the native contrast ratio of the QN90A is lower at ~3,500:1, the local dimming solution is much better implemented, resulting in less blooming and an exceptional contrast ratio of up to 27,000:1.

Colors are vibrant and vivid with ~95% DCI-P3 gamut, while the supported HDR formats include HDR10, HDR10+, and HLG.

The Samsung QN90A TVs have very low input lag of ~6ms, as well as an excellent pixel response time speed of ~9ms.

So, some ghosting will be noticeable, but it’s mostly negligible.

There’s a BFI feature available called LED Clear Motion which works at both 60Hz and 120Hz, while framerate interpolation is also supported up to 120FPS.

The TV can remove judder from all content and it supports 4:4:4 chroma, while its backlight flickers at 960Hz to regulate brightness, which shouldn’t bother those sensitive to flickering due to such high frequency.

The TV has a very slim design with thin bezels at all four sides of the screen, while the stand is fairly sturdy. There are four HDMI ports, but only one (HDMI4) supports HDMI 2.1 for 4K 120Hz.

Other connectivity options include two USB ports, a digital audio-out port, a tuner, Ethernet, WiFi (2.4 GHz and 5 GHz), Bluetooth 4.2 and a 4.2.2 speaker system with 60W total.

HDCP 2.2, CEC, ARC (HDMI3 only), and eARC are supported over HDMI, while the supported audio formats include Dolby Atmos and Dolby Digital. 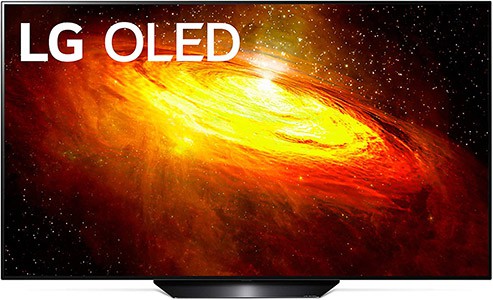 OLED TVs offer the best image quality and the smoothest performance, but they’re a bit more expensive and you have to be careful about screen burn-in.

Unlike LED-backlit displays, OLED TVs and monitors don’t rely on a backlight to produce the image as each pixel is self-emissive. This makes for a basically infinite contrast ratio. Black is black. White is white; and there’s no backlight bleeding or glowing of any kind.

Additionally, the OLED technology offers superior color quality and viewing angles. The BX has a wide ~97% DCI-P3 color gamut, and the picture will remain perfect regardless of the angle you’re looking at the screen.

Its peak brightness is a bit lower than that of LED TVs at this price range, but at ~800-nits maximum luminance for HDR content, you still get an amazing HDR viewing experience, especially in dark rooms, where the infinite contrast ratio really shines at.

The main downside of OLEDs is the risk of permanent image burn-in and temporary image retention. Basically, if you leave the TV on for a long time, the static elements of the picture can permanently burn-in.

However, there are plenty of built-in features to prevent this, such as screen savers, pixel refreshers/shifters, etc.

Image retention, on the other hand, is when the static elements (such as in-game HUDs or mini-maps) remain visible once the picture changes, but it goes away after watching different content for a while.

If you’re careful, this won’t be an issue, it’s just something to keep in mind. You can still enjoy playing your favorite games for up to ~8 hours, and then display something else on the TV so that the pixels ‘refresh.’

Many games offer ways to help with this, like hiding the HUD, scoreboards, mini-maps when not needed, etc. You should avoid using the TV as background noise or leaving it paused at game menus for hours, and you’ll be good to go.

The LG BX supports both AMD FreeSync and NVIDIA’s G-SYNC Compatible variable refresh rate up to 120Hz. So, you can use VRR with both the PS5 and the Xbox Series X and Series S, as well as with compatible AMD and NVIDIA graphics cards without any issues.

Another big advantage of the OLED technology is the instantaneous pixel response time speed, which makes for zero ghosting in fast-paced games and incredible motion clarity.

You can even use the BFI technology implementation called OLED Motion to further reduce perceived motion blur at both 60Hz and 120Hz. Framerate interpolation is also supported up to 120FPS. Input lag amounts to ~6ms, which makes for imperceptible delay.

PWM is not used for brightness regulation, but there are some luminance fluctuations every ~8ms. However, it’s not noticeable. Naturally, 4:4:4 chroma is supported and you can remove judder from any content.

Yet another advantage of the OLED technology is that the TVs are incredibly thin, as you can see from the picture.

Two HDMI ports are HDMI 2.1 (HDMI3 and HDMI4), while the other two are limited to the HDMI 2.0 bandwidth. Other supported features include HDCP 2.2, CEC, ARC (HDMI3), eARC, Dolby Atmos, and Dolby Digital.

LG’s C series OLED TVs are more premium versions of the B variants, however, they use the same panel, so the image quality and performance will be largely similar.

The main difference lies in the slightly different design. The C1 also has four HDMI 2.1 ports, instead of only two, and it’s available as a 48″, 65″ and 83″ variant.

Depending on pricing and availability, the CX version is also worth considering; the C1 model has a slightly faster processor, but this doesn’t affect console/PC gaming performance.

The LG G1 model uses a newer panel that gets slightly brighter (by up to ~100-nits) and has the unique ‘gallery’ design, but it’s significantly more expensive.

These are the best TVs for PS5 and Xbox Series X or Xbox Series S we recommend! Not sure which one to get? Feel free to leave us a comment below!

Overall, if you’re on a limited budget, you can’t go wrong with the TCL S535, but we recommend saving up for the TCL R646 as you’ll get a significantly better image quality and smoother performance.

To take your gaming and viewing experience to the next level, go with LG’s BX or C1 OLED TV. In case you can’t afford them or you’re too worried about burn-in, Samsung’s QN90A TVs are excellent LED-backlit alternatives.