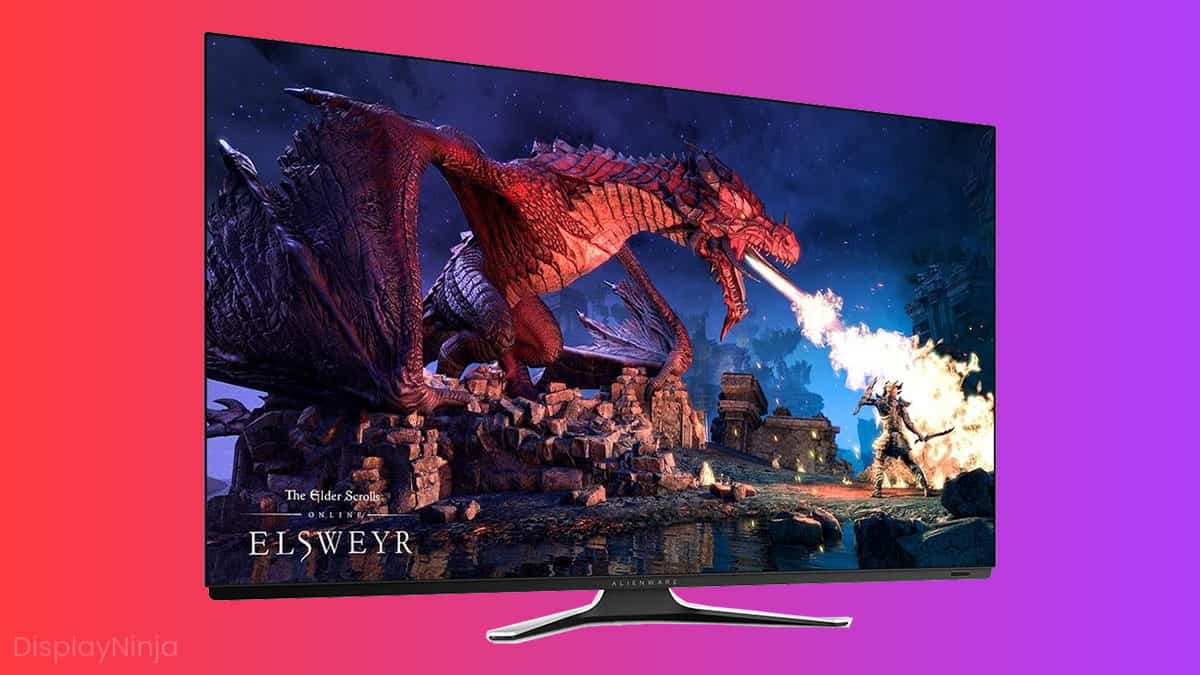 OLED displays don’t rely on a backlight to produce an image, which allows them to generate true blacks for a basically infinite contrast ratio.

Moreover, they have an instantaneous pixel response time speed for minimal motion blur in fast-paced games.

There are already numerous OLED TVs available that take full advantage of the points mentioned above, but what about OLED monitors?

In this article, we’ll keep you posted about everything related to OLED monitors, including potential release dates or any market status updates.

Click on the monitor in the table above to jump to the section of the article that contains more information about it.

If you’re looking for an OLED monitor for gaming, the Dell Alienware AW3423DW is currently the best model available, followed by the Gigabyte Aorus FO48U which is essentially the LG CX/C1 TV, but without the integrated smart TV features. 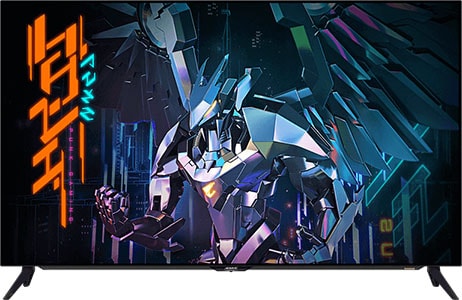 The Gigabyte Aorus FO48U was one of the first viable (in terms of being reasonably priced and not drastically flawed) OLED gaming monitors available.

So, you’re getting the same image quality and performance with an addition of a DisplayPort input, but without the TV tuner and smart OS – for around the same price.

4K UHD resolution looks sharp even on a 48″ sized screen! You get roughly 92 pixels per inch, which is equivalent to the pixel density of a 24″ 1080p monitor. So, at a regular viewing distance (~ 4ft or 120cm), you won’t be able to distinguish individual pixels.

The monitor also has a decent peak brightness of ~800-nits for HDR content, while the brightness under SDR amounts to 150-nits typical and 400-nits peak.

10-bit color depth is supported without dithering and you get a wide 98% DCI-P3 color space coverage. An sRGB mode is also provided for an accurate representation of sRGB content.

All in all, you get an incredible image quality with true blacks, vivid colors and crisp details.

While the FO48U doesn’t get as bright as some high-end LED-backlit screens, its decent peak brightness, infinite contrast ratio and lack of backlight bleed more than make up for it and offer an overall more immersive viewing experience, especially in dark rooms.

The main issue of the monitor, besides potential burn-in, is the automatic brightness limiter (ABL). Depending on the content on-screen, ABL will dynamically change the monitor’s brightness in order to preserve its lifespan.

On LG’s TVs, there is a workaround for this issue as adjusting the TV’s contrast or brightness setting can disable ABL; but, so far, it seems that there’s no way to do this on the Gigabyte FO48U.

While the risk of burn-in and sometimes annoying ABL behavior can take away from the otherwise amazing image quality of OLED, the display’s performance is uncompromising.

To start with, you get imperceptibly low input lag, so there’s no delay between your actions and the result on the screen.

Further, the pixel response time speed is faster than that of any LED monitor; it’s instantaneous, making for a ghosting-free gaming experience.

Next, the monitor features variable refresh rate (VRR) with FreeSync Premium and HDMI 2.1 Forum VRR support for tear-free gameplay up to 120FPS with a 40-120Hz range. It’s not officially certified as ‘G-SYNC Compatible’ by NVIDIA, but VRR works with compatible GeForce cards without issues.

The stand of the monitor is sturdy, but lacks ergonomic adjustments. You can, however, mount the screen via the 300x300mm VESA pattern.

Another thing that makes the Gigabyte FO48U different than most monitors is that it, like all OLED screens, has an anti-reflective glossy screen surface that allows for more vivid image quality, though not as effective glare mitigation as matte coatings.

Connectivity options include DisplayPort 1.4 with DSC, two HDMI 2.1 inputs, a headphone jack, an audio line-out port, a dual-USB 3.0 hub, and a USB-C port with DP 1.4 Alt Mode and 18W PD.

As they use the same OLED panel, LG’s 48″ CX and C1 TVs are also worth considering. You may even be able to find them at a bit lower price.

Other monitors based on the same panel include:

While the TV features a faster processor than the CX series, it lacks 120Hz BFI support and it’s currently more expensive.

You can check out our full LG OLED42C2 review for more information.

ASUS is the first to announce a 42″ OLED monitor based on the same panel as the C2 – the ASUS ROG Swift PG42UQ. 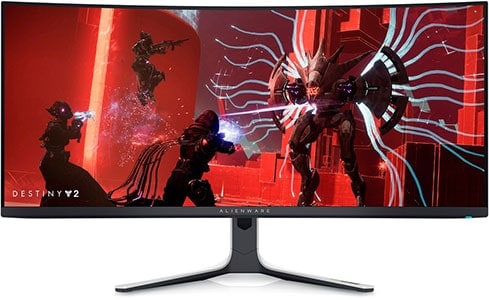 The Dell Alienware AW3423DW is based on Samsung’s OLED panel that’s enhanced with quantum dots (QD-OLED), which improves upon various aspects of LG’s OLED.

So, you get more vibrant and saturated colors! You’ll also find dedicated sRGB and DCI-P3 color modes with adjustable brightness and gamma.

The overall perceived brightness is also higher due to more saturated colors.

Just like every OLED, the AW3423DW has an infinite contrast ratio, instantaneous response time speed and wide viewing angles with consistent colors.

Another advantage of QD-OLED technology is better burn-in resistance; Dell even offers a three-year warranty that covers burn-in.

So, you’ll get more screen space and sharper details, as well as an extended horizontal field of view due to the ultrawide resolution. Unlike LG’s OLED panels that use WRGB subpixel layout, QD-OLEDs have regular RGB subpixels, but in a triangular layout, so there’s still some minor fringing on small text that can be alleviated via ClearType.

Moving on, the Dell AW3423DW has a high 175Hz refresh rate and a dedicated G-SYNC module that provides flawless VRR performance up to 175FPS. Sadly, it doesn’t support backlight strobing.

You can learn more about the monitor in our full review.

Samsung and MSI announced their models based on the same panel, the Samsung Odyssey G8QNB and the MSI MEG 342C; however, there’s no word on pricing and availability. Unlike the AW3423DW, these two monitors won’t feature a dedicated G-SYNC module, but rely on Adaptive-Sync for variable refresh rate via FreeSync Premium and G-SYNC Compatible.

Looking for an OLED monitor for professional color-critical work? Here, you will find the best models available (and announced). 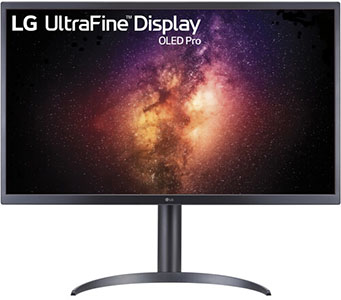 For most users, 48″ and even 42″ sized 16:9 displays are too big for regular desktop use, so they have to wait for smaller OLED monitors.

The LG 32EP950 and 27EP950 are the first OLED displays available in the more common desktop monitor form factor, but they’re aimed at professionals.

Both the 32EP950 and 27EP950 offer the same key specifications, performance and features – the main difference between them is in screen size and, therefore, pixel density or PPI (pixels per inch).

Their main feature, besides the infinite contrast ratio, is the exceptional 99% Adobe RGB and DCI-P3 color gamut combined with professional-grade factory calibration, making them ideal for professional work involving all common color spaces.

The peak brightness amounts to 250-nits for SDR content, and ~540-nits for HDR; true 10-bit color depth is supported as well.

Still, due to their excellent image quality, low input lag and instantaneous response time speed, games look and run great. However, variable refresh rate is not supported, so you’ll have to resort to V-Sync in order to prevent tearing.

Another thing worth mentioning is that the ABL implementation is a lot less aggressive on the LG 27/32EP950 than that of the Gigabyte FO48U or the CX/C1. So, during normal use, changes in picture brightness won’t be noticeable.

The stand of the monitor is robust and versatile with up to 130mm height adjustment, 90° pivot, tilt and 100x100mm VESA mount compatibility, but not swivel option.

The Philips 27E1N8900 is another 27″ 4K 60Hz monitor based on a slightly different and cheaper (~$1100, no word on release date) JOLED panel (EPM269Q014A). Unlike LG’s model, it doesn’t support hardware calibration. Other specifications are basically identical, so we’ll have to wait for reviews for a proper comparison between the two panels.

Additionally, ASUS has a model in the works based on the same panel as the 32EP950/32BP95E with an integrated calibrator as well, the ASUS ProArt PA32DC.

LG mentioned that high refresh rate OLED monitors are on the horizon, but there’s no word on anything specific, including release date or pricing.

Moreover, AU Optronics plans to develop 32″ 4K 144Hz and 32″ 8K 120Hz OLED panels, but again, there’s no other information available than that.

If you’re not interested in any of the above-mentioned OLED displays, here you’ll find all the information about all other OLED monitors and announced panels. However, most of them are discontinued, overpriced, or have very little information available.

However, we don’t recommend these models as they’re terribly overpriced (~$3,000) and don’t even support HDR. You can get a 55″ OLED TV at half the price with better image quality and just as good performance.

Sadly, we don’t have any other information about it, but we’ll update the article as soon as something comes up.

Back in 2018, JOLED showcased a 21.6″ 1080p 144Hz OLED gaming display called the Burning Core, after the eSports team that helped develop the monitor.

At that time, they also mentioned that a 27″ 4K 60Hz OLED model is in the works, but there haven’t been any updates regarding neither monitor since.

Another monitor worth mentioning is the discontinued Dell UP3017Q with a 30″ 4K 60Hz OLED panel, which was the very first OLED monitor available.

If you need a good portable monitor, you’re in luck. Most OLED monitors available today are, in fact, portable. So, you’ll at least have a somewhat decent selection in this category. 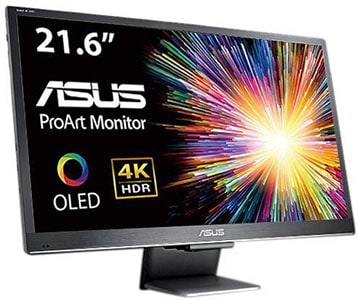 The ASUS ProArt PQ22UC was the second OLED monitor to be announced. It’s based on a JOLED panel by Sony and Panasonic.

4K UHD resolution on such a small display provides you with an incredible pixel density of 204 PPI (pixels per inch), which guarantees stunning detail clarity.

It comes with a foldable stand for desktop use, as well as a magnetic smart cover for easy transport. Connectivity options include two USB-C ports and mini-HDMI.

The main drawback of the PQ22UC is the $4,000 price tag. There’s one more 22″ 4K OLED monitor called the Eizo Foris Nova. However, there were only 500 units made and it’s sold out now. 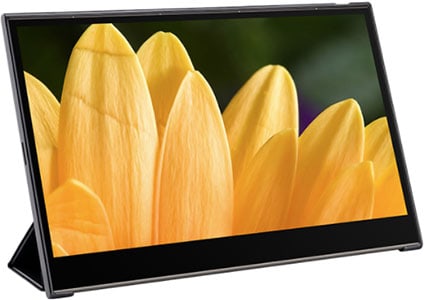 If you’re looking for a more affordable portable OLED monitor, you should check out the Innocn PU15-PRE.

In comparison to the ASUS PQ22UC, the PU15-PRE is based on a smaller 15.6″ screen, which results in an even higher pixel density of 282 PPI! So, the screen is smaller, but the details are sharper. It also has a higher 400-nit peak brightness.

The monitor has a wide color gamut with 100% DCI-P3 and ~99% Adobe RGB coverage. It’s factory-calibrated, so it’s ready for professional color-critical work right out of the box.

The monitor comes with both a magnetic cover and a foldable stand, and it supports touch-screen (10-point touch). 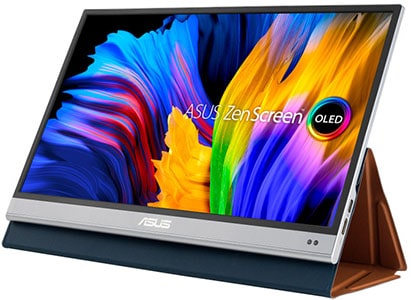 ASUS announced two portable OLED monitors with 1080p resolution, which should make them more affordable than the 4K models.

The ZenScreen OLED portable displays feature a smart magnetic case and a tripod socket, while connectivity options include three USB-C ports and mini-HDMI.

No word on pricing and availability yet though.

That’s all the information regarding OLED monitors we have so far.

If something new comes up, we’ll update the article first thing, so feel free to visit us again, and hopefully, you’ll find more OLED monitors!