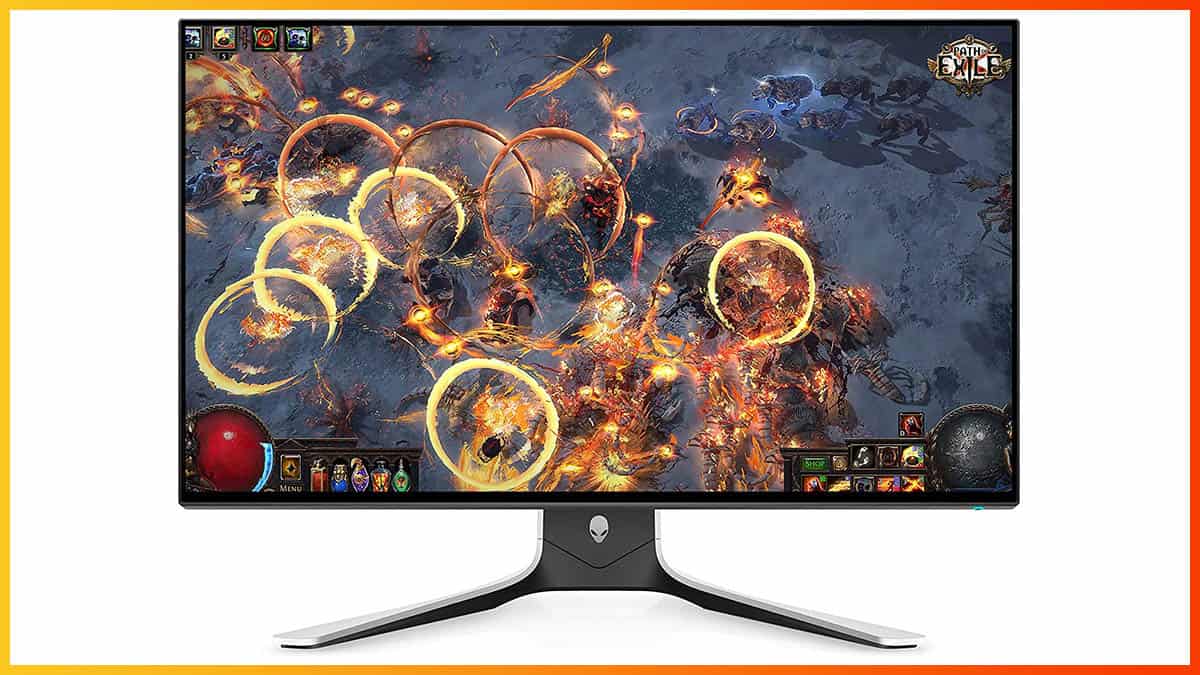 You get a notable jump in motion clarity and HDR image quality. Plenty of other features are available too, including premium design quality and rich connectivity options, but there are some downsides as well.

For many gamers, 27″ 1440p IPS monitors with a high refresh rate are the perfect displays.

The screen is neither too small nor too big, the resolution looks crisp without being too demanding on your setup and the IPS technology offers the most vibrant and consistent colors as well as wide viewing angles and quick response time.

But it gets better: add to that as high a refresh rate as possible and as many useful features as you can, and you’re getting closer and closer to the perfect gaming machine.

The Dell Alienware AW2721D also brings us 240Hz for a notable kick in motion clarity from the previous 144Hz standard — plus DisplayHDR 600 support, as opposed to the mostly meaningless DisplayHDR 400 certification.

Now, the monitor is based on LG’s Nano IPS panel with a wide 98% DCI-P3 color gamut (equivalent to ~135% sRGB). As a result, you get absolutely gorgeous colors, especially reds and greens, for a more lifelike picture quality.

Sadly, as there’s no sRGB color clamp, regular sRGB content will be over-saturated. Some users prefer this as it can make the image more vibrant, but the colors in sRGB games and content won’t look the way their creators intended.

On the other hand, content that uses the DCI-P3 gamut natively (HDR) will look just right with better shade variety and no over-saturation.

Related:What Is HDR For Monitors And Is It Worth It?

On the 27″ viewable screen of the Dell AW2721D monitor, the 2560×1440 Quad HD resolution results in plenty of screen real estate and crisp details without any scaling necessary thanks to the high 109 PPI (pixel per inch) ratio.

Next, the monitor has a peak brightness of 450-nits with a boost to 600-nits available for HDR content. Overall, the screen can get very bright, which makes for vivid and punchy highlights.

On top of that, the IPS technology boasts 178° wide viewing angles, so that the image won’t shift in color, contrast, or brightness regardless of the angle you’re looking at the screen. Alas, the static contrast ratio amounts to 1,000:1, which is standard for IPS panel monitors, but it means that blacks won’t be particularly deep.

There are 32 dimming zones capable of pushing the contrast ratio a bit by dimming parts of the image that need to be dark without affecting the bright areas, but just how effective these zones are will depend on how demanding the scene is.

Regardless, you do get a noteworthy improvement for HDR, it’s just that some scenes and content will look a bit better than others. It’s not the ‘true’ HDR viewing experience, but it’s still great.

Lastly, although Dell and NVIDIA advertise the Alienware AW2721D as ‘G-SYNC Ultimate’, you won’t get the same HDR viewing experience as you’d get with some other monitors carrying this certification, such as the Acer Predator X35 or the ASUS PG27UQ, which have a more expensive full-array local dimming implementations and higher 1000-nit peak brightness.

The Dell AW2721D features a dedicated NVIDIA G-SYNC module, which provides you with a variable refresh rate (VRR) up to 240Hz. The module also requires a cooling fan, but it’s silent.

As if that’s not enough, VRR removes all screen tearing and stuttering without noticeable input lag penalty as long as you have a compatible graphics card and your frame rate doesn’t exceed the monitor’s maximum refresh rate. With this module, you can also use VRR with AMD graphics cards.

Unlike other G-SYNC Ultimate gaming monitors, the Dell AW2721D doesn’t have the ULMB (Ultra Low Motion Blur) backlight strobing technology. Implementing backlight strobing on this monitor would’ve been a waste of time anyway as it would result in prominent red-colored ghosting due to slow red phosphor decay, as it’s the case with all Nano IPS monitors with strobing.

There are three response time overdrive modes: Fast, Super Fast, and Extreme. As usual, the Extreme mode has too much pixel overshoot and should be avoided. The ‘Fast’ mode works great as there’s no visible ghosting nor overshoot.

The ‘Super Fast’ mode pushes the pixels to change a bit faster, but there’s inverse ghosting visible, so you can choose between these two modes according to your personal preference; we recommend sticking with the Fast mode.

But here’s the kicker: thanks to the variable overdrive of the G-SYNC module, the response time performance is consistent across the entire refresh rate range. The input delay is imperceptible at only ~2ms.

Moving on, some IPS glow is visible as expected. Note that the intensity of IPS glow varies across different units of the monitor, just like backlight bleeding, dead pixels, factory calibration, etc.

At the rear of the monitor, there’s a directional joystick for OSD (On-Screen Display) menu navigation, as well as four additional hotkeys, three of which can be assigned to different shortcuts.

Other gaming features include Dark Stabilizer (improves visibility in dark scenes), an on-screen timer and a refresh rate tracker.

While the standard image adjustment tools, such as brightness, contrast, and color temperature are available, there aren’t any gamma presets. You can adjust the local dimming speed (gameplay, hybrid use, desktop use, and off).

Best of all, the backlight of the monitor is flicker-free, which in addition to the low-blue light filter allows you to game for hours without straining your eyes.

There’s also an integrated ambient light sensor, which can adjust the monitor’s brightness according to ambient lighting.

The stand of the monitor is made out of premium materials, it’s sturdy, and offers a wide range of ergonomics including up to 130mm height adjustment, +/- 20° swivel, 90° pivot, -5°/21° tilt and 100x100mm VESA mount compatibility.

There’s a matte anti-glare coating too, which effectively eliminates reflections, while the bezels are ultra-thin at all four sides of the monitor.

Connectivity options are abundant and include two HDMI 2.0 ports (limited to 144Hz), DisplayPort 1.4, a headphone jack, audio line-out and a quad-USB 3.0 hub.

To activate 10-bit color depth at 1440p 240Hz, you will need to change the output color format to YCbCr422 in your graphics card driver settings. Also, note that the monitor can’t accept a 4K signal over HDMI, so you’ll be limited to 1080p on PS4, PS4 Pro, and PS5 consoles.

The G7 can have 2 to 4 times higher contrast and it doesn’t suffer from IPS glow, so it offers a more immersive viewing experience with more vivid and inky blacks, especially in dark rooms.

Further, its DisplayPort input supports DSC 1.2 allowing you to use 10-bit color at 1440p 240Hz with RGB output color format.

On the other hand, the Dell AW2721D offers more vibrant and consistent colors as well as wider viewing angles, whereas the G7 exhibits gamma and saturation shifts that make it unsuitable for serious color-critical work.

When it comes to performance, the monitors are similar as the G7 is certified as G-SYNC Compatible and has a very good overdrive implementation with fast pixel response time speed. Its latest firmware update fixed the notorious brightness flickering issue.

However, the G-SYNC module still makes for more stable VRR performance as the G7 can have some micro-stuttering as a side effect of preventing brightness flickering.

On balance, neither monitor is better. It just depends on your personal preference. The AW2721D offers more consistent colors and performance, whereas the G7 has a more immersive picture quality due to the higher contrast ratio.

Moreover, the steep 1000R screen curvature of the G7 also plays a role here. Some gamers will find it unbearable, while others might absolutely love it; and then, there are those who are indifferent to it.

Another monitor to keep in mind is the 27″ 1440p 240Hz IPS model based on AUO’s IPS panel with a quantum-dot enhanced backlight, the ASUS ROG Strix XG27AQM.

It has an even wider 99% Adobe RGB color gamut (equivalent to ~150% sRGB) for improved shade variety, especially blue, cyan and green colors.

Further, it features a dedicated sRGB mode, which clamps the gamut to ~100% sRGB for accurate sRGB color output.

Next, the ASUS XG27AQM is also factory-overclockable to 270Hz, supports DSC (allowing you to use 10-bit 4:4:4 RGB color all the way up to 270Hz) and offers ELMB-Sync for simultaneous backlight strobing and VRR performance.

The pixel response time and input lag of the XG27AQM and the Dell AW2721D are pretty much the same, but ASUS’ model doesn’t have a dedicated G-SYNC module.

Instead, it uses Adaptive-Sync and supports VRR with both AMD (FreeSync Premium) and NVIDIA (G-SYNC Compatible) cards up to 270FPS without any issues. However, it has inferior HDR image quality due to the lower 400-nit peak brightness and lack of localized dimming (DisplayHDR 400).

Since the HDR image isn’t that spectacular on the AW2721D either, except in certain scenes of some content, we recommend the ASUS XG27AQM over the Dell AW2721D.

So, what’s the bottom line?

Overall, the Dell AW2721D offers smooth performance and an excellent image quality, but there are plenty of things that could be improved, which is a bit disappointing at this price range.