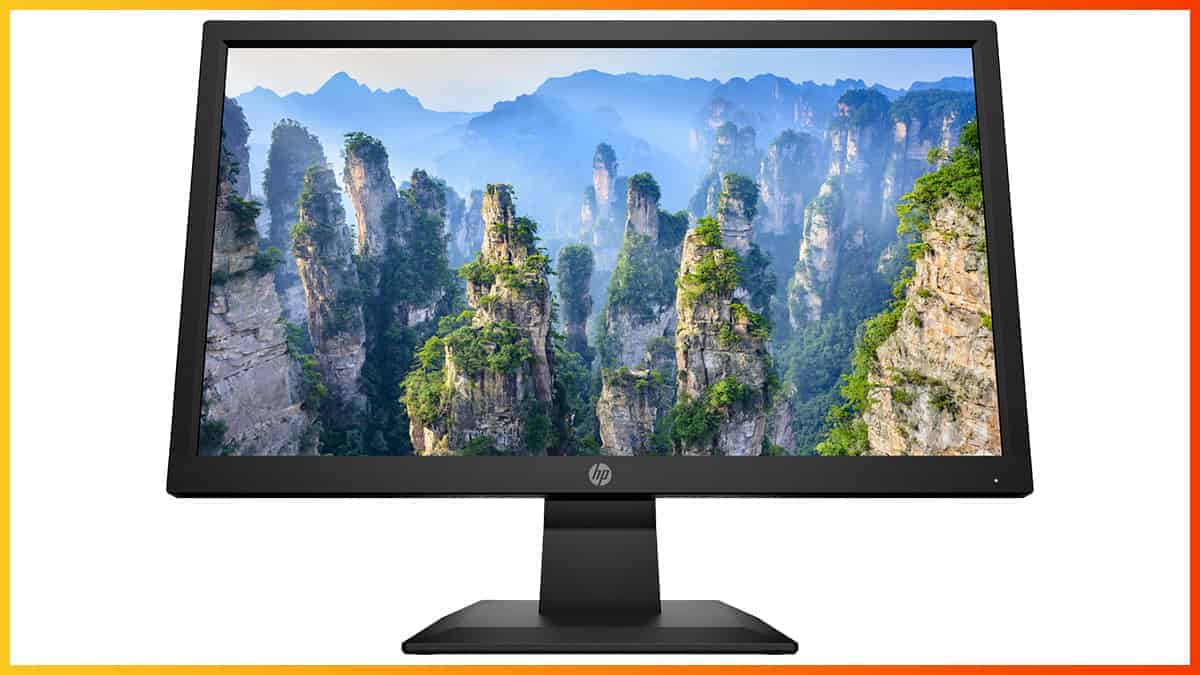 The HP V20 is a decent cheap monitor for a secondary display or similar use. If you’re looking for a new main monitor, we highly recommend investing in something better.

The HP V20 is one of the most popular affordable monitors available, but does that make it a worthy buy? Let’s find out!

First of all, the HP V20 monitor is based on a TN panel (most likely the M195RTN01.1 panel by AU Optronics) with a 200-nit peak brightness and a 600:1 static contrast ratio, which is quite low for a LED-backlit display, even if it’s a budget monitor.

Almost all modern budget displays have at least a 250-nit peak brightness and a contrast ratio closer to 1,000:1.

While 200-nits should be plenty bright under normal lighting conditions, if you have strong ambient lighting in your room, the screen will be too dim as it won’t be able to mitigate glare even at its highest brightness setting.

Further, the 600:1 contrast ratio results in grayish blacks and an overall weak relation between the darkest black and the brightest white.

Another weakness of TN technology is the narrow viewing angles of 160° vertically and 170° horizontally, which cause the image to shift in brightness, contrast, color and gamma when viewed at skewed angles.

The TN panel of the HP V20 has even narrower viewing angles of 65° vertically and 90° horizontally, so unless you’re looking at the screen straight on, there will be noticeable degradation in picture quality.

Moving on, the monitor supports 8-bit color depth for 16.7 million colors, which is standard, and has a 72% NTSC color gamut coverage. This is equivalent to around 95% gamut coverage of the common sRGB color space (give or take 2-3% depending on the unit).

So, while the colors are overall decent, they are diminished by the low contrast ratio, low brightness and narrow viewing angles.

Yet another subpar feature of the monitor is the 1600×900 HD+ screen resolution.

An upside to this is that HD+ resolution is not very demanding to drive in case you have a weaker PC system. Further, it results in a respectable pixel density of 94 PPI (pixels per inch) on the 19.5″ viewable screen of the HP V20, providing you with a decent amount of screen space and fairly sharp details and text.

The monitor has a maximum refresh rate of 60Hz, which won’t appeal to gamers.

If you play a lot of games and can maintain a decent frame rate, we highly recommend investing in a high refresh rate gaming display. Even 75Hz offers a small but noticeable boost in motion clarity.

The good news is that the HP V20 has a fast pixel response time speed of 5ms (GtG), so there won’t be any prominent trailing artifacts behind fast-moving objects.

Moreover, input lag amounts to around 11ms, which makes for imperceptible delay between your actions and the result on the screen.

At the rear of the monitor, there’s a power button and four hotkeys for navigation through the OSD (On-Screen Display) menu.

There’s a built-in low blue light filter with three modes (the certified ‘Low Blue Light’ mode, ‘Night’ and ‘Reading’), while the backlight of the monitor is completely flicker-free.

The design of the monitor involves rather think bezels, while the stand is sturdy and offers tilt adjustment by -5°/25°. The screen is VESA mount compatible (100x100mm) and has an anti-glare coating against reflections.

Connectivity options include one VGA port and one HDMI 1.4 port.

At $80, it’s the cheapest monitor you can buy right now, so it’s worth getting at that price if you have a limited budget, you’re familiar with all its downsides, and mainly need it as a secondary display.

If you’re in the market for your main display, we highly recommend the Acer SB220Q. This 22″ monitor offers a higher resolution, a larger screen with a higher pixel density, higher contrast ratio and brightness, wider viewing angles, more vibrant colors, a modern slim design and FreeSync up to 75Hz for smoother gameplay – all that for $130.

In fact, the Acer SB220Q used to go for ~$90 before the component shortage, which is why the HP V20 is not such a great deal even at $80, as the prices are slowly normalizing.

At around $130, there are also a few more displays to consider, so be sure to check out our best monitors under $150 buyer’s guide.

All in all, the HP V20 is an okay cheap monitor for a secondary display or similar use. However, for your main monitor, you should invest in something a bit better as even around $15 to $50 extra allows you to buy a significantly better display.