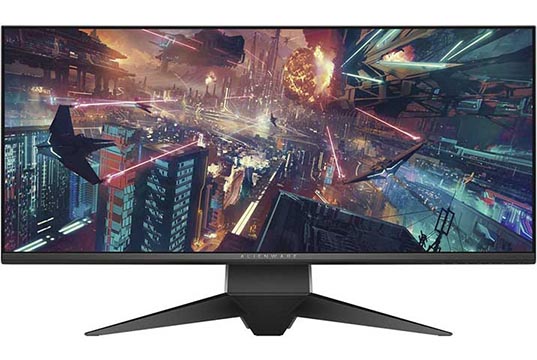 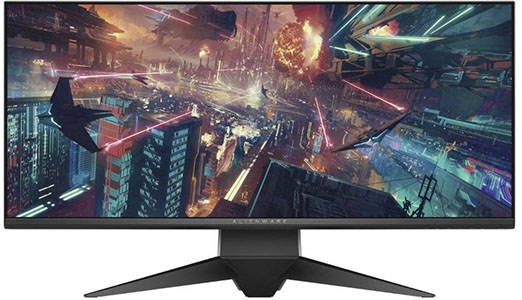 Are you looking for the ultimate ultrawide gaming monitor? Well, the Dell Alienware AW3418DW ticks nearly all the boxes and delivers both immersive and responsive gaming experience.

It features a giant 34″ curved screen with vibrant colors and high resolution for a stunning image quality and a 120Hz refresh rate, low input lag, quick response time, and NVIDIA G-SYNC for a flawless performance.

Now, these specs are a bit weaker than those of entry-level HDR displays, which sport at least a 400-nit peak brightness and 90% DCI-P3 color gamut, but the picture quality of the AW3418DW is vibrant and crisp nonetheless.

Other panel-related specs including wide 178-degree viewing angles, true 8-bit color depth, and the 3440×1440 UWQHD resolution, which provides a high pixel density of 109 pixels per inch.

While IPS monitors can be used for professional editing, keep in mind that the Dell Alienware AW3418DW monitor is not factory-calibrated and lacks gamma settings, so you will need a calibration device for the optimal image quality.

First off, the Dell Alienware AW3418DW input lag performance is top-notch and amounts to only ~4ms.

Next, the 4ms response time speed removes most of the ghosting and motion blur of fast-moving objects with only slight artifacts visible; the higher the frame rate, the less ghosting there is.

There is far less ghosting than on the ultrawide VA-panel counterparts. Even though VA monitors have deeper blacks due to the higher contrast, the better response time of IPS monitors makes for a significantly more enjoyable fast-paced gameplay.

In the On-Screen Display menu, you will find the Response Time setting with three options: Normal, Fast, and Super Fast. We discovered that ‘Normal’ works best as ‘Fast’ and ‘Super Fast’ introduce overshoot or reverse ghosting.

The IPS glow and backlight bleeding is minimal and only visible in extreme scenarios. There are also no dead pixels nor any similar defects. Further, the screen is flicker-free and has a filter for the harmful low blue lights.

Lastly, the 21:9 aspect ratio provides you with a wider field of view for a more engaging gaming experience – given that the game supports the ultrawide resolution. You can check all games that support 21:9 here. 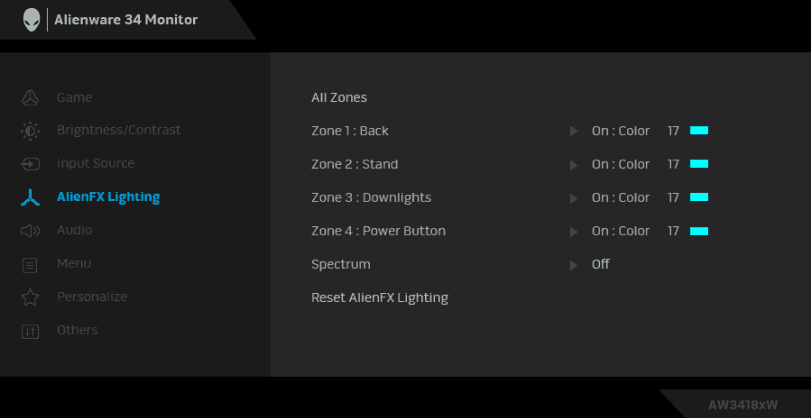 To overclock the display, you simply go in the OSD menu and set the Overclock setting to 105Hz, 110Hz, 115Hz, or 120Hz. Even at 110Hz, you will be able to notice a slight increase in responsiveness and faster pixel transition.

The OSD menu is navigated by four buttons placed beneath the bottom bezel. While not on the menu, these buttons can be used as hotkeys for shortcuts, which you can customize and assign in the OSD’s ‘Personalize’ settings.

Standard adjustments such as brightness, contrast, and color temperature are available, but as already mentioned, there are no gamma settings.

The Dell Alienware AW3418DW also boasts the AlienFX RGB lighting technology with four individually adjustable zones, including at the back of the monitor, at the stand, at the bottom bezel, and the power button.

Finally, the monitor supports NVIDIA G-SYNC technology which, when connected to a compatible NVIDIA card, allows the display to change its refresh rate according to the GPU.

The result is a variable refresh rate which eliminates all screen tearing and stuttering without adding input lag. The dynamic refresh rate range is 30Hz-100Hz or 30Hz-120Hz if you overclock the monitor.

It’s also important to note that the Dell Alienware AW3418DW does not have the NVIDIA ULMB (Ultra Low Motion Blur) backlight strobing technology, which is often paired with NVIDIA G-SYNC. 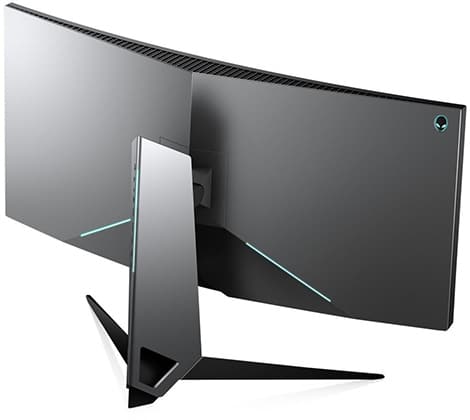 The Dell Alienware AW3418DW design has a somewhat sci-fi high-tech vibe to it, which may not appeal to everybody, but more importantly, the monitor is sturdy with a metal stand and matte chassis.

Next, the monitor has ultra-thin bezels at the top and at the sides, which in addition to the 1900R curvature, provides a cinematic viewing experience. You can tilt, swivel, and elevate the screen up to 130mm or VESA mount using the 100 x 100mm pattern.

Connectivity consists of a single HDMI 1.4 port and one DisplayPort 1.2 port. Only the DP port supports 3440×1440 up to 120Hz and G-SYNC. Other ports include an audio line-out, a headphones jack, and a quad-USB 3.0 hub (one port with fast charging).

Dell also offers a similar 34″ ultrawide model, with a higher refresh rate up to 160Hz but a lower 2560×1080 screen resolution, dubbed as the Dell Alienware AW3418HW. It has G-SYNC as well, but a similar price tag due to the lower resolution.

You should also check out the Acer Predator X34P, which is based on the same panel as the Dell AW3418DW. It offers nearly identical image quality, performance, and features for roughly the same price. Still, Dell’s model has proven to have better quality control as Acer’s X34P is more prone to excessive IPS glow and G-SYNC/overclock scanlines.

Having said all that, we highly recommend saving up for the LG 34GK950F, which is also a 34″ 3440×1440 IPS ultrawide curved gaming monitor, but with a native 144Hz refresh rate and entry-level HDR.

All in all, the Dell Alienware AW3418DW is one of the rare 34″ 3440×1440 100Hz models with an IPS panel, which might not have as deep blacks as the VA-panel variants but it handles motion notably better.

In addition to its 120Hz overclockable refresh rate, NVIDIA G-SYNC, and the plethora of gaming features, it provides an immaculate performance while the large curved screen with outstanding colors ensures an immersive viewing experience.