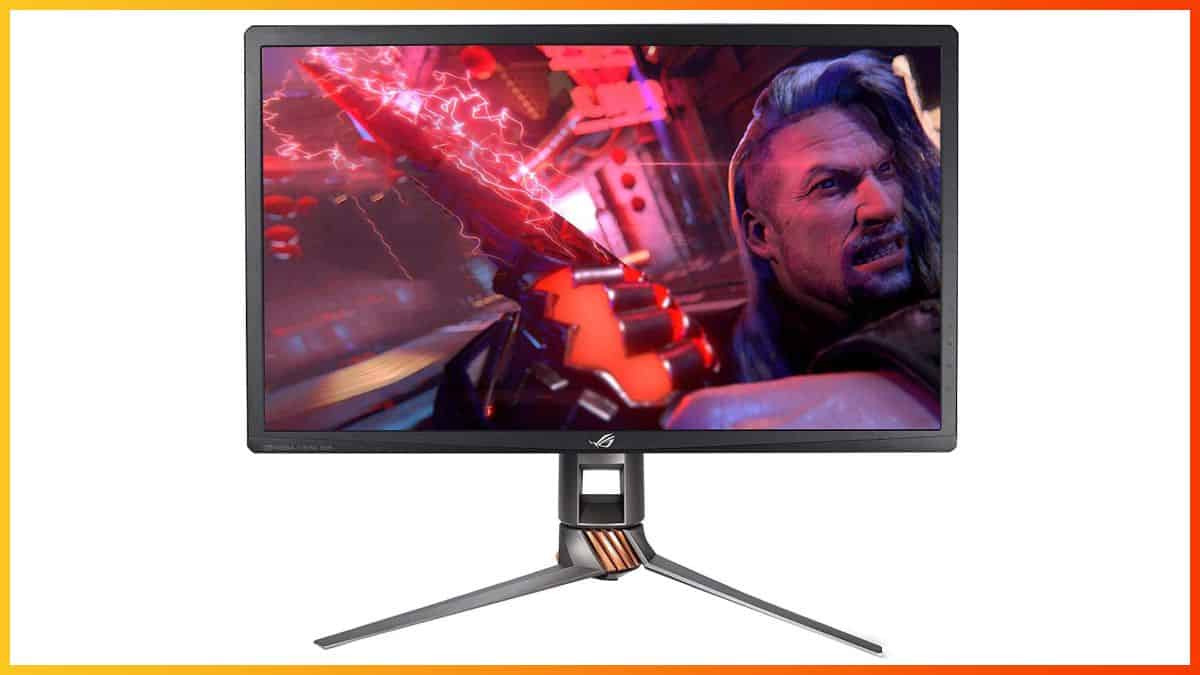 The ASUS ROG Swift PG27UQ delivers an excellent HDR image quality and smooth performance. Moreover, it features a premium design quality and a selection of gaming features. Its MSRP price, however, is not as attractive.

Back in 2018, the ASUS PG27UQ, along with the Acer X27, was one of the first gaming monitors with a full-array local dimming (FALD) implementation, which allowed it to deliver a true HDR viewing experience.

Most gamers, however, were dissuaded by the $2,000 price tag.

Nowadays, both displays can sometimes be found on sale for as low as $1,300, but there are a lot of brand new monitors available at that price range too. So, how does the ASUS PG27UQ stack up now? Let’s find out!

It’s factory-calibrated to Delta E ≤  3 and covers 97% of the DCI-P3 color space and 99% Adobe RGB making it fit for professional color-critical work.

So, if you’ve been after a monitor that excels at both gaming and professional use, you might’ve found your holy grail.

Moving on, the ASUS PG27UQ supports HDR (High Dynamic Range) with a contrast ratio of 50,000:1 and a peak luminance of 1,000-nits, resulting in vivid highlights and inky blacks.

In order to deliver such exceptional image quality, the monitor uses a full-array local dimming solution with 384 individual zones that help dim the backlight where it’s needed without affecting parts of the screen that need to be bright.

However, in some cases where a lit zone is surrounded by dimmed zones (for instance, moving your cursor across a black background), the light of the lit area will bleed into the dimmed zones creating a halo/bloom effect.

So, in some specific scenarios, it’s preferred to disable local dimming.

Finally, 4K Ultra HD resolution ensures that there is plenty of details and screen real estate as such high resolution on a 27″ monitor results in a rich pixel density of 163 PPI (pixels per inch).

The ASUS ROG Swift PG27UQ claims to support 4K at 144Hz and HDR.

But there’s a catch.

What you won’t find on the product page or written on the box is that the ASUS PG27UQ, due to the DisplayPort 1.4 bandwidth limitations, can only do one of the following three things:

Dropping the color depth to 8-bit isn’t really a big deal. The difference between 8-bit and 10-bit color depth is basically unnoticeable in video games. In fact, most games support only 8-bit color.

Chroma subsampling, on the other hand, makes text appear smudgy and fringy, which becomes an issue for desktop use and video games with a lot of text.

Since 4K UHD resolution is quite demanding as it is, we don’t recommend using chroma subsampling as you’ll hardly get 144FPS at 4K anyway. So, you should stick to 4K 120Hz and 8-bit color depth.

Next, the ASUS PG27UQ input lag is only 5ms at 120Hz, which makes for imperceptible delay, while the response time speed of 4ms effectively removes most trailing artifacts behind fast-moving objects. It’s not as fast as modern IPS panels, so some minor ghosting is still noticeable, but it’s tolerable.

In addition, the monitor is flicker-free and has a low blue light filter, so you can game for hours on end without straining your eyes.

Another feature of the ASUS ROG PG27UQ is that it can emit the ‘Republic Of Gamers’ logo as well as customizable lighting onto your desk and/or wall.

ASUS Aura Sync RGB allows you to synchronize the monitor’s RGB lighting with other Aura Sync compatible peripherals and use various glowing patterns and color combinations.

There’s also a light sensor that can automatically adjust screen brightness according to the ambient lighting.

Fans of backlight strobing will be disappointed to find out that the ASUS PG27UQ does not feature NVIDIA ULMB (Ultra Low Motion Blur) or any other form of Motion Blur Reduction. Luckily, there isn’t any prominent ghosting or motion blur in fast-paced games as the pixel response time speed of the monitor is very good.

The appearance of the monitor may seem too flashy to some, even when the RGB LEDs and projectors are turned off, but the design itself is very sturdy with versatile ergonomics including -/+ 35° swivel, 90° pivot, up to 120mm height adjustment, -5°/20° tilt, and 100 x 100mm VESA mount compatibility.

The matte black bezels are a bit thicker due to the FALD implementation, but they look rather nice regardless. For navigation through the OSD (On-Screen Display) menu, there’s a joystick as well as three buttons for shortcuts at the back of the monitor.

Lastly, the screen has an anti-glare matte coating, which eliminates reflections, and there’s a relatively silent integrated fan that keeps the display cool.

Acer has their own model based on the same panel as the PG27UQ called the Acer Predator X27 which goes for around the same price.

Its design, however, lacks pivot adjustment and has less customizable RGB lighting, though it does have built-in speakers and two extra USB 3.0 ports.

We recommend considering the Dell AW3423DWF instead. It goes for $1,100 yet offers a much better HDR image quality thanks to its QD-OLED panel with infinite contrast ratio, as well as smoother performance with instantaneous response time.

Another HDR monitor worth considering is the Samsung Neo G7 with an 1196-zone mini LED FALD backlight. It goes for $1,100 but has a steep 1000R screen curvature that won’t appeal to all users.

Now, if you just want a 4K 144Hz gaming monitor and don’t care much about HDR image quality, you can get the Acer XB283K for ~$600. It even has a faster response time speed and HDMI 2.1 support, allowing you to utilize 4K 120Hz on compatible consoles, however, its HDR image quality is not nearly as good.

While the ASUS PG27UQ offers excellent HDR image quality and performance, there are better alternatives available at this price range.