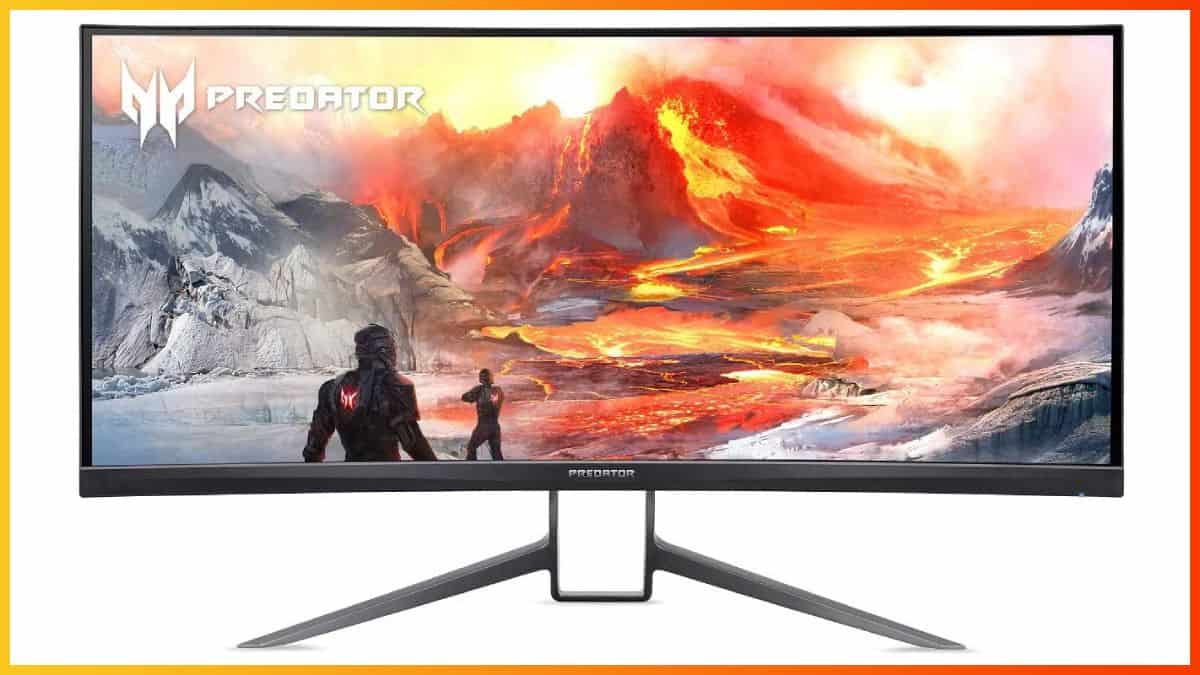 The Acer Predator X35 was one of the first ultrawide monitors to offer a true HDR viewing experience. Nowadays, there are equally priced monitors that offer better HDR picture quality, as well as smoother performance.

The Acer Predator X35, along with its counterpart by ASUS, was one of the most anticipated gaming monitors due to its combination of 512-zone full-array local dimming solution for exceptional HDR viewing experience and NVIDIA G-SYNC up to 200Hz for buttery-smooth performance.

Does it live up to the hype, and is it worth the gigantic price? Let’s see!

We’ll also compare it to the ASUS ROG Swift PG35VQ, which uses the same panel and offers similar features.

The Acer X35 monitor is based on a 35″ AMVA (Advanced Multi-domain Vertical Alignment) panel by AU Optronics with 3440×1440 UWQHD resolution, a 200Hz refresh rate, and dithered 10-bit color depth support.

It utilizes a QDEF (quantum-dot enhanced film) layer, which allows it to extend its color gamut to 90% DCI-P3 for more lifelike and vibrant colors.

You’ll also find the sRGB mode, which restricts the color output to ~100% sRGB in case you want a more accurate color representation of sRGB content.

Further, it has a peak brightness of 600-nits, which gets a boost to ~1000-nits for HDR compatible content, thus earning VESA’s DisplayHDR 1000 certification.

Now, the native contrast ratio of the Acer Predator X35 display amounts to 2,500:1, which already provides deeper blacks and brighter whites in comparison to IPS monitors, which usually have a contrast ratio of 1,000:1.

However, the monitor has a 512-zone full-array local dimming (FALD) implementation, which pushes the contrast ratio even further by dimming parts of the picture that need to be dark without affecting parts that need to stay bright.

This effectively increases the contrast ratio to ~7,500:1 for SDR content and to over 100,000:1 for HDR content. As a result, you get incredibly vivid details in the highlights and shadows of the picture.

Alas, since the monitor has almost 5 million pixels and only 512 dimming zones, there will be some halo and blooming effects visible in certain scenarios.

For instance, if you’re moving a white cursor across a dark background, there’ll be a noticeable halo effect around the cursor as there aren’t enough dimming zones.

This isn’t really noticeable in video games and movies – if it is, it is negligible as it doesn’t occur often, so you can just disable local dimming for regular desktop use if you find the blooming and haloing too distractive.

Generally, you get an immersive picture quality with vibrant colors and vivid details. The ultrawide format further increases the immersion by extending your field of view in compatible games.

You get a pixel density of ~106 PPI (pixels per inch), meaning that you get plenty of screen space as well as sharp and clear details without any scaling necessary.

Content that doesn’t support the 21:9 aspect ratio will be displayed with black bars at the sides. Alternatively, you can stretch or zoom the picture to fill the screen.

So, make sure to check out how your favorite games, movies, apps, and streaming services handle ultrawide resolutions for the optimal viewing experience.

Now that we’ve established that the picture quality of the Acer Predator X35 is as good as it gets when it comes to HDR picture on LED-backlit monitors let’s see how well it performs.

With just below 5ms of input lag, the monitor has no perceptible delays whatsoever; the time the display takes to react and display your commands is basically instantaneous.

There are three response time overdrive options: Off, Normal and Extreme.

We recommend using the Normal mode as it doesn’t introduce as much overshoot as ‘Extreme’ yet it is more effective at eliminating ghosting and motion blur. Sadly, there is noticeable dark level smearing in dark scenes due to the slow dark to bright pixel transitions.

If you are sensitive to smearing, you should definitely consider another monitor at this price range.

The response time behaves a bit differently when local dimming is enabled in which case the Extreme mode actually works better. There are also three different backlight response modes: Desktop, Gaming and Hybrid.

We recommend using the Gaming mode here (even for desktop use) as it has the least amount of trailing and no other disadvantages.

Moving on, the Acer Predator X35 gaming monitor features a dedicated G-SYNC module, which provides a variable refresh rate up to 200Hz for tear-free gameplay without any stuttering or perceptible input lag added.

Keep in mind that G-SYNC doesn’t work with AMD cards on this monitor.

Due to the bandwidth limitations of DisplayPort 1.4, there’s a catch when setting the monitor to 200Hz.

Since most games support only 8-bit color and the difference between 8-bit and 10-bit color isn’t all that obvious in games, you’ll probably find 3440×1440 200Hz with 8-bit full color to work best.

Another thing to keep in mind about VA panel displays is the viewing angles. While they are advertised as 178°, they’re not quite as wide as that of IPS panel monitors.

Further, the colors aren’t as consistent as that of IPS panels.

Some gamma/saturation shifts are noticeable when it comes to color-critical use, but it’s not an issue for everyday entertainment use.

If you just do basic content creation that doesn’t require professional-grade color accuracy, the Acer X35 will do fine.

Navigation through the OSD (On-Screen Display) menu of the Acer Predator X35 200Hz gaming monitor is quick and easy thanks to the user-friendly layout and the 5-way joystick placed at the back of the monitor, at the right side.

In addition to the joystick, you’ll find a power button and three hotkeys for shortcuts, one of which is input source selection, and the other two can be customized.

Note that the first batch of the Acer X35 monitors had flickering issues that can now be solved via a firmware update, which you can get here. The same problem affected the ASUS PG35VQ models, which can be fixed via this firmware.

Moving on, the Acer Predator X35 has a flicker-free backlight and an integrated low-blue light filter. These two technologies ensure a comfortable viewing experience without eye strain or headaches after prolonged use.

The monitor features premium design quality with a metal stand and a wide range of ergonomics, including up to 130mm height adjustment, +/- 30° swivel, -5°/25° tilt, and 100x100mm VESA mount compatibility.

The screen has an anti-glare matte coating, which effectively eliminates reflections and a 1800R curvature, which further improves the immersion. You also get RGB lighting at the back of the monitor.

The Acer X35 also has a cooling fan, which would get pretty loud on earlier units, but the newer models (or with newer firmware) have fixed this issue.

For a much lower price of $1,300, you can get the Dell Alienware AW3423DW instead. It uses a QD-OLED panel for a much better HDR image quality and smoother performance.

While the Acer Predator X35 was an exciting monitor back when it was released, there are much better alternatives available today.