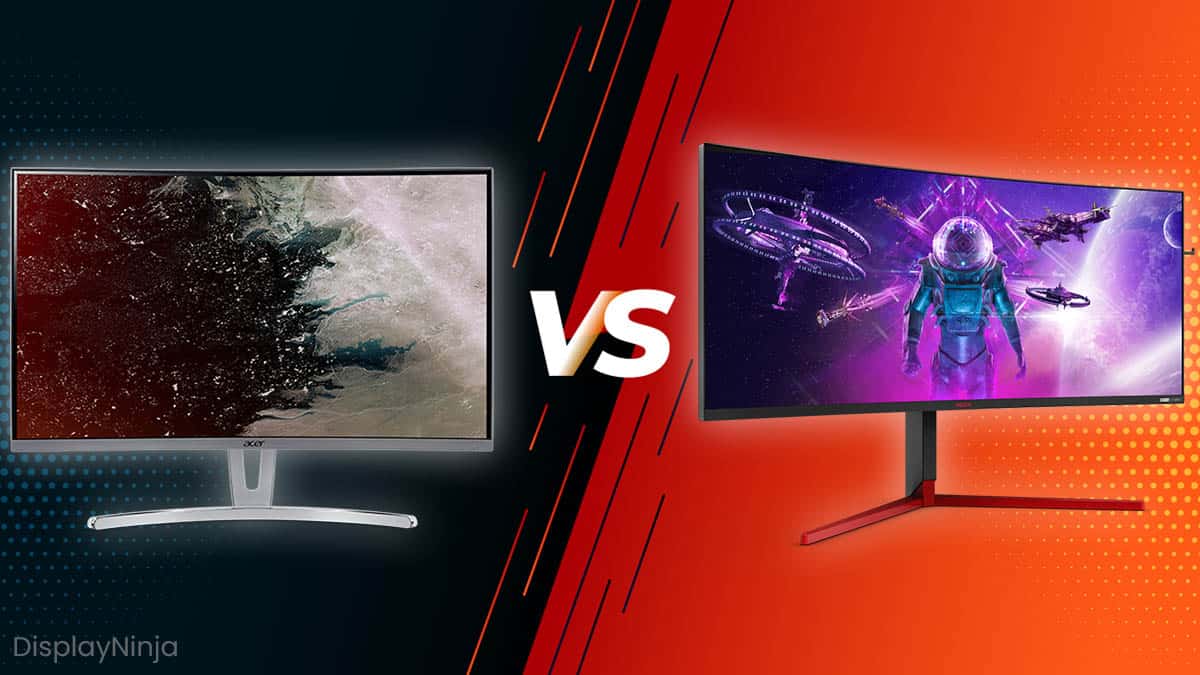 Native ‘G-SYNC’ support implies that a monitor has a dedicated module installed by NVIDIA while ‘G-SYNC Compatible’ relies on VESA’s Adaptive-Sync protocols over DisplayPort, HDMI and/or USB-C connection.

After the introduction of NVIDIA’s G-SYNC Compatible program, it didn’t take long for monitor manufacturers to manipulate it for advertising purposes.

In fact, you can now find ‘NVIDIA G-SYNC’ stickers on monitors that don’t have dedicated G-SYNC modules.

There are also monitor product pages that claim that the display is ‘G-SYNC Compatible,’ yet it’s not officially certified by NVIDIA as such.

Continue reading to learn what exactly is the difference between G-SYNC and G-SYNC Compatible monitors, and how can you check whether a monitor has a G-SYNC module and if it is officially certified as G-SYNC Compatible or not.

G-SYNC monitors have a special chip installed in them that replaces the regular scaler.

It allows the monitor to change its refresh rate dynamically — according to GPU’s frame rates (Hz=FPS), which in turn eliminates screen tearing and stuttering as long as your FPS doesn’t exceed the monitor’s maximum refresh rate.

Unlike V-Sync, though, G-SYNC does not introduce a significant input lag penalty.

In addition, a dedicated G-SYNC module offers variable overdrive. Gaming monitors use overdrive to push their response time speed so that the pixels can change from one color to another fast enough to prevent ghosting/trailing behind fast-moving objects.

However, most monitors without G-SYNC don’t have variable overdrive, but only fixed modes; for instance: Weak, Medium and Strong. The problem here is that different refresh rates require different levels of overdrive.

Now, at 144Hz, the ‘Strong’ overdrive mode might perfectly eliminate all trailing, but it also might be too aggressive if your FPS drops to ~60FPS/Hz, which will cause inverse ghosting or pixel overshoot.

For optimal performance in this case, you would need to manually change the overdrive mode according to your frame rate, which isn’t possible in video games where your frame rate fluctuates a lot.

G-SYNC’s variable overdrive can change on the fly according to your refresh rate, thus removing ghosting at high frame rates and preventing pixel overshoot at lower frame rates.

Some non-G-SYNC monitors support variable overdrive (Cooler Master GM27-CF and GM34-CW) and similar adaptive overdrive (Nixeus EDG27 and EDG274K), but at the moment, such displays are scarce.

Moreover, some FreeSync and/or G-SYNC Compatible monitors have exceptional overdrive where one mode works perfectly well across the entire refresh rate range, but this is rare as well.

Additionally, another advantage of having a dedicated G-SYNC module is a wide variable refresh rate (VRR) range. All G-SYNC monitors support VRR down from 30Hz up to their maximum refresh rate.

In contrast, most monitors that use Adaptive-Sync have their VRR range start at 40Hz or 48Hz. They also support frame rate multiplication via the AMD LFC (Low Framerate Compensation) technology, but only if the maximum refresh rate of a monitor is at least double the lower end of the VRR range.

Keep in mind that G-SYNC monitors only support G-SYNC over DisplayPort, at least at the time of this writing.

Even some revisions of older G-SYNC monitors such as the Dell AW3418DW now support Adaptive-Sync over DP.

Which Monitors Have Native G-SYNC Support?

Now, if you want a gaming monitor with an integrated G-SYNC module, you have to be careful when buying one.

In the picture above is the popular LG 27GL850, which has NVIDIA’s G-SYNC sticker, but this monitor does not have a dedicated module installed, NVIDIA just certified it as ‘G-SYNC Compatible.’

So, the best way to ensure you’re getting a native G-SYNC monitor is to visit NVIDIA’s website and check their list of G-SYNC monitors.

We also have a buyer’s guide for the best G-SYNC gaming monitors currently available, where you can check out which models are actually worth considering over the G-SYNC compatible counterparts.

What Does G-SYNC Compatible Mean?

Before NVIDIA allowed for Adaptive-Sync to be utilized with their graphics cards via a driver update in January 2019, if you had an NVIDIA GPU, you could only get a variable refresh rate on a native G-SYNC monitor.

So, what exactly differentiates a G-SYNC Compatible monitor from an Adaptive-Sync or FreeSync monitor?

A G-SYNC compatible monitor is essentially an Adaptive-Sync display that’s been validated by NVIDIA to work without any issues (such as flickering and other visual artifacts) through their testing.

At the moment, the G-SYNC Compatible mode is only supported over DisplayPort on monitors, and it requires a GTX 10-series or newer GPU, Windows 10 and at least the 417.71 NVIDIA drivers.

But that’s not all, Adaptive-Sync or FreeSync monitors that aren’t certified by NVIDIA as ‘G-SYNC Compatible’ can also utilize VRR if you have a compatible NVIDIA graphics card, but smooth performance is not guaranteed.

Depending on the monitor, it may work without any issues, with some minor or big problems, or it may not work at all.

In most cases, it works perfectly fine though you’ll need to enable G-SYNC manually in the NVIDIA control panel.

The most common issue is with gaming monitors based on VA panels, which frequently have the infamous brightness flickering issue, though it doesn’t affect every unit of a certain monitor model.

Which Monitors Are G-SYNC Compatible?

Just like it’s the case with native G-SYNC monitors, you have to be careful about false advertising when it comes to G-SYNC Compatible monitors.

Monitor manufacturers may claim that a monitor is G-SYNC Compatible on their website or on a product page of an online retailer, but that doesn’t necessarily mean that the monitor has been officially validated by NVIDIA as such.

It could mean that the verification process is still pending, that they have tested the monitor themselves, or it may mean nothing at all.

To be sure, you’ll have to visit NVIDIA’s official list of G-SYNC compatible monitors — if a monitor isn’t there, then it’s not officially certified.

As NVIDIA updates their drivers, they’ll be adding newly certified monitors to their list. They started with only 12 monitors, and at the time of this writing, they have over 100 certified displays.

So, if the monitor you’re interested in is not listed right now, it may be added later. Unfortunately, there’s no way to see which monitors didn’t pass the verification process.

We keep an updated list of all officially certified G-SYNC Compatible monitors with links to our reviews and retailers.

Additionally, we have an always up-to-date buyer’s guide for the best G-SYNC Compatible gaming monitors available.

What Is GPU Scaling?