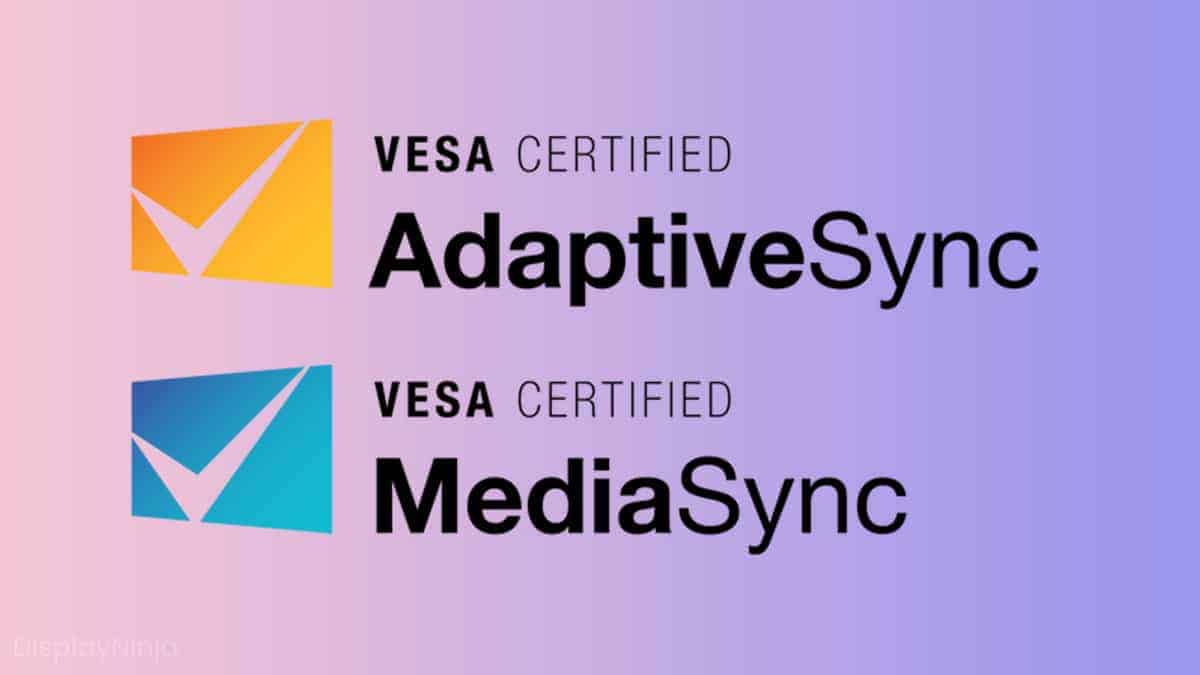 When it comes to gaming monitors, variable refresh rate performance has always been causing confusion – and numerous certifications did little to help.

Not to mention monitor manufacturers advertising their models as ‘G-SYNC Compatible’ without official support and AMD’s three-tier certification program with little to no testing or validation.

VESA’s AdaptiveSync certification aims to bring some order to this mess, while their MediaSync tier is reserved for video production and playback.

What Is AdaptiveSync Display?

In order for a display to receive the AdaptiveSync certification and logo, it will have to pass over 50 tests at its default settings. Most importantly, this includes pixel response time testing.

Instead, one of VESA’s requirements is that the average of over twenty GtG response time measurements is ≤ 5ms GtG with ≤ 20% overshoot and ≤ 15% undershoot, tested in ambient room temperature.

Other conditions include a minimum refresh rate of 144Hz, a minimum VRR range floor of 60Hz (for instance, 60-144Hz or wider) and no flicker, jitter, or frame drops.

All monitors that pass the above-mentioned criteria will get the VESA Certified AdaptiveSync Display logo with the number that matches the maximum refresh rate at which it passed the testing (144Hz, 165Hz, 240Hz, etc.).

One potential issue we see for this certification program is that VESA does all GtG tests at the maximum refresh rate only, according to their FAQ page.

There are many gaming monitors that work perfectly fine at a maximum refresh rate but introduce a considerable amount of overshoot at low frame/refresh rates due to aggressive overdrive, forcing you to swap between two or three overdrive modes (if available) depending on your FPS.

We’ll see how this turns out as more monitors get certified. A few monitors have already received certifications, all of which you can check out here.

Moving on, keep in mind that AdaptiveSync and Adaptive-Sync (with a hyphen or space between Adaptive and Sync) are two different things.

An AdaptiveSync display is a certified monitor by VESA, whereas Adaptive Sync generally refers to a variable refresh rate operation via protocols in the DisplayPort video interface.

In contrast, a variable refresh rate over HDMI is achieved via AMD FreeSync or HDMI 2.1 Forum VRR.

AdaptiveSync vs FreeSync vs G-SYNC

It’s possible for a gaming monitor to have all three certifications. In fact, the LG 27GP850 already has VESA’s AdaptiveSync, AMD’s FreeSync Premium and NVIDIA’s G-SYNC Compatible certifications – but which one is the most important?

Well, AMD’s requirements are very basic and vague, while NVIDIA’s G-SYNC Compatible validation has more rigorous criteria but we don’t know anything about the actual tests displays have to pass.

However, we do believe that some G-SYNC Compatible displays, such as the Acer ED273A and the Samsung C27RG5, wouldn’t pass some of VESA’s AdaptiveSync tests due to their slow response time and VRR brightness flickering.

A monitor with a dedicated G-SYNC module, however, still promises the best VRR performance given that AdaptiveSync doesn’t require variable overdrive or a single overdrive mode that works best across the entire refresh rate range.

What Is MediaSync Display?

It has a minimum refresh rate requirement of 60Hz, but the VRR range floor must be wider, at least 48Hz (so, 48-60Hz or wider).

This will ensure that the monitor/TV can display popular video frame rates (23.976FPS, 24FPS, 30FPS, etc.) without a 3:2 pulldown jitter.

For instance, when watching 24FPS content, a MediaSync display will change its refresh rate to 48Hz, showing each frame twice for smooth playback. In contrast, at a fixed 60Hz refresh rate, it would need to alternate between adding 3 and 2 frames (3:2 pulldown), which causes jitter.

Note that a display won’t have both MediaSync and AdaptiveSync certifications, since the latter is a superset of the former. An AdaptiveSync display automatically meets all MediaSync requirements, including the following tests: