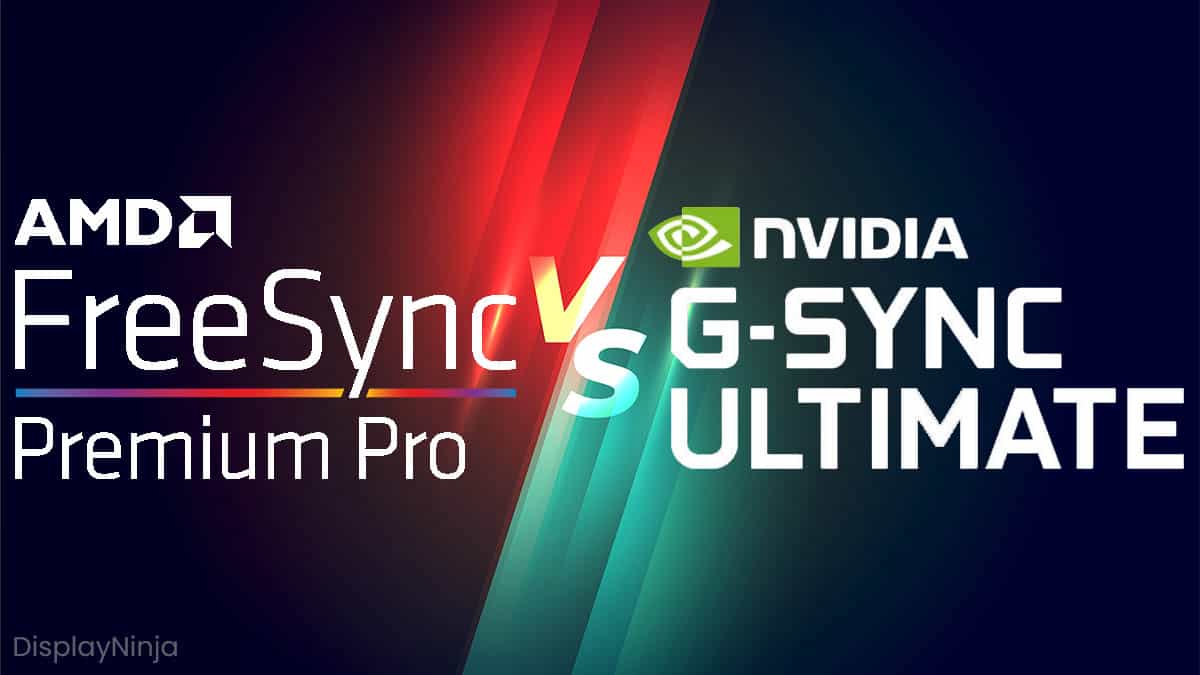 Choosing between G-SYNC Ultimate and FreeSync Premium Pro mostly comes down to your budget. The former is usually only available in high-end displays, while the latter can be found on more affordable monitors.

HDR (High Dynamic Range) is arguably the next big step in PC gaming, and while it still requires some work to be done to be perfectly viable, both AMD and NVIDIA have their own implementations to address the issues when it comes to using HDR in Windows.

When both a video game and monitor support HDR, the viewing experience is improved with better colors, brightness, and contrast ratio to create the picture the way game developers intended.

Of course, for this to work, the HDR monitor in question needs to meet certain display requirements regarding its capabilities (color gamut, maximum brightness, etc.).

So, what is the role of FreeSync Premium Pro and G-SYNC Ultimate in all this?

Well, first off, a display with any of these two technologies will have to pass an evaluation concerning its input lag, color gamut, refresh rate and other features – with higher requirements being set by NVIDIA.

Both technologies still feature a variable refresh rate (VRR), which is the main asset of previous-gen FreeSync and G-SYNC.

Unlike the first-generation FreeSync displays, for a monitor to feature FreeSync Premium Pro (previously known as ‘FreeSync 2’ and ‘FreeSync 2 HDR’), it will have to meet a certain set of requirements.

Firstly, all FreeSync Premium Pro monitors must support LFC (Low Framerate Compensation), which means that their VRR range must be at least 2:1.

This allows the display to multiply its refresh rate when your frame rate drops below the lower end of the range (for example, 49FPS = 98Hz) to keep tearing at bay.

Secondly, a FreeSync Premium Pro display must have low input lag, a peak brightness of at least 400-nits and a wide color gamut (at least 90% DCI-P3).

How Does It Work?

As you can see in the image above, there’s a lower latency between HDR rendering and the final stage since FreeSync Premium Pro eliminates one tone mapping process.

In other words, tone mapping is done directly between a video game and the native color gamut of the display, which in turn lowers the input lag and delivers optimal image quality in accordance with the display’s capabilities.

This means that the game itself must have tone mapping done for FreeSync Premium Pro. You can find a list of compatible games here.

If you have a FreeSync Premium Pro monitor, but the game doesn’t support it, you can still use FreeSync and HDR at the same time with low input lag, but whether the HDR picture will actually be good will depend on the game and the display’s HDR capabilities.

Watching other content in HDR is still an issue due to its bad implementation in Windows.

There’s no optimal HDR color management system for color spaces other than sRGB when it comes to other Windows applications.

This means that you will have to manually enable/disable HDR in the settings when you want to watch HDR content, which will make all non-HDR content over-saturated or washed-out and overall unpleasant to look at.

While HDR still isn’t completely optimized for PC, FreeSync Premium Pro monitors at least make it easy to use for gaming.

As a result, these gaming monitors will have an added cost, but still not as high as G-SYNC Ultimate or even G-SYNC displays for that matter.

We have a dedicated buyer’s guide for the best FreeSync Premium Pro monitors.

NVIDIA hasn’t revealed as much information as AMD regarding how their technology works, but it likely works on a similar principle.

Note that the G-SYNC Ultimate display requirements have changed over time.

The first few G-SYNC Ultimate monitors had to have a high peak brightness of at least 1,000-nits and full-array local dimming (FALD), such as the Acer X35 with 512-zone FALD or the ASUS PG27UQ with 384-zone FALD.

These zones can dim parts of the image that needs to be dark, without affecting parts of the screen that need to be bright. This greatly increases the contrast ratio as you can simultaneously have bright highlights and inky blacks with vivid details in shadows.

For instance, the Dell AW2721D has the G-SYNC Ultimate certification, but its 32 edge-lit dimming zones are nowhere near as effective as the 384-zone FALD system of the ASUS PG27UQ, for instance.

So, with a G-SYNC Ultimate monitor, you’re getting a display with a dedicated G-SYNC module and HDR image quality that’s on par with at least DisplayHDR 600.

In truth, most modern gaming displays offer low input lag and smooth VRR performance nowadays, with our without certifications from AMD and NVIDIA.

So, if you want a monitor with excellent HDR image quality, you should look at its display capabilities. Basically, it should either have an OLED panel or a (mini) LED panel with full-array local dimming.

Are UltraWide Monitors Worth It?