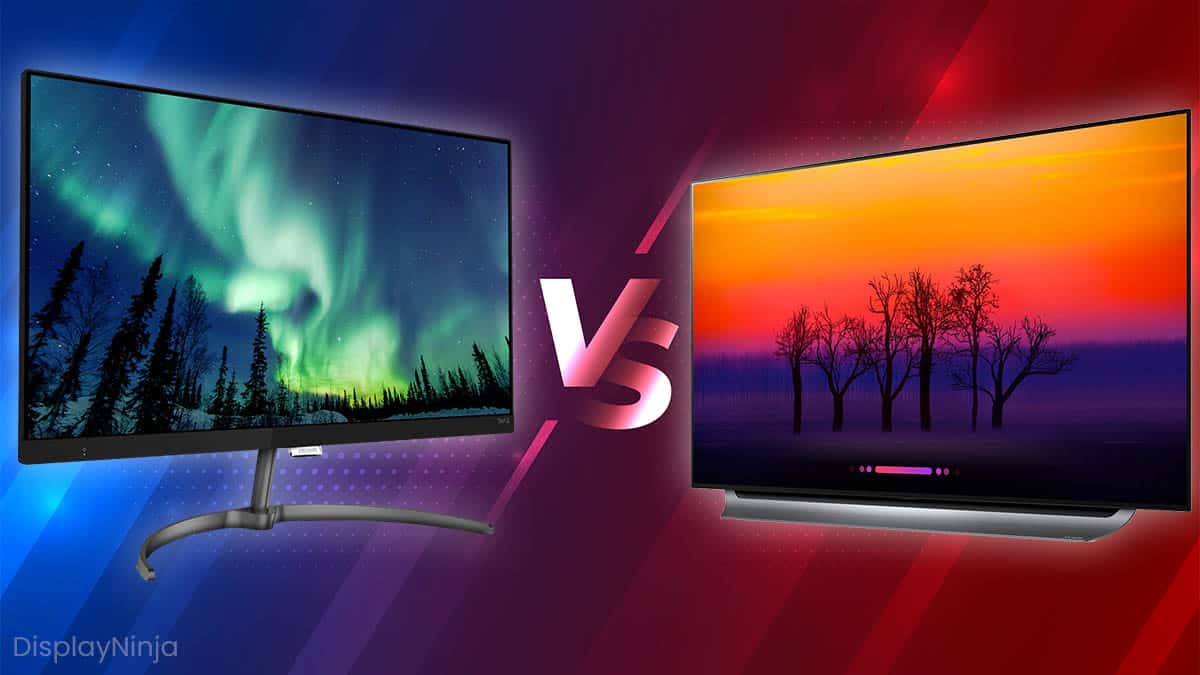 While OLED panels produce true blacks and have an instantaneous pixel response time speed, you have to look out for image burn-in and retention. Moreover, OLED displays can’t get as bright as some high-end LED-backlit LCDs with IPS or VA panels.

IPS panels have a slower response time and lower contrast, which when combined with IPS glow and backlight bleed results in grayish blacks in comparison to that of OLED displays and an overall inferior viewing experience, but there’s no risk of burn-in.

With OLED prices steadily going down, you are probably wondering whether you should finally get one or stick with the old and trusted IPS technology. Here’s what you need to keep in mind when choosing between these panel types.

First of all, what makes these two panel technologies genuinely different?

Unlike LCD LED panels such as VA, TN and IPS, OLED displays don’t rely on a backlight to produce the image.

Instead, each pixel emits its own light, which allows for an infinite contrast ratio that results in stunning image quality with true blacks and without backlight bleeding, glowing, blooming, or other visual artifacts.

That’s why in comparison to OLED displays, IPS and even VA TVs and monitors have grayish blacks. But, there are still many other things to consider.

The main problem of OLED displays is image burn-in.

If you leave your TV or monitor with a static image for a long time, there’s a chance the image will burn in and become permanently visible in the background.

Newer OLED models, however, have built-in screen savers, pixel shifters and other features to prevent this, but you still need to be careful.

Another problem is image retention, which is similar to image burn-in, but it’s not permanent as it goes away after a few minutes or after you refresh pixels using a dedicated display’s feature.

Still, if you play video games on an OLED display for a long time, fixed HUD items such as mini-maps, health bars, menus, etc. may remain visible for some time even after the image has changed. A lot of games have dedicated options to auto-hide fixed elements in games precisely for this reason.

Overall, you can still enjoy playing your favorite game for hours every day without worrying. Just don’t leave the same static image on the screen for too long and play varying content so that the pixels refresh.

For instance, after playing a game for four hours or more, just play a YouTube video without static elements for a while, and you’ll be fine.

Burn-in is also a concern if you plan on doing office-related and/or color-critical work as every application has a lot of static elements, but as long as you play different content every now and then, it won’t be an issue.

For most people, the display size is the first thing to look for when buying a new TV or monitor.

We have yet to see 27″ and 32″ high refresh rate OLED displays, which are the most demanded monitor sizes by gamers.

Regular LED-backlit displays, on the other hand, are available in various sizes ranging from 14-inch to over 100-inch models.

When it comes to HDR, both technologies have their advantages and disadvantages.

IPS panels have a low native contrast ratio, so they need an expensive full-array local dimming (FALD) implementation to overcome that.

A FALD system consists of numerous dimming zones (for instance, 1152) which dim parts of the screen where the image is supposed to be dark without greatly affecting parts that are supposed to remain bright, thus significantly increasing the contrast ratio.

However, even 1152 zones are not enough for some demanding scenes; if you have small bright objects on a dark background – for instance, stars in a night sky, the light from those objects will bleed into the surrounding dimmed zones, which creates blooming.

As each pixel is self-emissive on an OLED display, you essentially get over 8 million dimming zones on a 4K panel, resulting in a much better image quality overall without any blooming.

The main advantage of IPS panels is that they can get much brighter, especially if they’re enhanced with a mini LED backlight. Mini LED displays can reach over 2,000-nits of peak brightness, while OLED displays are usually limited to around 1,000-nits.

1,000-nits is still enough to create punchy highlights under normal lighting conditions, but if you’re watching the screen in a particularly bright room, HDR content can appear underwhelming on OLED displays in comparison to mini LED LCDs.

So, it all comes down to your personal preference.

If you can control the lighting in your room, OLED will deliver a better HDR image quality. In case you have a room with plenty of lighting without any options to block it, a good mini LED display will offer a much brighter image that’ll easily overcome glare.

Keep in mind that mini LED and FALD backlights aren’t exclusive to IPS technology. You can also find them paired with VA panels, which have a higher native contrast ratio, but not as wide viewing angles or as consistent colors as IPS.

Related:IPS vs TN vs VA – Which Panel Type Should I Choose?

However, since the DCI-P3 color space is used for HDR content, OLED displays depict content the way its creators intended, while the other wide gamuts are mainly used for professional color-critical work.

There are OLED panels, such as JOLED and Samsung’s QD-OLED, which have a wider gamut coverage (~80% Rec.2020) than W-OLED; more on that later.

In terms of color consistency and accuracy, both IPS and OLED panels have precise color reproduction and wide viewing angles, though the picture is a bit better on OLED displays when viewed from particularly skewed angles.

Another big advantage of OLED panels is the instantaneous pixel response time speed that ensures there’s no noticeable ghosting or overshoot behind fast-moving objects, regardless of the refresh rate.

With IPS displays, the response time performance varies from panel to panel. However, even the fastest IPS panel isn’t as quick as OLED, but as long as its pixels transitions can keep up with the refresh rate, gaming performance will be smooth.

However, because high refresh rates bring lower input lag, competitive and professional gamers will always aim for the fastest panel and there are IPS monitors with up to 390Hz!

Another advantage of OLED technology is that they look better when displaying a non-native resolution. So, if 4K is too demanding for your system, running a 4K OLED at 2560×1440 will look better than running the same resolution on a 4K IPS display.

Samsung’s QD-OLED technology improves on other OLED panels, which are mainly made by LG and JOLED.

Related:OLED vs QD-OLED – What Is The Difference?

While OLED panels should last as long as the LED ones, this hasn’t yet been confirmed, as OLED TVs are relatively new on the market.

Power consumption between the two is pretty much the same, depending on what brightness settings you are using.

While both panel technologies allow the display to be very thin, OLED displays can be a lot thinner than LED LCDs.

Finally, we get to the price. As there’s no such a thing as a budget OLED display, it’s not possible to compare it to a $200 IPS monitor, for instance; nor can the image quality compare between the two.

Mini LED LCDs are brighter and don’t suffer from the burn-in risk, but they have an inferior contrast ratio with blooming artifacts and slower response time yet they’re basically double or triple the price! This is why most users opt for OLED technology for HDR content.

In the future, Samsung’s QD-OLED panels should bring even better image quality at a lower cost, so mini LED FALD displays, with either IPS or VA panels, will need to drastically drop in price in order to be competitive.