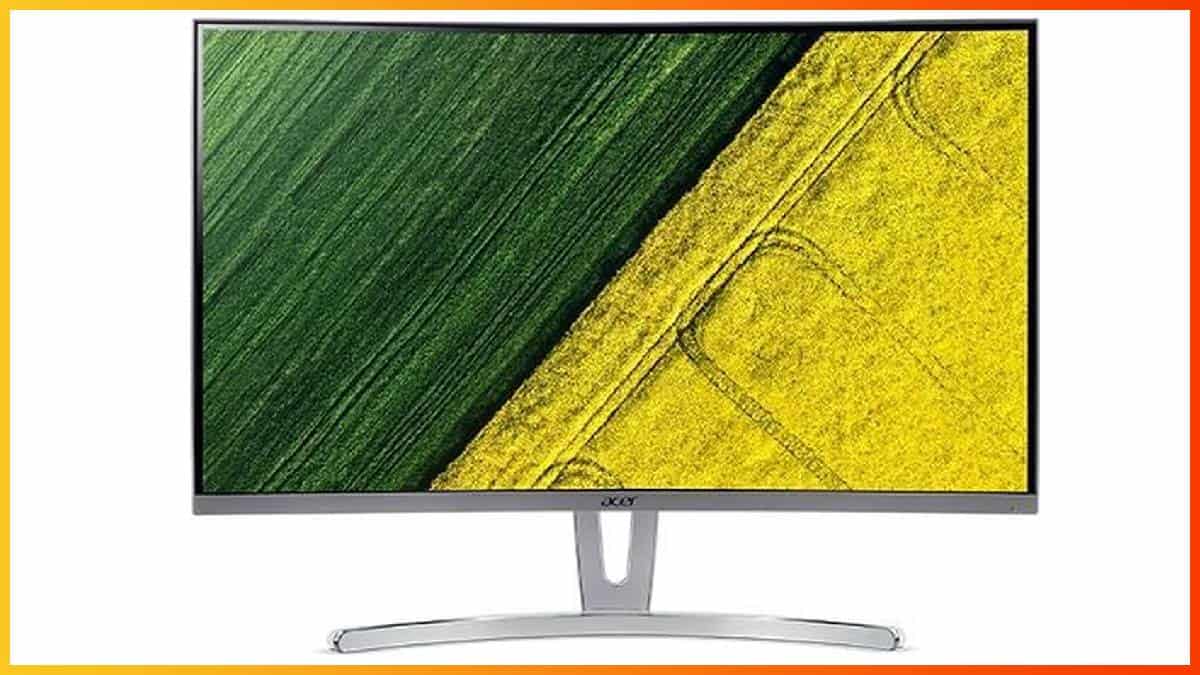 The Acer ED273A offers an immersive gaming experience and smooth performance. However, for less money, you can find better 24″ models with a higher pixel density and motion blur reduction. There are also similarly priced 1080p 144Hz IPS models available, which are a lot better for fast-paced games.

It has no backlight strobing technology like some of its alternatives, but it’s certified as G-SYNC compatible by NVIDIA.

Note that the full name of this monitor is Acer ED273 Abidpx.

However, since there’s also the Acer ED273 wmidx model (with a 75Hz refresh rate), the 144Hz model is usually referred to as the ED273A.

The monitor is based on a VA (Vertical Alignment) panel, which gives a high static contrast ratio of 3,000:1, a solid peak brightness of 250-nits, and 8-bit color depth.

Further, VA panels have 178-degree viewing angles, so the image won’t shift in contrast, color, or brightness when looking at the screen from skewed angles.

Such high contrast ratio allows for deep blacks, which make black shades on IPS and TN panels (with a 1,000:1 static contrast ratio) appear grayish in comparison.

The colors are not as accurate nor consistent as that of IPS panel displays, but they are gorgeous nonetheless and much better than that of any equally priced TN display.

Now, the biggest downside of the Acer ED273A monitor is the low pixel-per-inch ratio. 1080p on a 27″ screen results in a pixel density of ~81 pixels per inch (PPI).

In comparison to 24″ 1080p monitors (~91 PPI), everything on the desktop (icons, text, details, etc.) will seem bigger and less clear, thus decreasing the amount of available screen real estate and detail sharpness.

In video games or while watching movies/videos, this isn’t as bothersome as it is when reading and typing. So, if you need a similar monitor for both gaming and work, we recommend getting a 24″ 1080p display instead for sharper text and details.

Another downside of the Acer ED273A curved gaming monitor is the response time speed, which is the main problem of most VA panel displays.

Although the response time is specified to be 4ms (GtG), there is a noticeable trailing of fast-moving objects. For the most part, it’s tolerable given the price and image quality of this 144Hz gaming monitor.

However, when there are mostly dark pixels in the picture, dark trailing and smearing become more apparent in fast-paced video games.

Overall, it’s bearable and actually not an issue if you play non-competitive or slow-paced games, but if you mostly play online first-person shooters, you’d be better off with a similarly-priced TN or IPS display with a faster response time speed.

Moving on, the Acer ED273A input lag amounts to only ~5ms of delay, which is not noticeable even by professional gamers.

The backlight of the monitor is flicker-free, and there’s a low-blue light filter, so you don’t have to worry about headaches or eye strain if you are sensitive to screen flicker or low-blue light.

FreeSync eliminates screen tearing and stuttering with minimal (~1ms) input lag penalty as long as your FPS (Frames Per Second) is within the VRR (variable refresh rate) range.

You will need a compatible graphics card by AMD or NVIDIA for this technology to work.

Note that NVIDIA has certified the Acer ED273A display as G-SYNC compatible, which guarantees smooth performance when using FreeSync with a compatible NVIDIA GPU.

Important: Regardless of its certified G-SYNC compatibility, some users experience brightness flickering when FreeSync/G-SYNC is enabled.

This only affects some units of the monitor, and the brightness flickering is mostly present below 48FPS and/or when your frame rate fluctuates a lot.

Other gaming-related features include Black Boost, which increases the visibility of objects in the dark without overexposing bright areas and Aim Point, which consists of customizable crosshair overlays.

Standard adjustments such as contrast/brightness, gamma, color temperature, input source, volume, etc. are available as well. The OSD (On-Screen Display) menu style is quite outdated, but at least the navigation through it is easy thanks to the joystick.

The Acer ED273A price usually ranges from $200 to $250, which is a bit steep as you can get better gaming monitors for less money.

Lastly, in case you want the best performance in competitive games and don’t care much for image quality, check out the AOC G2590FX with a TN panel and a rapid 1ms response time speed.

All in all, the Acer ED273A is a decent gaming monitor. However, there are cheaper yet better alternatives available.