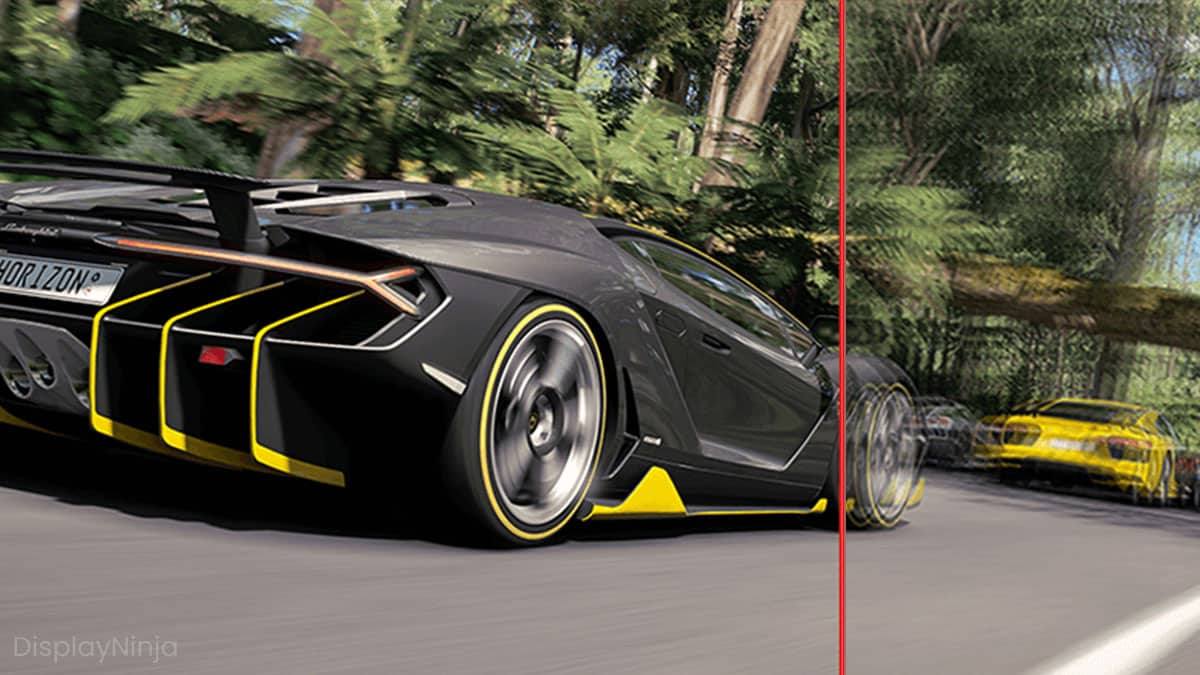 Most VA panel monitors have slow black to gray pixel transition speed, resulting in noticeable trailing behind fast-moving objects in dark scenes – this is often referred to as dark level smearing.

While this is a fundamental weakness of most monitors using VA panel technology, there are some things you can do to reduce it a bit and even make it negligible or tolerable.

Do you have a gaming monitor with a VA (Vertical Alignment) panel and want to reduce the amount of visible trailing behind fast-moving objects in dark scenes?

Are you interested in buying a VA monitor, but are worried about the infamous dark level VA smearing?

In this article, we’ll go over everything you can do to reduce black level smearing and address any controversy surrounding this panel technology.

What Is VA Smearing?

We’ll take a 144Hz gaming monitor for an example – it refreshes the screen 144 times per second, so there’s a new ‘frame’ every 6.94ms. Now, if pixels change from one color to another slower than that, you will see trailing artifacts behind fast-moving objects.

A certain 144Hz gaming monitor might have a 4ms GtG (gray to gray) pixel response time speed specified, however, this is just marketing shenanigans as it doesn’t actually refer to the average pixel transition speed – but rather the fastest possible.

VA panel monitors, in particular, have very slow pixel transitions from dark to gray or bright shades (rise time), which results in a lot of visible ghosting (i.e. trailing) artifacts behind fast-moving objects when a lot of dark pixels are involved in the scene.

Most VA monitors are affected by this, with the exclusion of Samsung’s Odyssey G9, Neo G9 and G7 curved gaming displays.

So, is there anything you can do about this?

To start with, you need to make sure you’re using optimal response time overdrive settings. Go to Blur Buster’s ghosting test and track the moving UFO with your eyes; you’ll notice that it leaves trails as it moves.

Now go to your monitor’s OSD (On-Screen Display) menu and find an option called something along the lines of Overdrive, OD, Response Time, SmartResponse, TraceFree, etc.

You will find a few different options there, such as Weak, Medium, Strong or Off, Normal, Extreme.

Try out the different options available and hopefully you will see some improvements.

Stronger overdrive makes the pixels transition faster, but a too aggressive setting can cause inverse ghosting (i.e. pixel overshoot), which leaves bright (instead of dark) ghosting artifacts.

If you are using AMD FreeSync variable refresh rate (VRR) technology, you might also need to change the overdrive mode depending on your frame rate.

For instance, the ‘Strong’ overdrive might look the best to you at 144Hz, but if your frame rate is around 60FPS, VRR dynamically changes your refresh rate to 60Hz and the ‘Strong’ mode might be too aggressive here thus causing overshoot.

So, you will need to see which overdrive mode works best at 60Hz and use that instead when using VRR around 60FPS, and so forth.

You should also keep in mind that monitors have better pixel response time performance after they’ve warmed up a bit. So, let them run for at least 30 minutes before choosing the best overdrive mode.

If you’re already using optimal overdrive settings, another thing you might want to consider is to lower your refresh rate in order to reduce VA smearing.

The pixels might not be quick enough to change in time at 144Hz, for instance, but at 100Hz or 120Hz, you leave them more headroom, which can result in less noticeable smearing.

Another thing you can do to reduce VA smearing is to use the monitor’s Black Equalizer feature. Depending on the brand, this feature can go under different names, such as Shadow Boost, Black Boost, Shadow Control, Black Level and similar.

This feature essentially alters the gamma curvature, making blacks lighter and dark objects easier to distinguish in shadows; the downside is that blacks won’t be as deep.

If your monitor doesn’t have a Black Equalizer feature, you can change the gamma settings – 2.2 is the default, lower gamma (2.0 and 1.8) will have lighter blacks.

Since using any of these features makes the overall image appear more washed out, you might want to use it in conjunction with color vibrancy settings, either via GPU drivers or if your monitor has such an option available in its OSD menu.

These methods can be useful if you already have a VA panel monitor, but in case you’re worried about smearing and are yet to buy a new monitor for fast-paced gaming, it’s best to just pick an IPS gaming display; it will have a lower contrast ratio, but you’re already sacrificing contrast ratio on VA monitors via features such as Black Equalizer.

If your gaming monitor has MBR (Motion Blur Reduction) technology, it might help clear up the smearing a bit.

MBR uses backlight strobing to reduce perceived motion blur at a cost of picture brightness. Most MBR implementations cannot be used at the same time as VRR.

Further, MBR introduces screen flickering that’s invisible to the human eye, but may cause headaches or eye strain to those sensitive to it after prolonged use.

Some post-processing settings used in addition to VA’s slow pixel rise times can cause the glimmering effect when using a mouse/controller to pan at a certain speed – as you see in the (left) video above.

By simply disabling the sharpening setting in the game’s graphic options, you can prevent this from happening. Applying some anti-aliasing can also reduce this effect if you prefer to use the sharpening option.

In other games, it might be another post-processing option that causes this (usually temporal anti-aliasing or TAA) so if you experience it, try enabling/disabling different settings.

Some video games might have a sharpening-like filter applied to the game without providing you with the option to disable it in the game’s video settings.

In this case, you can search for other methods to disable it, such as the game’s .ini files or via mods, command lines, etc. You can also use Reshade to inject certain post-processing effects into the game.

Hopefully, you managed to reduce VA smearing a bit using one of the methods above!

If you’ve been considering buying a high refresh rate VA gaming monitor, this article wasn’t intended to dissuade you from it. In truth, a lot of gamers wouldn’t even notice this dark level smearing until someone pointed it out to them, and even then, a lot of users wouldn’t be bothered by it.

Of course, in case you’re sensitive to these artifacts, it’s best to just get an IPS gaming monitor with a fast response time speed. Nowadays, you can find them at the same or similar price as the VA counterparts.

You should also keep in mind that VA monitors suffer from VRR brightness flickering and gamma/saturation shifts, whereas the main downside of IPS monitors is the low ~1,000:1 contrast ratio and IPS glow.

Mechanical vs Membrane Keyboard – Which One Should I Choose?