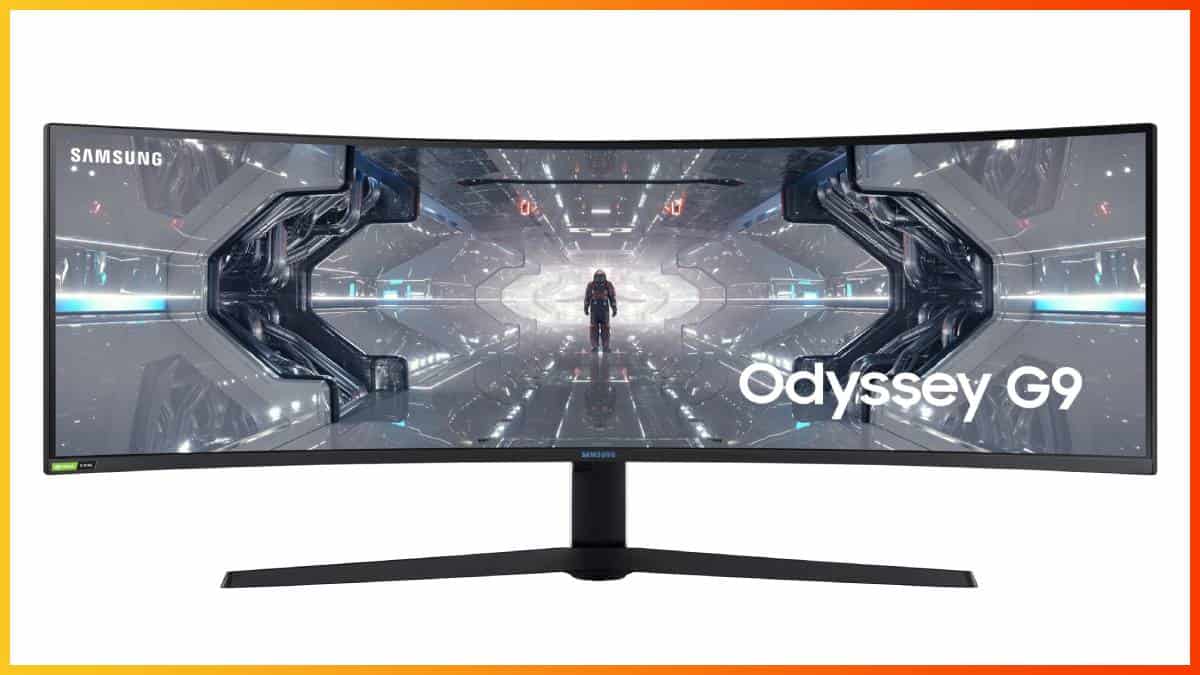 The Samsung C49G95T (Odyssey G9) is an amazing monitor that offers an unprecedented gaming experience thanks to its giant 49″ screen with a steep 1000R curvature.

The Samsung C49G95T (Odyssey G9) offers an incredibly immersive viewing experience thanks to its huge 49″ 5120×1440 curved screen that’s based on a VA panel with a high contrast ratio, high peak brightness, and wide color gamut.

Such high pixel density provides you with sharp text and details as well as plenty of screen space without any scaling necessary!

The extra horizontal screen space of the 32:9 super-ultrawide aspect ratio is also very useful for productivity work, video editing, and gaming, but not all games support this format natively.

Luckily, in most newer games, the 32:9 format is supported. In some games, you may need to tweak the FOV (Field of View) setting to your liking.

In unsupported games, you can just play with the regular 16:9 or 21:9 format and have black bars at the sides of the picture – or you can choose to stretch out or cut/zoom in the image to fill the screen.

Moving on, the Samsung C49G95T monitor features a QDEF (quantum dot enhanced film) layer, which is responsible for its wide color gamut and strong peak brightness.

Further, the peak brightness of 420-nits can jump up to 1,000-nits when watching HDR content, which in combination with the excellent static contrast ratio of 2,500:1, results in striking highlights and vivid details in shadows.

The monitor also supports local dimming, but since there are only ten dimming zones spread across its gigantic 49″ sized screen, it’s not particularly effective.

Of course, if the Samsung G9 had a full-array local dimming solution, it would also be significantly more expensive.

Regardless, HDR content gets a notable boost in picture quality thanks to the monitor’s good static contrast ratio, high brightness, and wide color gamut.

This measure doesn’t represent an average GtG performance, but rather the fastest possible transition of one gray shade into another under specific testing conditions, so some smearing behind fast-moving objects will be noticeable.

However, it’s only noticeable with fast-moving objects in really dark scenes – if you’re deliberately looking for it.

So, you won’t be bothered by it unless you’re a professional FPS gamer, in which case you should be getting a smaller and faster display anyway.

We recommend sticking with the Faster mode as Fastest can introduce some pixel overshoot i.e., inverse ghosting.

Unlike the Odyssey G7 models, the Samsung C49G95T doesn’t support Motion Blur Reduction, which could further decrease ghosting at the cost of picture brightness and variable refresh rate, but it’s not necessary either.

At 240Hz, input lag amounts to only ~3ms, which results in imperceptible delay between your actions and the result on the screen.

The Adaptive-Sync technology is supported, which provides a variable refresh rate (VRR) for compatible graphics cards.

Both AMD FreeSync Premium Pro and NVIDIA G-SYNC Compatible certifications are present while the VRR range amounts to 60-240Hz. As long as your frame rate is within this range, VRR will remove tearing and stuttering.

While FreeSync/G-SYNC is enabled, you cannot change the response time overdrive mode, but the pixel transition performance is consistent across the entire refresh rate range.

At higher frame rates (220 – 240FPS), pixel overshoot becomes noticeable, so if it bothers you, we recommend simply capping your frame rate to ~220FPS or reducing the refresh rate.

While there was no FreeSync brightness flickering on our unit, this is a common issue for VA panel gaming monitors, and other units may be affected by it. In case you get a unit with brightness flickering, make sure you have at least the 1008.1 firmware installed and check the VRR Control option in the OSD menu.

Some users report that the VRR Control option replaces brightness flickering with micro-stuttering, though it doesn’t seem to affect every unit – a lot of users might not be bothered by it too.

To access and navigate the OSD (On-Screen Display) menu of the Samsung G9, you can use the joystick placed beneath the bottom bezel of the screen. The menu is user-friendly and offers plenty of useful features.

For gaming, there are standard game-enhancing utilities such as Virtual Aim Point (custom crosshairs) and Black Equalizer (improves visibility in darker games).

The Picture in Picture (PiP) and Picture by Picture (PbP) modes are supported as well.

However, you can’t use FreeSync/G-SYNC or HDR in the PbP mode, and you’ll be limited to 120Hz if you have the 1006.2 firmware or newer.

Considering that there are only 10 dimming zones, this isn’t a big issue really.

We also recommend leaving the Dynamic Brightness option at ‘Off.’ These features automatically adjust the screen brightness according to the content on the screen, which can cause brightness fluctuations.

The Samsung C49G95T boasts a futuristic design with a glossy white chassis, robust build, and decent ergonomics, including up to 120mm height adjustment, -5°/15° tilt, +/- 15° swivel, and 100x100mm VESA mount compatibility.

At the back of the monitor, there’s the Infinity Core RGB lighting, which you can customize with five different effects (rainbow, pulse, static, etc.) and 52 different colors. There’s also a headset hanger at the top of the stand.

The screen has a matte anti-glare screen coating, which eliminates reflections while the aggressive 1000R curvature matches the curvature of the human eye for a more immersive viewing and gaming experience.

Other displays worth considering at this price range include LG’s 48″ C1 OLED TV, the 42″ LG C2 TV, the Dell AW3423DWF and the Samsung Neo G7 – all of which offer better HDR image quality.

There’s also the Samsung Odyssey Neo G9, which is similar to the G9 but has a 2048-zone mini LED FALD backlight for significantly better HDR image quality. However, it goes for ~$1,700.

The Samsung Odyssey G9 offers an incredible viewing and gaming experience thanks to its gigantic screen size with a steep 1000R curvature.