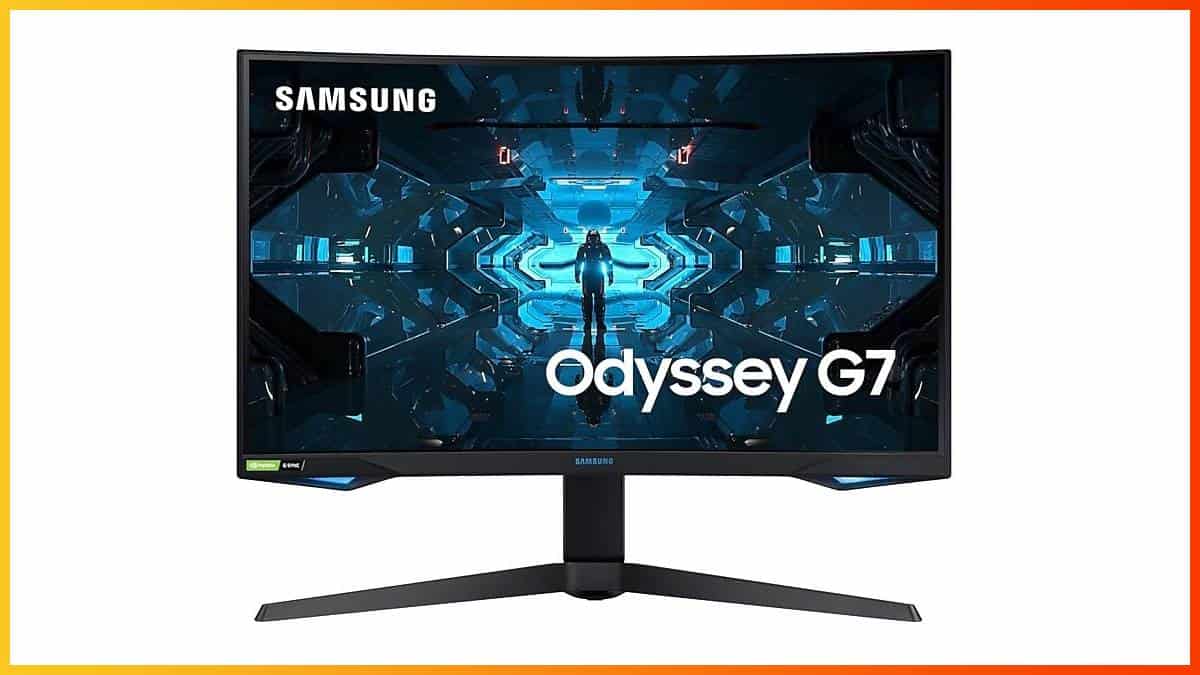 There are plenty of useful features available too including an ergonomic stand and rich connectivity options. Sadly, there are some issues with VRR and some users might not like the aggressive 1000R screen curvature.

The Samsung C32G75T is the first VA panel gaming monitor with a 1ms GtG response time speed, thus combining a high contrast ratio with fast pixel transition, something which many gamers have been waiting for.

Other specifications are impressive as well, including DisplayHDR 600 support, certified G-SYNC compatibility, 1440p resolution, and 240Hz.

The monitor is based on Samsung’s VA panel and features a QDEF (quantum dot enhanced film) layer (also referred to as ‘QLED’) for improved colors and stronger brightness.

It supports a 95% DCI-P3 wide color gamut (equivalent to ~125% sRGB), which results in more lifelike and vibrant colors.

Other panel-related specs include 178° wide viewing angles, a 350-nit peak brightness which gets a boost up to 600-nits for HDR content, and a static contrast ratio of 2,500:1 for deep and vivid blacks.

The monitor has an edge-lit backlight with 8 dimming zones, which can further push the contrast ratio by dimming parts of the screen according to the displayed content.

However, as there are only 8 zones on the monitor’s big 32″ sized screen, the local dimming solution is not particularly effective.

For the true HDR viewing experience, a 32″ LED-backlit monitor would preferably need over 1,000 dimming zones, but this would also significantly increase the monitor’s price.

Regardless, thanks to the monitor’s wide color gamut, high contrast ratio, and strong peak brightness, it delivers a good HDR picture quality overall with notable improvement over SDR.

For the best HDR image quality, be sure to increase the monitor’s brightness as it’s set to only 30% out of the box.

Moving on, the Samsung C32G75T has the same pixel density as a 24″ 1080p monitor, which is ~93 PPI (pixels per inch). So, you aren’t getting the sharpest detail clarity, but it’s very good nonetheless.

In fact, at just ~3 ft/1 meter away from the screen, you won’t be able to distinguish the individual pixels.

The Odyssey G7 series also includes a 27″ sized variant, the Samsung C27G75T, with the same specifications. It offers a higher pixel density, whereas the 32″ model offers a more immersive gaming experience due to the bigger screen.

Thanks to the monitor’s rapid 240Hz refresh rate, you get buttery-smooth motion clarity while the input lag of only ~2ms makes for imperceptible delay.

The pixel response time speed is impressive, as well. In fact, the Odyssey G7 monitors are the fastest VA displays available at the time of this writing.

While there is still some dark trialing visible behind fast-moving objects, it’s not as noticeable or as bothersome as it is on older VA panel gaming displays.

There are three response time overdrive levels: Standard, Faster, and Fastest as well as the ‘Fastest (MBR)’ mode, which enables backlight strobing for even better motion clarity at the cost of picture brightness.

We recommend using either the Faster or Fastest options. ‘Fastest’ results in less ghosting, but a bit more pixel overshoot (inverse ghosting), so you’ll have to choose what looks best to you.

The Fastest (MBR) mode is also very useful as even though it sacrifices picture brightness, the screen is more than bright enough under normal lighting conditions. However, you can’t use MBR and FreeSync at the same time.

As long as your frame rate is within the VRR range, there will be no screen tearing or stuttering as the monitor can change its refresh rate dynamically – according to your FPS.

When your frame rate drops below the VRR range, the refresh rate will be multiplied for smoother performance (79FPS -> 237Hz, etc.). AMD calls this LFC or Low Framerate Compensation.

Once you enable FreeSync, you won’t be able to adjust the response time overdrive, but as there’s no big difference between the modes anyway, the performance is consistent across the entire variable refresh rate range.

Make sure you have at least the 1009.3 firmware installed in order to eliminate the brightness flickering issue associated with VRR.

The firmware adds a ‘VRR Control’ option to the OSD menu that prevents brightness flickering, but it can introduce micro stuttering, which some gamers are sensitive to. Some users don’t experience this issue though.

The OSD (On-Screen Display) menu of the monitor is user-friendly and offers a bunch of useful features. Navigation through the menu is quick and easy thanks to the joystick placed beneath the bottom bezel of the screen.

For gaming, you get Black Equalizer, which improves visibility in darker games by altering the gamma curvature, Virtual Aim Point (cheat crosshairs), and various picture modes (FPS, RTS, RPG, and AOS as well as PiP/PbP).

The Samsung G7 monitor has a flicker-free backlight and an integrated low-blue light filter. In the OSD menu, it’s also possible to disable local dimming.

The monitor’s 1000R curvature is supposed to match the curvature of the human eye. Whether this is a good thing or not depends on personal preference. Some absolutely love it, some despise it, and some don’t really care that much.

It does add extra depth to the picture, and it may seem a bit weird in the beginning, but you get used to it.

The New Odyssey G6 models, the S27BG65 and the S32BG65 offer the same image quality, performance and features as the G7 models, but with built-in smart OS.

Although it’s expensive, it delivers excellent value for the money considering its image quality, performance, and features. After all, it’s intended for those who have high-end gaming setups and want to use them to their full potential.

If you’re looking for a flat-screen 1440p 240Hz gaming monitor, you’ll have to opt for an IPS model. We recommend the Gigabyte M27Q-X and the LG 32GQ850; they don’t have as high contrast ratio, but offer more consistent and vibrant colors as well as smoother VRR performance.

If you’re a fan of aggressively curved screens, the Samsung Odyssey G7 is an excellent 1440p 240Hz gaming monitor as you get a high contrast ratio and quick pixel response time speed.

However, the flat-screen IPS alternatives (the Gigabyte M27Q-X and the LG 32GQ850) are just as fast, and while they don’t have as high contrast ratio, they’re cheaper, have wider viewing angles and more stable VRR performance.

So, it all comes down to your personal preference. We don’t recommend getting the Odyssey G7 for HDR as there are better HDR displays in this price range, such as the Cooler Master Tempest GP27Q.