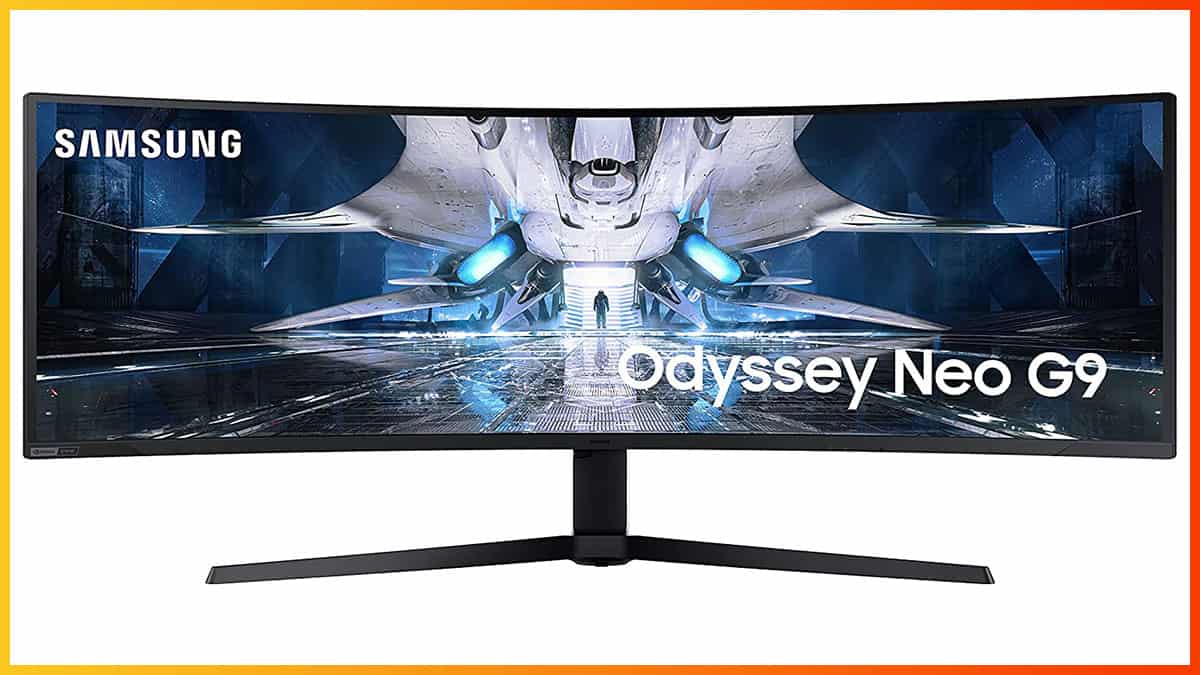 Unlike the original Odyssey G9, the Neo G9 is based on a VA panel developed by CSOT as Samsung stopped manufacturing/developing panels for LED LCDs.

However, the native performance of the panel is very similar.

What makes the Neo G9 exceptional is its mini LED backlight which allows for the stellar ~1000-nit peak brightness and 2048 individually dimmable zones – these zones can dim parts of the screen that need to be dark without affecting the image parts that should remain bright, thus effectively boosting the contrast ratio.

As a result, you get incredibly bright highlights as well as deep and inky blacks, while the wide 95% DCI-P3 gamut ensures vibrant colors.

An sRGB emulation mode is also available with adjustable brightness (but other settings are locked). Just how accurate this mode is will vary across different units though.

Of course, FALD (full-array local dimming) is not perfect. When there’s a tiny bright object in the dark, some light can bleed into the surrounding dimmed zones, creating a halo/bloom effect.

Because the Samsung S49AG95 has a high native contrast ratio and over 2000 dimming zones, the blooming is only visible in really demanding scenes (stars in space, night sky, etc.), so it’s tolerable or even negligible.

In fact, the blooming is a lot less noticeable than it’s on the more expensive ASUS PG32UQX which uses an IPS panel with a lower native contrast ratio and fewer 1152 mini LED dimming zones.

As far as LED-backlit monitors go, the Samsung Neo G9 offers the best HDR viewing experience with the least amount of blooming.

On the images of plain backgrounds (mostly white, blue or gray), you may sometimes notice the FALD grid pattern. However, it’s negligible most of the time unless you’re focusing on it. In games and videos, it’s not noticeable at all.

There are also some pixel walk/inversion visual artifacts that are characterized as visible horizontal lines when the monitor is displaying certain patterns. It varies from unit to unit, but it’s negligible in most cases as you’re not likely to encounter these patterns during regular use.

You can use local dimming with both HDR and SDR content.

There are two HDR modes: Dynamic and Standard.

The 1007.3 firmware (or newer) fixes the tone mapping issue the Dynamic mode had with earlier firmware versions, so we recommend sticking with ‘Dynamic HDR’ for the most immersive gaming experience. Some color over-saturation is present, but you can reduce it via the ‘Saturation’ setting if you find it bothersome.

Despite Samsung’s Quantum HDR 2000 advertising, the monitor can only reach 1,000-nits in real scenes. The 2,000-nits peak brightness can only be achieved in very specific and unrealistic test conditions.

This means that you get plenty of screen real estate as well as sharp details and text, without the need to use any scaling.

It’s essentially equivalent to two 27″ 2560×1440 put side by side, just without the bezels in-between them.

Keep in mind that such high resolution is quite demanding to drive (though still not as demanding as 4K UHD), so you will need a high-end PC rig to take full advantage of the monitor.

You should also make sure that your favorite games support the 32:9 super-ultrawide aspect ratio (either natively or via mods and other fixes). Otherwise, unsupported games will have black bars at the sides of the screen.

However, when you enable VRR (variable refresh rate), the overdrive settings disappear as you get a single mode that efficiently prevents ghosting without adding overshoot across the entire refresh rate range.

Another good news is that at 240Hz, the Neo G9 has noticeably less overshoot than the old Odyssey G9.

VRR is supported with a 96-240Hz range and it has both NVIDIA’s G-SYNC Compatible and AMD’s FreeSync Premium Pro certifications for smooth tear-free gameplay up to 240FPS.

Below 96FPS, LFC (Low Framerate Compensation) is triggered and adjusts the refresh rate to multiples of the frame rate (95FPS -> 190Hz, 80FPS -> 240Hz, etc.). This way, each frame is refreshed multiple times, which is invisible to the viewer, but since all frames are whole and synchronized, you won’t get any tearing.

Some VRR brightness flickering can be observed with FPS fluctuations on some units of the monitor, but you can use the ‘VRR Control’ option in the OSD menu to prevent this at a cost of introducing some micro-stuttering.

Input lag, that is, the delay between your actions and the result on the screen, is imperceptible at just ~2ms.

The OSD (On-Screen Display) menu can be accessed and easily navigated via the directional joystick placed beneath the bottom bezel of the screen.

Picture in Picture and Picture by Picture modes are supported as well, but you are limited to 120Hz and cannot use HDR, local dimming or VRR.

The backlight of the Samsung S49AG950 is flicker-free and there’s a low-blue light filter (Eye Saver Mode).

Further, at the rear of the monitor, there’s the CoreSync RGB lighting that can be synchronized with on-screen content.

The screen has a matte anti-glare coating that eliminates reflections and a steep 1000R curvature for added immersion.

Connectivity options include DisplayPort 1.4 with DSC, two HDMI 2.1 ports, a headphone jack and a dual-USB 3.0 hub.

The Samsung Odyssey Neo G9 price ranges from $1,800 to $2,500 which is reasonable considering its 2048-zone FALD mini LED backlight.

However, you should also check out the Dell AW3423DW, the LG OLED48C1, and the LG OLED42C2. They all offer better HDR image quality due to their infinite contrast ratio and lack of backlight bleeding, haloing, or other visual artifacts. Moreover, they offer an instantaneous response time speed and go for half the price.

The old Odyssey G9 is also worth considering. It goes for ~$1,300 and offers similar performance, but not nearly as good HDR image quality.

HDR content is breath-taking as the 2048-zone mini LED FALD solution allows for stellar brightness and high contrast ratio with minimal blooming or other visual artifacts.