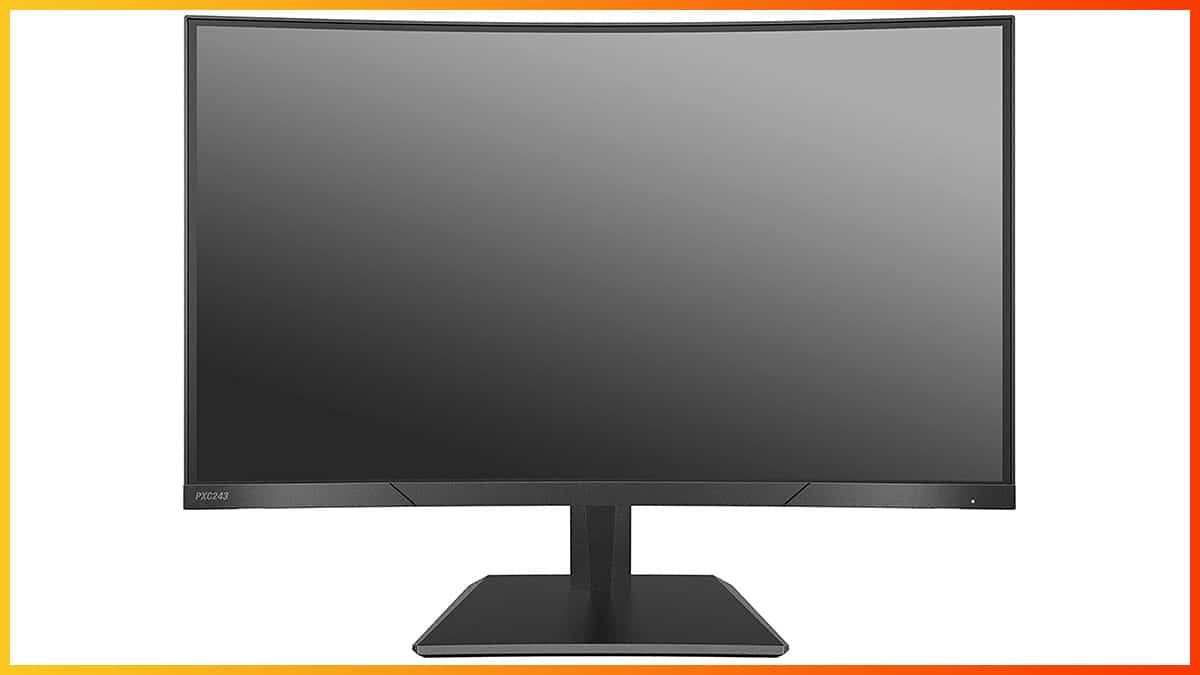 The Pixio PXC243 is an inexpensive 144Hz gaming monitor with a curved VA panel. It offers a responsive gaming experience and an immersive image quality with deep blacks, however, due to its slow pixel response time speed, it’s not particularly good for competitive first-person shooters.

The Pixio PXC243 is an affordable 144Hz gaming monitor. It has a curved VA panel with a high contrast ratio for deep blacks, but its pixel response time speed is rather slow, making it unfit for competitive fast-paced gameplay.

Based on a VA (Vertical Alignment) panel, the strongest asset of the Pixio PXC243 is the high 3,000:1 static contrast ratio.

It allows for deep and inky blacks that make the blacks of other panel types (TN and IPS) appear grayish in comparison due to their lower 1,000:1 contrast ratio.

Further, in comparison to TN panels, you get wider viewing angles, so the image won’t degrade as much when watched at an angle.

The colors aren’t as consistent as they are on IPS monitors, but you won’t get as big gamma/saturation shifts or color inversion at different angles as you get with TNs.

The Pixio PXC243 monitor supports true 8-bit color depth for 16.7 million colors and covers ~95% of the sRGB color space. The colors are accurate when viewing sRGB content, which includes most games and content in general, but some users might’ve preferred a wider color gamut for less precise, but more saturated and vivid colors.

Peak brightness amounts to 250-nits, which can make the monitor more than bright enough under normal lighting conditions.

However, if you’re in a particularly bright room with a big window next to your screen and without any blinders or curtains, you might find the monitor’s brightness to be too low to mitigate glare, so you’ll have to mind your room lighting in that case.

The Full HD resolution results in a respectable pixel density on the 23.6″ viewable screen of the Pixio PXC243. With roughly 93 PPI (pixels per inch), you get a decent amount of screen real estate and fairly sharp details and text.

The image won’t be as pixely as that of 27″ 1080p monitors. Additionally, 1080p is not too demanding to drive, allowing you to take advantage of the monitor’s 144Hz refresh rate even with a decent entry-level graphics card.

Moving on, the Pixio PXC243 has a specified response time speed of 3ms GtG (gray to gray pixel transition).

However, this refers to the fastest pixel transition possible, not the average, so it’s not really representative of how quick the response time actually is in real use.

As expected from a VA panel monitor at this price range, there is noticeable smearing behind fast-moving objects, especially in darker scenes as pixels take longer to change from dark into bright pixels.

For casual gaming, this is tolerable or even negligible if you’re not too sensitive to ghosting, but if you’re a rather competitive FPS player, you really should get a monitor with a faster response time, preferably with an IPS or TN panel.

There are only two response time overdrive modes: on and off. Make sure this option is set to ‘On’ for the best results.

Input lag, on the other hand, is great at only ~4ms of delay, which is imperceptible.

The Pixio PXC243 display supports FreeSync with a 48-144Hz variable refresh rate (VRR) range over DisplayPort for both AMD and NVIDIA GPUs, and a 48-120Hz range over HDMI for AMD GPUs only.

VRR synchronizes the monitor’s refresh rate (Hz) to your GPU’s frame rate (FPS) in order to prevent screen tearing without introducing input lag as V-Sync does. Below the VRR threshold of 48FPS, LFC (Low Framerate Compensation) is activated, which doubles the frame rate (47FPS -> 94Hz) in order to keep tearing at bay.

Alas, as it’s the case with most VA panel monitors, some units are prone to brightness flickering when your FPS (Frames Per Second) is sitting around the LFC threshold or if your frame rate fluctuates a lot. The intensity of this ‘defect’ varies across different units of monitors, and just how bad it is depends on the game.

In well-optimized games, such as Doom Eternal, you most likely won’t get any flickering at all. In some games, the brightness flickering might only be noticeable in loading screens or in-game menus, while in other games, you’ll have to disable FreeSync for playable performance.

At any rate, at 144Hz tearing becomes much less noticeable than it is at 60Hz, so you might not need to use it at all, depending on how sensitive you are to screen tearing. You can also just use V-Sync to prevent tearing and use this trick to minimize the added input latency.

For navigation through the OSD (On-Screen Display) menu, there’s a directional joystick at the rear of the monitor, which is a nice surprise as budget monitors usually just have clunky hotkeys.

There’s no Black Equalizer-type feature that would improve visibility in darker scenes, but you can do this manually by adjusting the gamma in your video game or GPU drivers settings.

Finally, note that the backlight of the monitor is flicker-free as it uses DC dimming instead of PWM (Pulse Width Modulation) to regulate brightness.

The monitor features a modern design with ultra-thin bezels, but the stand is tilt-only. You can detach it though, and easily mount the screen on a third-party stand via the 75x75mm VESA pattern.

The screen has a matte anti-glare coating that eliminates reflections without making the image too grainy. It also has an 1800R curvature, which on a 24″ sized monitor is rather subtle.

The Pixio PXC243 price amounts to ~$160, which makes it one of the cheapest 144Hz monitors available.

At this price range, we highly recommend the AOC C24G1A. Its price ranges from $145 to $210. It has a wider color gamut, a better overdrive implementation, MBR technology, a 165Hz factory-overclocked refresh rate, and a better design.

While the AOC C24G1A has a noticeably faster response time speed, some competitive gamers might still find it to be too slow, in which case, we recommend an IPS model, such as the AOC 24G2, the ViewSonic XG2405, and the ASUS VP249QGR.

Overall, the Pixio PXC243 is a decent gaming monitor for the price. However, there are many better options available at this price range too, such as the AOC C24G1A.

If you can’t find AOC’s model at its normal ~$150 price, then the Pixio PXC243 is worth considering, but in this case, we recommend investing ~$20 more for one of the above-mentioned IPS models.