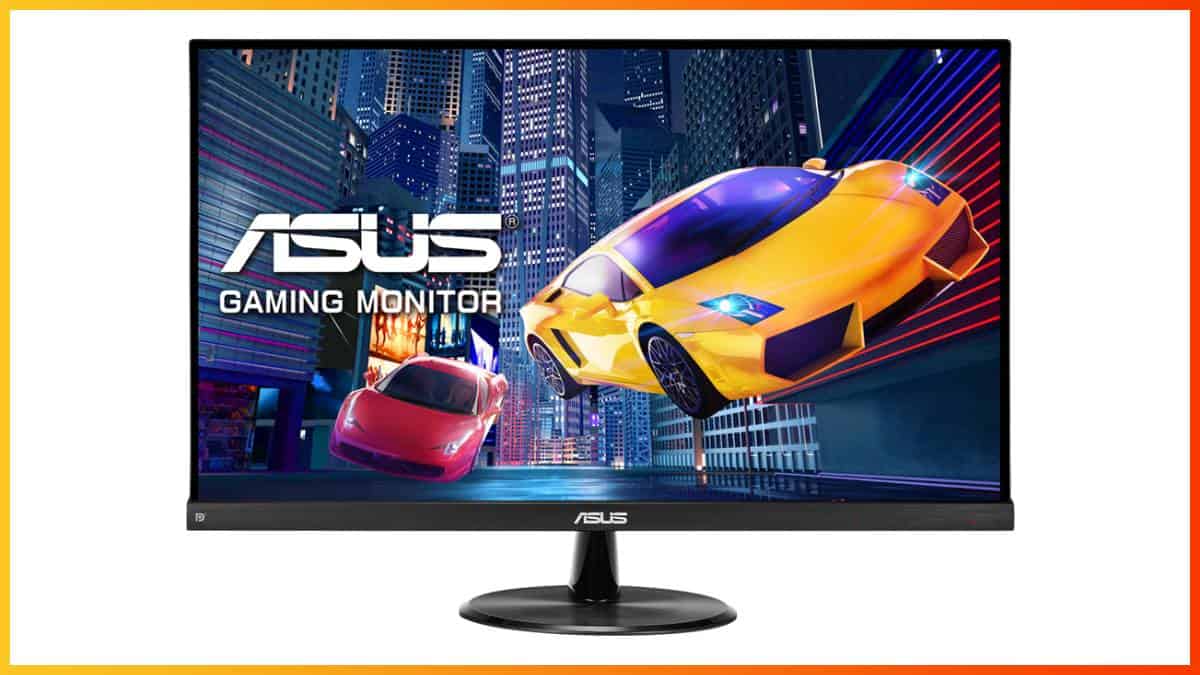 The ASUS VP249QGR is an affordable 24″ 1080p 144Hz IPS gaming monitor. It provides excellent image quality, smooth performance and many useful features for the price. There are better (though slightly more expensive) alternatives, but if you have a limited budget you won’t be disappointed by the VP249QGR.

The ASUS VP249QGR is yet another 24″ 1080p 144Hz gaming monitor based on PANDA’s IPS panel. It’s the least expensive model, but as such, it skimps on certain features such as design versatility.

Its performance and image quality, however, are on par with (or even better) certain more expensive alternatives! Overall, it’s an excellent budget gaming monitor.

These specifications are pretty standard for gaming monitors in this price range.

But wait, let us tell you something, a 250-nit peak brightness may seem low on paper, but under normal viewing conditions, the screen will be more than bright enough. In fact, you will most likely want to lower the brightness from the maximum setting.

Naturally, VA panel monitors at this price range have a higher contrast ratio (~3,000:1), so blacks won’t be as deep on the ASUS VP249QGR, but the IPS technology has other benefits including more vibrant color reproduction, wider viewing angles and usually faster pixel response time.

Additionally, the monitor has a color gamut of 72% NTSC, which is equivalent to ~99% sRGB gamut size. In other words, the colors are accurate, consistent and vivid.

Out of the box, you may want to make some picture adjustments by using this website as a reference.

Here’s the kicker: the 1080p resolution looks crisp and sharp on the 23.8″ viewable screen of the ASUS VP249QGR. You get a decent pixel density while the resolution is not too demanding, allowing you to maintain high frame rates even with entry-level gaming GPUs easily.

Lastly, the monitor has a flicker-free backlight and an integrated low-blue light filter with four different reduction levels, which can prevent headaches and eye strain caused by prolonged use of the monitor.

Input lag is the time a monitor takes to react and display your commands. The ASUS VP249QGR input lag amounts to ~4ms at 144Hz, meaning that you won’t be able to notice any delays whatsoever.

So, in fast-paced video games, you will be able to notice minor motion blur and trailing behind fast-moving objects. The amount of visible ghosting is completely tolerable, and there’s not nearly as much black smearing as there is on certain VA panel monitors.

However, there are faster IPS monitors out there, but they are more expensive.

Generally, the ASUS VP249QGR is fast enough for competitive gaming, but if you are really sensitive to motion blur and can’t afford the more expensive IPS models, you might want to consider a TN panel alternative. Keep in mind that TN panels don’t have nearly as good colors and viewing angles as IPS.

And the good news? The monitor supports AMD FreeSync over DisplayPort and HDMI with a 48-144Hz variable refresh rate (VRR) range. This technology allows the monitor to synchronize its refresh rate to GPU’s frame rates, which will remove screen tearing and stuttering with minimal input lag penalty (~1ms).

Although the ASUS VP249QGR is not certified as G-SYNC compatible by NVIDIA, VRR works without any issues when used with compatible NVIDIA GPUs (GTX 10-series or newer).

Alternatively, you can use the ELMB (Extreme Low Motion Blur) technology.

When enabled, ELMB strobes the backlight of the monitor, which reduces the perceived ghosting and provides smoother motion clarity. However, ELMB cannot be used at the same time as FreeSync.

Additionally, it will reduce the monitor’s maximum brightness while active, so use it only when playing fast-paced video games (if you prefer it over FreeSync/G-SYNC).

There are two shortcut buttons, a power button and four hotkeys at the bottom bezel on the right side of the monitor, which you can use to navigate the display’s OSD (On-Screen Display) menu.

Moreover, you will also find the standard picture adjustment tools such as brightness, contrast, color temperature as well as saturation and sharpness settings, but there are no gamma presets available.

For optimal picture quality, make sure VividPixel and ASCR options are disabled.

The Trace Free feature adjusts the monitor’s pixel response time overdrive from 0 to 100 in increments of 20. We recommend setting it to ’60’ as ’80’ and ‘100’ introduce pixel overshoot (inverse ghosting).

The ASUS VP249QGR has a tilt-only stand, but you can easily detach it and mount the screen on a third-party stand via the 100x100mm VESA pattern.

Connectivity options include HDMI 1.4, DisplayPort 1.2, VGA and an audio jack for the dual 2W integrated speakers. Both HDMI and DisplayPort inputs support 144Hz at 1080p as well as FreeSync.

With NVIDIA cards, FreeSync is only supported over DisplayPort.

The ASUS VP249QGR is also available with a fully ergonomic stand as the ASUS TUF VG249Q, though it’s considerably more expensive.

The ASUS VP249QGR is an excellent budget gaming monitor, but there are better alternatives available for the same price.