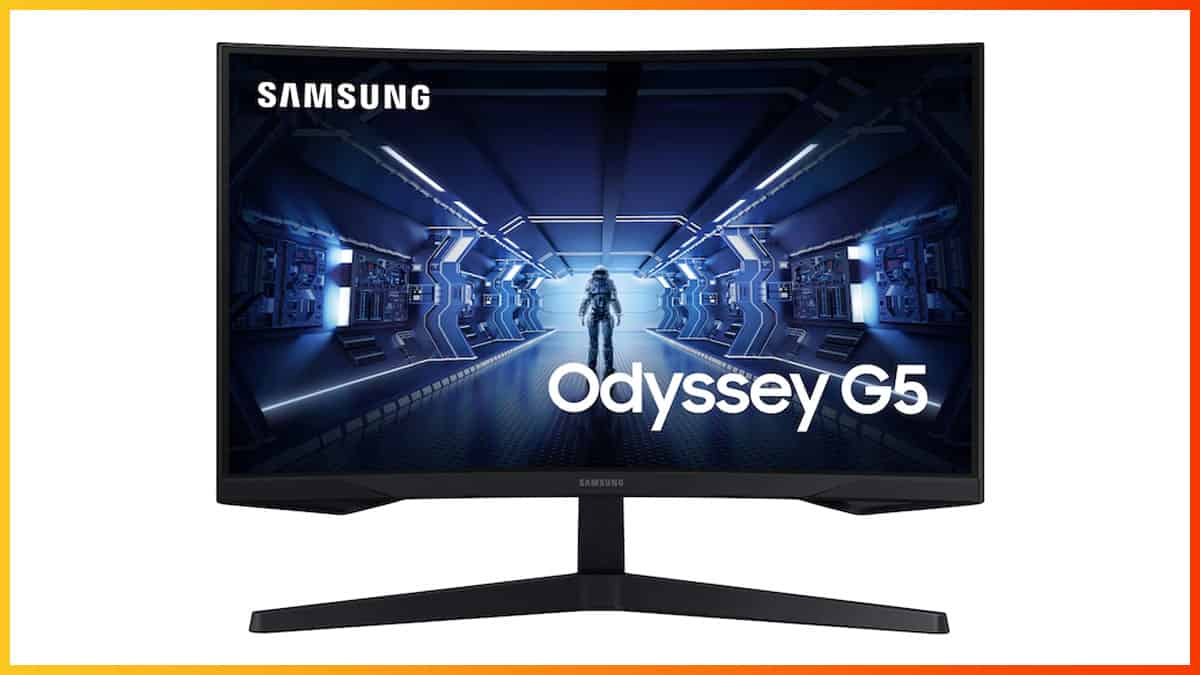 It does offer a decent viewing and gaming experience for the price, especially if you prefer the steep 1000R screen curvature.

Do you like the design and aggressive screen curvature of the G7 but can’t afford it? Then look no further, Samsung’s Odyssey G5 series is a stripped-down version of the popular Odyssey G7 line-up.

Simply put, you get the same detail clarity as you would on a 24″ 1920×1080 monitor, but on a much larger screen and with a bit more screen real estate due to the higher resolution. Further, because the screen is bigger, you can sit a bit further from it, making individual pixels less distinguishable from one another.

Moreover, another advantage of 1440p is that it’s significantly less demanding than 4K UHD, allowing you to enjoy higher frame rates with a decent gaming graphics card.

As if that’s not enough, the monitor has a high 2,500:1 static contrast ratio, which results in deep and inky blacks. On top of that, there’s no IPS glow, so you’ll be able to enjoy vivid details in shadows and dark scenes, especially if the monitor is in a dark room.

The peak brightness is minimal at only 250-nits. Under normal viewing conditions, this will be plenty, and you’ll even want to reduce the brightness down from the maximum. If your room has a lot of direct sunlight though, you will need to throw in some curtains or blinders for the optimal viewing experience.

Next, the Samsung Odyssey C32G55T supports 8-bit color depth for 16.7 million colors and it covers ~100% of the standard sRGB color space. Unlike many VA gaming monitors, there’s no wide color gamut support.

So what does that mean for you? Colors will be less vibrant and saturated, but more accurate when watching sRGB content, which includes most video games and web content. In fact, a lot of people prefer accurate sRGB color representation to over-saturated colors.

Ideally, you would have an option to choose between the two, but many wide gamut monitors don’t have a proper sRGB mode.

Lastly, HDR (High Dynamic Range) is supported, but due to the lack of local dimming, high brightness, and wide color gamut, you’re not getting a noteworthy HDR viewing experience.

The Samsung C32G55T has a very low input lag of ~4ms, so you won’t be able to notice any delays between your actions and the result on the screen.

However, its performance is not entirely spotless.

Probably the biggest letdown of the Samsung G5 is the pixel response time speed performance, as it’s not as fast as the G7. Some ghosting, especially in darker scenes, is visible behind fast-moving objects. So, we don’t recommend the Samsung C32G55T for competitive FPS players.

Even so, if you’re not sensitive to ghosting and just play fast-paced games casually, the response time speed won’t be an issue for most users.

There are three overdrive modes: Standard, Faster, and Fastest — plus the backlight strobing mode: Fastest (MBR). The standard mode doesn’t push the pixels to transition fast enough while the Fastest mode pushes them too hard, thus creating pixel overshoot.

Luckily, the Faster mode will eliminate most of ghosting without introducing overshoot. The Fastest (MBR) mode offers the clearest motion clarity, but it sacrifices picture brightness in the process, and it cannot be active at the same time as FreeSync, only at fixed 144Hz.

FreeSync is supported with a 48-144Hz variable refresh rate (VRR) range over HDMI for compatible AMD cards and over DisplayPort for both AMD and NVIDIA graphics cards. VRR synchronizes the monitor’s refresh rate with GPU’s frame rates in order to eliminate screen tearing and stuttering with imperceptible input lag penalty.

Unfortunately, as it’s the case with most VA panels, some units of the Samsung C32G55T monitors are affected by the FreeSync brightness flickering issue.

Related:What Is FreeSync Brightness Flickering And Can You Fix It?

This issue even plagues some units of the significantly more expensive G7 models, despite their official ‘G-SYNC Compatible’ certification by NVIDIA.

Now, the OSD (On-Screen Display) menu of the monitor is user-friendly and easy to work with thanks to the directional joystick placed beneath the bottom bezel of the screen.

The backlight of the monitor is flicker-free and there’s an integrated low-blue light filter (Eye Saver Mode).

Other settings in the OSD menu include the standard image adjustment tools such as brightness, contrast, sharpness, etc.

In case you’re wondering: what is G5’s key selling point? The main feature of the Samsung Odyssey G5 monitors is the steep 1000R curvature. However, while some people will absolutely love it, others might despise it. Generally, it just takes some time to get used to it.

The stand of the Samsung C32G55T monitor is sturdy and sleek, but the stand is tilt-only by -2°/18° and there’s no RGB lighting. The screen is 75x75mm VESA mount compatible though.

Connectivity options include DisplayPort 1.2, HDMI 2.0, a headphone jack and a USB port for service.

Otherwise, you can get a similar gaming monitor with a more subtle curvature for ~$320.

The Samsung C32G5 is also available as a 27″ sized model, the Samsung C27G55T, for ~$300, and the verdict is the same; there are similar but cheaper 27″ 1440p 144Hz models available, so go with the Samsung Odyssey C27G55T only if you personally find the steeper curvature worth the extra cost.

We’re really looking forward to affordable high refresh rate VA gaming monitors with fast response time. Ideally in both flat-screen and curved-form factors. Until then, the Samsung C32G5 and the Samsung C27G5 are good options for those who like the aggressively curved design, but can’t afford the high-end G7 models.