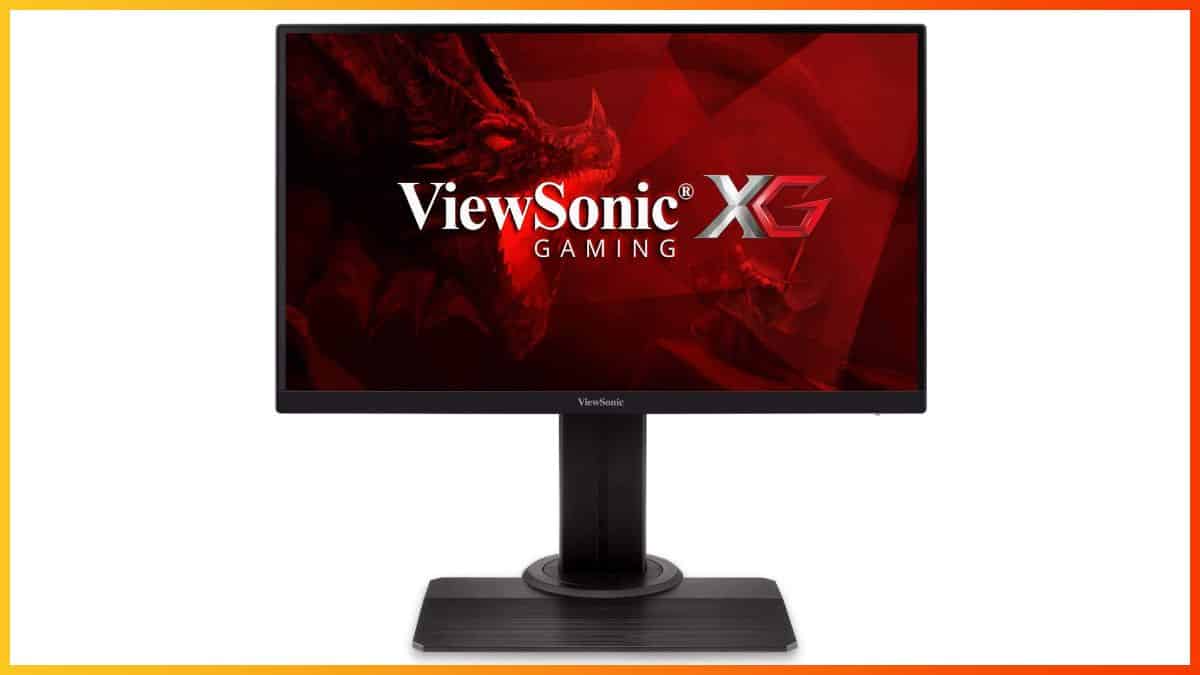 The ViewSonic XG2405 offers great image quality and performance, as well as an excellent design and plenty of additional features. However, its price could be lower.

The ViewSonic XG2405 is yet another 24″ 1080p 144Hz gaming monitor based on an IPS panel that delivers accurate colors, wide viewing angles and good response time performance at an affordable price!

If you have an entry-level graphics card, you’ll definitely want to stick with 1080p resolution for gaming in order to get the smoothest performance.

Luckily, Full HD is still considered as the standard and most widespread resolution, and it looks crisp and sharp on the 23.8″ viewable screen of the ViewSonic XG2405 monitor thanks to the decent pixel density of 93 PPI (pixels per inch).

Further, the IPS panel of the monitor ensures consistent and accurate colors regardless of the angle you’re looking at the screen thanks to the wide 178° viewing angles.

The contrast ratio of 1,000:1 is not as high as that of similarly priced VA panel monitors (3,000:1), but these displays have disadvantages of their own, such as slower pixel response time and not as consistent colors/viewing angles.

So, blacks won’t be as deep as they are on VA monitors, but they’re pretty much as black as that of any IPS panel display without the expensive high-end full-array local dimming solutions.

Next, the ViewSonic XG2405 has a peak brightness of 250-nits which is more than bright enough for normal lighting conditions. However, it might be too dim for rooms with plenty of sunlight and no blinds/curtains.

8-bit color depth is supported via dithering (6-bit + 2-bit FRC) for 16.7 million colors which is the case for all 1080p IPS monitors, and there’s no visible difference between true 8-bit and dithered 8-bit displays.

The monitor covers the basic sRGB color gamut, so colors look natural and realistic without any over-saturation.

There’s a pre-calibrated sRGB color temperature preset which is supposed to deliver the most accurate color representation for the sRGB color space.

However, the color temperature is a bit higher than the 6500K standard (~7700K), so white will have a very slight cold/blueish hue. Note that the brightness setting is not locked in the sRGB mode as it is with some displays.

Factory calibration varies across different panels, so your unit might be better in this regard.

One thing to keep in mind about IPS monitors is IPS glow which is characterized as visible ‘glowing’ around the corners of the screen. It’s mostly noticeable in dark rooms with dark content and high brightness setting, so it’s tolerable.

The amount of IPS glow varies across different units of the monitor, but in all but most extreme cases, it’s manageable.

Moving on, the ViewSonic XG2405 has very low input lag of ~4ms, so you won’t be able to feel or notice any delays between your actions and the result on the screen.

The GtG (gray to gray) response time speed of the monitor, which is the speed at which pixels can change from one shade of gray to another, is not specified by ViewSonic.

If it were, it would probably be quoted as 4ms GtG – same as with the other monitors that use this IPS panel.

Regardless, there’s only minor trailing visible behind fast-moving objects. For casual gaming, it’s really not an issue. In case you’re a hardcore FPS gamer though, you might want to look for a faster display.

There are three response time overdrive modes: Standard, Advanced, and Ultra Fast, but there’s no visible difference between them, so you can just leave it at Advanced or Ultra Fast.

The specified 1ms response time of the ViewSonic XG2405 actually refers to the MPRT measure, not GtG.

Once you enable ‘1ms Mode’, the monitor will strobe the backlight which will reduce the brightness, but also reduce the perceived ghosting for smoother motion clarity.

However, while fast-paced motion will be clearer, a double image effect can be detected as well.

For the best results, you should only use this mode in fast-paced games where you can maintain a steady FPS rate that’s equal to the refresh rate (144Hz = 144FPS, 120Hz = 120FPS, etc). Limit the FPS rate via VSync or FPS cap.

The ViewSonic XG2405 also supports AMD FreeSync, and even though it’s not officially certified by NVIDIA as G-SYNC Compatible, it works with supported GeForce cards (GTX 10-series or newer) without any issues.

FreeSync is supported over both HDMI and DisplayPort up to 144Hz for AMD cards, but only over DP for NVIDIA cards.

There are no advanced picture adjustment tools such as gamma and 6-axis hue/saturation though.

Make sure to change the monitor’s Color Space and Color Range settings to ‘Full’ and ‘RGB’ respectively, for the optimal image quality.

The ViewSonic XG2405 has a flicker-free backlight and an integrated low-blue light filter allowing you to game for hours without straining your eyes. Note that ‘1ms Mode’ introduces screen flickering.

The OSD (On-Screen Display) menu is rather user-friendly and simple to navigate using the five hotkeys at the back of the monitor, at the right side.

The design of the monitor is excellent considering the price!

The bezels at the sides and top are ultra-thin while the screen has a matte anti-glare coating which eliminates reflections, but doesn’t make the picture appear grainy.

The ViewSonic XG2405 goes for $280 at the time of this writing, which is too expensive.

It’s also available as 27″ variant, the ViewSonic XG2705 with a lower pixel density.