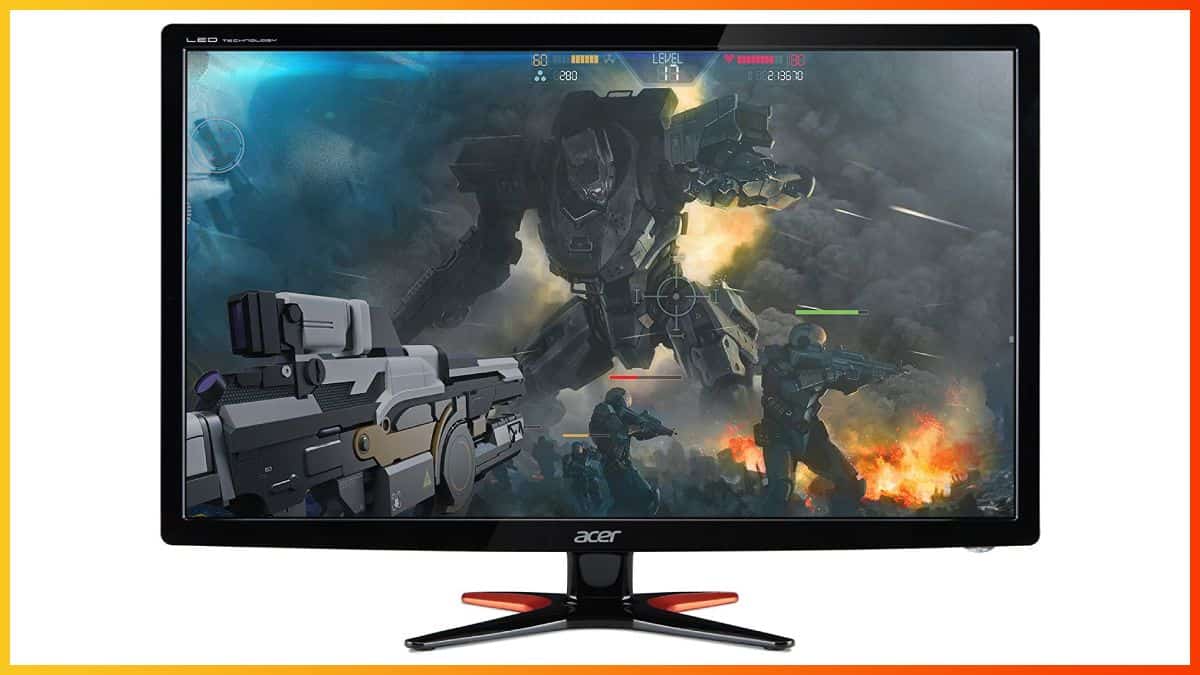 The Acer GN246HL was one of the most popular 24″ 1080p 144Hz 1ms gaming monitors. However, nowadays, you can find a lot better alternatives at the same price.

The Acer GN246HL is one of the most popular and top-rated yet cheapest 144Hz gaming monitors available.

Back in the day, its 144Hz refresh rate and 3D technology were state-of-the-art features responsible for its popularity.

So, how does it stand the test of time?

The image quality of the Acer GN246HL display is on par with most 24″ TN panel gaming monitors.

The viewing angles are 160/170 degrees, but since you’ll be using the monitor mostly for gaming, which implies sitting directly in front of the screen, this won’t be a problem for most gamers.

Moving on, the panel supports 8-bit color depth via dithering and covers a reasonable 95% of the sRGB color gamut. Overall, the picture is bright and crisp, but don’t expect particularly vibrant colors.

Moreover, if you are gaming in a dark room, blacks will appear grayish due to the poor contrast ratio.

The Full HD 1920×1080 resolution of the Acer GN246HL 24″ 144Hz monitor provides a decent pixel density so you won’t be able to individually distinguish the pixels unless you get really close to the screen.

The Acer GN246HL input lag amounts to ~10ms, which is not perfect for highly competitive gameplay.

For 144Hz, input lag should be at least lower than 6.94ms for delay to be unnoticeable. Having said that, most casual gamers won’t be able to feel any delays.

Next, the specified response time speed of 1ms (GtG) will ensure that there’s no trailing left behind moving objects in fast-paced video games or movies. Unfortunately, there’s noticeable pixel overshoot (or inverse ghosting), which cannot be alleviated as there are no overdrive settings.

Out of the box, the Acer GN246HL color calibration is required for the best picture quality. You can get a noticeable improvement in image quality by manually calibrating your screen without any extra hardware required.

Unlike most modern monitors, the Acer GN246HL is not flicker-free and lacks a low-blue light filter. So, if you are sensitive to screen flicker, you may experience headaches or eye fatigue after prolonged monitor use.

The NVIDIA 3D Vision 2 technology is outdated, but if you’re interested in a 3D gaming experience with active-shutter glasses, some older games still support this technology.

You can use LightBoost to increase the Acer GN246HL brightness for a more immersive 3D viewing experience or with some fiddling in drivers settings, you can use it for BFI (black frame insertion).

The BFI method, also referred to as backlight strobing, further decreases motion blur by adding black frames between the regular GPU-generated frames. It can only operate at 100Hz or 120Hz.

Keep in mind that using this method decreases monitor’s maximum brightness and contrast ratio, and increases its input lag to a bit over 16ms which is too high for professional gaming, but unnoticeable to most casual gamers.

Connectivity consists of VGA, HDMI, and Dual-Link DVI. Only the DVI port supports 1080p up to 144Hz, whereas the HDMI port is limited to 60Hz even though it theoretically has enough bandwidth for 144Hz.

The X-shaped stand is sturdy and can easily be removed if you wish to wall mount the Acer GN246HL monitor via the 100x100mm VESA pattern. Alas, the screen is tilt-only by -5/15 degrees.

The price for the Acer GN246HL gaming monitor is around $200.

All in all, the Acer GN246HL didn’t age well and its current price is way too high. Unless you can find it for less than $150, there are better alternatives available.