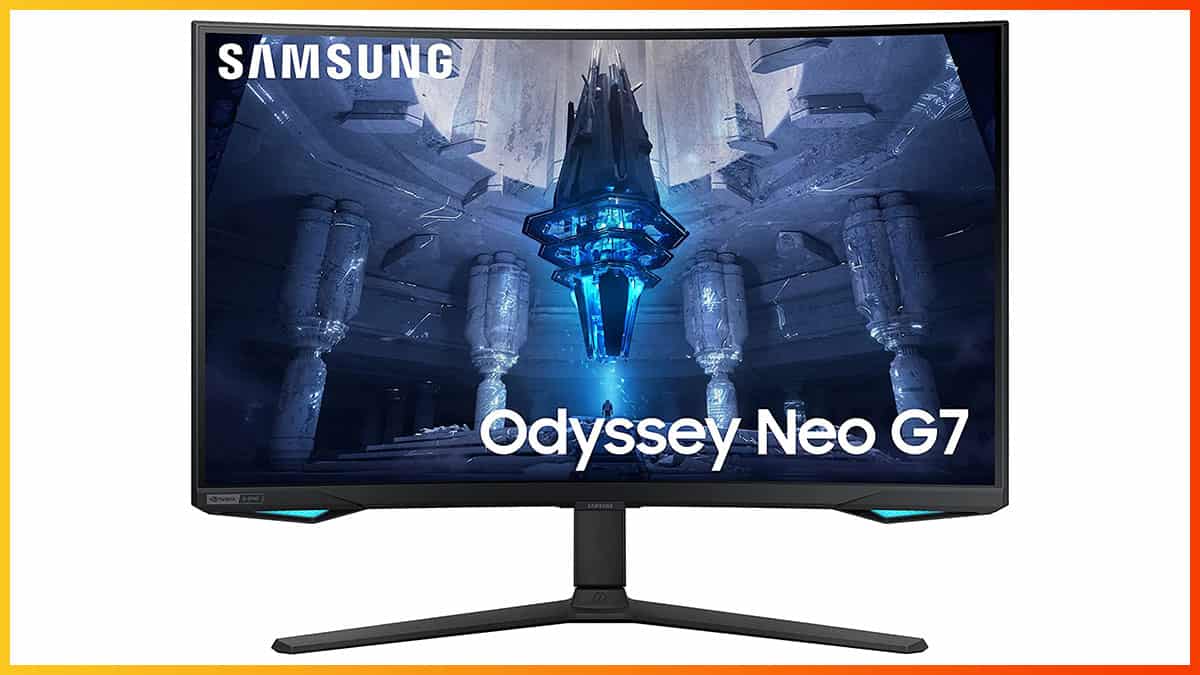 If you don’t mind the steep 1000R screen curvature, the Samsung Odyssey Neo G7 is the best 4K HDR gaming monitor you can get for the money.

Ever since the release of the Dell Alienware AW3423DW OLED gaming monitor at $1,300, mini LED displays had to drastically drop in price in order to stay competitive.

The Samsung S32BG75 (Odyssey Neo G7) seemed the most promising mini LED alternative at reasonable pricing ever since its announcement, so let’s see how it stacks up!

Based on a curved VA panel by CSOT with a rapid 1ms GtG pixel response time speed and a high 4,000:1 static contrast ratio, the Samsung Neo G7 already delivers an exceptional performance with both – deep blacks and smooth motion clarity!

Additionally, the monitor has a wide color gamut covering around 95% of the DCI-P3 color space for vibrant and saturated colors. There’s also an sRGB emulation mode available in case you prefer more accurate and natural colors for SDR content.

Its 4K UHD resolution perfectly suits the 32″ viewable screen as you get a high pixel density of 138 PPI (pixels per inch), resulting in plenty of screen real estate with sharp text and details. Some users prefer to use 125%-150% scaling here, while others find the native image usable too.

The factory calibration is not good enough for color-critical work, so you’ll need a colorimeter for proper image accuracy. Due to the gamma/contrast shifts on VA panels, the Neo G7 isn’t ideal for professional photo/video editing anyway, but you can do some basic content creation.

The main reason to get the Samsung Odyssey Neo G7 monitor is for its HDR support due to the 1196-zone full-array local dimming (FALD) mini LED backlight.

The screen gets a boost in peak brightness from the standard 350-nits for a 100% white window to a bit over 1,200-nits for smaller 10% highlights, all the while dark elements remain inky black thanks to the 1196 dimming zones spread across the entire panel.

In particularly demanding scenes (night sky stars, fireworks, etc.), the light that illuminates small bright objects will bleed into the surrounding dimmed zones and create some blooming (or the halo effect). This is expected from this technology, and the Neo G7 has the least amount of blooming compared to the other mini LED displays currently available, mainly thanks to its high native contrast ratio.

In order to completely eliminate blooming, you’d need an OLED panel display. A 4K OLED monitor, for instance, essentially has 8,294,400 dimming zones since each pixel can be individually turned off. However, OLEDs have other drawbacks: they’re not as bright, they have the risk of burn-in and they’re only available in a few screen size/resolution combinations.

We’d like to clarify that Samsung’s specified 2,000-nit peak brightness and the ‘Quantum HDR 2000’ certification refers to unrealistic testing conditions and should be ignored. Luckily, the actual 1,200-nit peak brightness is sufficient for punchy highlights. The screen also has a very low minimum brightness of just ~15-nits.

Samsung previous-gen G7, G9 and Neo G9 240Hz curved VA monitors are susceptible to visible horizontal scanlines. These lines would appear when certain patterns are shown on the screen. In case your unit has this issue (not every unit is affected), the ‘fix’ is to reduce the refresh rate to ~200Hz, or lower in some cases.

Due to its lower 165Hz native refresh rate, the Neo G7 isn’t affected by this, at least we haven’t seen any concrete reports of it – unlike it’s the case with the 240Hz Neo G8 variant.

When the variable refresh rate is enabled (Adaptive-Sync, FreeSync Premium Pro, G-SYNC Compatible or HDMI 2.1 VRR), overdrive settings are locked to a mode optimized for VRR performance with no ghosting at high refresh rates nor prominent overshoot at low refresh rates.

Some units might be affected by the VRR brightness flickering issue with frequent frame rate fluctuations, especially around the LFC threshold or in in-game menus/loading screens.

In case your unit has brightness flickering, you can enable the VRR Control option in the OSD (On-Screen Display) menu. This will prevent flickering, but can introduce micro-stuttering in some cases as well as increased input lag.

Input lag amounts to around 4ms, so you won’t be able to notice or feel any delays between your actions and the result on the screen.

Local dimming increases input lag to ~10ms, which most gamers (excluding professional players) will find imperceptible as well. Competitive titles don’t really focus on image quality, so you can just disable local dimming in those games.

Beneath the bottom bezel of the screen, there’s a directional joystick for quick and easy navigation through the OSD menu.

Some advanced image adjustment tools are available as well, such as gamma, sharpness and saturation in addition to the standard settings (brightness, contrast, color temperature, aspect ratio, etc.).

Other noteworthy features include Picture in Picture, Adaptive Picture (which uses the integrated sensor to adjust brightness according to ambient lighting), Auto Source Switch and CoreSync RGB lighting at the rear of the monitor.

There’s also the UltraWide Game View that changes the aspect ratio to 21:9 with black bars at the top and bottom of the screen for a wider field of view, but you can’t use VRR when it’s enabled; the workaround is to manually create a custom resolution.

The backlight of the monitor is flicker-free at high brightness levels (unless MBR is enabled) and there’s an integrated low-blue light filter (Eye Saver Mode). If the screen’s brightness is below ’10’ with local dimming disabled, the screen will use PWM (Pulse-Width Modulation) to regulate brightness, but at a high ~1000Hz frequency that won’t bother most users.

With local dimming enabled, PWM is used at a brightness level of ’19’ or below with a lower frequency of 165Hz – 240Hz, which might bother users sensitive to flickering. So, make sure to leave brightness above those levels if you’re worried about flicker.

The stand of the monitor is a bit wobbly, so we recommend getting a decent wall or desk clamp instead to easily mount the screen via the 100x100mm VESA pattern.

Further, the screen has an aggressive 1000R screen curvature. Some users love it, some can get used to it, but some users don’t like it at all – so, it will depend on your personal preference, but keep in mind it will take some time to get used to.

Connectivity options include DisplayPort 1.4 with DSC (Display Stream Compression), two HDMI 2.1 ports with 40 Gbps and DSC, a headphone jack and a dual-USB 3.0 hub.

The Samsung Odyssey Neo G7 price ranges from $1,100 to $1,300, which is a reasonable price considering its specifications.

The Odyssey Neo G8 goes for $1,300 – $1,500. It has a higher 240Hz refresh rate, but it’s more prone to VRR and scanline issues (possibly due to heavier DSC compression). Considering how demanding 4K UHD is to drive, we find that the 165Hz refresh rate of the Neo G7 will suit most gamers perfectly anyway.

In comparison, the ASUS PG32UQX with a flat-screen IPS panel goes for ~$2,500 – $3,000 yet it has a slower response time speed, a lower contrast ratio and more blooming visual artifacts.

The main alternative is the Dell Alienware AW3423DW with a QD-OLED panel. It has a wider color gamut, deeper blacks, even faster response time, wider viewing angles and zero blooming, however, it’s not as bright, has a lower 3440×1440 resolution and peculiar subpixel layout and screen coating.

Overall, the AW3423DW offers a better HDR image quality in a dark room (a room with controlled lighting), while the Neo G7 is more suited for brighter rooms as it’s better at mitigating glare.

While the AW3423DW also has a curved screen, it’s a lot less aggressive (1800R) and it actually suits the ultrawide panel well for added immersion.

All in all, the Samsung Neo G7 delivers an amazing HDR viewing experience at a reasonable price. It has the best mini LED FALD implementation so far.

Additionally, it has a rapid 1ms GtG response time speed with good overdrive tuning. VRR performance and scanlines can vary from unit to unit, but we haven’t seen any reports of major issues (unlike with the Neo G8 model).

If you don’t like the ultrawide format of the AW3423DW or its subpixel layout and screen coating, the Neo G7 is our recommendation for HDR gaming, as long as you don’t mind the aggressive 1000R screen curvature.