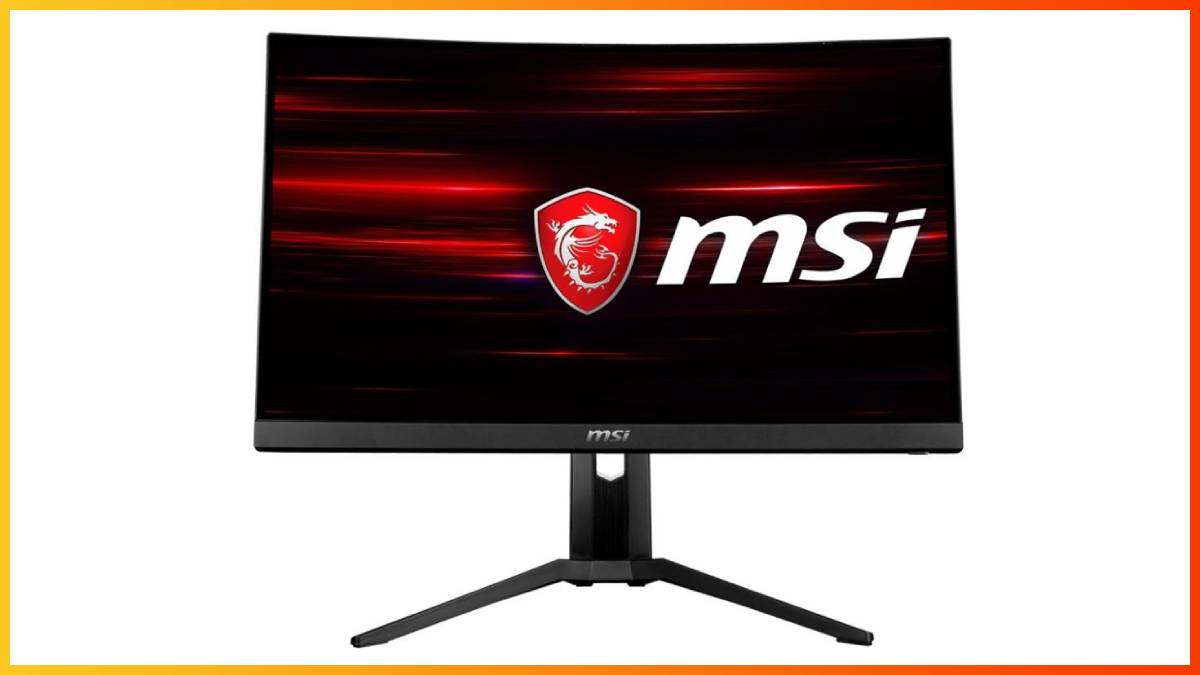 The MSI Optix MAG241C offers an enjoyable gaming performance thanks to its high refresh rate, low input lag, and a quick 1ms MPRT speed. At the same time, it delivers an outstanding image quality with punchy colors, high contrast, and a curved display.

Want an affordable 1080p 144Hz gaming monitor that doesn’t have a TN panel with poor viewing angles and color quality or an IPS panel with low contrast and IPS glow?

The MSI Optix MAG241C is a 24″ curved display with a VA panel boasting a higher contrast ratio, AMD FreeSync, and the 1ms MPRT technology.

Furthermore, it has a modern slim design, a lot of exclusive features, and it’s fairly priced!

The MSI MAG241C is based on a VA (Vertical Alignment) panel, which boasts a higher contrast ratio than other panel types (IPS and TN). The contrast ratio is responsible for the relation between the darkest and the brightest shades.

With a 3,000:1 static contrast ratio, the MSI monitor delivers deeper blacks than IPS and TN monitors with a usual contrast ratio of 1,000:1. This also makes details in shadows more vivid.

While the colors aren’t as accurate and consistent as that of IPS panels, they are vibrant and rich nonetheless, which in addition to the high contrast, makes for an immersive and captivating picture quality in games and movies.

Since the MSI Optix MAG241C screen is only 24″ in size, 1080p resolution provides a decent pixel density of 93.34 PPI (Pixels Per Inch), which is enough to make pixels individually indistinguishable when looking at the monitor from a normal viewing distance.

Moreover, Full HD resolution is still considered as the standard, and it will make reaching high frame rates much easier on your PC than 1440p.

Response time speed is the Achilles’ heel of most VA panel monitors.

Because the panel produces such deep blacks, it takes longer for the pixels to change into lighter shades. So, when the picture is mostly dark, there will be prominent smearing and ghosting of fast-moving objects.

Now, this is entirely tolerable for some gamers, but competitive FPS players may find it too distracting, which is the main reason why they go for faster gaming monitors instead.

The MSI Optix MAG241C, however, has a solution for this called the 1ms MPRT (Moving Picture Response Time) technology.

Using the backlight strobing method where a black frame is inserted between each actual frame, the monitor can notably lower the perceived motion blur.

This technology has its downsides, though. The screen becomes less bright without the ability to alter the brightness level, and what’s more, backlight strobing cannot work at the same time as variable refresh rate/AMD FreeSync.

There’s no excessive backlight bleeding nor any dead pixels; the wide 178-degree viewing angles ensure no color and contrast shifts when looking at the monitor from skewed angles, and the MSI Optix MAG241C input lag amounts to less than 5ms which is fit for hardcore gaming.

You can game for hours without worrying about your eyes as the monitor has a flicker-free screen and a built-in low blue light filter.

If you enjoy fast-paced competitive games, a 144Hz refresh rate is a must-have. Besides making the gameplay more immersive and enjoyable, it gives you a slight edge over your opponents with regular screens as your picture refreshes more than twice as fast.

If you have a FreeSync-compatible graphics card by AMD, you can make the monitor’s refresh rate change dynamically, according to GPU’s frame rates, which will eliminate screen tearing and stuttering.

The MSI Optix MAG241C FreeSync range is 48-144Hz/FPS (Frames Per Second). But, even when your FPS dips below 48, LFC (Low Framerate Compensation) technology will increase (multiply) the display’s refresh rate (at 47FPS, you get 141Hz) to maintain smoother performance.

As already mentioned, FreeSync and 1ms MPRT cannot work at the same time.

This only affects some units of the monitor, and the brightness flickering is mostly present below 48FPS and/or when your FPS fluctuates a lot.

The OSD (On-Screen Display) is very user-friendly, and it has plenty of useful settings.

You can tweak the settings via the OSD joystick placed at the back of the monitor or via a desktop application using your keyboard and mouse.

You can even adjust some settings using an Android MSI Optix software.

In the OSD menu, you will find FPS, RTS, RPG, Racing, and one customizable picture preset under the Game Mode settings. Next, there’s the Black Tuner feature, which increases visibility in dark areas in video games.

Under the Response Time settings, there are three modes, including Normal, Fast, and Fastest. Setting it to ‘Fastest’ automatically enables Anti Motion Blur, which is the 1ms MPRT technology.

While not in the OSD menu, the joystick can be used as a hotkey for certain shortcuts: ‘up’ opens the Game Menu settings, ‘down’ provides you with six different crosshairs, ‘left’ allows you to set an alarm clock, and ‘right’ changes the input source.

Other features include the standard settings such as brightness, contrast, and sharpness as well as an Eye Saver mode, 4:3/16:9 aspect ratio selection, and RGB color settings.

While the MSI MAG241C has saturated colors covering 115% of the sRGB space, which makes the colors more vibrant and lifelike, it lacks an sRGB picture profile, which would limit the color reproduction to 100% sRGB. This may be a problem for those who require accurate color representation for graphic design and other color-critical tasks.

The design is clearly gamer-inspired but not over the top. The bezels are very thin, which along with the aggressive 1500R curvature, makes the MSI Optix MAG241C 144Hz gaming monitor ideal for a multi-display setup.

Alas, the stand is tilt-only, but it’s VESA mount compatible for third-party monitor stands. There’s also a hanger for the headphones and an anti-glare screen coating.

We recommend checking out the AOC C24G1A which is based on the same panel. It has a more ergonomic design and a 165Hz factory-overclocked refresh rate yet it can be found for as low as $145.

You can also get a good 24″ 1080p 144Hz gaming monitors with an IPS panel at this price range, such as the ViewSonic XG2405 or the AOC 24G2. These models don’t have as high contrast, but they have more consistent colors and faster response time.

If you don’t care much about image quality and just want the best performance in competitive FPS games, check out the AOC G2590FX.

The MAG241C is also available as a 27″ model, the MSI MAG271C. We don’t recommend getting 27″ 1080p monitors due to low pixel density. You pay more, yet you get a less clear image quality.

There are numerous variants of the MAG241C available, all of which we’ll break down in the table below. Only the specifications that are different are included.

While the Optix MAG241C is an excellent gaming monitor, MSI will have to lower its price in order for it to be even considered as an alternative to the AOC C24G1A and the mentioned 144Hz IPS-panel models.