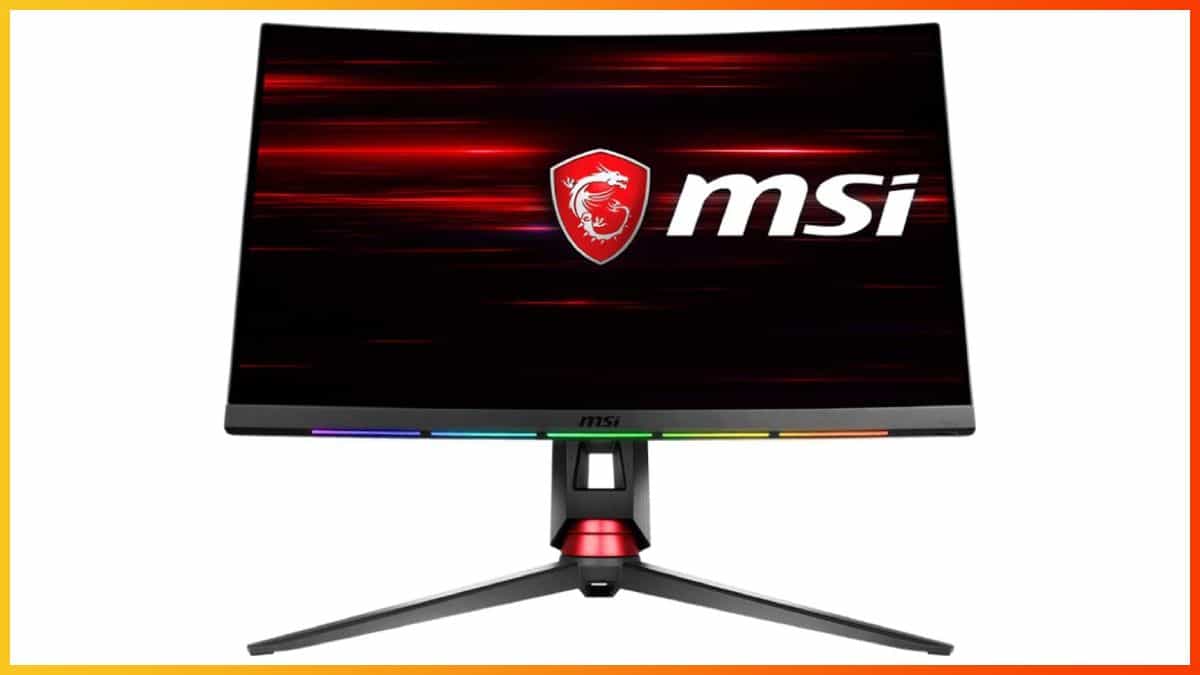 The MSI Optix MPG27CQ is one of the most interesting 27″ 1440p 144Hz gaming monitors out there. It’s got plenty of exclusive features including innovative RGB lighting, AMD FreeSync, and 1ms MPRT. Moreover, it’s got a versatile design and extensive connectivity.

Have you decided on a 1440p 144Hz gaming monitor, but you’re not sure which one to pick?

Well, the MSI Optix MPG27CQ is undoubtedly a model you should consider.

It’s a 27″ curved monitor with AMD FreeSync, 1ms MPRT, and a VA panel with high contrast and wide color gamut.

And if you like RGB lighting, you’re in for a treat.

With such a high pixel count, you can enjoy plenty of screen space as well as maximum detail without any scaling necessary; shortly, it’s the ideal screen space/detail clarity ratio.

Moving on, the monitor is based on a VA panel with true 8-bit color depth and covers 115% of the sRGB color space.

In addition to its superior contrast ratio of 3,000:1, a decent 400-nit peak brightness, and the 1440p resolution, you get an immersive picture quality with rich colors, deep blacks, and vivid details.

So, some tiny changes in contrast are expected if you’re looking at the screen from the sides, though it only becomes bothersome at extreme angles.

Overall, the display runs perfectly smooth. We didn’t find any dead pixels nor prominent backlight bleeding; the screen is also flicker-free and has an integrated low blue light filter.

The MSI Optix MPG27CQ input lag is only ~4ms, which will ensure that there’s no noticeable delay (even by professional gamers) between your keyboard/mouse actions and the display’s reaction to them on the screen.

Ghosting and motion blur is usually associated with VA panels, but the MSI Optix MPG27CQ can handle it quite well via its 1ms MPRT (Moving Picture Response Time) technology.

Once you turn on the ‘Anti Motion Blur’ feature, the monitor enables backlight strobing, which reduces ghosting and trailing of fast-moving objects.

Keep in mind, however, that when this feature is enabled, you can’t adjust screen brightness nor use AMD FreeSync – into which we’ll get later.

So, unless you are playing fast-paced games, leave this feature turned off.

To access the OSD (On-Screen Display), you can use the joystick placed at the rear of the monitor. Alternatively, you can use MSI’s desktop application or even an Android application on your smartphone called ‘MSI Remote Display App’.

The OSD menu is very user-friendly and straightforward, with numerous features available.

While not in the menu, you can flick the joystick upwards to enter the Game Mode presets, which include Racing, FPS, RTS, RPG, and User [Default].

Pressing it downwards opens up ‘Screen Assistance,’ which consists of customizable crosshair overlays.

If you press the joystick to the left, you can set an alarm clock while pressing it to the right allows you to change the input source.

Other gaming features include ‘Black Tuner’ for better visibility in darker games, ‘Zero Latency’ for lower input lag, and ‘Refresh Rate,’ which allow you to place an on-screen FPS (Frames Per Second) counter.

Setting it to ‘Fast’ barely increases the response time speed as ghosting is clearly visible.

For the best results in fast-paced games, you will need to use Anti Motion Blur.

FreeSync synchronizes the monitor’s refresh rate with the GPU’s frame rate and, consequently, removes all screen tearing and stuttering within the dynamic refresh rate range.

However, some units are affected by the brightness flickering issue when FreeSync/G-SYNC is enabled.

This only affects some units of the monitor, and the brightness flickering is mostly present below 48FPS and/or when your FPS fluctuates a lot.

Sadly, this problem affects a lot of monitors based on Samsung’s VA panels, and, hopefully, a GPU driver update will fix it at some point.

Unlike most monitors with RGB lighting, SteelSeries’ GameSense RGB lighting of the MSI Optix MPG27CQ enhances your gameplay experience with more than just glowing colors.

In compatible games, it allows you to assign the five RGB panels at the bottom bezel to depict your HP, ammo, cooldowns, killing blows, and similar values.

If your favorite games don’t support the SteelSeries Engine, you will still be able to synchronize the RGB LEDs to the rest of your MSI compatible gear and to customize the lighting at the front and at the back of the monitor.

Unfortunately, there aren’t many games that support it, but this will hopefully change in time. Supported popular games include CS: GO and DotA 2. 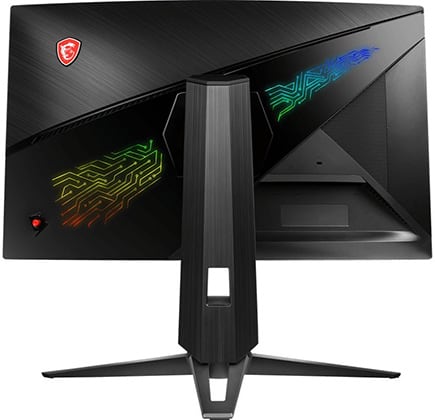 The MSI Optix MPG27CQ 144Hz gaming monitor has a 1800R curvature, which isn’t particularly noticeable on a 27″ screen, but it does add to the viewing immersion.

For 2560×1440 at 144Hz and FreeSync, you can use all three display connectors. The monitor also has an anti-glare coating and ultra-thin bezels, ideal for multi-monitor gaming setups.

The MSI Optix MPG27CQ price is ~$450, which is expensive, mainly due to its exclusive features.

For just ~$250, you can get a very similar 1440p 144Hz curved VA-panel gaming monitor, the AOC CQ27G2, with similar image quality and performance, but without as high brightness or premium features such as RGB lighting.

The MSI Optix MPG27CQ is definitely one of the more interesting 27″ 1440p 144Hz gaming models. You’re going to absolutely love it, or you won’t be interested in it at all.

Image quality and performance are superb. Thanks to its wide color gamut, high contrast, and a curved screen, the monitor provides an immersive and enjoyable viewing experience.

Moreover, the MSI MPG27CQ handles motion blur well for a VA panel, it has extensive connectivity options, a gorgeous design, and plenty of cool exclusive features.