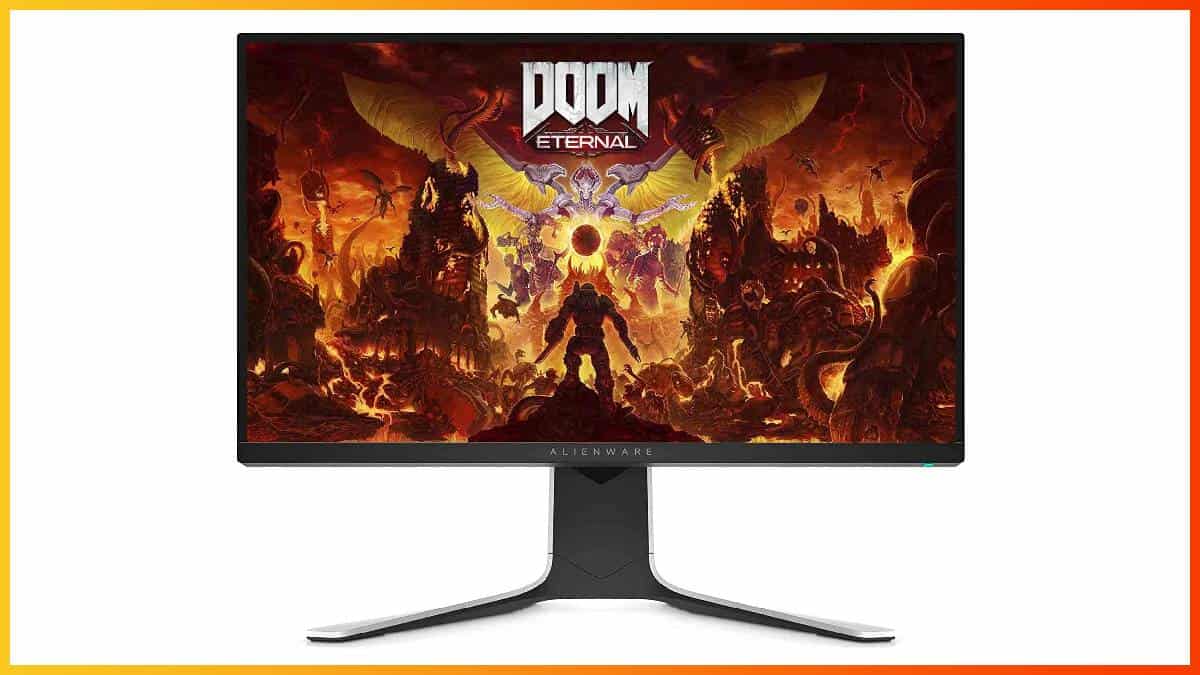 The Dell AW2720HF is a very good 240Hz monitor with an IPS panel and 1080p resolution. In addition to its quick response time, low input lag, and FreeSync support, it’s a real treat for competitive gamers. However, its low pixel density might repulse some users.

The Dell Alienware AW2720HF is a 240Hz gaming monitor intended for competitive gaming, yet it uses an IPS panel with a bit slower response time than that of the competing TN models.

However, its IPS panel also provides wider viewing angles and much better colors than any TN monitor.

Continue reading to find out which trade-off is more suited for you.

It has the standard 99% sRGB color gamut, which is currently the most widespread color space for video games and web content.

As expected from an IPS panel, the colors on the Dell AW2720HF are precise, consistent, and vivid, making the image quality of competing TN models appear washed out in comparison.

Alas, the monitor’s 1080p resolution is fairly low for its 27″ sized screen as it results in a pixel per inch (PPI) ratio of 82. So, to some users, the picture might appear too pixelated.

To reduce this effect, you can simply place the monitor a bit further away from you as the pixels will be less distinguishable from one another at a further viewing distance.

Alternatively, you can apply anti-aliasing in video games, which will make the pixelated elements even sharper.

An upside to this is that 1080p is not very demanding on your CPU/GPU, allowing you to reach higher frame rates more easily.

Right off the bat, the Dell AW2720HF offers impressive performance with input lag of just ~2ms, which is invisible at 240Hz.

Now, Dell specifies a response time speed of 1ms (GtG) for the AW2720HF. In order to get that measure, you need to use the ‘Extreme’ overdrive option.

You’re not actually expected to use this option as it introduces a lot of pixel overshoot.

In other words, this overdrive setting is too aggressive for real use, Dell created it to be able to advertise ‘1ms GtG’ – but this is what all monitor manufacturers do.

Luckily, the ‘Super Fast’ overdrive option works like a charm. There isn’t any overshoot while motion blur and trailing behind fast-moving objects is effectively removed as well.

Technically, the Dell AW2720HF is a bit slower than a super-fast TN model, such as the Acer XF252Q, but that’s barely noticeable in real use.

Some black to white pixel transitions may not make it in time on the AW2720HF at 240Hz, so some amount of ghosting would be noticeable in certain scenarios.

However, this occurs only in rare cases, and it’s not something you’d likely notice unless you’re really searching for it.

There is one more overdrive option labeled as ‘Fast,’ which should be used if you’re gaming at 60FPS.

It’s also certified by NVIDIA as G-SYNC compatible, allowing you to use FreeSync with compatible NVIDIA cards without any issues.

The official G-SYNC compatibility for the AW2720HF was added with the 441.08 drivers, so make sure you have at least that version (or newer) of the drivers installed for the best performance.

As it’s the case with all IPS monitors, some IPS glow is visible, but it’s manageable.

The backlight of the monitor is flicker-free, and there’s a low-blue light filter, so you can game for hours without worrying about headaches or eye strain.

For the OSD (On-Screen Display) menu navigation, there is a joystick at the back of the monitor as well as four additional hotkeys for shortcuts while the power button is located beneath the bottom bezel.

Game Enhanced Mode features an on-screen timer and FPS counter, but there are no crosshairs.

Other features include the standard picture adjustment tools such as contrast, brightness, RGB, sharpness, and hue/saturation; however, there aren’t any gamma presets available.

Lastly, the monitor boasts AlienFX RGB lighting technology; LEDs are placed at the back of the monitor’s stand and logo (shining in cyan in the image below).

Connectivity options are abundant and include DisplayPort 1.2, two HDMI 2.0 ports, a headphones jack, an audio line-out port for external speakers, and a quad-USB 3.0 hub.

We highly recommend the ViewSonic XG2431 instead, which goes for ~$330. It’s based on a smaller panel, resulting in a higher pixel density and sharper details. Moreover, it has an exceptional MBR implementation for CRT-like motion clarity.

All in all, the Dell Alienware AW2720HF is a solid gaming monitor, but there are better alternatives at this price range.