The LG 34UC89G offers an immersive gaming experience thanks to its big curved screen and vibrant colors of the IPS panel. Moreover, it ensures a flawless performance with G-SYNC, low input lag, quick response time, and up to 166Hz refresh rate. Its low resolution, however, makes this monitor mainly suited for just gaming.

The LG 34UC89G delivers both an immersive and responsive gaming experience thanks to its big 34″ curved screen and vibrant colors as well as the rapid 166Hz overclockable refresh rate, a quick 5ms response time, and NVIDIA G-SYNC.

However, due to its low resolution for the screen size, it’s not as good for content creation or any other work where you need to read or type a lot.

Based on an IPS panel with true 8-bit color depth and over 99.9% of the sRGB color gamut, the LG 34UC89G-B ensures vibrant, precise, and consistent colors.

Furthermore, the image won’t shift in brightness, contrast, or color when it’s viewed from the sides or below/above due to the 178-degree wide viewing angles.

Other specifications of the LG 34UC89G IPS ultrawide monitor include a 300-nit peak brightness and a 1,000:1 static contrast ratio which is standard.

The screen won’t get as bright as certain HDR displays and the blacks won’t be as deep as on VA panels, but the monitor has other features to make up for it – mainly G-SYNC and 166Hz.

As we’ve said, we don’t recommend the LG 34UC89G for any other use but gaming, web-surfing, watching movies, and other casual activities.

This makes for little screen real estate and smudgy details of small items such as text which is not noticeable in video games and movies, but it’s bothersome if you intend on using the monitor for work as well.

The LG 34UC89G input lag is around 14ms which is very good meaning that even professional gamers won’t notice any delay.

In addition, the response time speed of 5ms efficiently removes ghosting and trailing artifacts of fast-moving objects in games.

You can overclock the native 144Hz refresh rate up to 166Hz, but even at 144Hz, motion-clarity is stunning and ensures a more enjoyable fast-paced gameplay.

Finally, the NVIDIA G-SYNC technology removes all screen tearing and stuttering if you have an NVIDIA GeForce graphics card GTX 650 Ti or newer.

You can also use the monitor with AMD cards, but not the variable refresh rate technology; and since G-SYNC adds to the price, you should get the FreeSync version of the monitor, the LG 34UC79G, which is also cheaper.

The 21:9 ultrawide aspect ratio provides you with a wider field of view which, besides offering more immersive gameplay, can also be a big advantage in competitive games as you can spot the enemies from the sides more quickly.

Some competitive games, force the 16:9 aspect ratio on ultrawide monitors precisely for that reason leaving you with black bars at the sides of the screen or with a stretched picture. Check what games support the 21:9 format. 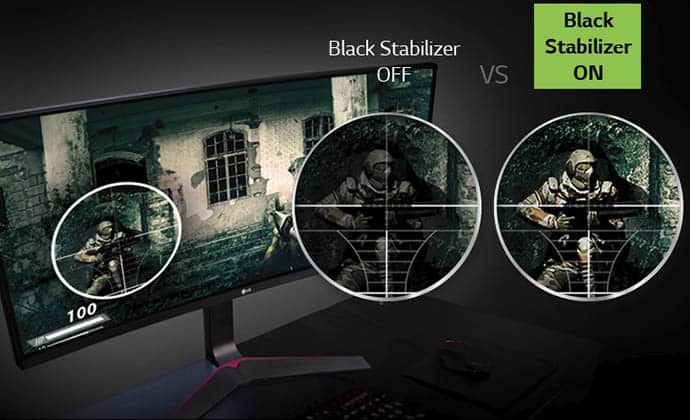 You can also place a customizable crosshair on the screen to increase your precision in first-person shooters.

Next, the Black Stabilizer feature brightens up the dark parts of the image which can reveal objectives or players luring in the dark.

Note that the monitor does not have the NVIDIA ULMB (Ultra Low Motion Blur) technology which is sometimes paired with G-SYNC. 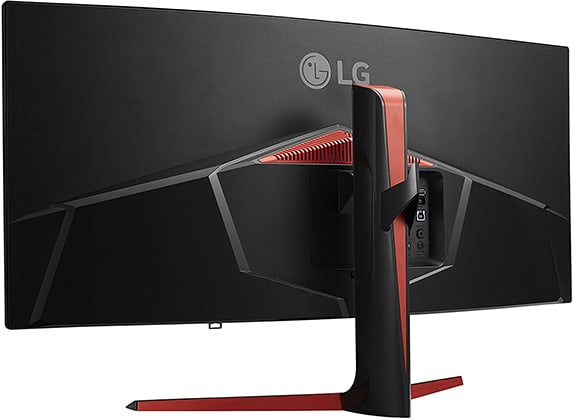 The LG 34UC89G G-SYNC gaming monitor has a versatile design with up to 120mm height adjustment, -5°/20° screen tilt, and 100 x 100mm VESA mount compatibility though there’s no swivel option.

If you’re looking for a monitor that delivers both an immersive picture quality and responsive gameplay, the LG 34UC89G is for you.

In case you are willing to sacrifice a bit gameplay fluidity for a higher resolution, check out the Dell AW3418DW.

If it had a higher resolution, the image would be notably better, but it would also make it more demanding on your PC system which would result in less fluid gameplay.

So, if you want to take competitive and fast-paced gaming to the next level, the LG 34UC89G is the perfect monitor.

In case you prefer more graphically-oriented games such as RPGs, consider a 3440×1440 60Hz-75Hz ultrawide monitor instead.