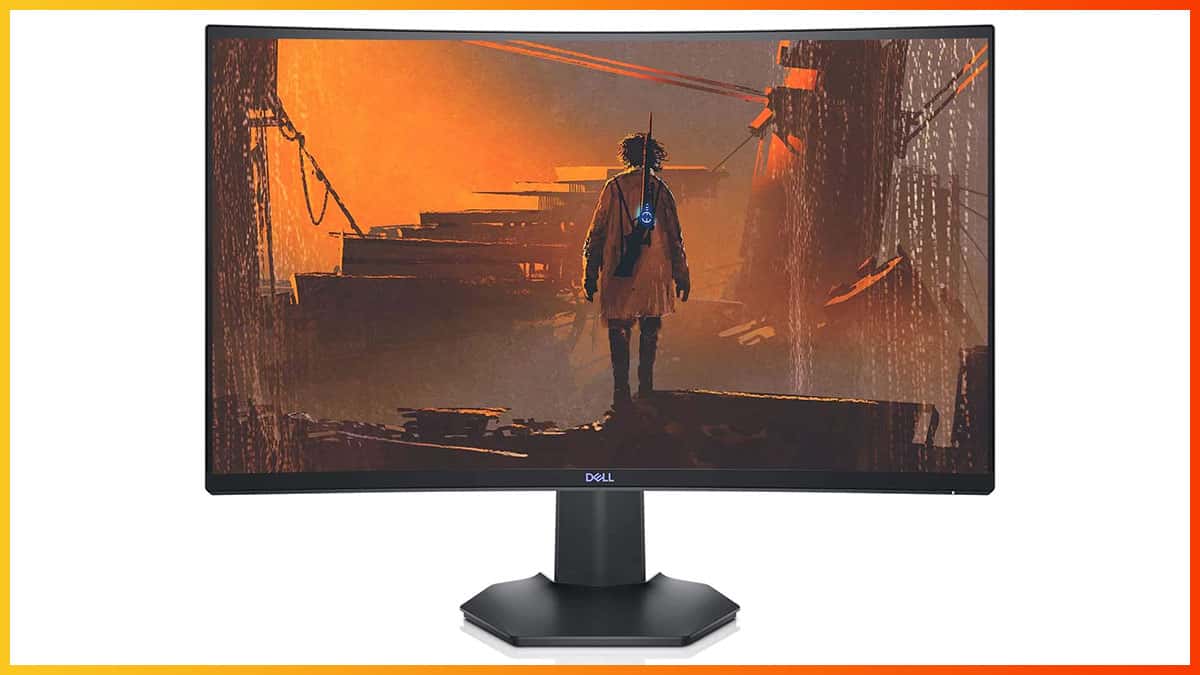 The Dell S2721HGF is 27″ 1080p 144Hz curved gaming monitor with a VA panel, FreeSync Premium (G-SYNC Compatible), MBR, and a height-adjustable stand. If you can get it a reasonable price and don’t mind a bit of ghosting and the lower pixel density, it’s an excellent budget gaming monitor.

The Dell S2721HGF is a 144Hz gaming monitor based on a 1080p curved VA panel boasting a high contrast ratio. Additionally, it offers a height-adjustable stand, MBR, and AMD FreeSync Premium with certified G-SYNC compatibility.

Thanks to its VA panel with a 3,000:1 contrast ratio, the Dell S2721HGF is able to deliver deep blacks for vivid details in the shadows of the image.

Unlike IPS monitors, it doesn’t suffer from IPS glow, which in addition to its high contrast ratio makes for an immersive viewing experience, especially when watching dark scenes in a dark room.

On top of that, the monitor has a decent 350-nit peak brightness for a budget VA panel. So, you can also use it in well-lit rooms as it can get bright enough to mitigate glare.

It has a specified gamut coverage of 72% NTSC, which is equivalent to around 99% sRGB gamut size – this results in around 95% coverage of the sRGB color space, depending on the unit.

In other words, you get accurate and rich colors. Some VA panel monitors around this price range have wider color gamuts, but this usually ends up in over-saturated colors when watching sRGB content (most games and web content) due to the lack of a proper sRGB mode.

One thing to keep in mind is that VA monitors don’t have as wide viewing angles as IPS technology, even though both specify 178°. Some minor shifts in contrast/gamma are noticeable on the S2721HGF, but nothing too extreme.

You can even comfortably do some basic content creation, but for professional color-critical work, IPS is still the way to go.

The monitor has a pixel density of 82 PPI (pixels per inch) as a result of the 1920×1080 Full HD resolution being displayed on a 27″ sized screen. This is not ideal as you don’t get a lot of screen real estate, while text and details end up looking a bit pixel-y.

For watching movies, gaming, and other everyday use, the lower pixel density won’t bother most users. However, if you want to use the monitor for a lot of reading and typing, and would like to see sharp and crisp text, we recommend going with either a 24″ 1080p (92 PPI) or 27″ 1440p (108 PPI) display instead.

Moving on, the Dell S2721HGF monitor has a low input lag of around 4ms, which means that there’s no perceptible delay between your actions and the result on the screen.

However, its 4ms GtG (gray to gray pixel transition) response time speed is not as great as there’s some noticeable ghosting behind fast-moving objects, though mainly in darker scenes.

‘Extreme’ pushes the pixels to change too fast causing inverse ghosting (or pixel overshoot), while ‘Fast’ is too slow.

‘Super Fast’ balances out the response time so that the pixels change notably faster than the ‘Fast’ mode without causing as much overshoot as ‘Extreme.’

Plus, the ‘Super Fast’ mode has good performance across the entire refresh rate range, so if you’re using the monitor at 60Hz or with a variable refresh rate (VRR), you don’t have to change the overdrive setting.

Overall, the amount of ghosting will be tolerable or even negligible to most gamers, except for those particularly sensitive to it. In fact, the response time speed is quite decent for a VA panel display, but if you mostly play fast-paced competitive titles, you should get a monitor with a TN or an IPS panel.

The Dell S2721HGF supports VRR with both AMD’s FreeSync Premium and NVIDIA’s G-SYNC Compatible certifications within the 48-144Hz range for tear-free gameplay.

This is not unexpected as this issue only affects some units of monitors.

Since Dell tends to have a bit better quality control than most manufacturers and as there’s at least some sort of validation from NVIDIA, we expect that the VRR brightness flickering issue should be less frequent and less intense on the S2721HGF in comparison to other uncertified high refresh rate VA monitors with FreeSync/G-SYNC Compatible.

As 144Hz makes screen tearing much less noticeable than 60Hz, a lot of users won’t find FreeSync necessary, allowing them to use MPRT instead.

MPRT is a Motion Blur Reduction technology that uses backlight strobing at either 120Hz or 144Hz in order to reduce perceived motion blur at a cost of picture brightness.

It can’t be active at the same time as VRR and it introduces screen flickering. The flickering is invisible to the human eye, but those sensitive to it may experience headaches after prolonged use.

The backlight of the monitor is flicker-free (unless MPRT is enabled), and there’s a low-blue light mode (ComfortView).

The OSD (On-Screen Display) menu is navigated via the directional joystick placed at the rear of the monitor. You’ll also find four hotkeys below the joystick, which can be used as shortcuts for certain OSD features.

The design of the monitor is sturdy and sleek with thin bezels at the top and at the sides of the screen. You can adjust the height of the screen by up to 100mm, tilt it by -5°/21°, or VESA mount it via the 100x100mm pattern.

There’s a matte anti-glare screen coating that prevents reflections without making the picture too grainy. The Dell S2721HGF has a 1500R curved screen for added immersion, though such curvature is not particularly noticeable on 27″ sized screens.

You will also be able to find the Dell S2421HGF model, but keep in mind that it is not a 24″ version of this monitor as it uses an entirely different TN panel.

At ~$210, it offers good value for money considering that most 27″ 1080p 144Hz VA monitors go for the same price yet lack certified G-SYNC compatibility.

A good cheaper alternative is the AOC C24G1A. It has a wider color gamut (with an sRGB mode), a 165Hz refresh rate, and a higher pixel density due to its 24″ screen size, but it’s not certified as G-SYNC Compatible. It goes for just ~$150 though.

At that price range, we recommend going with an IPS monitor if you don’t want to worry about brightness flickering or slow response time speed – though you will get a lower contrast ratio.

Visit our best monitors under $300 guide for more monitors and information.

All in all, the Dell S2721HGF is an excellent 27″ 1080p 144Hz curved gaming monitor for those who don’t mind the lower pixel density and a bit slower response time speed.

VRR performance is hit or miss, as is the case with most VA monitors, but here you at least get some validation from NVIDIA. In fact, if you get a unit that flickers with NVIDIA cards, you are fully within your rights to RMA the monitor as the ‘G-SYNC Compatible’ certification promises no flickering, blanking, or other issues.