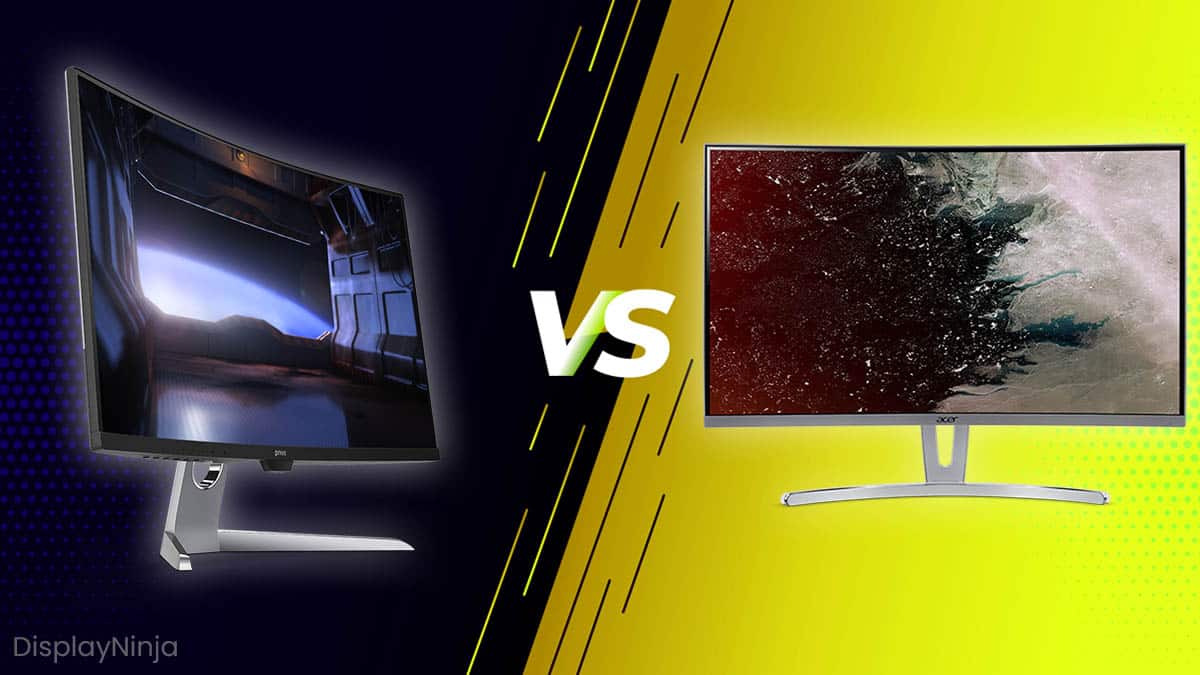 If you’re interested in an ultrawide display, we highly recommend getting a curved model.

As far as the widescreen monitors are concerned, it’s a matter of personal preference.

When curved displays first appeared on the market, most people thought it was just a gimmick and a passing fad that’s not worth the extra cost. And while that’s partially true for TVs, it’s a whole different story when it comes to monitors.

The lower the number preceding the ‘R’ is, the steeper the screen curvature will be.

Additionally, the curvature rating tells you the optimal viewing distance.

So, with a 2000R curved monitor, you’ll only get full benefits of the curvature if you are no more than 2 meters away from the screen.

Samsung’s Odyssey gaming monitors are the first models to have a 1000R curvature, which is supposed the match the curvature of the human eye for added immersion.

Unlike curved TVs, which usually have subtle curvatures of ~4000R, most curved monitors have steeper curvatures of ~1500R. This makes sense as you’ll be sitting further away from a TV than you’d from a monitor.

However, the problem with TVs is that to take full advantage of a curved screen, you also need to be sitting directly in front of it, which is impossible to do if you have a lot of people in the room.

Additionally, people watching the TV from the far sides of a room wouldn’t be able to see the entire screen due to the curvature.

So, it’s understandable why, for most people, a curved TV is not worth the extra cost.

There are some advantages to curved TVs too, which you can learn more about in our curved vs flat TV article.

These problems don’t affect curved monitors as they are intended for one person sitting in front of the screen.

What’s more, curved monitors are not necessarily more expensive than flat-screen models. Oftentimes, curved panels are used for budget gaming monitors that are actually more affordable than their flat-panel counterparts.

Of course, just how useful is the curvature on a monitor mainly depends on the display’s size and curvature radius.

Small 24″ and 27″ sized curved monitors usually have curvatures of 1500R or 1800R, which aren’t even that noticeable due to their small screen size.

With 32″ or bigger curved monitors, the curvature becomes more noticeable, especially if it’s 1500R or steeper, but even then, the curvature isn’t exactly necessary.

You shouldn’t buy a 24″ – 32″ widescreen (16:9 aspect ratio) monitor just because it’s curved unless you’re also interested in other features and specifications the display offers.

It’s only when we get to ultrawide (21:9) or ‘super’ ultrawide (32:9) monitors that the curvature becomes almost vital for an immersive viewing experience.

Due to the extra width of these monitors, the curvature actually brings the edges of the screen closer to you thus covering more of your peripheral vision.

This adds extra depth to the image as you can see more of the screen at once, without having to move your eyes/head as much, which improves both immersion and eye comfort, and also eliminates distortion at the edges of the screen.

The main disadvantage of curved monitors is the viewing angles as you won’t get the optimal viewing experience unless you’re sitting directly in front of the screen.

So, if you wish to watch a movie from your bed, and your curved monitor isn’t facing it, the picture quality may not be ideal, especially if the monitor has a VA panel with inferior viewing angles to IPS technology.

Naturally, this depends on the monitor’s screen size and curvature as well as the particular angle you’d be looking at the screen.

Another concern users have with curved monitors is regarding professional use, such as architecture, 2D and 3D modeling, design, etc., but as long as the curvature is not too steep, it won’t be an issue.

In the end, the most important thing to consider is the panel quality itself.

For professional use, you’ll want an IPS panel display for the most accurate colors and widest viewing angles, and almost all widescreen IPS displays are flat-screen.

When it comes to the ultrawide models, the ones intended for professional use have subtle curvatures precisely for this reason; they eliminate distortion without stretching out the objects which are close to the edges of the screen.

For gaming and multimedia/everyday use, we recommend getting a curved monitor if you want an ultrawide display, especially if it’s 34″ or larger – though there are some good flat-screen models available too.

As far as the widescreen models are concerned, it’s just a matter of personal preference.

What Is VA Smearing And Can You Fix It?