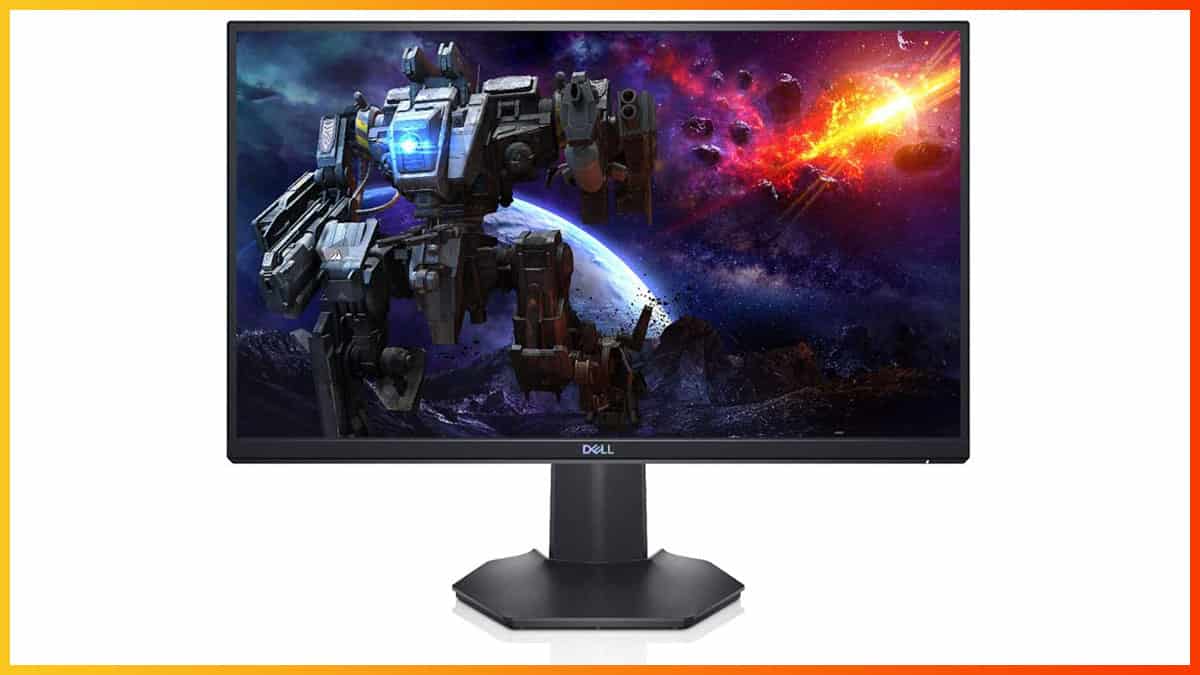 The Dell S2421HGF is an excellent budget 144Hz monitor for competitive gaming. It also supports AMD FreeSync and a height-adjustable design with ultra-thin bezels.

However, most gamers would be happier with an IPS model at this price range due to their wider viewing angles and better image quality with similar performance.

The Dell S2421HGF is a budget 24″ 1080p 144Hz monitor aimed primarily at competitive gamers who prefer performance over image quality due to its TN panel.

Unlike most models with similar specifications though, the Dell S2421HGF features a nice design with ultra-thin bezels and a height-adjustable stand!

Based on a TN (Twisted Nematic) panel, the monitor has narrow viewing angles of 170° horizontally and 160° vertically, meaning that the picture will shift in brightness, contrast, and color when looked at an angle.

As long as you’re sitting directly in front of the monitor, this won’t be an issue. Some vertical gamma shifts can be detected, but luckily, you can adjust the angle and the height of the screen to mitigate this.

The Dell S2421HGF has a specified color gamut of 72% NTSC, which is equivalent to ~100% sRGB gamut size. However, this doesn’t mean that the monitor covers the whole sRGB gamut.

For gaming and other everyday use, this won’t a problem, but naturally, due to the narrow viewing angles and inconsistent colors of the panel, we don’t recommend the Dell S2421HGF for any type of color-critical work.

Other panel-related specifications include a 350-nit peak brightness, which makes the monitor more than bright enough under normal lighting conditions – and a static contrast ratio of 1,000:1, which is standard for TN and IPS monitors at this price range.

You won’t get as deep blacks as that of VA panels with a ~3,000:1 contrast ratio, but these monitors have other disadvantages at this price point, such as a considerably slower pixel response time speed.

The Full HD resolution results in a decent pixel density of ~93 PPI (pixels per inch) on the 23.8″ viewable screen of the monitor. This means that you get a fair amount of screen real estate, as well as reasonably crisp details and text.

There are three response time overdrive modes: Fast, Super Fast, and Extreme. The ‘Extreme’ is the fastest and it doesn’t introduce much overshoot, so we recommend using it at 144Hz.

If you’re using variable refresh rate (VRR) and your frame rate sits around 60FPS, dialing back the overdrive to Super Fast can provide better results.

It’s supported over both HDMI and DisplayPort, and while the monitor is not officially certified as ‘G-SYNC Compatible’ by NVIDIA, you can use FreeSync with GeForce graphics card over DisplayPort as well, without any issues.

The Dell S2421HGF input lag amounts to only ~4ms, which makes for imperceptible delay.

The OSD (On-Screen Display) menu is well-organized and easy to use thanks to the directional joystick placed at the rear of the Dell S2421HGF monitor.

There are four additional hotkeys below the joystick, three of which can be used for custom shortcuts, while the power button is at the right side of the monitor, below the bottom bezel.

You’ll also find advanced image adjustment tools, such as hue, saturation, and sharpness, besides the common brightness, contrast, and color temperature settings. There are no gamma modes, though.

Finally, the monitor is flicker-free and applies a low-blue light filter once you select the ComfortView picture mode.

The design of the monitor is quite decent considering the price. It has a sturdy stand that’s height-adjustable by up to 100mm. You can also tilt the screen by -5°/21° or mount it via the 100x100mm VESA pattern.

Further, the screen has ultra-thin bezels at the top and at the sides, which is rare for these budget 24″ 1080p 144Hz TN monitors. The 25% low-haze anti-glare matte screen finish prevents reflections without making the picture appear grainy.

The Dell S2421HGF goes for ~$180, which makes for decent value for the money considering that similar models, such as the Acer KG241QP and the LG 24GL600F go for the same price, yet feature a less appealing design with thicker bezels and no height adjustment.

The Acer KG241QP and the LG 24GL600F do offer a Motion Blur Reduction (MBR) technology, but it’s not particularly well implemented as there’s strobe crosstalk and a lot of brightness is sacrificed in the process. MBR also introduces flickering, which many are sensitive to, and it can’t be active at the same time as VRR.

So, if you want a monitor with a decent MBR implementation, you’ll need to invest in the BenQ XL2411K. However, as it goes for ~$230, you might as well add $20 extra and get the Acer XF250Q at that point, which not only supports MBR but also has a higher 240Hz refresh rate.

Anyway, at this price range ($150 – $200), we recommend considering an IPS panel model instead, such as the AOC 24G2. It has wider viewing angles, more consistent colors, a wider color gamut, and a more ergonomic stand.

While the S2421HGF has a technically faster pixel response time speed, it’s not something you will notice unless you’re deliberately looking for it.

So, get the Dell S2421HGF or one of the above-mentioned TN models only if you don’t care about image quality and want every millisecond of advantage you can get. Otherwise, get an IPS model, such as the AOC 24G2, the ViewSonic XG2405, or the ASUS VP249QGR, depending on availability.

The Dell S2421HGF is an overall excellent budget monitor for competitive gaming, but unless you’re a particularly hardcore player, we recommend going with an IPS alternative.