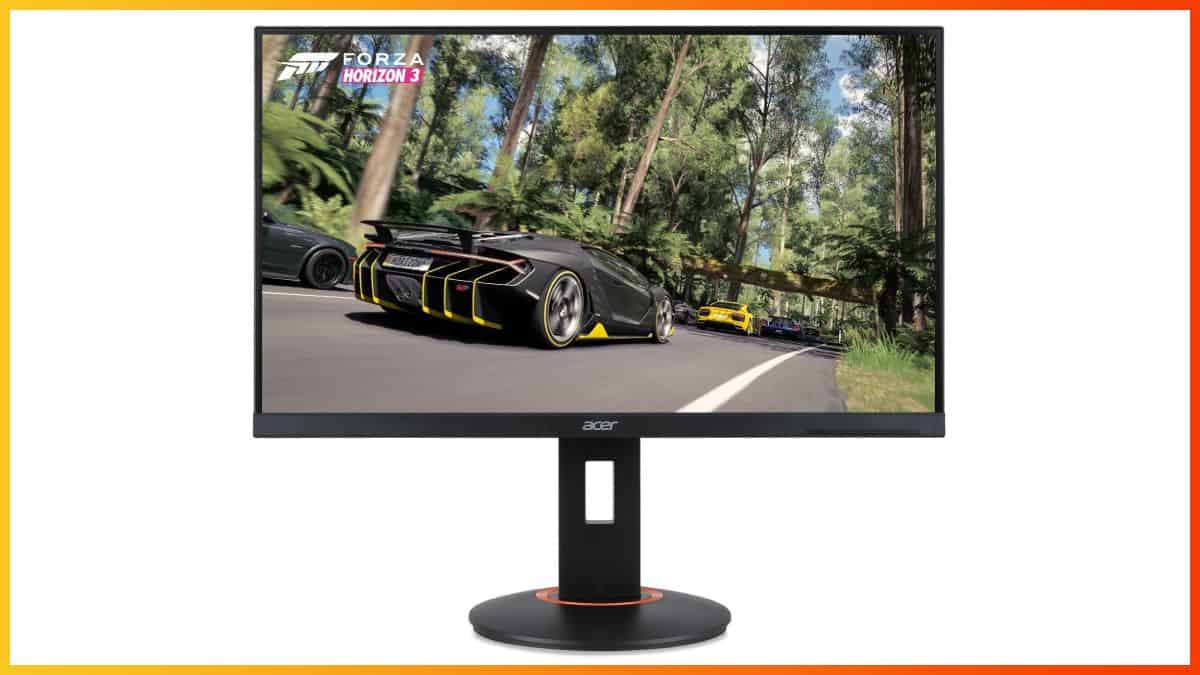 The Acer XF250Q is one of the most affordable 240Hz gaming monitors. In addition to 240Hz, it offers low input lag and quick response time for a flawless competitive gaming experience. It’s the perfect display for hardcore players on a budget.

Whether you want to upgrade your old 144Hz monitor to a faster model or you’re new to fast-paced competitive gaming and want to go for 240Hz straight away, the Acer XF250Q is one of the cheapest 240Hz displays you’ll find. Here’s how it performs.

Note that the full model name of the unit we’re reviewing is the Acer XF250Q Cbmiiprx.

The Acer XF250Q Abmiidprzx (XF250QA) is the same monitor with an extra DVI port, a quad-USB 3.0 hub, and Motion Blur Reduction technology.

So, as far as the image quality goes, you’re getting the same viewing experience that you would get on most 240Hz monitors.

In comparison to IPS and VA panels, you get washed out colors and narrow viewing angles, but you do get a rapid 1ms response time speed for minimal ghosting.

With proper calibration, the Acer XF250Q monitor does offer a decent image quality while the narrow viewing angles aren’t troublesome as long as you’re in front of the screen.

It goes without saying that at this point, you have to sacrifice image quality for performance. So, if you want a better image quality, you should opt for a 1440p monitor or a 1080p 144Hz display with an IPS or VA panel instead.

In order to secure fluid performance, the Acer XF250Q features 1080p resolution, which is not very demanding on your GPU/CPU and will thus allow you to easily reach and maintain high frame rates in the eSports titles.

Thanks to its low input lag of ~3ms and quick response time, the monitor delivers a buttery-smooth gaming experience without any ghosting, motion blur, or perceptible delay.

Now, going from 144Hz to 240Hz won’t be nearly as noticeable as it is going from 60Hz/75Hz to 144Hz, but the difference is definitely there. And if you’re a serious competitive gamer, you’re going to want every millisecond of advantage you can get.

The OSD (On-Screen Display) menu can be navigated via the six hotkeys placed beneath the bottom bezel at the right side of the monitor.

While the menu isn’t particularly user-friendly nor intuitive, it contains all the settings/features you’ll need. When OSD is closed, the hotkeys can be used as shortcuts for certain functions such as volume, input source, and overdrive (Off, Normal, Extreme).

The build quality of the Acer XF250Q gaming monitor is somewhat cheap with simple plastics, but the stand is fully ergonomic with up to 150mm of height adjustment, -5°/35° tilt, +/- 60° swivel, 90° pivot, and 100x100mm VESA mount compatibility.

Connectivity options include HDMI 1.4, HDMI 2.0, DisplayPort 1.2, two 2W integrated speakers and a headphone jack. FreeSync works over both HDMI 2.0 and DP with a 48-240Hz VRR range.

However, we highly recommend getting the Dell S2522HG instead for ~$250. It’s just as fast, but uses an IPS panel with much better colors and wider viewing angles.

Overall, the Acer XF250Q is a decent 240Hz gaming monitor, but there are better options at this price range.