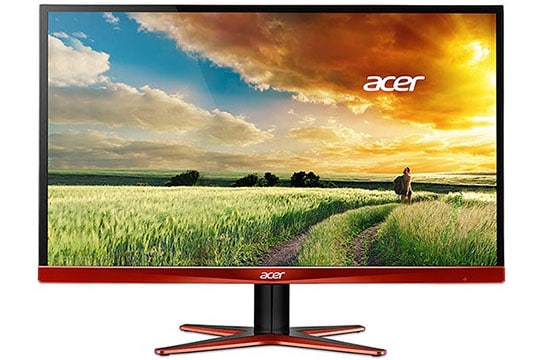 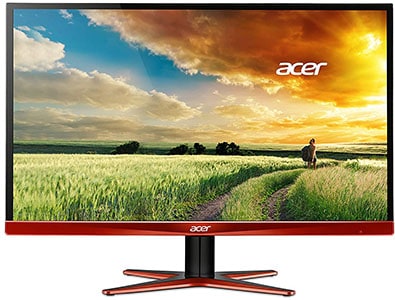 What made this monitor particularly compelling is the fact that it was one of the first FreeSync displays to receive certified G-SYNC compatibility, thus providing a variable refresh rate (VRR) for both AMD and NVIDIA compatible graphics cards.

First of all, 1440p (2560×1440 WQHD) resolution ensures sharp and crisp details with a lot of screen space available.

This also means that reaching higher frames will be more taxing on your CPU and GPU as opposed to the standard 1080p resolution; so, keep that mind.

The monitor is based on the TN (Twisted Nematic) panel technology, which is known for narrow viewing angles (160° vertically and 170° horizontally) and inferior color quality in comparison to other panels (IPS and VA).

Other panel-related specs include a 350-nit peak brightness, a 1,000:1 contrast ratio, and standard sRGB color gamut with 8-bit depth support, which overall makes for a decent picture quality. 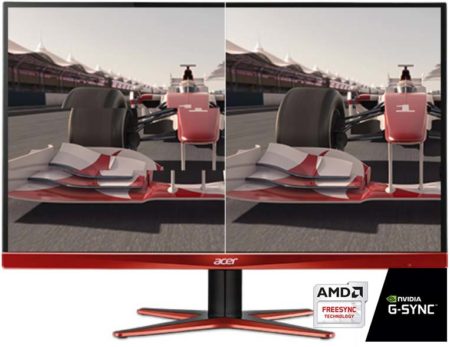 The Acer XG270HU input lag performance is top-notch with only ~5ms of imperceptible delay at 144Hz.

As previously mentioned, there’s no noticeable ghosting of fast-moving objects in video games.

There are also three overdrive options (Off, Normal, and Extreme) available, though we found that leaving it at ‘Normal’ works the best as ‘Extreme’ introduces some pixel overshoot (inverse ghosting).

The backlight of the monitor is flicker-free, and there’s a built-in low-blue light filter meaning that you can game for hours without eye fatigue, strain, or headaches.

Moving on, if you have a compatible graphics card, you can make the Acer XG270HU 144Hz monitor change its refresh rate dynamically and according to the frame rates generated by your GPU.

In turn, you get a variable refresh rate which eliminates all screen tearing and stuttering with virtually no input lag penalty.

For FreeSync, you will need at least 417.71 NVIDIA drivers and a GTX 10-series or newer GPU, while almost all AMD cards support this technology.

The new batch of the Acer XG270HU monitors includes an updated OSD menu that offers customizable crosshairs, black enhancement, and gamma settings – these features were not available on the older models. 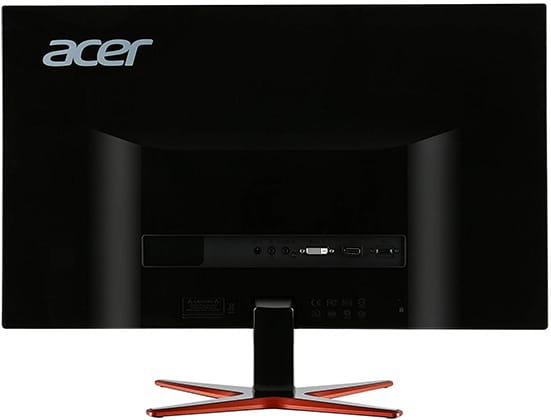 The design is definitely the monitor’s weakest point as you will most likely be put off by its orange/bronze design; what’s more, the stand is not VESA mount compatible, and it’s tilt-only by -5°/15°.

At the back of the monitor, you will find DVI (max 75Hz on this monitor), HDMI 2.0, DisplayPort 1.2a, a headphones jack, and an audio line-in port for the two 2W integrated speakers.

Consider investing another $80 for the LG 27GL83A. It’s just as fast as the XG270HU, but it also has much better colors and wider viewing angles.

If you’d like a 27″ 1440p 144Hz gaming monitor, and you don’t play a lot of competitive or fast-paced games, consider the AOC CQ27G2 with a higher contrast ratio for deeper blacks, wide color gamut, and a more affordable $250 price.

Be sure to visit our always up-to-date best gaming monitor buyer’s guide for the best deals available and more information.