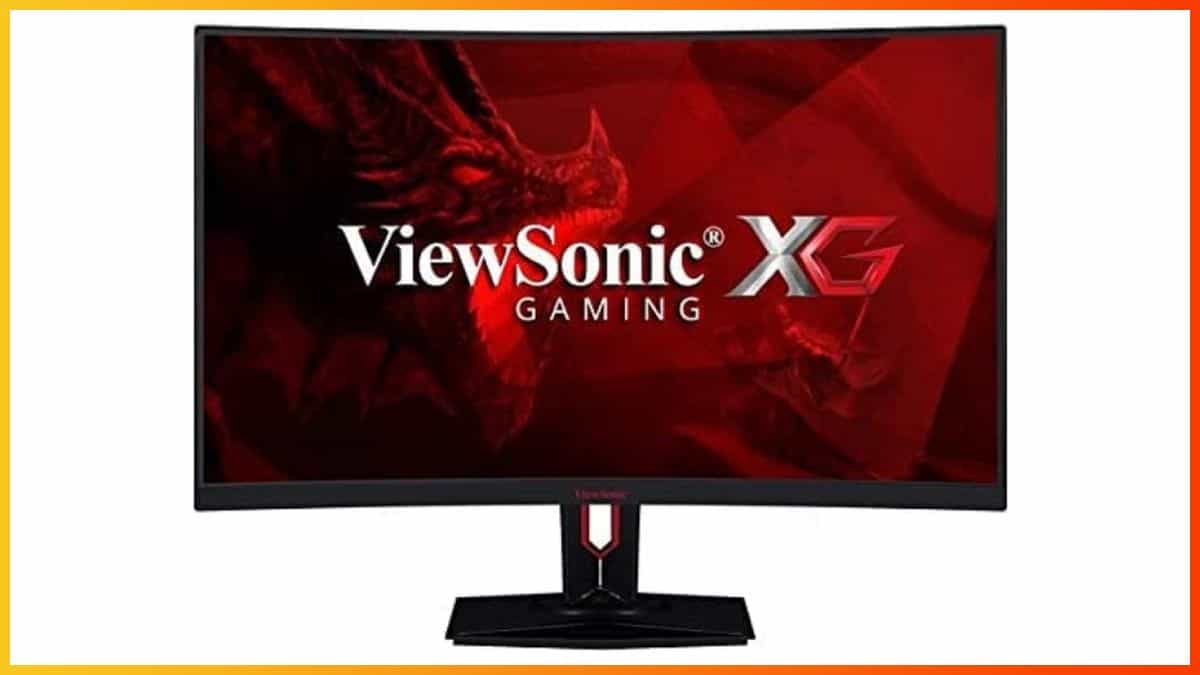 The ViewSonic XG3240C is a 32″ curved 1440p 144Hz gaming monitor with a VA panel that thanks to its decent response time speed effectively eliminates most of ghosting and motion blur. Moreover, the monitor offers an ergonomic and slim design, rich connectivity, and plenty of features including AMD FreeSync.

The ViewSonic XG3240-C combines its high resolution and superior contrast ratio with a 144Hz refresh rate and a rapid 3ms response time speed to deliver an amazing gameplay experience with no compromises.

What distinguishes this gaming monitor from the rest of similar 32-inch 1440p 144Hz VA displays is the fact that it’s based on a newer VA panel, which is noticeably faster and therefore deals better with motion blur.

In addition, the ViewSonic XG3240C monitor offers a wide range of connectivity options and ergonomics, as well as plenty of gaming features, including AMD FreeSync.

Though many find 32-inch displays to be too large, it’s quite easy to get used to it. Moreover, the screen curved (1800R), which makes gaming more immersive.

Due to the monitor’s size, you will find it best to sit a bit further away from the screen than normal; this way, you won’t have to move your head at all when gaming, but rather enjoy the spacious screen.

This means that you won’t be able to distinguish individual pixels unless you’re looking at the screen from just a few inches away, which you shouldn’t be doing anyway.

While the ViewSonic XG3240C 31.5-inch curved gaming monitor can support HDR10 content, it’s what many would refer to as a ‘pseudo-HDR’ monitor.

Basically, this means that the monitor can accept the HDR10 signal and display it, but since it lacks proper brightness and contrast levels as well as an extended color gamut, it won’t be able to really enhance the picture quality.

Some HDR-compatible video games might look better, but most of them will have oversaturated colors and look better with HDR disabled.

Still, since HDR isn’t exactly the main selling point of the ViewSonic XG3240C display, there’s no harm done. Besides, we doubt that it adds much to the price, if you want a monitor with true HDR support, you’re gonna have to pay a lot more.

Straight out of the box, the ViewSonic XG3240C 1440p curved monitor delivers a striking image quality. The backlight bleeding is minimal and only visible in extreme scenarios, as expected.

Furthermore, the 178-degree wide viewing angles ensure that the picture doesn’t shift in color or contrast when it’s viewed from the far left or the right, though some deviation is visible when looking from up or down, though that’s still only in extreme cases.

Although the colors are rich and uniform, at this price point, you could get a 4K 10-bit IPS panel monitor instead, which would be much better for editing, designing, and other color-critical tasks.

Finally, gaming is where the ViewSonic XG3240C shines the brightest. The input lag performance is exceptional amounting to just under 5ms. What we were most surprised by, however, is the impressive response time speed.

The biggest downside of VA panels is prominent motion blur in fast-paced games, particularly when dark scenes are involved. Luckily, the new VA found in the ViewSonic XG3240-C has finally addressed this.

We’ve found the Ultra Fast setting to work best as ‘Fastest’ can introduce overshoot or inverse ghosting in certain games.

There’s still some smearing in dark scenes, but it’s tolerable, and rather minor given that it’s a VA panel display.

In combination with the rapid 144Hz refresh rate, the impeccable input lag and response time speed performance make for incredibly enjoyable fast-paced gaming while the picture quality is uncompromised.

There’s a ton of features available in the OSD menu, which is easily navigable using the joystick located at the back of the monitor.

Some of the more exciting features available include pre-calibrated picture presets for FPS, RTS, and MOBA genres as well as three customizable profiles where you can adjust everything from the Overdrive settings and Monitor Hz Cap (144Hz, 100Hz, or 60Hz) to the standard brightness, contrast, and gamma settings (six settings from 1.8 to 2.8).

In addition, you will find ‘Black Stabilization’, which increases visibility in dark parts of games. Naturally, the monitor is flicker-free and has a low blue light filter so that you can play for hours without straining your eyes.

For those with AMD graphics cards or Xbox One S/X consoles, FreeSync technology can synchronize the GPU’s frame rate with the monitor’s refresh rate, which in turn eliminates screen tearing and stuttering with minimal input lag. The ViewSonic XG3240C FreeSync range amounts to 48-144Hz.

FreeSync also works without any issues when using a compatible NVIDIA G-SYNC graphics card. However, some users might experience brightness flickering when FreeSync/G-SYNC is enabled.

This only affects some units of the monitor, and the brightness flickering is mostly present below ~48FPS and/or when your FPS fluctuates a lot. Sadly, this issue affects a lot of monitors based on VA panels, and, hopefully, a GPU driver update will fix it for good at some point.

The ViewSonic XG3240C 144Hz 1440p FreeSync gaming monitor offers a wide range of ergonomics and connectivity options. You can tilt the screen by -5°/25°, swivel it to the left and right by 45°, pivot it by 90° into portrait/landscape position, height adjust it by up to 80mm, and finally, VESA mount it using the 100 x 100mm pattern.

Moving on to the connectivity, there are two HDMI 2.0 ports, DisplayPort 1.4, two audio jacks, two 6W integrated speakers with a 5W amplifier as well as a quad-USB 3.0 hub, two at the back of the monitor and two at the side for easier access.

Lastly, the monitor has a low-haze anti-glare coating, which prevents light reflections without affecting the image quality. Additionally, there’s a cable management hole as well as a headphones hook at the back of the monitor.

If you’re looking for something similar, we recommend the Gigabyte G32QC.