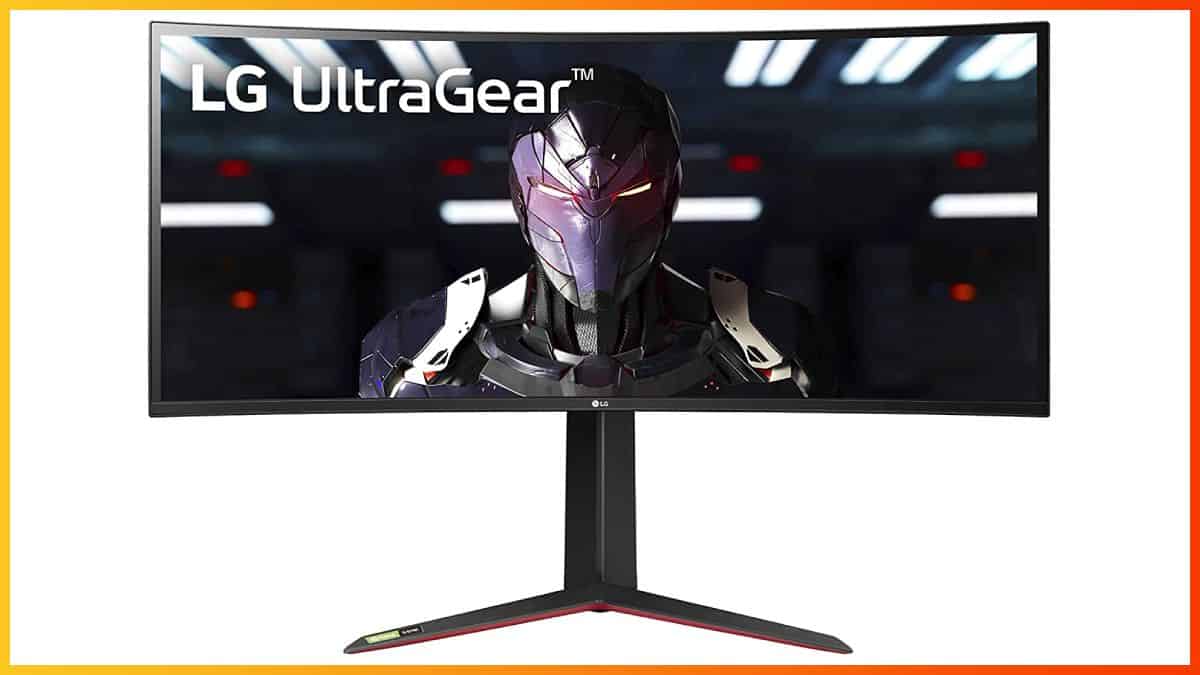 The LG 34GP83A is an excellent monitor for the price! It offers flawless performance thanks to its rapid response time, low input lag, high refresh rate, and certified G-SYNC compatibility.

Moreover, its Nano IPS panel ensures vibrant colors which along with the 3440×1440 ultrawide resolution makes for a stunning and immersive viewing experience.

The LG 34GP83A-B is the successor to the popular LG 34GK950F gaming monitor. It features a similar 34″ 3440×1440 144Hz Nano IPS panel, but with a notably faster 1ms GtG response time speed and certified G-SYNC compatibility.

Note that there’s also the LG 34GN850 model, which features identical specifications to the LG 34GP83A, yet it goes for $200 more.

The only difference between the two models includes a slightly different logo design at the back of the monitor and a different OSD (On-Screen Display) menu layout.

Of course, such wide color gamut can make sRGB content (which includes most of games and web content) appear over-saturated. Luckily, the LG 34GP83A monitor has an emulated picture mode for sRGB content.

This mode will restrict the color output to ~100% sRGB, allowing you to enjoy more accurate color representation for sRGB content. Note that the brightness setting is not locked in this mode on this monitor.

Regardless of whether you’re watching sRGB or DCI-P3 content, you’ll get accurate, consistent and gorgeous colors!

The monitor has a peak brightness of 400-nits, which means it can get more than bright enough even in well-lit rooms while the static contrast ratio amounts to 1,000:1.

As it’s the case with all IPS panel displays, the contrast ratio is not their strongest point. In comparison to VA-panel monitors, blacks won’t be quite as deep on the LG 34GP83A.

Then again, VA monitors have disadvantages of their own such as significantly slower pixel response time speed, and they don’t have as wide viewing angles nor as consistent colors.

The LG 34GP83A has 178° wide viewing angles allowing you to watch the screen at basically any angle without the picture degrading in quality in any way (color, brightness, or contrast).

Further, the 3440×1440 screen resolution results in a perfect pixel density on the monitor’s 34″ sized screen.

With roughly 110 pixels per inch, you get plenty of screen space and sharp text/details without any scaling needed.

Lastly, the LG 34GP83A display supports HDR (High Dynamic Range), but for a notable improvement in HDR picture quality, a monitor would need a much higher brightness and contrast.

With the LG 34GP83A, you just get a glimpse of HDR, but thanks to its wide color gamut, some HDR content will look a bit better.

The LG 34GP83A has a very low input lag of ~4ms, which makes for imperceptible delay between your commands and the result on the screen.

Next, the response time, which is the speed at which pixels transition from one color to another, is excellent as well!

There are four response time overdrive modes: Off, Normal, Fast and Faster.

We recommend using the Fast mode at high refresh rates for zero ghosting. At around 60Hz, the Normal mode is better as there’s less overshoot.

You can also overclock the monitor from the native 144Hz refresh rate to 160Hz. However, due to the DisplayPort 1.4 bandwidth limitations, you will need to use an 8-bit color depth or chroma subsampling for over 144Hz.

In the minority of games that support 10-bit color depth, you can drop the refresh rate to 144Hz, but for the most part, we recommend going with 160Hz and 8-bit color depth.

We recommend against using 4:2:2 chroma subsampling as it makes the text appear smudgy and fringy.

Moving on, the LG 34GP83A supports AMD FreeSync with a 48-160Hz VRR (variable refresh rate) range, and NVIDIA certifies it as G-SYNC Compatible.

At the time of this writing, it’s the only 3440×1440 ultrawide gaming monitor with official certification.

Another thing to keep in mind about IPS monitors is IPS glow. This is an expected drawback of this panel technology, which is characterized as visible ‘glowing’ around the corners of the screen.

The amount of IPS glow varies across different units of the monitor, but in most cases, it’s only visible on really dark backgrounds (in a dark room). In all but the most extreme cases, it’s completely manageable.

To access the OSD (On-Screen Display) menu of the monitor, you can use LG’s On-Screen Control application or the joystick placed beneath the bottom bezel of the screen.

You will find all the standard image settings as well as some advanced adjustment tools such as color temperature fine-tuning (in 500K increments), four gamma presets and 6-axis hue/saturation.

The monitor has a flicker-free backlight and an integrated low-blue light filter. These two features prevent headaches and eye strain caused by using the monitor for extended periods of time.

The LG 34GP83A has ultra-thin bezels while the design is sturdy and versatile with up to 110mm height adjustment, -5°/15° tilt and 100x100mm VESA mount compatibility. You cannot pivot or swivel the screen, though.

In addition, the screen has a matte anti-glare coating, which eliminates reflections, but doesn’t make the picture appear too grainy while the steep 1900R curvature adds to the overall immersion.

FreeSync is supported over both HDMI (48-85Hz) and DisplayPort (48-160Hz), but for the G-SYNC Compatible mode, you’ll need to use DisplayPort and have a compatible GPU (GTX 10-series or newer).

The LG 34GP83A goes for ~$800, which is a reasonable price considering that the previous-gen model can be found at a similar price, yet it’s notably slower.

As mentioned at the beginning of the article, the LG 34GN850 offers identical specifications and a slightly different design and OSD menu layout.

It seems that newer revisions of the LG 34GN850 feature the same design as the LG 34GP83A.

All in all, if you want a 3440×1440 144Hz ultrawide monitor with a fast response time speed, striking colors and smooth VRR performance, the LG 34GP83A definitely the best model you can get for ~$800.

In case you’re looking for something similar but cheaper (~$400), check out the AOC CU34G2X with a VA panel and a higher contrast ratio, but slower response time and imperfect VRR performance.

There are cheaper 3440×1440 144Hz ultrawide monitors with IPS technology (~$450), but they don’t have as wide color gamut or as fast response time speed, such as the Gigabyte M34WQ. Moreover, they have a flat-screen panel, which most users don’t prefer on ultrawide monitors.