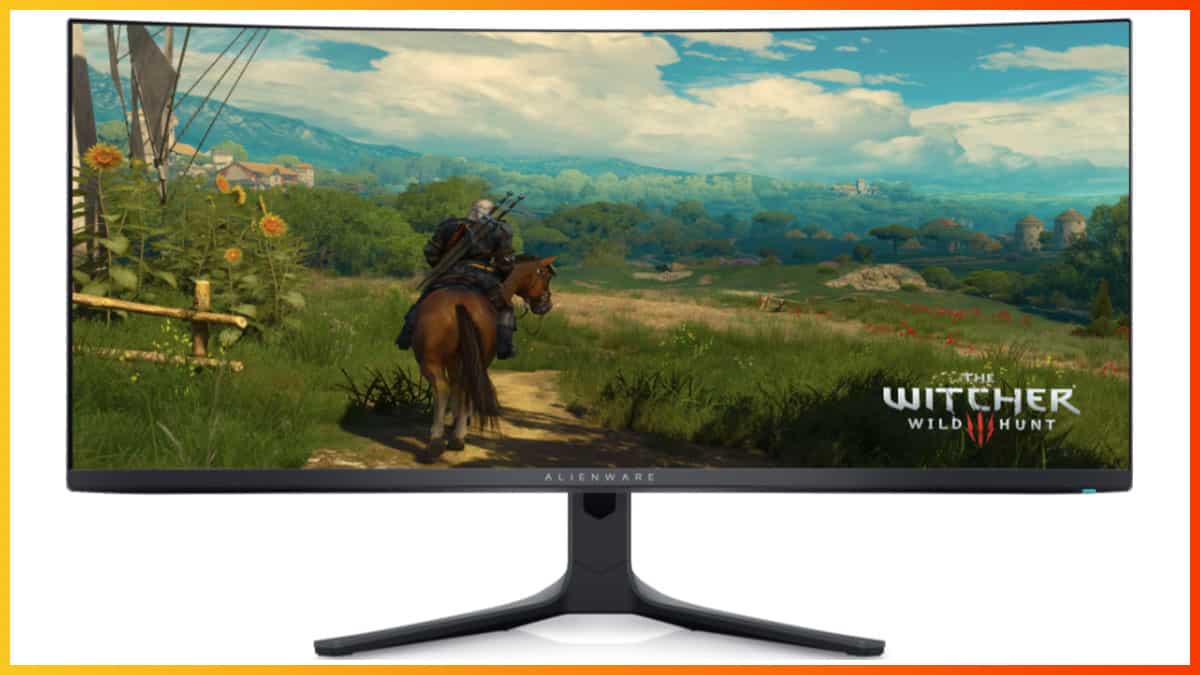 The Dell Alienware AW3423DWF is one of the best gaming monitors available. It undercuts the AW3423DW model by $200 yet offers virtually identical image quality and performance, as well as additional features.

There’s no doubt that the Dell Alienware AW3423DW is one of the most popular gaming monitors thanks to its QD-OLED panel that’s paired with the popular 34″ 3440×1440 ultrawide form factor and a reasonable price.

Now, the new AW3423DWF version uses the same panel, but without the dedicated G-SYNC module, which has its advantages and disadvantages. So, let’s see how the two compare!

You’ll also find dedicated sRGB and DCI-P3 color modes in the OSD (On-Screen Display) menu under the ‘Creator’ presets. These modes clamp the gamut to their respective color space and allow for brightness and gamma adjustments.

This means that in comparison to LG’s W-OLED panels, you get a higher sustainable brightness for a 100% window and less aggressive ABL (Automatic Brightness Limiter), allowing for a brighter SDR image during everyday use.

While the AW3423DWF can get brighter than LG’s panels with small highlights, some W-OLED displays can achieve a higher brightness with 10% white windows. Still, due to the overall higher luminance and more saturated colors (which further increases perceived brightness), the Dell Alienware AW3423DWF appears generally brighter.

Naturally, one of the main advantages of OLED technology is the basically infinite contrast ratio as each pixel produces its own light and can be individually switched off for true blacks.

This also means you won’t get any backlight bleeding, IPS/VA glow, blooming, scanlines or other visual artifacts associated with LED-backlit LCDs.

There are two HDR modes: DisplayHDR 400 TrueBlack and HDR Peak 1000.

While HDR-1000 allows the screen to get brighter, it can over-expose some highlights and trigger ABL in some scenes. HDR-400 is not as bright, but offers a more accurate HDR image without ABL. The best option will vary from content to content and your personal preference.

The 21:9 ultrawide aspect ratio further improves the immersion by providing you with an extended field of view in compatible games and video content. However, keep in mind that unsupported content will have black bars at the sides of the screen.

Luckily, most games support 21:9 resolutions (either natively or via mods), apart from a few competitive titles (mainly StarCraft, Diablo 2 Resurrected, Overwatch and Valorant).

Further, the 3440×1440 resolution results in a pixel density of 110 PPI (pixels per inch) on the 34″ viewable screen of the Dell Alienware AW3423DWF monitor. This means that you get plenty of screen space with sharp details and text, and no scaling necessary.

Now, this QD-OLED panel has a peculiar triangular RGB subpixel layout that results in visible green/reddish color fringing on tiny text and thin lines. In games and videos, this isn’t noticeable, but if you plan on using the screen for something like coding and you’re sensitive to this type of visual artifact, it might bother you a bit.

Using ClearType, Better ClearType or Mac/FreeType, you can alleviate this issue in some applications a bit.

Another drawback of the panel is the risk of permanent image burn-in. However, Samsung’s QD-OLED panels are supposed to be more resistant to burn-in than LG’s W-OLED panels, and Dell even offers a three-year warranty that covers it.

So, as long as you use the monitor sensibly and use its integrated (and automatic) burn-in prevention features (Pixel Shift, Pixel Refresher and Panel Refresh), you won’t run into any issues.

The Dell Alienware AW3423DWF has a maximum refresh rate of 165Hz and it supports variable refresh rate with a 48-165Hz dynamic range for tear-free gameplay.

It has AMD’s FreeSync Premium Pro certification, but it’s not officially certified by NVIDIA as ‘G-SYNC Compatible.’

Regardless, VRR works the same with all compatible graphics cards without any issues – apart from the VRR near-black gamma shift that affects all OLED panels; it can only be observed in particularly dark scenes, it’s subtle and rare, and won’t bother most gamers.

Next, OLED panels have a virtually instantaneous pixel response time speed, so you won’t see any overshoot or trailing artifacts behind fast-moving objects.

So, how does the performance compare to the AW3423DW, which has a native G-SYNC module?

In truth, there’s no big difference. The AW3423DW has a bit wider VRR range of 30-175Hz, but you’re not going to notice the 10Hz maximum refresh rate difference, while the AW3423DWF uses LFC below 48FPS (47FPS tripled to 141Hz, for instance) to prevent tearing anyway.

Finally, both the AW3423DW and the AW3423DWF have imperceptibly low input lag, so you won’t be able to notice any delay between your actions and the result on the screen.

Beneath the bottom bezel of the screen, there’s a directional joystick for quick and easy navigation through the OSD menu.

Unlike the AW3423DW, the AW3423DWF model supports Picture in Picture and Picture by Picture, and has some advanced image settings, such as hue, saturation, aspect ratio (21:9, 4:3 and auto) and sharpness – but it doesn’t have an ambient light sensor.

It also has ‘Console Mode’, which allows you to adjust RGB, gamma and Source Tone Map (allows HDR content to be tone mapped by the source device).

Another feature that’s not available on the AW3423DW is Alienvision, which places a rectangle in the center of the screen with different image enhancements:

You can adjust the rectangle size and some other parameters of this feature in Dell’s Alienware Command Center desktop application.

Finally, the backlight of the monitor is flicker-free and there’s an integrated low-blue light filter.

The stand of the monitor is sturdy and versatile with up to 110mm height adjustment, +/- 20° swivel, -5°/21° tilt and 100x100mm VESA mount compatibility, while the screen has a moderate 1800R curvature for added immersion.

While the design of the AW3423DWF is slightly slimmer than that of the AW3423DW, it uses the same anti-reflective screen treatment that prevents reflections without adding any graininess to the image as matte coatings do.

However, under direct lighting, it diffuses the light and makes blacks appear somewhat grayish, so it’s best to view it in a dark room or make sure no light is pointed directly at the screen.

The RGB elements on the AW3423DW model include the Alienware logo and ring at the rear, the power button and a small LED strip beneath the bottom bezel, whereas the AW3423DWF variant doesn’t have that LED strip and it illuminates the number ’34’ instead of the ring at the back.

Since the Dell Alienware AW3423DWF version doesn’t have a G-SYNC module, it has user-updatable firmware via USB and one less cooling fan. It still has one cooling fan for the panel, but it’s quieter than the G-SYNC one.

It also supports 4K HDR on the consoles, but only at 60Hz – the AW3423DW doesn’t support HDR on the Xbox consoles at all, while both monitors support 1440p 120Hz HDR on the PS5.

If you’re looking for something similar, be sure to check out our best ultrawide monitors and best HDR monitors buyer’s guides for more monitors and information.

The ASUS PG42UQ, the LG OLED42C2, the Samsung Neo G9, the Neo G7 and the Cooler Master Tempest GP27U are all worth considering at this price range.

Overall, we find that the AW3423DWF offers better value for the money than the AW3423DW considering that it has basically the same viewing experience, very similar performance and additional features for $200 less.