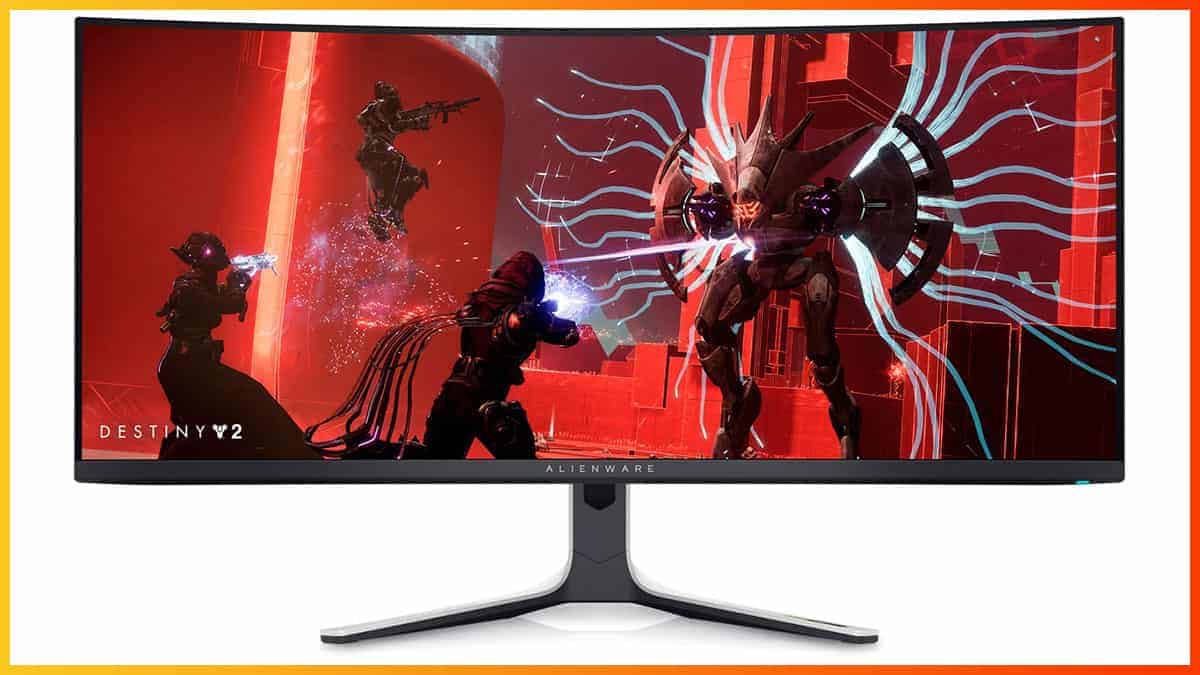 Thanks to its QD-OLED panel with an infinite contrast ratio, high peak brightness and wide color gamut, the AW3423DW offers an incredible image quality, while its low input lag, G-SYNC up to 175Hz and instantaneous response time speed ensure flawless performance. On top of that, it has a robust and stylish design, a three-year warranty and a reasonable price!

Gamers have been waiting for viable OLED gaming displays for quite some time. Until now, your options were restricted to 48-inch models and larger, small portable screens or professional monitors with a 60Hz refresh rate.

The Dell Alienware AW3423DW finally comes to the rescue in a popular 34″ 3440×1440 ultrawide form factor with a high refresh rate, G-SYNC module and a reasonable price.

On top of that, it boasts an impeccable OLED panel enhanced by quantum dots for even higher brightness, wider color gamut and better burn-in resistance than that of previous OLEDs.

Just like every OLED, the QD-OLED panel of the Dell AW3423DW has self-emissive pixels allowing it to reach essentially an infinite contrast ratio with true blacks.

As a result, the monitor can simultaneously display deep blacks, bright punchy highlights and vibrant colors without any backlight bleeding, glowing or blooming for an incredibly immersive HDR viewing experience!

For SDR content, the typical brightness amounts to 250-nits and peaks at around 350-nits, depending on the scene, which is more than bright enough under normal lighting conditions.

In comparison to LG’s OLEDs, the Dell Alienware AW3423DW is notably brighter.

Not only do you get a higher 1000-nit peak brightness in the 1 – 5% white window as opposed to ~800-nits, but also double sustained brightness with a 100% window; when displaying a full white window, the AW3423DW can sustain almost 300-nits, while LG’s OLEDs are limited to ~150-nits.

This also means that ABL (Automatic Brightness Limiter) is not obtrusive on Dell’s monitor as it is on LG’s OLEDs.

As the name suggests, ABL limits the brightness in order to preserve the panel. So, if you’re using the LG C1 at a high brightness setting, putting a mostly white document on the screen will make ABL decrease its brightness to ~150-nits. Then, when you move something around so that there are fewer bright elements on the screen, the brightness will increase again. This frequent change in brightness can become annoying.

One way to prevent it is to just decrease the brightness to ~150-nits so that ABL doesn’t get triggered.

However, since the Dell Alienware AW3423DW has a much higher sustainable brightness at a 100% window, it can be a lot brighter without ABL kicking in, and even when it’s triggered, it will be much less noticeable.

Moving on, the monitor is factory-calibrated at Delta E < 2 for excellent accuracy out of the box and you will find dedicated DCI-P3 and sRGB color modes with adjustable brightness and gamma under the ‘Creator’ picture preset in the OSD (On-Screen Display) menu.

The added horizontal screen space is great for productivity work and audio/video editing due to the wider view of timelines. Movies natively shot at the ~21:9 aspect ratio are displayed without black borders at the top and bottom of the screen, and you get an extended field of view in compatible games.

In some games that don’t support the ultrawide format, you’ll have to choose between having black bars at the sides of the screen or zooming in the picture to fill the screen, which will crop a bit from the top and bottom of the image.

The 3440×1440 resolution also suits the 34″ viewable screen of the Dell Alienware AW3423DW monitor very well. You get a pixel density of roughly 110 PPI (pixels per inch), so you get a lot of screen real estate as well as sharp details and text, without any scaling necessary. It’s also a lot less demanding on your GPU in comparison to 4K UHD or the 2160p ultrawide resolution (5120×2160).

Note that the Dell AW3423DW monitor has the regular RGB subpixels, but in a triangular layout, which can cause some fringing on small text. It’s not noticeable in games and videos, and applying ClearType can alleviate the issue (for even better results you can try Better ClearType Tuner and Mac/FreeType).

Lastly, the monitor has 178° wide viewing angles, ensuring flawless image quality regardless of the angle you’re looking at the screen, and it supports 10-bit color depth for 1.07 billion colors.

Another big advantage of OLED technology is the instantaneous pixel response time speed. You won’t find any trailing or overshoot artifacts in fast-paced games on the Dell AW3423DW, regardless of the refresh rate.

Further, the monitor is equipped with a dedicated NVIDIA G-SYNC module that ensures flawless variable refresh rate performance for tear-free gameplay up to 175FPS.

FreeSync is supported over DisplayPort as well in case you have an AMD GPU, but not over HDMI. G-SYNC, however, works over HDMI too.

As it’s the case with all OLED displays so far, some near-black gamma shifts can be observed in dark scenes when using variable refresh rate. It’s more noticeable at 175Hz than 144Hz, but it only occurs in rare scenarios and won’t bother most users.

Overall, the combination of G-SYNC, 175Hz, instantaneous response time and imperceptible input lag provides you with an exceptionally responsive and enjoyable gaming experience.

Probably the most pleasant surprise to come from the Dell AW3423DW is the three-year warranty that covers burn-in, allowing you to game for hours without worrying about any static elements becoming permanently stuck on the image.

Burn-in and image retention are still possible, but as long as you use the monitor responsibly, it shouldn’t be an issue; don’t leave the screen enabled with a static image for too long and use the monitor’s built-in pixel and panel refresher features.

These features are enabled by default. After four to twenty hours of cumulative usage of the screen, Pixel Refresher will run for seven minutes once the monitor enters the power-saving mode in order to prevent image retention. Similarly, Panel Refresh will run after 1500 cumulative hours to prevent burn-in.

There’s also a built-in pixel shift feature. The monitor actually has a 34.18″ viewable screen and its 3440×1440 resolution occasionally moves a bit to prevent burn-in. This is normal and not noticeable during use.

An intuitive directional joystick is used for OSD navigation and for certain shortcuts. The menu is well-organized and offers plenty of useful features.

There’s an integrated light sensor that can adjust the monitor’s brightness according to ambient lighting, while the backlight of the monitor is flicker-free and a built-in low-blue light filter is available.

The Dell Alienware AW3423DW display also features the AlienFX lighting at four different zones (logo and ring at the rear, strip beneath the bottom bezel and the power button), all of which can be customized individually to shine in different colors and patterns.

You can make all of the RGB LED adjustments in the OSD menu or in the Alienware Command Center desktop application.

Next, the screen has a subtle 1800R curvature for added immersion and a semi-gloss finish; the screen is glossy with an anti-reflective treatment that prevents reflections without making the image as grainy as it’s the case with matte anti-glare coatings.

If there’s too much light directed at the screen, the coating will diffuse it thus making blacks appear grayish. So, for the optimal viewing experience, you’ll have to adjust the lighting in your room accordingly.

Overall, the coating makes the image much more vivid in comparison to standard matte anti-glare displays, but it’s not quite as clear as that of LG’s OLEDs; it is better at handling reflections though and as long as there’s no direct lighting in front of the screen, you’ll be fine.

Since the DisplayPort 1.4 input on the monitor doesn’t support DSC (Display Stream Compression) due to its G-SYNC module, there’s only enough bandwidth for 175Hz with 8-bit color or 144Hz with 10-bit color without resorting to chroma subsampling.

In truth, the difference between both 10-bit vs 8-bit color and 144Hz vs 175Hz is subtle in real use, so you can pick whichever you personally prefer. Most games in which you might actually notice improvements by 10-bit color are usually too demanding to be run at over 144FPS and high picture settings anyway.

There are two cooling fans, one for the panel and one for the G-SYNC module. Both are fairly silent, though it seems some units have louder fans than others. Most users won’t be bothered by them though.

The Dell Alienware AW3423DW goes for $1,300, which is quite reasonable considering its alternatives.

However, you should also check out the newer AW3423DWF version, which goes for $200 less. It uses the same panel but doesn’t have a G-SYNC module, so you get more features, including PiP/PbP, updatable firmware, one less cooling fan and a slightly slimmer design.

The Samsung Odyssey Neo G9 and the ASUS PG32UQX go for ~$2,000 – $3,000, yet they have inferior image quality and performance. Although some users might prefer their form factor, it’s hard to justify such a price difference. The Neo G9 can be found on sale for ~$1,500 though.

Related:New Monitors In 2023: What To Expect

In terms of picture quality and performance, the AW3423DW makes almost every LED-backlit gaming monitor over $1,300 obsolete.

Of course, if you prefer larger screens, LG’s 48″ OLED and 42″ OLED displays are still worth considering.

However, these OLED displays aren’t quite as bright and don’t have as wide color gamut, but be sure to check out our LG OLED42C2 and ASUS PG42UQ reviews for more information.

Mini LED monitors will have to be a lot cheaper in other to compete with the AW3423DW, and indeed we’re already seeing some improvements there.

There are also two 34″ 3440×1440 mini LED ultrawide monitors with 1152-zone mini LED FALD announced that’ll certainly have to be competitively priced too.

All in all, the Dell Alienware AW3423DW offers amazing image quality and performance for the price; you won’t be disappointed. However, you should definitely check out the newer AW3423DWF variant as well.