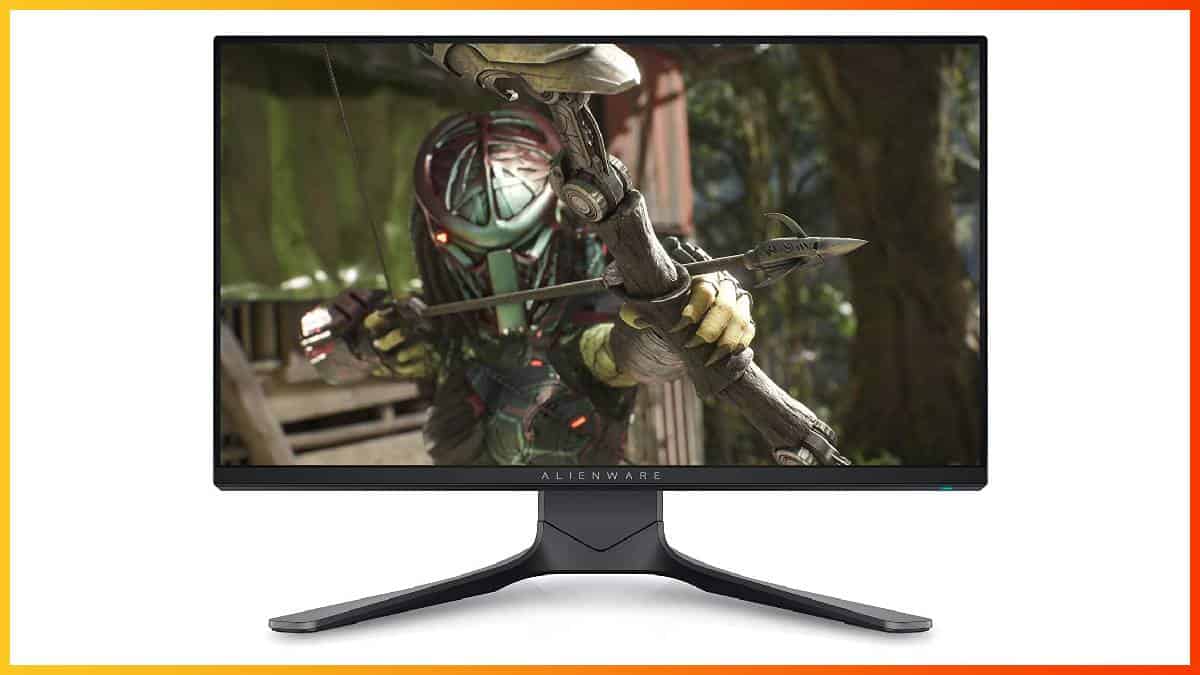 The Dell AW2521HF is an excellent gaming monitor for the price. Thanks to its 240Hz refresh rate, 1ms response time, and AMD FreeSync, it ensures buttery-smooth performance while its IPS panel offers vibrant colors and wide viewing angles.

Additionally, it offers a robust and versatile design as well as extensive connectivity options – all that for a rather affordable price!

The Dell Alienware AW2521HF is yet another 1080p 240Hz IPS gaming monitor with a fast 1ms response time speed and AMD FreeSync (certified as ‘G-SYNC Compatible’).

While it’s one of the most affordable 240Hz IPS models, it doesn’t have some extra features that the other alternatives offer, such as backlight strobing, HDR support, USB-C, etc.

So, if you’re wondering whether you should save your money and get the Dell AW2521HF or invest in one of the more expensive models, this review will cover everything you need to know!

Based on an IPS panel, the Dell AW2521HF monitor delivers accurate, consistent, and vivid colors covering the standard and most widespread sRGB color space with 99% sRGB gamut.

The colors will also remain flawless regardless of the angle you’re looking at the screen, thanks to the 178° wide viewing angles of the IPS panel technology.

Other panel-related specifications include a strong 400-nit peak brightness and a static contrast ratio of 1,000:1.

The monitor can get very bright, even for well-lit rooms, and you’ll want to reduce its brightness from the maximum.

A static contrast ratio of ~1,000:1 is standard for IPS monitors, which means that you won’t get as deep blacks as those of VA panel monitors, but these displays have disadvantages of their own such as a slower response time speed (at least at this price range).

Unlike some of the other 240Hz IPS models, the Dell AW2521HF does not support HDR (High Dynamic Range).

However, since you’d need a wider color gamut and a much higher contrast ratio and brightness for a noteworthy HDR picture quality (none of which is offered by the other 1080p 240Hz IPS models), you’re not losing anything important here.

Moving on, the Dell AW2521HF has a screen resolution of 1920×1080 pixels, which results in a decent pixel density on its 24.5″ viewable screen. You get 90 pixels per inch, which makes for sharp details and a good amount of screen space.

1080p is also not very demanding, allowing you to reach higher frame rates more easily for the best performance.

The Alienware AW2521HF has an exceptionally low input lag of only ~2ms, which guarantees that you won’t be able to notice or feel any delays between your actions and the result on the screen.

The Super Fast and Extreme modes are too aggressive; they push the pixel response time too much, which results in inverse ghosting or pixel overshoot.

Dell, just like other monitor manufacturers, had to create such strong and unrealistic overdrive modes to be able to advertise the ‘1ms GtG’ specification.

Regardless, the Fast response time overdrive mode works perfectly well. Although you’re not getting the advertised 1ms speed, nearly all pixels will be able to change in time with the monitor’s 240Hz refresh rate.

In some rare cases, dark pixels may not quite change into brighter shades in time with the refresh rate, which can result in visible ghosting behind fast-moving objects when dark pixels are predominant in the picture (dark scenes).

Luckily, this isn’t really noticeable while gaming unless you’re really looking for it by running various tests. In real use, you won’t be bothered by it.

Another thing to keep in mind about IPS monitors is IPS glow, which is an expected drawback of this panel technology.

The amount of visible IPS glow varies across different units of monitors, but in all except the most extreme cases, it’s completely manageable.

Lastly, the backlight of the Dell AW2521HF display is flicker-free, which, along with its integrated low-blue light filter, ensures a safe viewing experience for your eyes.

Once you enable this technology, the monitor will change its refresh rate according to your FPS thus completely removing screen tearing and stuttering with imperceptible (~1ms) input lag penalty.

For AMD cards, FreeSync works over both HDMI and DisplayPort whereas with NVIDIA cards, you’ll need to use DisplayPort and have a GTX 10-series or newer GPU.

The variable refresh rate range is 48-240Hz, but LFC (Low Framerate Compensation) is supported meaning that below 48FPS, the refresh rate will be multiplied (for instance, 47FPS x 5 -> 235Hz) for smoother performance.

One feature that is missing on the Dell AW2521HF which is present on some of the other models is a Motion Blur Reduction (MBR) technology that can reduce perceived motion blur by backlight strobing.

Many gamers don’t use this technology as it introduces screen flicker and reduces the monitor’s maximum brightness while active which makes the picture dimmer. It also can’t work at the same time as FreeSync/G-SYNC.

As an exception, the ViewSonic XG2431 offers an impressive MBR implementation. So, if you’re after CRT-like motion clarity, you should definitely check it out.

In case you just want to run your monitor at a fixed 240Hz refresh rate or with FreeSync/G-SYNC, the Dell AW2521HF will do just fine!

Next, the OSD (On-Screen Display) menu of the monitor offers plenty of useful features such as pre-calibrated and customizable picture modes, a timer, a refresh rate tracker, and Dark Stabilizer for better visibility in darker games.

At the back of the monitor, there’s a joystick for easy navigation through the menu as well as four additional hotkeys for shortcuts which you can assign yourself.

As it’s the case with most Alienware gaming monitors, the design has a sci-fi vibe with a premium build quality and the AlienFX RGB lighting technology with plenty of customization.

Finally, the screen has a 25% low-haze matte anti-glare coating, which eliminates reflections without making the picture appear too grainy.

There’s also the Dell Alienware AW2521HFL model with a different color scheme (‘L’ stands for ‘Lunar Light’ whereas the AW2521HF model has the ‘Dark Side of the Moon’ theme).

The price should be the same for both models, though it can vary depending on your region.

The Dell AW2521HF is available for ~$300 at the time of this writing. The Dell S2522HG, based on the same panel goes for $250 on sale, making it an even better deal as the image quality and performance is basically identical.

For more information, be sure to visit our comprehensive and always up-to-date best gaming monitor buyer’s guide.

The Dell Alienware AW2521HF is an amazing monitor for competitive gaming, but you should also check out its alternatives before buying.